The charm of the nature reserve Calanchi di Atri: between reality and legend.

In the heart of the Abruzzo region there is one of the most fascinating and characteristic places in Italy, one of the most popular destinations for hiking and trekking lovers. The Regional Nature Reserve "Calanchi di Atri", was established in 1995 and in 1999 became a WWF Oasis with the aim of preserving about 600 hectares of nature, flora and fauna.

The charm of the nature reserve Calanchi di Atri: between reality and legend

Let's start by saying that the reserve, thanks to its characteristics, is a real miracle of biodiversity, despite the external appearance that could suggest a scarce presence of plant species, you can find the wild Gladiolus, capers, and licorice. The reserve is extended well beyond the formation of gullies, and you can also find willows, white poplar, elder and vitalba.

The habitat is ideal for birds of prey, in fact, several pairs of buzzards, kestrels and sparrowhawks are nesting. It is also possible to find, also thanks to the proximity of several ponds and the Piomba torrent: Mammals: foxes, badgers, moles and hedgehogs, porcupines and the dormouse; Birdlife: beyond the above mentioned birds of prey is a resting and resting place, of different migratory species; Reptiles: the collared snake, the brain snake, the orbit and others more common as the field lizard, and the lizard; Amphibians: several species of frogs and salamanders, as well as the rarer emerald toad.

The landscape, so suggestive, was created by the erosion of the clayey soil, caused by the continuous desiccation and flow of uncontaminated rainwater. It is one of the most fascinating forms of the hilly landscape with a high percentage of sand and rich in marine fossils whose shape is changing and constantly evolving according to the runoff of water that flows through it.

But in addition to its natural characteristics, the reserve also gives us stories about the legendary and the sacred: such as the case of the mystery surrounding the "Pietra di S. Paolo". It is a block of miraculous stone, kept inside a small chapel that according to legend seems to be the stone on which St. Paul the Apostle was beheaded and which has the power to heal bone malformations. We would also like to remind you that one of the peculiar characteristics of this place are the "houses in terra cruda or pingiare", whose ruins are still visible and represent the testimony of a very bare architecture. The material used to make the bricks of the houses was clay, which was then baked, but because of the economic poverty of many inhabitants, a different solution was sought. This new technique was developed, that is to say the mixture of raw clay, waterproof and flexible, with straw, stones, broken bricks and other materials, until regular blocks were made. 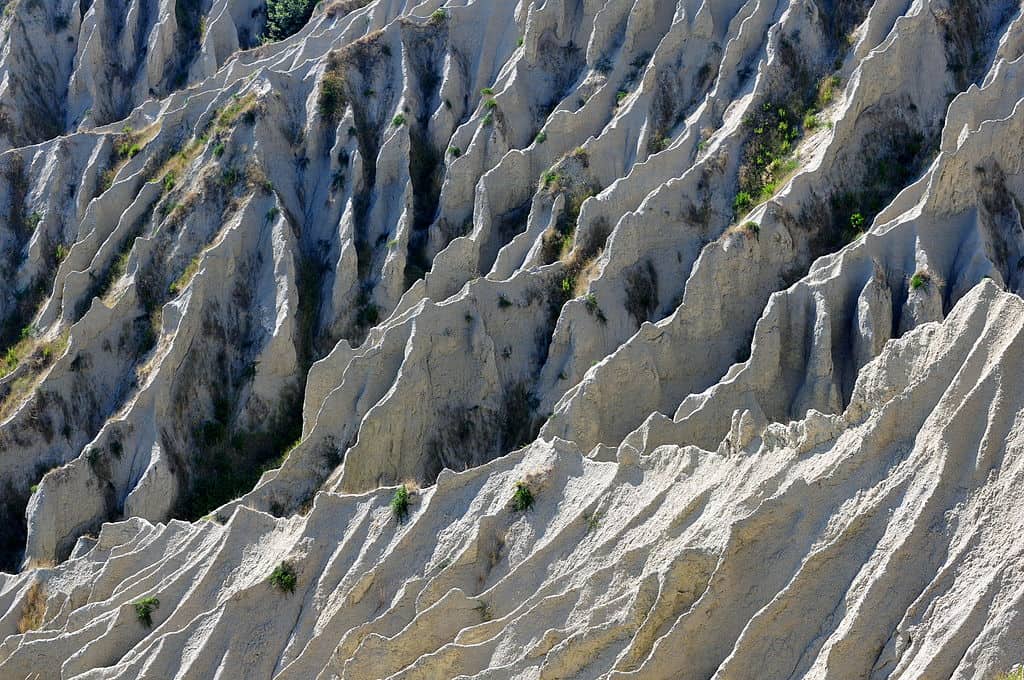 One of the many typical features of the reserve is that it contains forms of erosion that take on an impressive appearance here: the calanchi.

The biodiverse and geodiverse characteristics of the gullies give the agricultural landscape its unique character, making it an area of national interest and preserving one of the most fascinating forms of the Adriatic coastal landscape.

This millenary process of erosion has contributed to the "building" of natural architectures known to most people as "Dantesque Bubbles" or "Devil's Bubbles".

To visit the reserve we recommend comfortable clothing, hiking or tennis shoes, sun hat and a water bottle.

It is preferable to visit the reserve in periods of the year when the climate is temperate, perhaps avoiding the summer heat or the hottest hours of the day.

Finally, we remind you that there is no ticket to buy, the entrance is free.