The Aurunci Mountains are a mountain group in Lazio, characterized by spectacular landscapes. Among the most beautiful places is the Ulysses Riviera: a real balcony overlooking the sea.

The Aurunci Mountains are one of the mountains group of central Italy, more precisely they are located in the southern area of Lazio and overlook the Tyrrhenian Sea.

The area is protected by the institution of the Monti Aurunci Regional Nature Park, which is part of the system of protected areas of Lazio and has more than 50 areas, spread over 19,375 hectares of land; the entire area of the Natural Park extends in fact in ten municipalities: six in the province of Frosinone and four in the province of Latina.

The various areas of the Park are divided into reserves and natural monuments and can be crossed and known with special tours, hiking guides or mountain biking, so you can get in touch with nature in the ways and times you want.

The Mountains Aurunci Regional Nature Park is just a few kilometers from the coast and is close to a charming balcony on the sea called Ulysses Riviera.

The Riviera of Ulysses 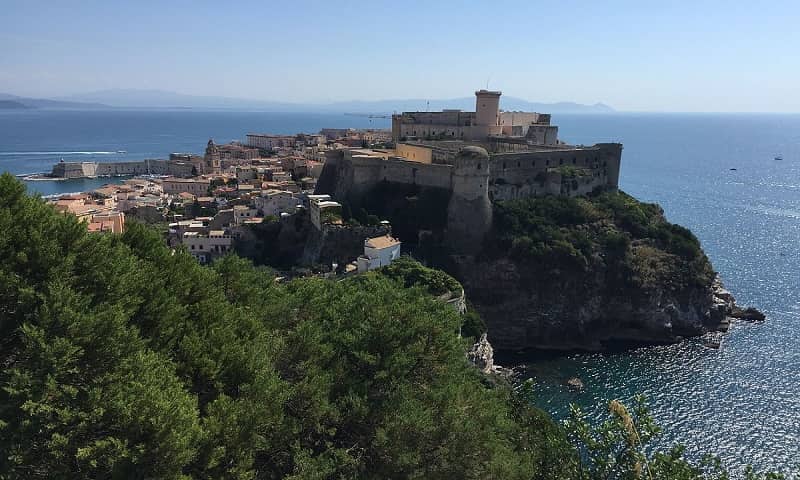 The fascinating Ulysses Riviera is located south of the province of Latina and can be considered as one of the most evocative and relaxing places in the world that extends from Gaeta to Formia, passing through Sperlonga and many other lovely places.

The Regional Park of the Ulysses Riviera, which became a protected area in 1986, offers many places of interest scattered over 100 km, each of which is characterized by fabulous scenery, which enchant tourists, trekking enthusiasts, hikers and lovers of the sea.

Among the places not to be missed there is definitely the Villa of Tiberio and its cave, Mount Orlando and the Split Mountain and San Felice Circeo.

The Villa of Tiberius and its cave

The remains of the Villa of Tiberio extend for 300 meters on the beach of Sperlonga and together with them you can admire a suggestive cave 33 meters deep.

The complex dates back to the first century A.D. and is entrusted to the Archaeological Museum of the Villa of Tiberio.

Arriving near the Museum you can walk among the huge marble statues representing Ulysses and his memorable actions, then you start on a path that leads to the excavations of the villa and the cave, which remains the most interesting and fascinating area.

Within the territory of Gaeta lies Mount Orlando, which represents the terminal part of the Aurunci Mountains. It covers 89 hectares and the land with the sea are connected by a thin strip of land and ends in the southern part with a fascinating cliff. The view that you can enjoy from the top of the mountain is spectacular.

The Mount has been shaped by the sea over the years, in fact have been created sea caves and cliffs that reach up to 150 meters. Inside the rocks it is possible to observe well visible fossil remains.

The WWF manages the marine oasis in front of Mount Orlando, rich in species such as sea urchins, starfish, molluscs, seahorses, crustaceans and so on.

Legend has it that when Christ died and the temple of Jerusalem was torn apart, in the same way the earth shook also in Gaeta, precisely on a mountainous stretch of Mount Orlando three fissures were opened in the rock, thus creating the Split Mountain.

Every year thousands of pilgrims and tourists visit the Split Mountain and the small chapel dedicated to the Crucifix near it, remaining surprised by the surreal atmosphere that you breathe in that environment suspended between sky and sea. San Felice Circeo is a small village with about 10,000 inhabitants, but despite its modest size, it is rich in things to see.

The old town, built on the ruins of the ancient Roman colony, is structured as a small medieval corner, with small streets and many views from which to observe the sea and the splendid panorama. The Via del Faro is the most famous street, as walking on the cliff you then get to the precipice, characterized by a breathtaking view; the iconic symbol of the country is the Faro of Capo Circeo.

In San Felice Circeo trekking and hiking are very popular, as they allow you to enjoy spectacular views and views. Many tourists prefer days of total relaxation, beach and sea, to disconnect from everyday life and benefit from the crystal clear water of the stunning landscape.