The 9 most beautiful rivers in Italy

Although small in size, Italy is criss-crossed by a large number of waterways. Rocky mountains, fairy-tale valleys and cities of art are crossed by spectacular rivers that contribute to the immortality of the landscapes they are part of. Let's set off together on a journey through Italy's most beautiful rivers.

The Arno is the main waterway in Tuscany and one of the most important in Italy. The river flows through the city of Florence, and its fame is closely linked to the historic bridges over it, the most recognisable of which is undoubtedly the Ponte Vecchio. About 241 kilometres long, the Arno rises on Mount Falterona and flows into the Ligurian Sea. Since ancient times, the Arno has been a transit route for traders of timber from the Apennines, as well as an important source of energy for Florence between the 12th and 14th centuries. From the waters of the river it is possible to admire the architectural beauty of Florence and relive the history of the Tuscan city. The Arno also flows through other important towns such as Empoli, San Miniato, Pontedera, Cascina and Pisa. 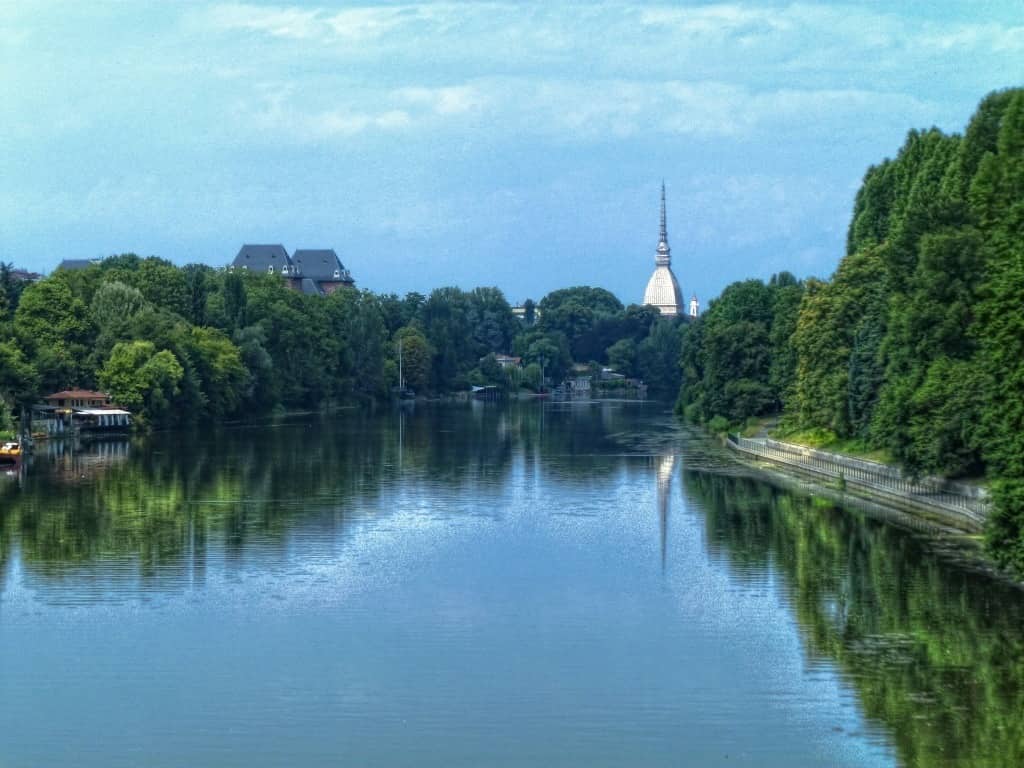 Italy's longest and widest river, the Po is undoubtedly the country's most famous waterway. It originates in Piedmont and washes many cities including Turin, Piacenza, and Cremona. The Po marks the border between Lombardy and Emilia Romagna, and between the latter and Veneto, and flows into the Adriatic Sea. The Po is undoubtedly the most important river in Italy and has played a leading role in the socio-economic development of the country since ancient times. For most of its course, the Po flows through the Po Valley, whose name derives from Padus, the river's Latin name.

The Adige River flows through north-eastern Italy for about 410 kilometres. It originates in the Upper Venosta Valley and flows near the municipality of Chioggia after passing through the cities of Trento, Rovereto, Verona, Legnago, and Cavarzere. Both flat and mountainous areas are crossed by the Adige, which along its course is flanked by rich vegetation that includes deciduous trees and shrubs. 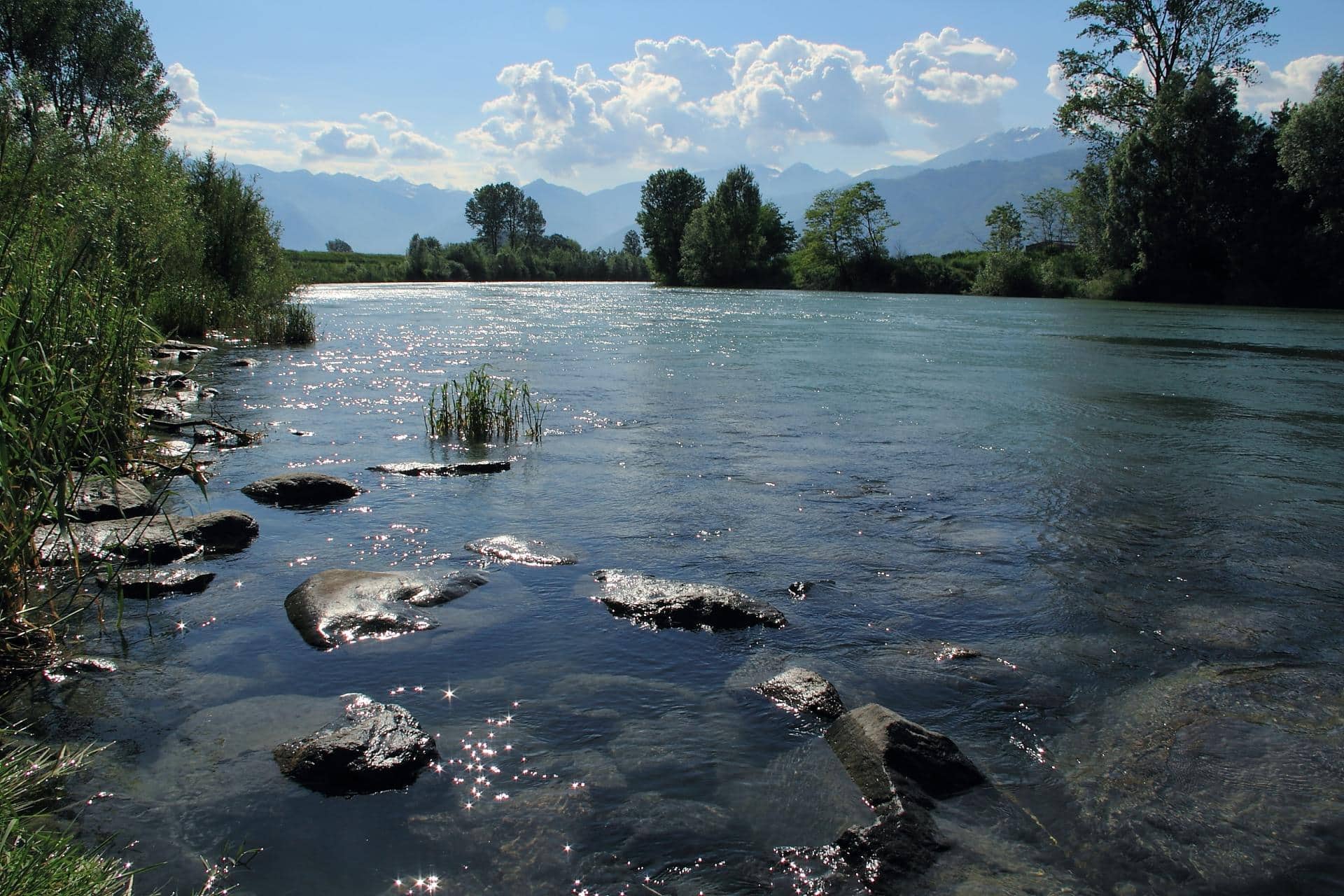 The river Adda is entirely within Lombardy. It rises in the Rhaetian Alps and flows into the Po, of which it is the longest tributary. It flows through a large number of Lombardy towns including Sondrio, Lecco, Como, Monza, Milan and Lodi. The importance of the Adda lies in its spectacular landscapes, which make it one of the most important Italian rivers. It flows through the Stelvio National Park and the Leonardo da Vinci Ecomuseum. As well as being a river of considerable environmental importance, the Adda has played a fundamental role in the history of northern Italy. In the Longobard era, it was the border between Austria and Austria, in the communal era it was witness to numerous wars and from the 13th to the 17th century, it was the border between the Duchy of Milan and the Republic of Venice. 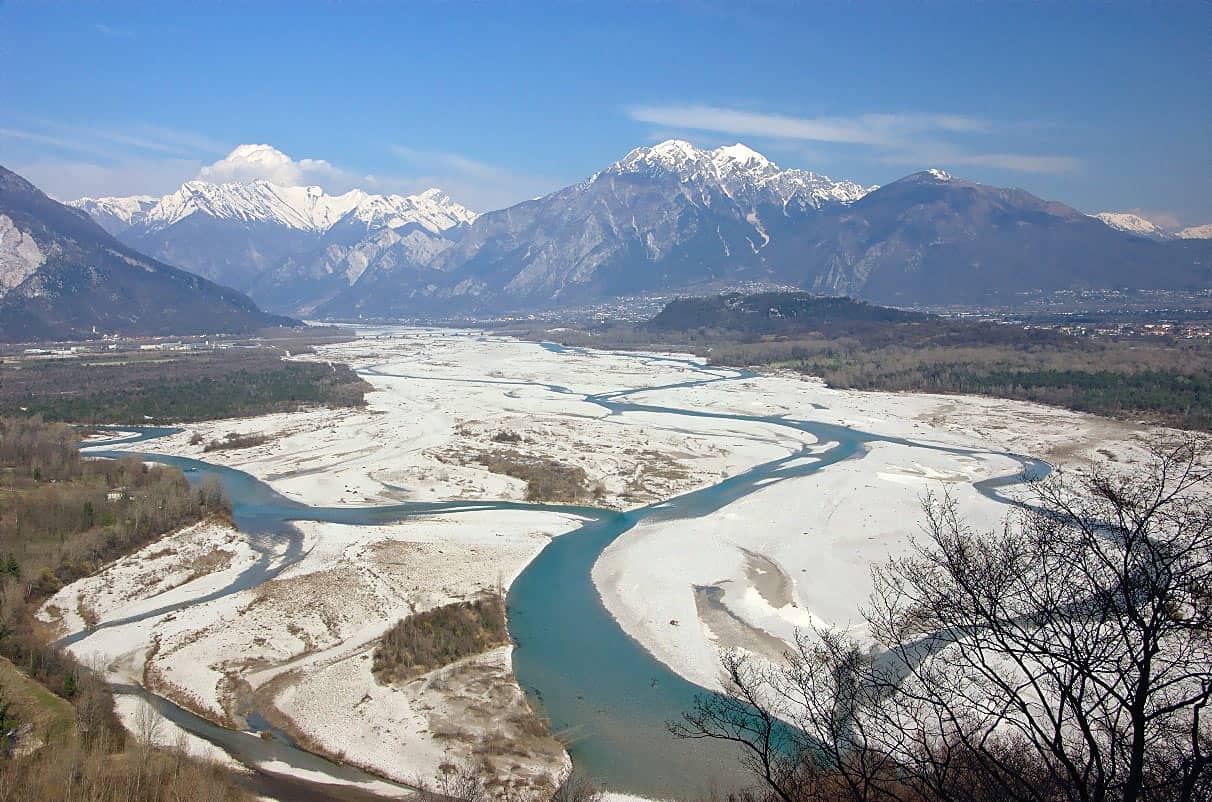 One of the few rivers in Europe to preserve its ancient morphology of intertwined channels, the Tagliamento is the most important waterway in Friuli-Venezia Giulia and one of the most spectacular river systems in the Old Continent. It flows through the Alps and the Carnic Pre-Alps. According to a large number of scholars, the Tagliamento represents an extremely precious ecosystem, being considered one of the few rivers in the world whose course has not been modified by the hand of man. 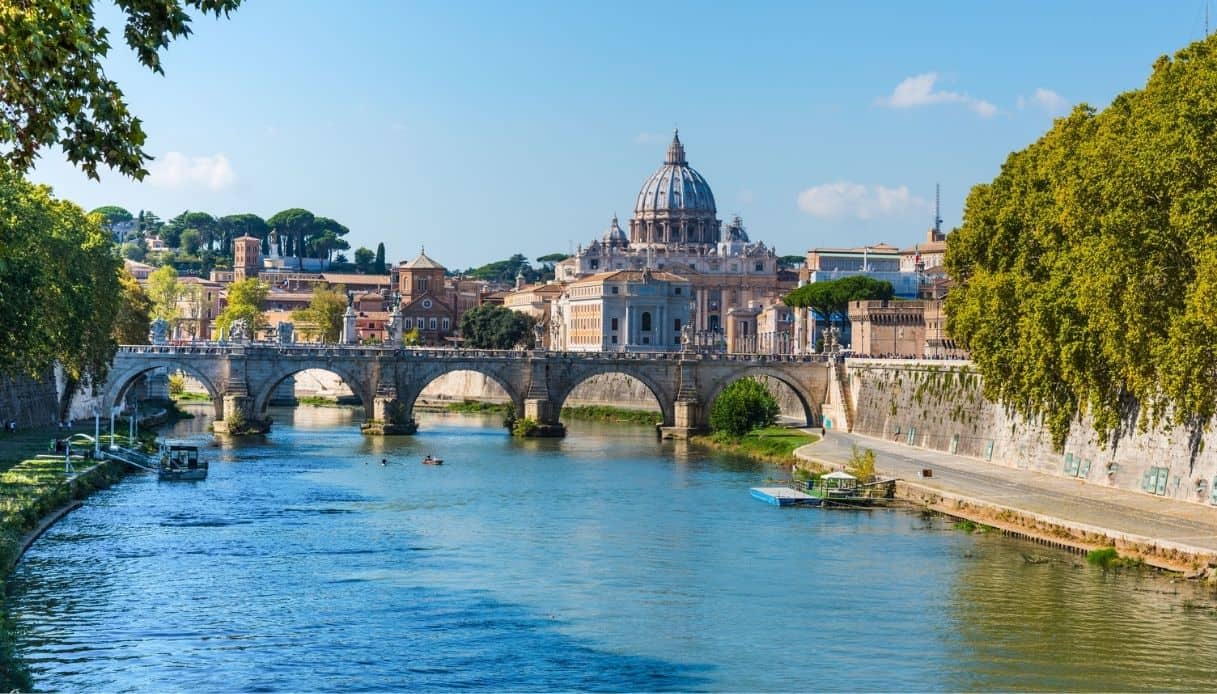 The river on whose banks the Eternal City was built, the cradle of modern civilisation and the scene of many legends. Inextricably linked to the city of Rome, the Tiber bisects Italy's capital city, crossing four regions, 7 provinces and 82 municipalities. It is considered the most important canal in central Italy. The birth of Rome is due to the nearby presence of the Tiber, which allowed the original rural village to develop into the city that has made history. A large number of monuments, squares and symbols of the city are reflected in the waters of the Tiber. A walk along the river is one of the most spectacular activities in Rome.

The Metauro is the main river of the Marche region and is 121 kilometres long. Its name derives from the fusion of the names of the torrents that originate from it: the Meta and the Auro. Over the centuries, the Metauro has been the preferred route between Rome and the Adriatic coast. It was here, in 207 BC, that the bloody Battle of the Metauro took place, in which the consuls Marcus Livy Salinator and Gaius Claudius Nero faced Asdrubal Barca, Hannibal's brother. The Roman army won the battle, which proved decisive for the control of Italian territory. 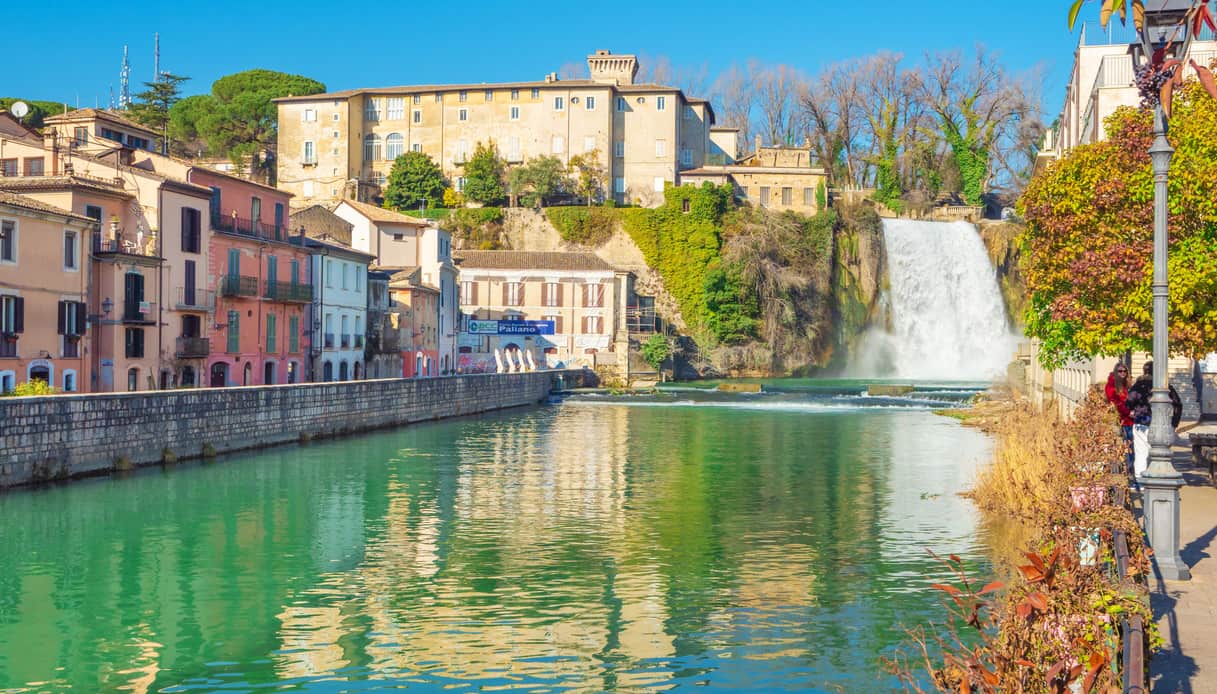 Abbruzzo, Lazio and Campania are the regions washed by the River Liri. The watercourse rises in Abruzzo from Monte Camiciola and flows into the Garigliano river. Near Sora, the Liri gives rise to two forks that surround the historic centre of Isola di Liri. Here there is a 25-meter high waterfall that forms the backdrop to one of the most fascinating natural attractions in the province of Frosinone. A fairytale landscape that deserves to be admired and photographed. 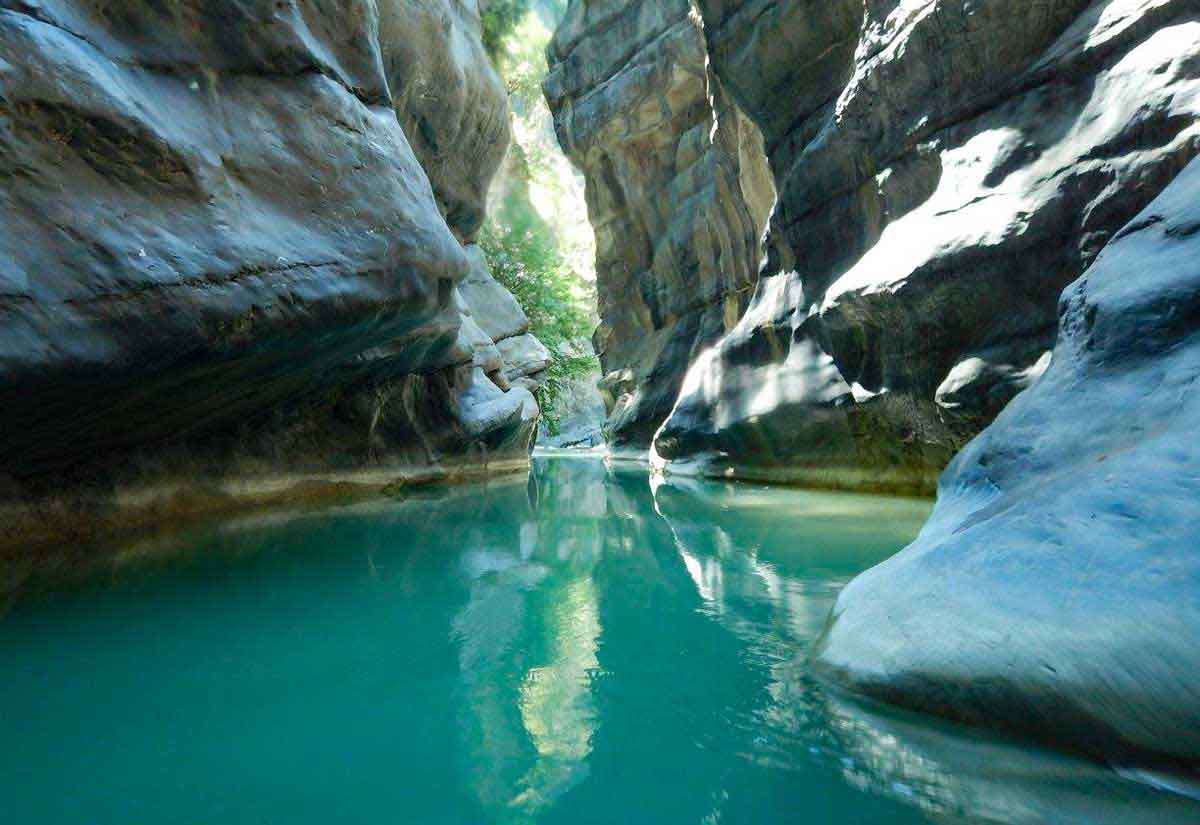 The Raganello is a torrent in Calabria. The particularity of the Raganello lies in the rocky gorges crossed by the river. The caves are part of the Raganello Gorge Nature Reserve, which can be explored on a guided tour. A real canyon divided into two parts, the High Gorges and the Low Gorges, which in the final part flow into the Raganello basins. Thousands of visitors come to the Raganello gorges to practice trekking or hiking activities that require great preparation and suitable equipment.