The 5 most famous arcaded cities in Italy

The arcades are an exciting feature of some Italian cities' civil architecture, renowned above all for this peculiarity. Many towns have got a street, a road, or a main arcaded street in their historic centre: in particular, there are places in the north-west of Italy, characterised by a higher rainfall index than in southern Italy and therefore able to guarantee shelter for citizens which, however, could reach their destinations without being dependent on climate change. This article will discover the five most beautiful arcaded cities in Italy, characterised by many kilometres that the arcades cover. Bologna is undoubtedly the most famous arcaded city in Italy. Bologna has 53 km of arcades (38 km only in the historical centre) and excels not only in Italy but also in the world. There is no other city in the world with so many arcades as Bologna, which is why the Bolognese arcades are candidates to become a recognised UNESCO World Heritage Site. The arcades' origin is very curious: during the medieval era, people were looking for a way to expand residential and commercial spaces, given the flow of people who moved towards Bologna due to the birth of the university. The solution was to create additional spaces by extending the buildings outwards, starting from the houses' first floor. Pillars supported the protrusion made, and consequently, an entrance was born from a succession of pillars. Initially, these building decisions were abusive, but about 100 years later, a law obliged to build houses with a porch and remedy existing houses without a porch. The city of Bologna recognised the usefulness of shelter in case of rain and sun. The arcades were essential also for the commercial possibility of exhibiting the merchandise and even its shops: moreover, there was also the possibility of finding shelter if impossibility returned home. 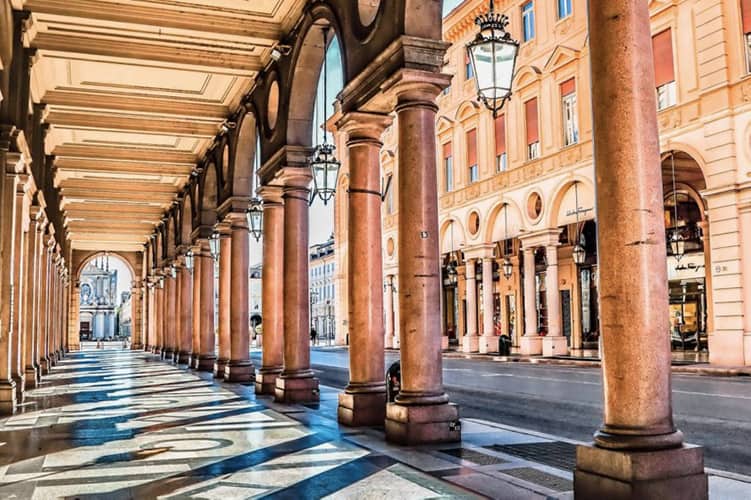 With its 18 km of arcades, Turin is the second Italian arcaded city for the number of arcades. Like in Bologna, some of Turin's arcades have medieval origins, but the monumental ones and therefore the most elegant ones originate around 1600 at the behest of the House of Savoy. The latter had a dual function: to allow the nobility to walk away from excessive heat and rain and embellish the city's face. Under the Turin arcades, of great width, there have always been shops and points where you can taste the city's specialities.

Several sources define Padua as a city with over 20 km of arcades inside the historic centre; other sources claim that they are about 12 km long. Regardless of the actual extension, certainly, Padua falls into the top 3 of the arcaded cities in Italy, also having the particularity of possessing unique characteristics, such as the diversification of the same arcades built according to different architectural styles: visiting Padua, you will find arcades in Romanesque, Gothic, Renaissance style, neoclassical and even modern. Another noteworthy feature is the possibility of seeing a good part of the arcades enriched by interesting paintings and sculptural motifs. 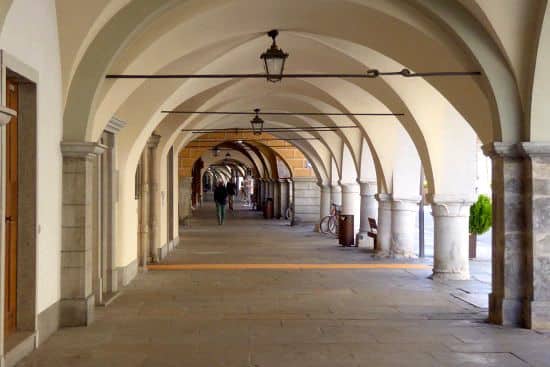 Cuneo has about 8 km of arcades dating back to various eras (from the Middle Ages to the Baroque Age), concentrated in the city's historic centre. Today it takes the name of Via Roma or the main street has masonry arcades on both sides, which have been redeveloped over the years to bring them to their initial splendour and make them consistent with the houses above them. In Cuneo, like the other cities, the arcades were born for shelter reasons due to climate change (rain, snow, hail, or as a shelter from the sun). 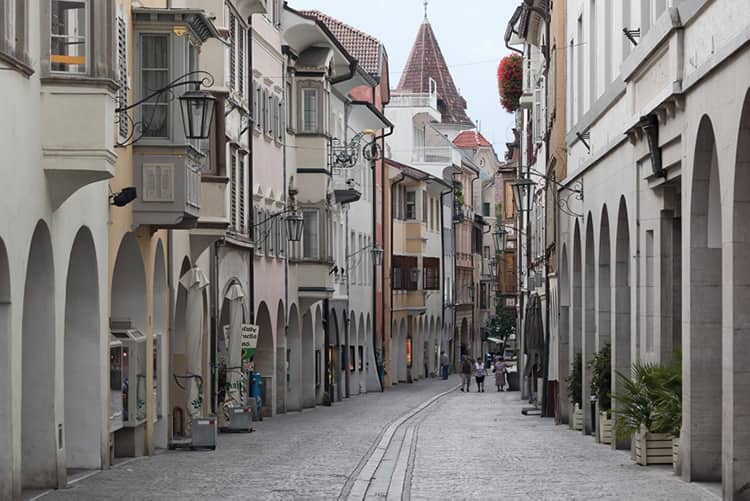 As in Cuneo, in Bolzano, you will find arcades along the main road: with the name of Via dei Portici (or Lauben), it's the oldest street in the city and also the heart of the city trade, given the presence of shops for centuries. The urban nucleus of Bolzano was built in the late 12th century starting precisely from this road, about 300 meters long, and the houses were built above the arcades specifically to allow merchants to display their goods sheltered from the weather.