The 10 most beautiful mountain destinations in Italy

Visit Italy takes you on a tour of some of Italy's most beautiful mountain locations. Join us on this high-altitude itinerary across the Boot. We'll assume you to high glaciers, medieval villages and even magical forests.

Braies is a wild card destination to discover all year round in the heart of the Fanes-Senes-Braies Nature Park. The valley extends close to the famous Three Peaks of Lavaredo and is immersed in a picture-postcard landscape where you can enjoy excursions among the characteristic farmsteads and picturesque villages, mountain biking, paragliding, horse riding, or climbing along with the classic Dolomite via "ferrata" routes. The view of the Three Peaks is enchanting and can be enjoyed on a hot-air balloon flight. One of the highlights of this UNESCO World Heritage area is Prato Piazza, an incomparable panoramic terrace at 2,000 metres above sea level. In winter becomes a destination for cross-country skiers. Finally, don't miss the very popular (and super "Instagrammable") Lago di Braies, the most visited body of water in the Dolomites, especially in summer. It is best to plan an early morning or sunset excursion to get the most out of it. You can reach the valley on foot, by bike or by public transport. If you prefer to use your car, you will need to book a parking space in advance or obtain a transit permit. 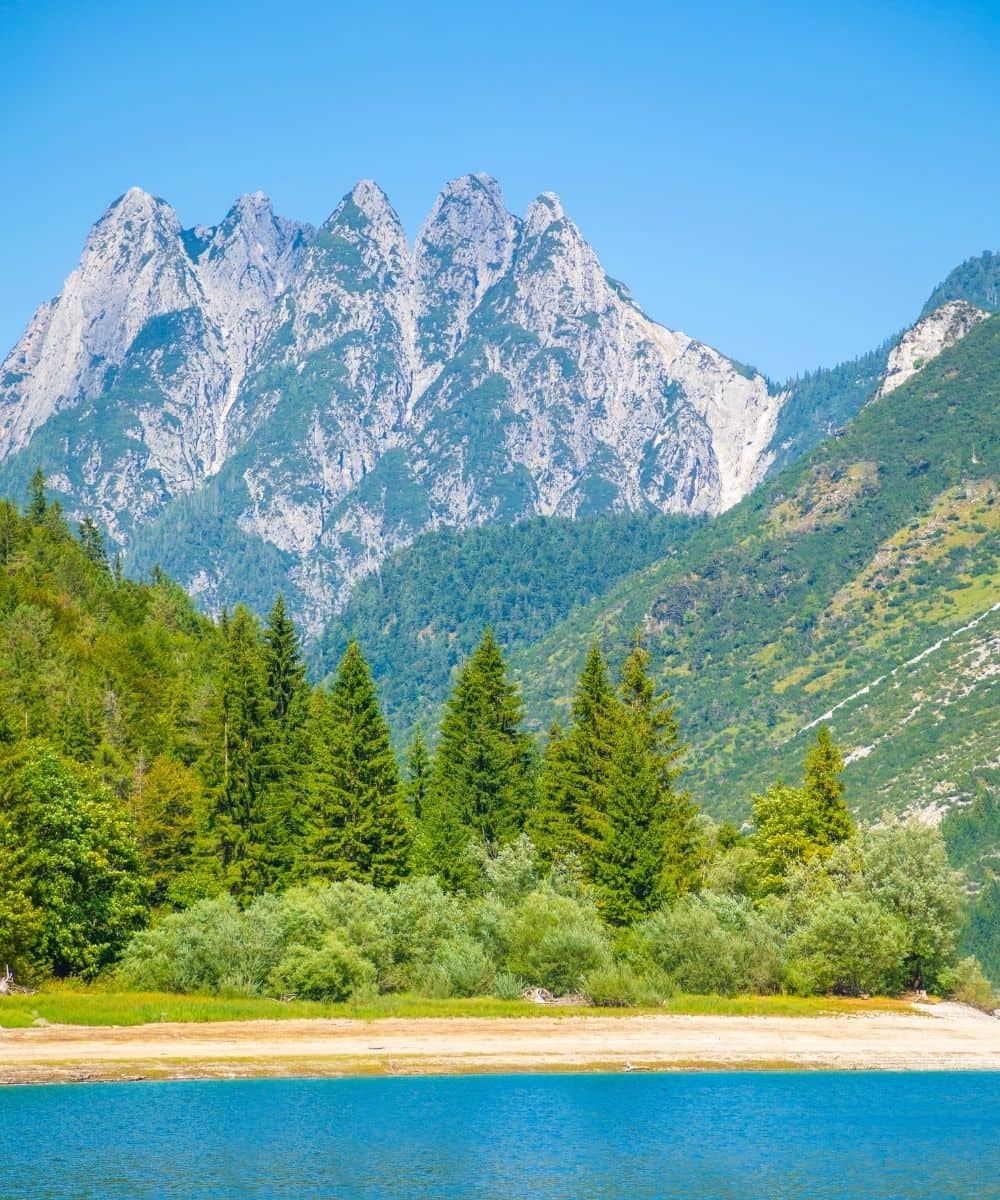 Tarvisio is the largest municipality in Friuli Venezia Giulia and is located in the Val Canale, at an altitude of 755 metres above sea level. The area also encompasses the surrounding territory (the so-called Tarvisianio). It offers hikers a diverse but always magnificent landscape in which it will be easy to find and experience suited to one's ropes. What to do? Here are some suggestions: rafting, kayaking, surfing, scuba diving or canoeing on Lake Prediligerono, Nordic walking, paragliding, bungee jumping, paintball, downhill (you launch yourself downhill on dirt tracks with a mountain bike, adrenaline guaranteed), golf and much more. Tarvisio's gastronomic tradition is influenced not only by Friulian but also by Slovenian and Austrian cuisine. Try szegediner, the typical pork goulash prepared in these parts, and sasaka, a spreadable paste used to prepare aperitifs and first courses.

Famous for its ski slopes on the border between Italy and France, outdoor enthusiasts will appreciate La Thuile's sumptuous nature during the summer. The municipality of the same name is the starting point for a vast network of itineraries in the shadow of Europe's highest peaks. If you want to explore the area's most evocative spots, hire an Alpine guide. Those who are more experienced will climb to over 4000 metres and admire the thousand-year-old jacques. The spectacle you will see during your stay in La Thuile will captivate you. Here are a few stops not to be missed: the Rutor waterfalls, Lake Varney, the Youlaz and Orgères valleys, the cryptic Cromlech (a very ancient circle of 46 stones which testifies to the presence of man in the area in pre-Roman times) and the itinerary along with the old coal and silver mines. In summer, you can experience local traditions by enjoying the solstice at the Petit St Bernard Cromlech, the Fête des Bergers (held every two years on the Sunday after Ferragosto) and the St. Margaret festival at Rutor.

Located at 2,035 metres above sea level, Sestriere is the highest municipality in Italy and lies between Val di Susa and Val Chisone. Despite its small size (2,590 hectares and less than 1000 inhabitants), Sestriere is popular with tourists all year round. It is a popular destination during the winter season for its ski slopes (it is one of the ski resorts that has hosted the most titled competitions ever). Still, it is also possible to practice this activity during the summer months due to glaciers. Go snowshoeing, climb along frozen waterfalls or try ice skating. Consider a guided night hike and, if you prefer to relax, there are numerous wellness centres in the area. The Sestriere hill is surrounded by three natural parks, a splendid example of the rich ecosystem of this Alpine foreshortening. 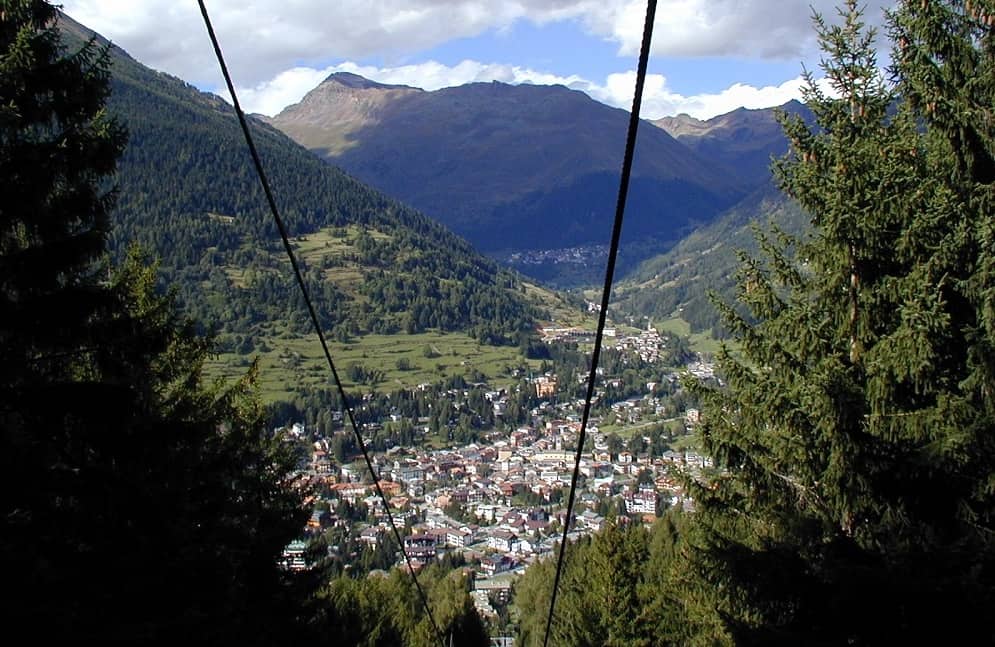 Ponte di Legno, in the province of Brescia, is a historic destination for mountain tourism. It is located at the northern end of Val Camonica at an altitude of 1258 metres. In 1912 the Italian Touring Club described Ponte di Legno as the "first Italian winter sports and tourism resort", and it is to sport, and skiing in particular, that this small village in the Alps owes part of its fame. Among the most fascinating architecture to visit in the area are the 1685 Church of the Holy Trinity, the Church of Sant'Apollonio, one of the oldest in Val Camonica, and the Castle of Castelpoggio. The summer excursions through the woods and lakes of the area are very pleasant. You can choose from 18 itineraries of varying difficulty and extension, from low-altitude walks to more challenging trails.

The Laceno plateau is located 1050 metres above sea level in a beautiful landscape in the Picentini Mountains in the province of Avellino. Woods, streams and a romantic lake frame this southern Italian ski resort, which with its 16 kilometres of slopes is a particularly popular destination for winter sports enthusiasts. Laceno is also home to the Caliendo Caves, which can only be visited in summer. If you plan to hike in this area, there are various alternatives. The hilly route does not involve great differences in height and connects the village of Bagnoli with the Laceno plateau. The river routes are more demanding but offer a unique panorama in southern Italy. The itineraries leading to the mountain peaks (including Monte Cervialto, Monte Rajamagra and Mote Piscacca), on the other hand, require greater preparation and the ability to tackle more difficult paths. The plateau is home to several accommodation facilities and restaurants where you can taste typical local products, such as the black truffle of Bagnoli Irpino, provolone podolico and bagnolese pecorino.

4. Park of the Ligurian Alps, Liguria

Liguria is one of those places that just the mere mention of its name immediately conjures up a clear-cut landscape image. Thanks in part to the recent success of the Disney Pixar animated film Luca, the association with idyllic villages and picturesque architecture overlooking the sea is easy to make. But the region has much more to offer. The Regional Natural Park of the Ligurian Alps combines the alpine environment with the most traditional Mediterranean atmospheres in 2000 metres of altitude and 60 square kilometres spread over three valleys (the District of the Nervia Torrent, the Upper Argentina Valley and the Upper Arroscia Valley). It is a territory of great biodiversity: from flower cultivations, olive groves and vineyards to chestnut, conifer and beech woods. Not only nature, but also history and culture: the seven municipalities of the park - Rocchetta Nervina, Pigna, Triora, Montegrosso Pian Latte, Rezzo, Mendatica and Cosio d'Arroscia - will welcome you with their traditions.

A wild and magical place is hidden in the heart of Italy, between the Marches and Umbria, a place where history and folklore are at one with the lush and untamed nature of these lands. The Parco dei Monti Sibillini is a vast area with twenty peaks over two thousand metres above sea level. Mount Vettore stands out with its 2,476 metres. Since the Middle Ages, this itinerary has been shrouded in legends about the mythical sorceress Sibilla, the Valle dell'Infernaccio and Lake Pilato. There are various ways to experience the park, depending on whether you prefer to travel by car, bicycle, motorbike, or foot. You will come across centuries-old villages, mountain villages, ancient sanctuaries, monastic complexes and enchanting blooms (the colourful one on the plain of Castelluccio di Norcia is very famous from May to July).

Scanno is a small jewel in the Abruzzo National Park. Very few inhabitants (less than 2,000) and a genuine and authentic atmosphere that can be breathed among the small streets that unravel in characteristic ups and downs between the typical stone buildings and balconies with flowers of the houses. The territory of Scanno lies between 950 and 2250 metres above sea level: it is immersed in the greenery of the Apennines. Visit the churches of Santa Maria della Valle and Sant'Eustachio, the Sarracco Fountain and the Wool Museum. Don't forget to stop in one of the village's crafts and goldsmith shops. And if you're passing through in autumn, watch the traditional feast of the Glorie di San Martino on 10 November, with the historic and exciting competition between the three main districts of Scanno.

A village with ancient roots, a prestigious sports resort and a destination par excellence for glossy tourism, Cortina d'Ampezzo is the Queen of the Dolomites and is preparing to host the 2026 Winter Olympics together with Milan. Cortina is the ideal destination for looking for a glamorous and relaxing holiday or a dynamic and adventurous one. The 400 kilometres of trails surrounding the area will be the perfect setting for your treks. From the town centre, a cable car will take you up to Mount Faloria. From here, you can start your descent into the valley along a charming and easy route, or climb the equipped wall of the Crepo Longo rocky ridge. The local cuisine mixes Italian and Tyrolean flavours: spätzle, barley soup, goulash, and buckwheat cake are some of the dishes you can enjoy in Cortina's restaurants, "malghe" (cosy mountain huts) and refuges.