From rubble to splendour. How did a small area of Sicily devastated by earthquakes become one of the world's most magical places?

The year zero is 1693. On 11 January, a devastating earthquake razed more than 2,000 years of Greek, Byzantine, Arab and Norman history to the ground. What followed was a glorious reconstruction that in just 50 years turned this area, and the Val di Noto in particular, into a treasure trove of refined beauty.

The new buildings had such a distinctive style that it needed a new terminology, late Sicilian Baroque, a UNESCO World Heritage Site that anyone should see at least once in a lifetime. See where? For starters, here are seven places to mark on your map.

7. Syracuse and Ortigia, in the heart of Magna Grecia It may not be one of the famous late Baroque Unesco sites in the Val di Noto, but Syracuse is a destination that cannot be overlooked on a trip to this corner of Sicily. Starting with Ortigia, the ancient Greek colony from which it developed.

The white city of Sicily, so nicknamed because of the colour given by the typical sandstone from Syracuse used in the buildings, condenses millennia of history, from the Greek era to the rich Baroque decorations.

Definitely, something you don't want to miss. Here are a few tips to jot down and take with you on your next trip to be sure not to cut out the highlights.

Your tour of the Baroque streets must necessarily lead you to Piazza Duomo, one of the most striking squares not only in Syracuse but in the whole of Sicily. Look around and take in the 18th-century Palazzo Vermexio, the elegant Palazzo Beneventano del Bosco, the Bishop's Palace and the church of Santa Lucia alla Badia. Step through its Baroque portal and find an unexpected surprise: a 1608 painting by Caravaggio, The Burial of St. Lucy.

The first thing to catch your eye will most likely be the Cathedral of Syracuse, a place of worship for the last 2500 years. You can guess its past as a 5th-century B.C.temple dedicated to Athena from the columns incorporated into the internal naves as well as along the outer sidewall.

6. Catania, the city at the foot of Mount Etna 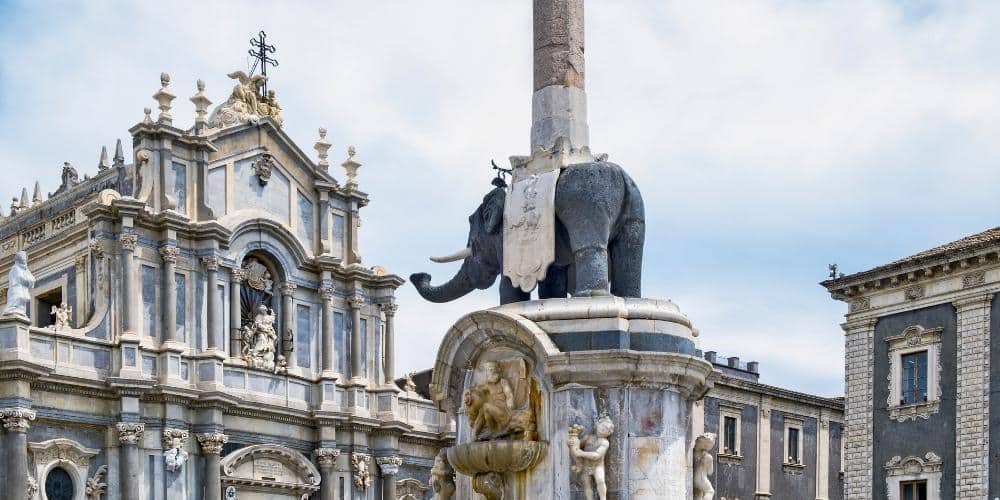 Catania is a volcanic city, and for better or worse, the volcano is present in all its facets. It is in its name (from Greek words katà and Aitné, "leaning against Etna") as well as in its buildings, dark with lava stone. Even in food: arancini, the famous snacks, are female (le arancine) and have a shape reminiscent of... guess what?

It was the same volcano that profoundly changed the face of Catania with the terrible eruption of 1669, twenty-four years before the disastrous earthquake that tore through the Val di Noto.

The centre of Baroque Catania is Piazza del Duomo, which features a unique monument that has become its symbol. It is called the Elephant Fountain and is a sort of talisman that protects the city from the whims of its volcano. Legend has it that the animal belonged to Heliodorus, an 8th-century magician famous for transforming people into animals.

Around the perimeter of the square are the Palazzo degli Elefanti, home to the Town Hall, the Palazzo dei Chierici and the Amenano fountain by Neapolitan sculptor Tito Angelini, behind which is the fish market. And then, the stunning cathedral of Sant'Agata, the Duomo of Catania, with inside the tomb of Vincenzo Bellini, one of the most famous composers of the 19th century.

Via dei Crociferi is the Baroque street par excellence. A disturbing story from the 1700s tells of a headless horse roaming the area. You won't meet it but just find buildings, churches and convents of extraordinary beauty, all condensed into 200 metres of walking.

5. Ragusa, why you should visit the aristocratic city of Val di Noto A reason to visit Ragusa? We give you eighteen, the number of UNESCO World Heritage monuments scattered between the old town, Ibla, and the settlement, Ragusa Superiore, built after the 1693 earthquake.

The local aristocracy never abandoned the old town centre. On the contrary, they ambitiously rebuilt a city that was even richer and more refined than its predecessor—winding streets and lanes lined with magnificent stately palaces, hidden courtyards, stone houses and jewel-like churches.

One of the most stunning you will ever enter is the church dedicated to St Joseph. Although small, its curved interior will leave you speechless, from the walls to the dome.

An uphill road takes you to the Duomo di San Giorgio, the most storied monument in Ragusa Ibla. The church is the masterpiece of Rosario Gagliardi, the principal architect of the Val di Noto Baroque reconstruction. The perspective game of his initial design allowed the luminous 19th-century dome to stand out. Famous for its ceramics and nativity scenes, the hilltop town of Caltagirone has a millennial history. A stronghold for Byzantines, Arabs and Normans, it stands on three hills and dominates a landscape of greenery and valleys.

Majolica, the symbol of Caltagirone's centuries-old craftsmanship, can be found almost everywhere, not only in the many shops that crowd the centre's streets-- palaces, bridges and even churches (the façade of the beautiful Church of San Pietro). Visit the Regional Museum of Ceramics, and you'll understand how deep-rooted this tradition is.

One of the symbols of Caltagirone is the Scalinata di Santa Maria del Monte. One hundred forty-two steps connect the town's old part to the new hillside district, all covered in colourful majolica. During the Feast of St James, hundreds of candles light the staircase, a custom that dates back to the 18th century.

The Norman Cathedral of St. James towers over the city skyline with its turquoise and golden dome. Destroyed and rebuilt several times, it retains a hypnotic charm. Nearby you will notice some of the most remarkable architecture, Palazzo Libertini di San Marco, Monte delle Prestanze and the Palazzo Crescimanno d’Albafiorita.

3. Modica, between chocolate and Baroque 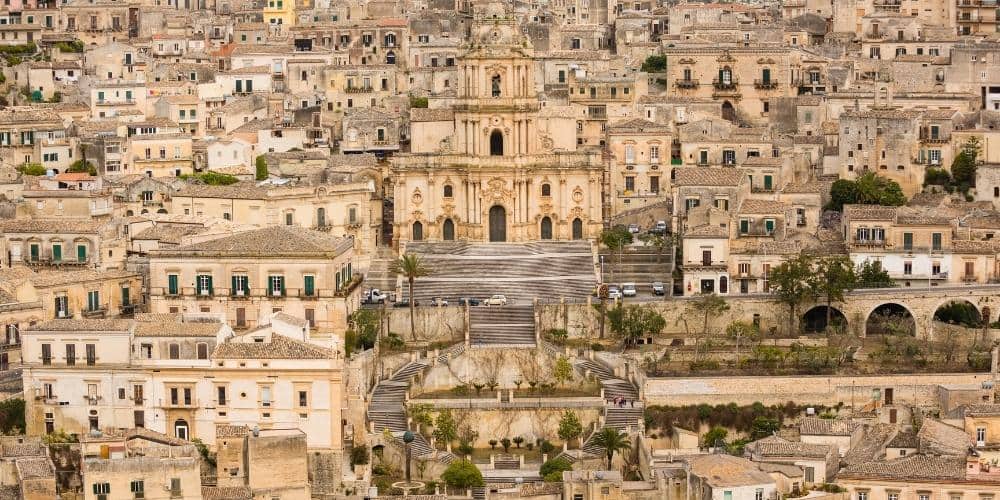 Eating Modica's chocolate will give you unforgettable feels, but it's not the only thing you won't forget after touring this Baroque town in the province of Ragusa.

Modica is a tangle of sloping streets and stairways flanking palaces and churches etched in a delicate honey colour. The Baroque here is not all condensed into a single lane or square, but you will have to explore, scan and get lost to find its hidden gems. You may struggle a bit to find your way around, but the rewards will leave you more than satisfied.

Many monuments dot the area around Corso Umberto I, the main street in the lower part of Modica. Visit the Church of San Pietro and the ancient rock church of San Nicolò Inferiore, the Civic Archaeological Museum and the inevitable Chocolate Museum.

Modica is also known as the "city of a hundred churches". There are many sacred buildings, the most opulent is the Duomo di San Giorgio, with a dramatic 250-step entrance. Palazzo Polara, an elegant aristocratic residence, is just a few metres away. Then, go for a ten-minute walk and reach the Belvedere del Pizzo. Take a break, enjoy the view of the town and continue exploring Modica by getting lost in its streets.

2. Scicli, beyond the TV drama 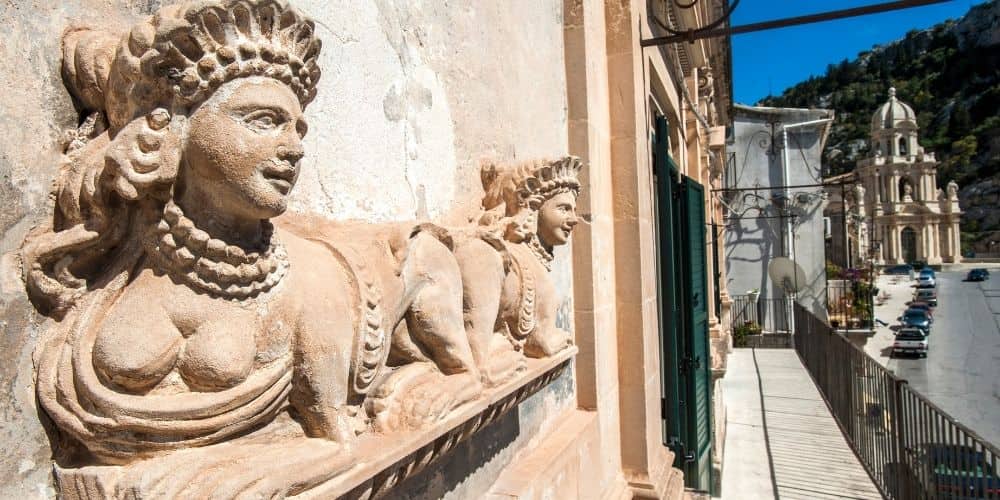 From an ancient Sicel colony to the set of the much-loved Italian television series "Il Commissario Montalbano", Scicli has been, done and seen a lot in its 3000 years of history.

It looks like an elegant nativity scene in warm golden hues and, in some ways, will remind you a bit of Matera. The area where it sits is rich in caves, which justifies the presence of dwellings carved into the rock.

Via Francesco Mormino Penna is the main street, a gorgeous boulevard lined with bars, boutiques, historic buildings and churches: the Town Hall; the Church of San Giovanni Evangelista with the Burgos Crucifix (or "Cristo in gonnella", as the locals call it); the Antica Farmacia Cartia in the Spadaro palace, one of the most sumptuous Baroque buildings; the Bonelli Patanè palace.

Piazza Busacca is not far from the Town Hal. The Rococo Church of the Madonna del Carmine and the statue in honour of local banker Pietro di Lorenzo stand out in the square.

Don't miss the Chiesa Madre di Sant'Ignazio in Piazza Italia; Palazzo Beneventano, splendidly decorated with unusual masks; and the Church of San Bartolomeo, a spectacular monument made even more astonishing by the location, a canyon that encloses it like a pearl. 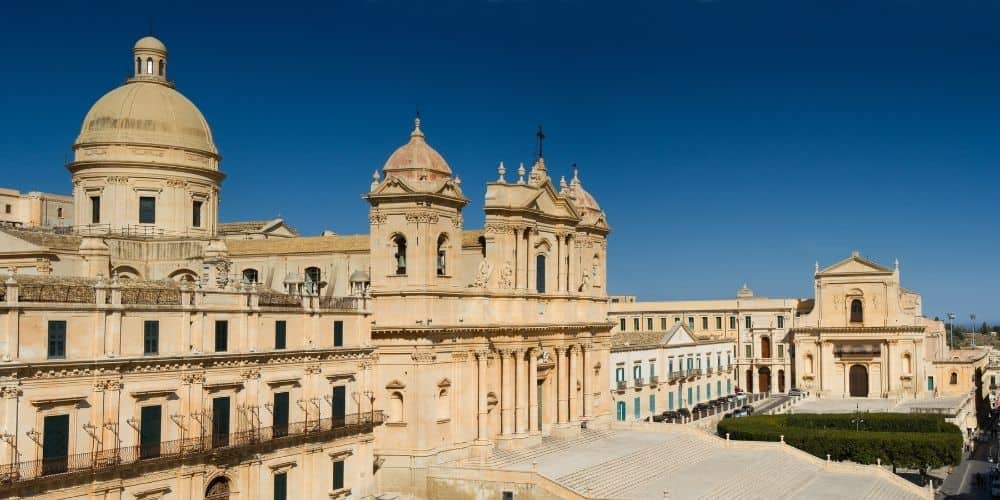 So beautiful to seem unreal. Or a movie set. Of all the late Sicilian Baroque towns (there are eight UNESCO World Heritage Sites: Caltagirone, Militello Val di Catania, Catania, Ragusa, Noto, Modica, Palazzolo and Scicli), Noto is the most representative, the one in which this distinctive style achieves a more marked theatricality than elsewhere.

After the 17th-century catastrophe, the town was rebuilt on another site, closer to the coast. The new Noto was an exquisite centre of absolute architectural and urban harmony.

Porta Reale marks the entrance to the historic centre. From here you take Corso Vittorio Emanuele II, Noto's main street. The church of San Francesco d'Assisi and the Monastero benedettino del SS. Salvatore are among the first edifices you will encounter on your stroll.

Continue to the Cathedral of San Nicolò, a building of national interest since 1940. The dramatic staircase further enhances its imposing façade. A few steps away are Palazzo Ducezio, the town hall, Palazzo Landolina, the Bishop's Palace and the Church of San Carlo al Corso.

Reach Piazza XVI Maggio, with the church of San Domenico, the Dominican convent and the Tina Di Lorenzo Theatre.

Turn into Via Nicolaci and observe the decorations adorning the Baroque palazzi: putti, animals and mythological creatures. A traditional artistic festival, Infiorata, covers this quaint district with astonishing flower compositions during May.