Sea land, beautiful city: it is Gallipoli, the pearl of Salento

Gallipoli is the only example in Europe of an island enclosed by walls on all four sides.

On the ancient walls a long and beautiful walk

The islet of S. Andrea that precedes it offshore, and which today is dominated by a lighthouse, was a sentinel in an outpost. Exposed to both attacks and winds. Also to slow down the latter, as well as to trap the enemies, tight and twisted are the narrow streets of the medieval village, which has always had to remedy the scarce space with ingenious solutions like the court houses, where the court has the function of square and road, parking and transit, condominium and air intake, light well and security strip.

Unscrupulous masonry stairs connect it to the upper floor, and the boundary between the private and the public can never be understood; arches, windows, portals change form continuously to adapt to the spaces.

Walking around the city is like discovering the wonder of the Baroque, with its wrought-iron balconies, the bustling facades, the refined portals, and the churches, starting with the Cathedral of Sant'Agata, in that tender Lecce stone on which the chisel was capable of every enchantment.

The Hellenistic fountain is a humanist-Renaissance monument that recalls the styles and myths of classical antiquity, it was part of the Greek baths.

In the ancient village ancient scenes are repeated every day: the repair of the nets, the preparation of the traps, the fish auction. The rest of the past is enclosed in the small prodigious municipal museum that keeps side by side the bones of a whale and cannon balls, a messapico sarcophagus, shells and corals. A museum of surprises that summarizes all the excitement of the "beautiful city": the smell of salt air and that of gunpowder, the Levante air and the sirocco cape on the island imbued with infinity.

A foaming flower on the Ionian waters 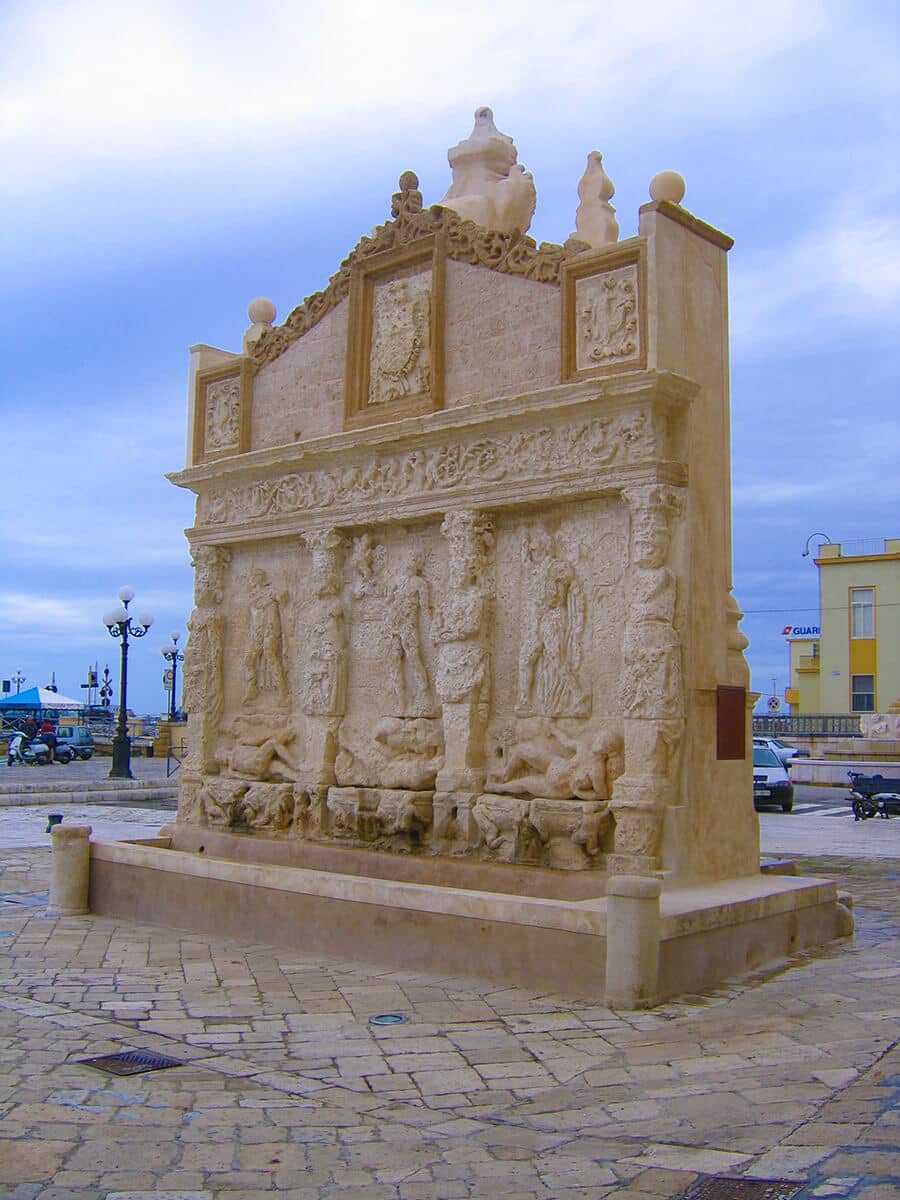 They say it floats on the sea and it's true.

The sea surrounds Gallipoli on all sides. There are those who saw it as a raft and who compared it to a foaming stone flower on the Ionian Sea.

Candid, sunny and stretched out over the sea in her cerulean embrace.

The sea can be friend or foe and so it happened for this island once a peninsula, which became an island for safety and which is connected to the mainland by a bridge that ran parallel to the cliffs and the castle attested in a position to allow the artillery to fire towards the north wind and towards sirocco.

It means, its name, "beautiful city" from the Greek Calipolis, and it can still be seen.

The crowned rooster that dominates the coat of arms would be the same as the shield of Idomeneo, a Cretan hero who fought in Troy and when he returned home after ten years he found his throne and his wife occupied. Then he wandered the Mediterranean until he landed on this coast of Salento and laid the first stone of Gallipoli.

However controversial paternity: there are those who glimpse it in the Galli Senoni and others in the Sicilians or even in the survivors of the Ark of Noah.

Certainly, however, already before Christ, mysterious people passed through these parts: starting with the Messapians who still today are the most mysterious of all. The Olympians were at home here and it has been influent the disembarkation of the Parthenians, those illegitimate children of Athens who, after fighting against Sparta, were liquidated by the ungrateful homeland and first touched the ground here, before founding  Taranto.

Then came the square legions of Rome, the Vandals, the Goths, the Franks, the Byzantines with their quirky and sumptuous robes, the Saracens who kept it uninterrupted for thirty years, the Normans who now swarmed through the land of Otranto: the men of the North who made it as impregnable as they were powerful, with its galleys on which they carried the aromas of oil and salt from one part of the Mediterranean to the other.