The beautiful city of Asti is situated in Piedmont, along the Tanaro river, in its homonymous province. A place with a medieval character, rich in history and monuments that stand out for their beauty. Let's discover each corner of Asti together!

Asti's history has very ancient roots. Its origins date back to Roman times, when the city was called Hasta Pompeia. The discovery of ancient walls in the city testifies the beginnings of this place rich in history.
Advancing through the centuries, before the year 1000, Asti became home to the Duchy of the Lombards, while in the Middle Ages, the city's role in trade and banking matters was fundamental. During the Middle Ages, therefore, Asti was adorned with monuments and numerous towers, which still makes it an amazing city to visit.
In the 16th century the Republic of Asti was proclaimed, following the Asti Revolution against the Savoy family and in the 19th century the city saw a modernisation of its buildings which led to the demolition of most of the medieval walls. Despite this, Asti still retains its fascinating medieval and historical beauty.

What to see in Asti

In Asti there are a lot of places and monuments to visit. Its artistic wealth fascinates everyone and many tourists stop in the city to admire every characteristic corner.
Palazzo Alfieri is one of the most important monuments because the writer Vittorio Alfieri was born and raised there. It's the perfect place to relive the poet's life with the possibility of visiting his room and admiring the interior of the palace still with its original furniture.
In Piazza Medici, you can't miss Troyana Tower, also known as the Clock Tower. The tower dates back to the 12th century and it was part of the Troya family mansion and it's the best preserved in the entire Piedmont region. Once you reached the top of this amazing medieval tower, via 199 steps, you'll have the opportunity to admire a breathtaking view.
The Cathedral of Santa Maria Assunta and San Gottardo is a beautiful example of Gothic art. Its exterior charm, with its wonderful Romanesque bell tower, also extends to the interior with the rich presence of great works of art such as statues, frescoes and columns.
Palazzo Mazzetti, on the other hand, is definitely another stop to make; it houses the Civic Art Gallery where there are several masterpieces such as those by Guglielmo Caccia, or Aliberti as well as paintings dating back to the 15th century, including important paintings of S. Martino Alfieri. The palace also contains an archaeological area with excavations and walls from the Roman era.
The Baptistery of San Pietro, the Crypt of Sant'Anastasio and the Red Tower are also worth visiting.

Asti and its territory is rich in typical products and there are many dishes to savour. From wines and liqueurs to specialities of all kinds.
Famous is the zabaglione di Asti, a liqueur made with Asti DOCG and which is perfect with dishes with berries.
Another typical product is honey, its production extends throughout the Asti area. It is impossible not to taste the typical Asti mustard, a jam made from what remains from the grape harvest.
The Brus, on the other hand, is also a local typical food. It is a very creamy butter with a spicy and very aromatic flavour.
Rice is the local product par excellence. There are several typical recipes using this cereal as the main ingredient, such as risotto with mushrooms or vegetables. 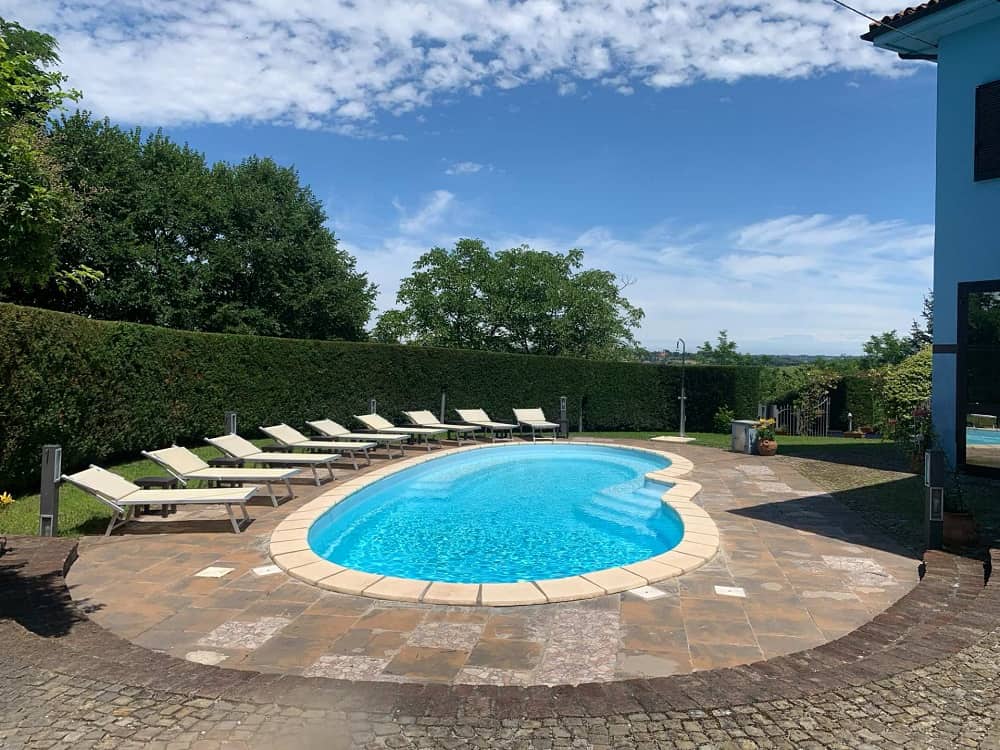 La Casa Celeste is the perfect place for those who love unique experiences, unforgettable moments of relax and breathtaking scenery.
A resort bed and breakfast surrounded by nature with charming gardens, forests and a beautiful view of the Alps. The light blue colour of the building adds to the charm of the surroundings and the overall picture is lovely.
La Casa Celeste will guarantee a pleasant stay, with a relaxing atmosphere and in complete privacy. Waking up to the beautiful singing of the birds and the wonderful sounds and scents of nature is surely something magical.
The villa has purpose-built rooms with the greatest care to its guests. The suites have every possible comfort, from private bathrooms to tea kettles and a library with books.
In addition to the many services offered, from breakfast with a wide selection of products such as cakes, cold cuts, biscuits and drinks, to free Wi-Fi, La Casa Celeste also gives its guests the great opportunity to immerse themselves in the flavours and traditions of the area, such as drinking a glass of the typical wine of the region.
A place where you can fully savour what the Piedmont region has to offer, a serene environment, a place where you can feel at home. La Casa Celeste, a paradise on Earth.

BOOK HERE YOUR HOLIDAY IN ASTI❯