Casale Monferrato, in Piedmont, is a town on a human scale with a romantic atmosphere that only small towns can offer. A tour through art, culture, history, nature and excellent food and wine.

Casale Monferrato, the territory and its origins

Monferrato is a historical-geographical area of Piedmont characterised by an almost hilly landscape, essentially between the provinces of Alessandria and Asti. It is generally divided into Alto Monferrato, Basso Monferrato, and Monferrato Astigiano (respectively the higher and the lower area and, finally, the area belonging to the province of Asti). In the Basso Monferrato, also called Casalese, we find Casale Monferrato one of the most important centres of this area. The municipality covers a flat area at the foot of the hills of Monferrato (a famous wine region), of which it is also considered the historical capital. The river Po crosses the city, as well as the Lanza and Mellana channels. Casale Monferrato has an altitude that ranges from 96 metres above sea level at its lowest point, 116 metres in the town centre and 299 metres above sea level at its highest point.

Its importance is due to its privileged status as a Roman municipium (Roman municipality) From then on, the locality took on particular significance in the entire district. After a period of decline due to the barbarian invasions, Casale Monferrato experienced a prosperous renewal between the 15th and 16th centuries under the last Byzantine dynasty, the Palaeologi. There was, therefore, a political, religious and cultural renaissance. After the Treaty of Cateau-Cambrésis in 1559, it came under the rule of the Gonzaga family, who fortified it and made it one of the largest and most prestigious fortress-cities in Europe. Spanish and French sieges marked the entire 17th century. Thanks to the Baroque influence, elegant churches and palaces were built that we can still admire today. During the Risorgimento, Casale Monferrato represented a natural bulwark against the Austrian Empire. A journey through history and much more...

The Castle of Casale Monferrato 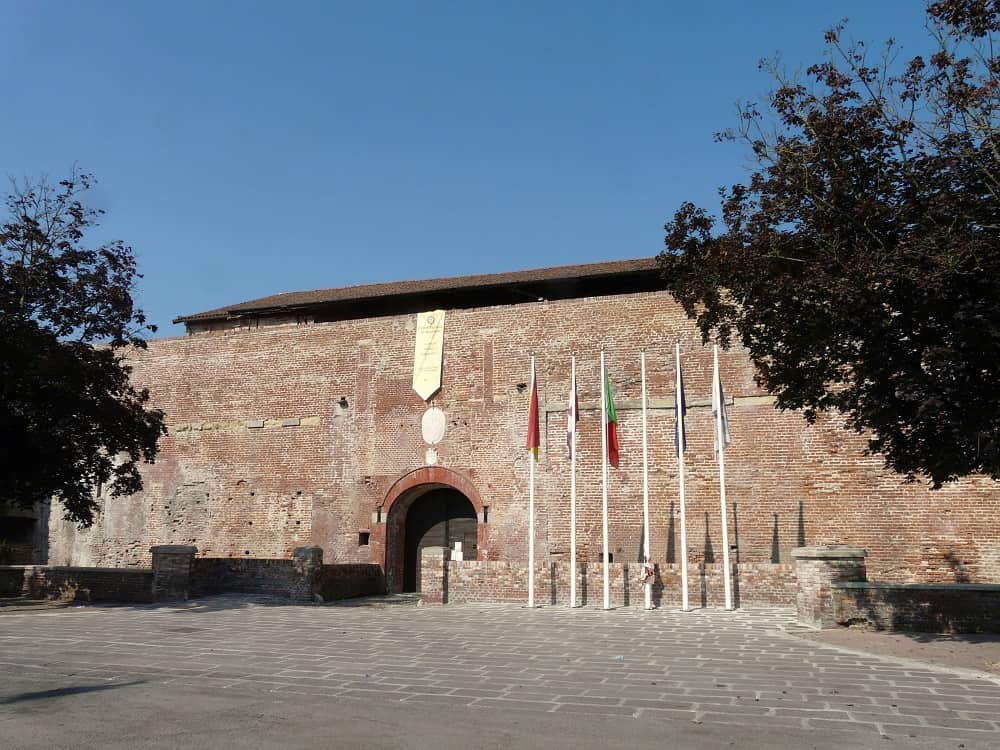 A fertile and strategically important territory, Casale Monferrato has been a landmark for many centuries. This is reflected in the historic centre, the urban core and the architecture. Being a small town on a human scale, you will breathe in the romantic atmosphere that only small towns can offer amidst ancient palaces, churches, porticos and historic shops. Undoubtedly, once in Casale, it will be impossible not to notice the Castle of Paleologos, which still stands majestically in the square it gave its name. Unlike the other castles in Monferrato, which dot the villages or stand on top of the hills, this one in Casale Monferrato is unique.

Its imposing structure is typical of fortresses in the true sense of the term. It has an asymmetrical hexagonal shape and is surrounded by a deep moat. It has now changed its original function to become a space that hosts exhibitions and shows of all kinds, a meeting place and a remarkable cultural role for the city. It is also home to the Enoteca Regionale del Monferrato (the regional wine shop of Monferrato).

The Duomo of Casale Monferrato or Cathedral of Sant'Evasio

Proceeding from Piazza Castello and taking Via Saffi, you will slowly catch sight of the Duomo. Also known as the Cathedral of Sant'Evasio, because it is dedicated to the city's patron saint, it is a remarkable example of Romanesque architecture. It was consecrated in 1107, but official sources and documents indicate that it was built before the year 1000. Over the centuries, it has undergone numerous renovations and reconstructions, for example, following the destruction of one of its two bell towers. Towards the middle of the 19th century, due to structural failure, the architect Alessandro Antonelli (famous for the Mole of Turin) proposed a project to demolish it and then build the Cathedral from scratch.

Fortunately, the archaeologist Luigi Canina opposed this project and carried out a significant restoration, which has given the Cathedral to us as we see it today. In fact, its asymmetrical façade is one of the aspects that most strike the visitor's eye. Today, the Cathedral houses the Museo del Tesoro del Duomo (Museum of the Treasure of the Cathedral), where you can admire numerous works of art of great value, such as mosaics, textiles and fine jewellery.

Piazza Mazzini is undoubtedly the city's main square. You can get there from Piazza Castello by taking Via Saffi, and the first thing you will notice is the bronze equestrian statue of King Carlo Alberto right in the middle. For this reason, the square is also known as the nice nickname Piazza del Cavallo, the Italian for Horse Square.

The monument was built at the behest of the municipal administration in 1838 for having chosen Casale as the seat of the second court of appeal in Piedmont. And in addition to this, also for the creation of the first bridge over the river Po. From this central square, four city arteries literally branch off:

Via Saffi, where the Civic Tower is locatedVia Roma, the shopping streetVia del Duomo, which, as the name suggests, leads to the DuomoVia Lanza, where you will find the historic Krumiri factory, the traditional biscuits of Casale Monferrato.

The synagogue, Jewish Museums and other city Museums 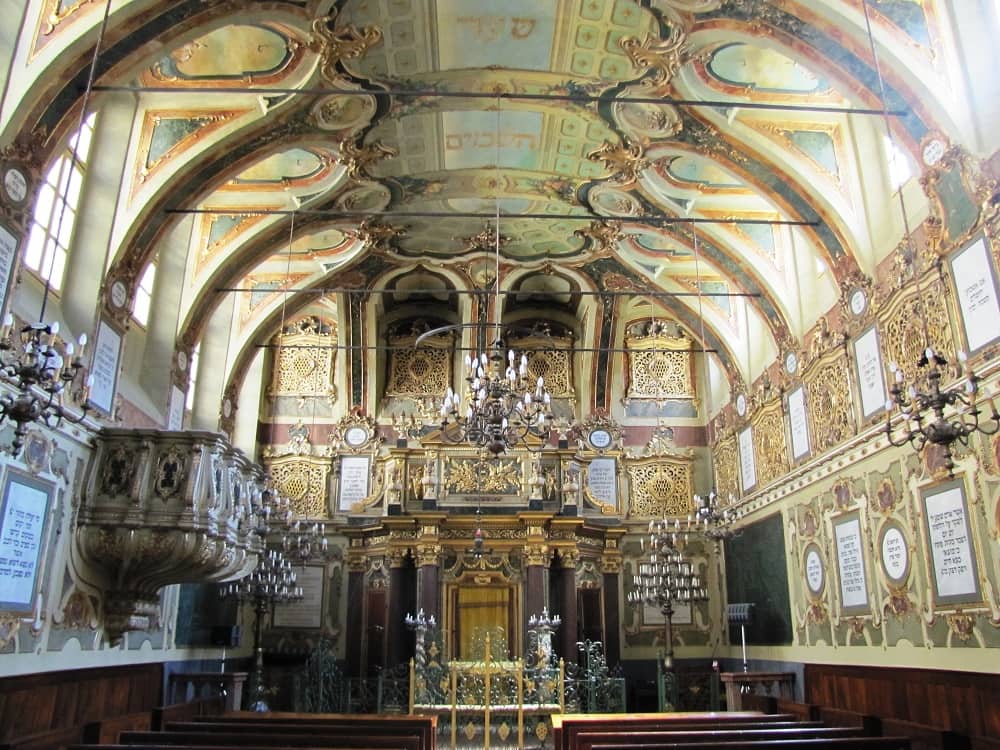 Built in the 16th century, in 1595 to be exact, the Synagogue of Casale Monferrato is one of the most beautiful in the world. Over the years, it has undergone several modifications, extensions and restorations in line with the artistic and cultural influences during which they took place. From the outside, it may look like a normal building without any artistic value, but inside you will be amazed by the beauty of the sacred temple. The Synagogue is also home to one of the most important museums of Jewish art and history in Europe. Lovers of art and culture will not be disappointed by Casale Moferrato. In fact, in addition to the sites of interest, the town has a considerable heritage of paintings, sculptures and ceramics. These can be seen at the Civic Museum and the adjoining Bistolfi Plaster Casts Collection, in the former Augustinian convent of Santa Croce.

Casale Monferrato is the scene of numerous events and has become an even more attractive destination for tourists. The initiative Casale Città Aperta (Casale Open City) is aimed at promoting culture, monuments and museums, is noteworthy. The event is held every second Sunday of the month and the preceding Saturday and includes guided tours on Sunday afternoons. At the same time, the Antiques Market also takes place and, on the third Saturday of each month (except August), there is the traditional market of biological and artisan products. Other noteworthy events during the year include the Regional Exhibition of San Giuseppe (in March) and Riso&Rose in Monferrato (rice and roses), the historic festival with a full programme of events (in May). Not to be missed is the Monferrato Wine Festival in September.

For further information and details, please refer to the official website.

On the list of things to do in Monferrato over a weekend, you should definitely plan a visit to the infernot. They are typical cellars dug by hand under the houses in a particular type of rock. The cantoni stone, typical of the Basso Monferrato area, is ideal for storing not only wines but also other perishable foods. Moreover, the tourist circuit of the infernot and the area on which they are located were included in the UNESCO World Heritage List with the following motivation: "An exceptional living testimony to the historical tradition of vine cultivation, wine-making processes, a social and rural context and an economic fabric based on the culture of wine". It should be noted, however, that the infernot in the municipalities of Vignale Monferrato, Cella Monte, Ottiglio and Terrugia are public and therefore easy to visit. However, on the occasion of special cultural and food and wine events, it will also be possible to access some of the private ones on request to the owners. It will be an interesting journey through time and history to discover a traditional custom handed down from generation to generation.

In the heart of the historic centre of Casale Monferrato, Locanda Rossignoli 1913 delights us with the best traditional Piedmontese dishes and, in particular, Monferrato cuisine. Raw materials and ingredients are carefully selected, and the skill and experience in the sector will satisfy every palate and every specific need or preference. You will find personalised menus, including proposals for vegans, vegetarians and menus designed for coeliacs or people suffering from food intolerances. There is also a wide selection of wines from the Monferrato area, a particularly fertile land rich in vineyards.

Among the specialities to try we find agnolotti monferrini, a typical dish from the Piedmontese peasant tradition. A delicious and rustic dish, they consist of fresh homemade pasta served with brasato sauce. The term brasato (brasing) indicates the slow cooking of meat by sautéing with wine or broth and tomato. Inside a hermetically sealed container, usually, a cast iron, earthenware or steel casserole, the steam that forms will enhance all the flavours. Meat lovers can also enjoy an excellent fritto misto alla piemontese (fried meat mixture), succulent boiled meat (boiled meat mixture) or vitello tonnato (veal with tuna sauce). Another delicacy to try is battuta di Fassona (beef meet). It is a particular breed of very tender, delicate, tasty meat suitable for eating raw. Among the Locanda Rossignoli's offerings, not to be missed are its cakes and desserts and the classic Krumiri piemontesi, delicious biscuits from the Casale Monferrato area.

But that's not all. Near the restaurant, you will find Ca' del Gine, an excellent wine bar where you can spend lovely evenings enjoying excellent local wines.