Marina di Camerota: an exceptional destination on the Cilento coast

Marina di Camerota is an exceptional destination on the Cilento coast, in the National Park of Cilento and Vallo di Diano. It’s located in one of the most enchanting areas of southern Italy, where nature is beautiful and unspoilt. Between 2000 and 2014 Marina di Camerota has received important awards for its crystal-clear sea and for the tourist landings.

The origins of Marina di Camerota and its paleontological caves

It was founded by the Greeks during their maximum expansion and the name Camerota, from the Latin camurus - curved, is linked to the presence of numerous limestone caves, scattered throughout the territory. Starting in the fifties, in these caves were found important archaeological finds, that dates back to the Stone Age. Stone instruments, fireplaces, animal bones, ceramic containers and painted pebbles helped to reconstruct the life of the prehistoric man, his activities, and also the environment in which he lived. Among the most important caves we mention the caves of Cala, Poggio and Serratura, that are within walking distance from the center of Marina di Camerota. Others are located on the coast and can only be reached by boat. Among these we name Grotta di Santa Maria, Grotta delle Noglie and Grotta degli Infreschi. This complex of caves, one of the largest in Europe, is of international importance and is a UNESCO World Heritage Site.

The old village has remained intact with its alleys, bridges, staircases and many houses that have preserved the traditional architecture. The life of the village took place in the alleys where people were busy with activities such as the processing of typical baskets and the conservation of tuna, anchovies and aubergines, in oil. Nowadays these activities are partly maintained. Narrow streets and alleys meet in the central San Domenico square and go down to the seaside! Every year, in august, the citizens of Marina di Camerota celebrate their patron saint San Domenico di Guzman in this square! This is the most important event in town and it lasts three days! The festival includes a procession with the statue of the saint, concerts and fireworks on the sea! Another historical symbol of the village is the Palazzo Marchesale, also known as Castello di Marina. This summer residence was built at the end of the seventeenth century by the Marquises of Camerota and was owned by the Marchese and Orsini families. The municipality of Camerota plans to restore the building to its original splendor.

The beaches along the coast of Marina di Camerota

The closest beaches to the village and within walking distance, are the beach of Calanca and the beach of San Domenico, also known as Marina delle Barche. They are sandy, with shallow waters, well equipped, suitable for families with small children and for the ones who enjoy a clear sea and having fun on the beach. Another town beach is Lentiscelle, located about 1 km from the village, near Punta Zancale. It is a pebble and sandy beach, well equipped, surrounded by the Mediterrean maquis, old olive trees and caves.

Walking nearby the beaches of Calanca and Lentiscelle, we find the tower of the Island and the two towers Poggio and Zancale: the so-called Saracen Towers. These are watchtowers, built in the sixteenth century, to prevent Turkish incursions.

The Mingardo beach and cala Finocchiaro 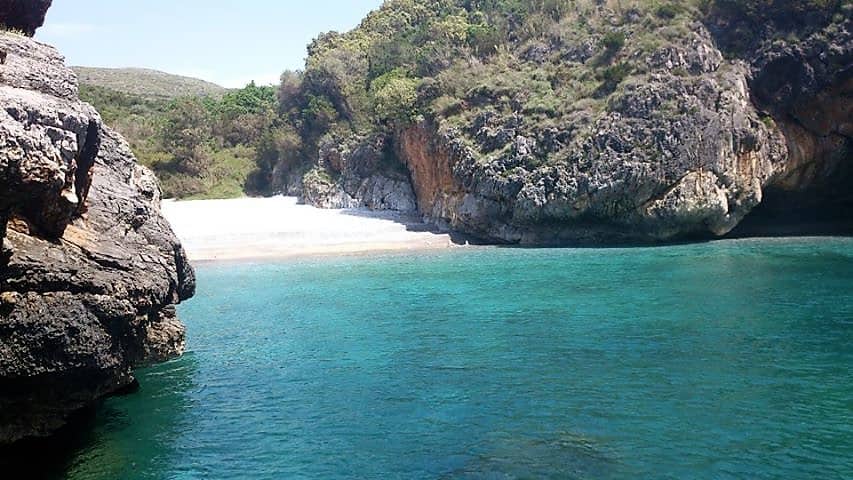 Outside the town, along the road that connects Marina di Camerota to Palinuro, we find the Mingardo beach. It’s a long, sandy beach with some rocks and a pine forest behind it. It’s partly equipped and partly free. Cala Finocchiaro or Troncone Beach, is the continuation of the Mingardo beach. Blue sea, grey sand and unspoiled nature. It is known not only for its beauty, but also for being the nudist beach of Marina di Camerota since 2011, the only one in the region Campania.

The beautiful beaches and caves of the coast, can be reached through walking paths in the Mediterranean maquis or by boat. To visit them and enjoy this wonderful nature, we recommend the Cooperative Cilento Mare. The Cooperative, founded by fishermen of the area, for more than 10 years, has been organizing boat trips among the most beautiful coves, caves and beaches of the coast of the National Park of Cilento and Vallo di Diano.

The excursions depart from the port of Marina di Camerota on boats equipped with all the necessary security measures. There are several daily departures and it is possible to book half-day or one-day trips. The cooperative, on request and with a minimum number of people, also organizes experiences such as the lamparata: an ancient technique of fishing which takes place at night. The fishermen of Marina di Camerota will guide you in this wonderful sea to discover beaches, coves and sea caves and with their tales will reveal stories and legends of these beautiful places. Visit the website of Cooperativa Cilento Mare for details about all the excursions available. Marina di Camerota is the right place for an unforgettable holiday!