Magna Graecia Tour, an incredible holiday in Calabria from the North to the South

A journey in Calabria from the North to the South, among the iconic places, incredible landscapes and beaches where to relax

One region, a thousand colors

Calabria is a region of a thousand colours shades: it goes from the green of its hills to the blue of its sea and its lakes, passing through the white of the mountain peaks and the bright colors of its flowers and tables laden with delights that cheer the sight and the palate. We at Visit Italy have made a journey to discover these wonders: from north to south we have tasted the peculiarities of this land, which we will never tire of traveling.

The pure air of the Sila 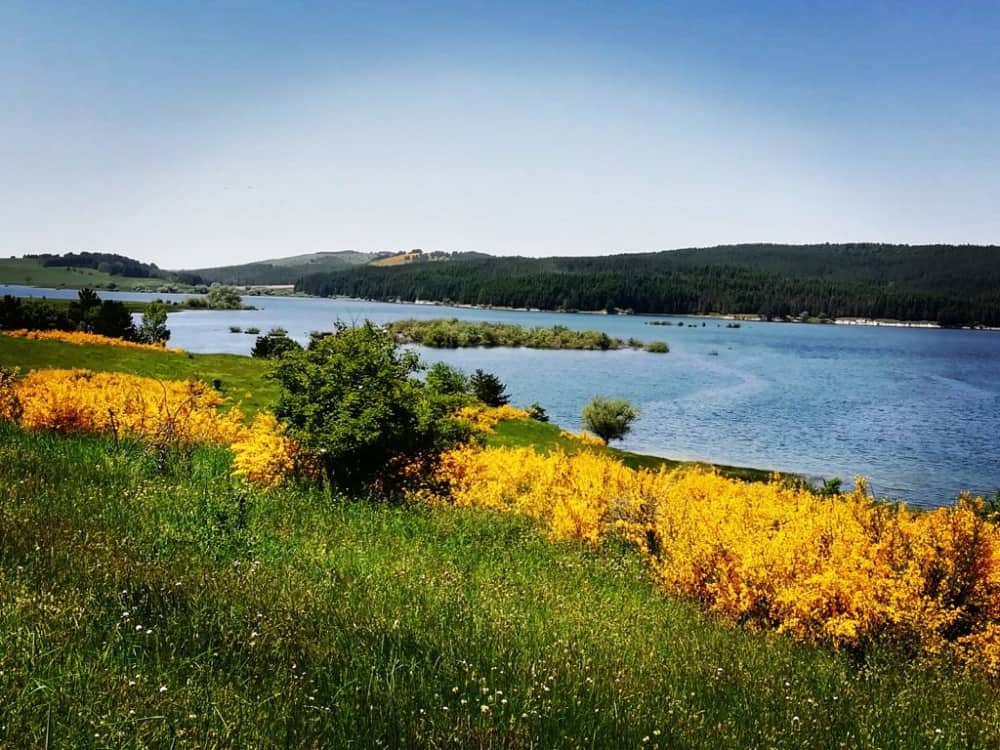 Our adventure began from Sila, the green heart of Calabria: in San Giovanni in Fiore you feel immersed in a unique spiritual atmosphere. Abbot Joachim of Fiore lived here, also mentioned by Dante Alighieri in the Divine Comedy and it takes little to understand why this place was an inspiration for the religious. It seems to be in paradise, in a nature that smells of pine and fir trees, with the fresh mountain air that regenerates body and mind.In fact, according to several studies, the Sila has the cleanest air in Europe.The Sila lakes are a spectacle for the sight and the contrast between the green and the blue of the lakes makes it seem as if you are in front of a perfectly executed painting, capable of arousing strong emotions. During our trip to Sila, we are advised to stop in Camigliatello Silano, and we have not regretted the choice at all! The houses with sloping roofs, the wood that predominates here in the architecture and the various craft shops scattered throughout the course, seem to catapult us into a typical Christmas village, where time seems to have stopped.

In Papasidero a trip to the Paleolithic

The next stop of our journey took us to the Pollino National Park, another superb place. In Papasidero we are enchanted by the Grotta del Romito, a site that dates back to the Upper Paleolithic and is of great importance, even at a European level. The guide that accompanies us to the discovery of the territory tells us that the discovery of this cave was made in recent times (in 1961) even if it dates back to 10,800 BC. The village of Papasidero, of Byzantine origin, welcomes us among its quiet and characteristic streets, giving us moments of peace and serenity.

In the blue of the Arcomagno

After being lulled by the majesty of the Sila and Pollino mountains, it's time to get to know the marine soul of Calabria! San Nicola Arcella is one of the iconic places of Calabria, but the emotion you feel to be under the Arcomagno is unique. It is no coincidence that it is one of the most photographed sites during travels in Southern Italy. The natural environment around the Arcomagno is so beautiful it takes your breath away: caves, inlets, crystal clear water and at sunset a series of colors and shades that give you sensations of well-being never experienced before.

During our trip, colors were the leitmotif of the experience. Perhaps not everyone knows that in Calabria there is a piece of Provence, a purple corner of paradise. The Lavender Park of Morano Calabro is a spectacular place, where you can let yourself be intoxicated by the scents of the special plant, which was once one of the excellent crops of this land. The stop we made here regenerated us, allowing us to also discover the ancient village of Morano Calabro, which won us over at first glance, given its very particular urban layout. But the surprises in Pollino are not over, in fact another jewel that we had the pleasure of visiting is Civita, a village that contains typical buildings, known as Case Kodra. The peculiarity of these houses scattered throughout the historic center is their resemblance to human faces, being in their presence is truly a unique experience.

After getting to know the villages of the Pollino area, we let ourselves be guided on the Ionian coast of Calabria, discovering places of culture that are nothing short of fantastic. This is the case of Rossano where we have the opportunity to see with our own eyes the Codex Purpureus Rossanensis, a manuscript of the New Testament written in purple parchment, of great religious, cultural and artistic importance. But it doesn't stop there! In Rossano, the cathedral also houses the fresco of the Virgin Acheropita, that is, a painting of miraculous origin, therefore not made by human hands.

In the Crotone area between castles and wines

After traveling the coastal road, overlooking the Ionian Sea and caressed by the sea breeze, we arrive at Le Castella, a magical place, where the ancient fortress seems to float on the water. The Aragonese castle is connected to the mainland by a strip of land and has resisted there, for centuries and centuries, in its imposing wonder. Let's not miss the opportunity to take some photos among the thick walls of the castle, catapulting ourselves with the imagination into various historical eras and remaining stunned while admiring this fascinating place, whose stones tell the passage of time. A stone's throw from here, a stop in Cirò, the home of Calabrian wine par excellence, is a must. Among the various wineries we had an unforgettable taste experience, tasting wines with a thousand-year history and tasting typical products of the area. Among wineries and vineyards, we discovered the gourmet soul of Calabria.

The meeting between East and West

The next day we are ready to immerse ourselves once again in the spirituality of the Calabrian land, following an itinerary that leads us to the discovery of some milestones of the region. In Stilo we touch firsthand the fusion between eastern and western culture: the Cattolica is a small church that dates back to the Byzantine era, a unique example in Europe, whose façade reproduces in scale the great temples found in Anatolia, Armenia and Georgia. In Pazzano, another small village, we visit the Sanctuary of Monte Stella, dug into the rock, where nature and spirituality come together. To end the day with a flourish, there is nothing better than letting yourself be overwhelmed by the sound and energy of the water of the Bivongi waterfall, 114 meters high and considered one of the highest in Italy. This area of ​​Calabria is very particular, in fact the influence of Greek culture is perceived not only in the architecture, but also in the language. A Greek minority lives here, carrying on traditions such as weaving and the art of ceramics. You take a journey within a journey, discovering the ancient roots of the Calabrians and better understanding the added value that the union of peoples gives to the territories. The archaeological area of ​​Locri allows you to travel in time, making us discover how the inhabitants of the area lived in the past, both in Greek and Roman times. You walk through history and each step is an unforgettable experience.

On the Costa degli Dei: beaches and flavours

After visiting the Ionian area of ​​Calabria, we reach the Tyrrhenian area again and arrive on the Costa degli Dei, stopping as a first stop in Tropea. The most famous Calabrian tourist destination welcomes us in all its splendor: crystal clear sea, white beach, the islet in front of the village, the historic center that smells of authenticity, with stately palaces scattered along the entire route, enriched by large portals merit. Everything makes us fall in love with this pearl lying on the Tyrrhenian Sea. The Costa degli Dei, however, offers us many other places to explore, so let's set off to discover Serra San Bruno and its Certosa, the first Carthusian convent in Italy. Here too, spirituality pervades us, giving us timeless emotions. The mysticism of the place is flanked by traditional dishes that we at Visit Italy have had the opportunity to taste: pasta alla serrese, a simple recipe but rich in taste, in which capers and anchovies are the main ingredients, meat prepared with different variety of mushrooms and the typical sweets known as the 'nzulli, a real pleasure for the palate!

In Pizzo tasting the Tartufo

Another taste experience we had during our trip to Calabria was the tasting of Pizzo Calabro ice cream: the famous tartufo. In a picturesque square, a few steps from the Murat Castle (another symbol of the village), let yourself be carried away by the sweetness of this artisan ice cream that contains a heart of dark chocolate. Talking with the inhabitants of Pizzo, we discover that a stone's throw from the beach is a very unique place: the small church of Piedigrotta, a place of worship carved in stone, very evocative and surprising. It is interesting to find out how many small jewels are hidden in every corner of the territory. In fact, when we went to the church of Piedigrotta, we discovered an extraordinary and original site.

The last two stages of our trip to Calabria allowed us to discover two other souls of this extraordinary land: mystery and myth. The walk in Reggio Calabria has filled our hearts with infinity: on the Falcomatà seafront, caressed by the sea breeze, you can see Etna in the distance, you can smell the scent of salt and discover a city that has focused a lot on contemporary art . A stone's throw from the seafront, there is the Museum where the famous Riace Bronzes are kept, whose origin still remains a mystery today. Being in the presence of these statues of yours gives strong and contrasting emotions: one wonders where they were made and from which historical period they have come down to us. In Scilla, known as the Venice of the South, myth is king thanks to the legend of Scilla and Cariddi. The seaside village welcomed us in all its genuineness: here among the colored goiters we tasted a gastronomic specialty: the sandwich with swordfish, chatting with the fishermen who told us how it is caught and then brought to the table.

God wanted the sea to be always purple, the rose blossoming in December, the sky clear.