Did you know that in Abruzzo there is a heart-shaped lake? Lake Scanno is a place absolutely you have to discover and it will amaze you not only for its natural beauty, but also for the magic air that surrounds this magnificent place hidden in the Marsicane mountains.

The origins of Lake Scanno 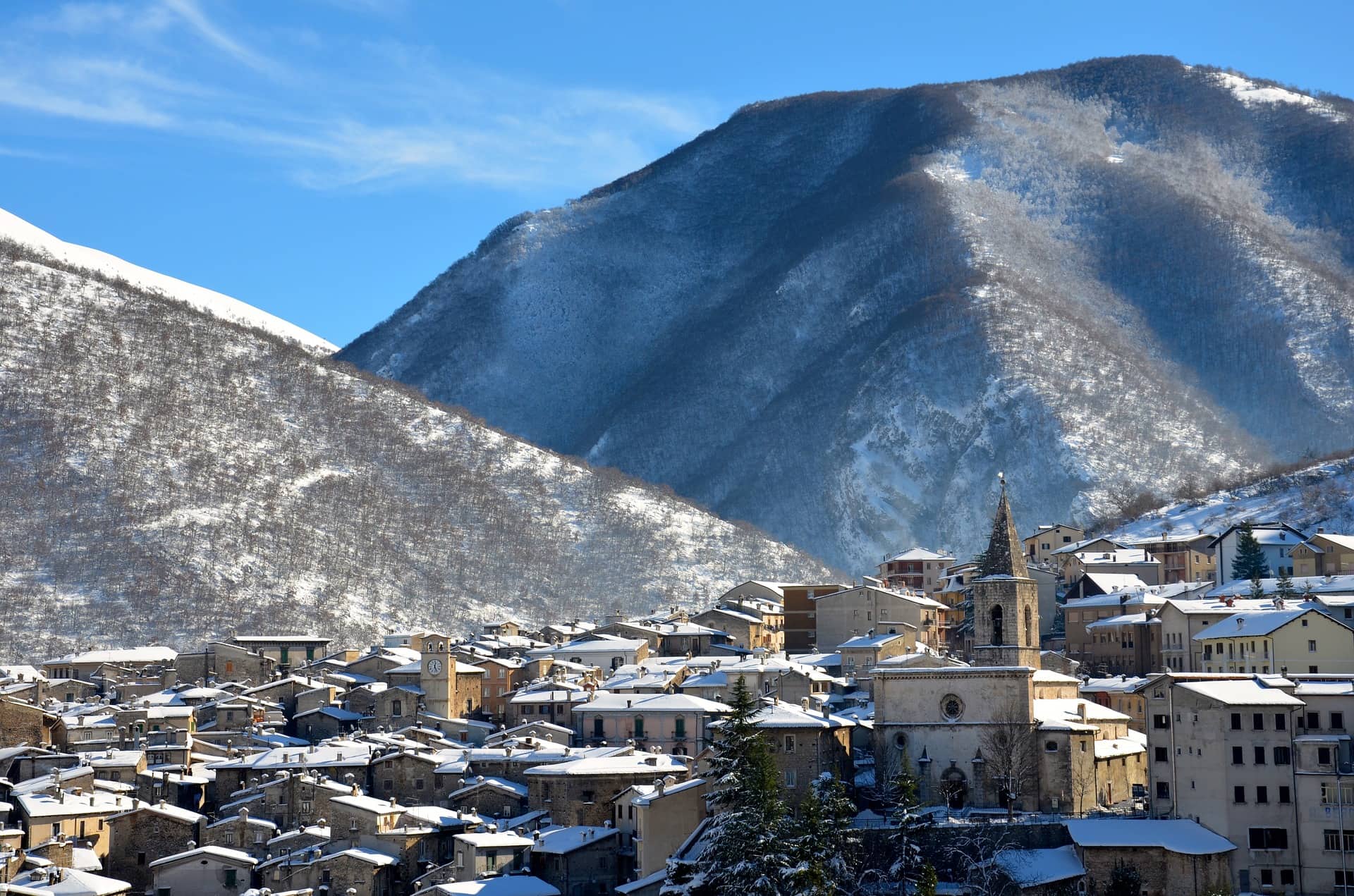 Lake Scanno is the largest natural lake in Abruzzo.

Not everyone knows, in fact, that most of the lakes in the region have been created artificially to generate electricity. Lake Scanno, on the other hand, was formed naturally due to a landslide on Mount Genzana, which blocked the course of the river Tasso, flooding the surrounding valley and giving rise to the lake.

This happened many years ago! It seems to date back to the end of the last ice age.

Lake Scanno is located about 922 meters above sea level. It is therefore not surprising, because of the altitude, that it is frozen in winter.

It is located in the luxuriant Sagittario valley between the villages of Villalago and Scanno.

Scanno is one of the most beautiful villages in Italy and, not surprisingly, a favorite destination for photographers from all over the world, where it is still possible to see old women in traditional clothes. Certainly a visit to the village cannot be missed.

How to spend a day at lake Scanno 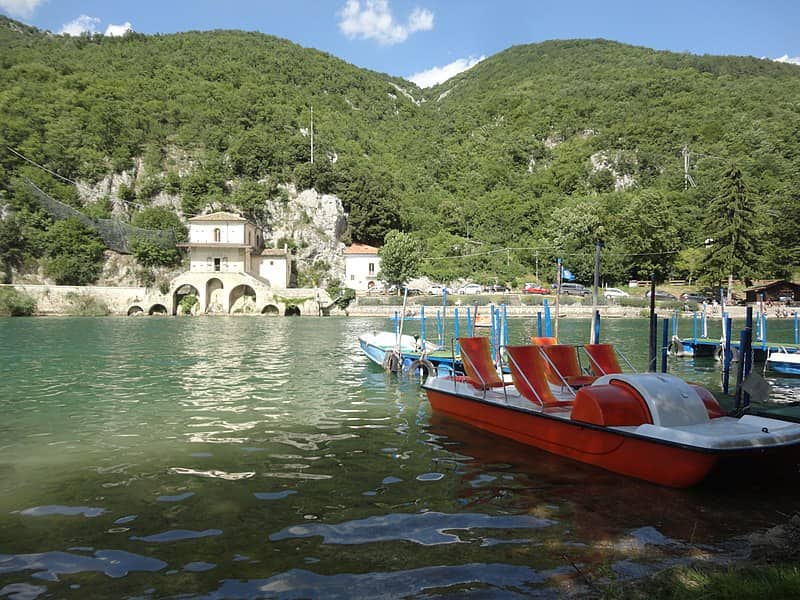 Lake Scanno, with a maximum depth of 32 meters, has won the blue flag, so it is completely suitable for swimming!

There is an equipped beach where you can spend moments of pure relax. There are mountain bike trails, with the possibility of renting bikes and rickshaws, a children's play area, a parking area for campers, rowing boats and canoes. Windsurfing is also possible.

The lake is rich in flora and fauna, in fact its typical emerald waters are due to the presence of algae and aquatic microorganisms and to the vegetation of the surrounding mountains which is reflected in it.

The waters are full of fish, in particular perch, whitefish and trout, but also catfish and pike, in fact it is possible to practice fishing, according to an inter-municipal regulation with a specific tariff provided on a daily, weekly, monthly or annual basis.

There are wolves and bears in the area. Moreover, you can be enchanted by the flight of numerous species of birds such as mallards, owls, hawks and golden eagles, therefore it is an ideal destination for bird watchers.

Lake Scanno is enveloped in a series of mysteries and curiosities, which make this place even more suggestive. But be careful not all stories are true!

First of all, there is the myth that Lake Scanno has the shape of a heart. In reality it is not true, but from some panoramic points it is possible to see it in that shape. There is a path called the Path of the Heart, which will allow you to reach the most beautiful panoramic point of the lake in an hour. Highly recommended excursion, suitable for everyone. Along the way you will also meet the Hermitage of Sant’Egidio.

Many local legends are linked to the birth of Lake Scanno, described as a supernatural phenomenon that occurred to defend small local communities from external attacks.

According to an ancient legend, the lake of Scanno was formed during a fight between the Romans and King Battifolo, a local king. Seeing his army in difficulty, he invoked the help of the magician Bailardo who, through a spell, covered the enemy camp with water, creating the Lake Scanno.

In another legend Pietro Baialardo, in love with the fairy Angiolina, ordered his kidnapping. To escape the kidnappers, the fairy create a lake under their feet in which they sank.

In more recent years, Scanno has been the custodian of strange phenomena: the water level reduced around six meters in less than a year, the compasses of the divers who no longer report the north once immersed in the lake, fishes that suddenly die, an unidentified object buried in the seabed and, finally, weapons and ammunition from the last war that resurface after almost seventy years.

Although many of these events have then found an explanation, we cannot deny that there is a magical and mysterious atmosphere around this lake!

What to see near Scanno Lake 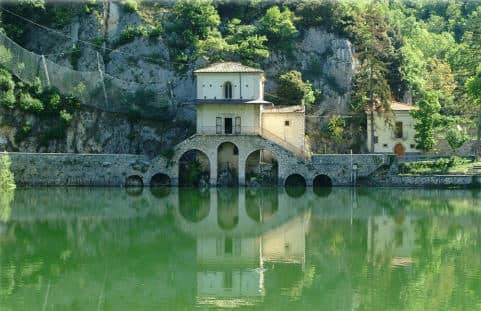 Church of the Madonna del Lago

The Church of the Santissima Annunziata, better known as the Church of the Madonna del Lago, is a small church located on the shores of Lake Scanno. From the outside it may appear bare and almost anonymous, but the interior will surprise you. The altar is in fact located on a natural rock wall on which several homages to the Virgin are placed as a sign of devotion by the locals.

According to popular folklore, the Madonna would have performed miracles and healings, so much so that her cult is deeply felt in Scanno, Villalago and Frattura di Scanno, which celebrate the feast of the Madonna del lago on March 25th every year. Even the place where the church was born seems to be linked to a popular legend.

The Hermitage of Sant’Egidio is another place very dear to the locals because the Saint freed the country from the plague of 1656.

In the years the hermitage has been home for hermit friars but also for men who have fallen into poverty who have found shelter and possibility of survival in it.

The hermitage is located in a magnificent panoramic position, the aforesaid Path of the Heart easily reachable walking by foot.

How to reach lake Scanno

Lake Scanno is located just over 30 km from Sulmona and just 20 km from the Cocullo exit of the A25 Rome-Pescara motorway. Once you exit to Cocullo, continue towards Scanno. The eastern shore of the lake is crossed by the regional road 479 "Sannite", which connects Sulmona and Villetta Barrea. Through this road it is possible to reach the municipalities of Alfedena (45 km), Villalago (7 km), Anversa degli Abruzzi (16 km). If you travel by bus, it is preferable to arrive in Sulmona and continue with the local transport company (TUA) to Scanno. From there the lake can be easily reached by foot in about ten minutes.