La Maddalena Archipelago: the charme of nature and the luxury of an exclusive place

We are on the island where the rocks have strange shapes and where the sea is the same colour as the sky but brighter. We will take you to the Archipelago of La Maddalena in the north-east of Sardinia, full of exclusive and precious places, ideal for special moments, among the most fascinating views of Gallura.

In this slice of Sardinia, where the sea and sky give the impression of competing to see who has the clearest blue, every detail and every glimpse seem to have been designed by the hand of a skilled artist who has dreamt them, created them, loved them.

He has chosen the shapes, the nuances, the scents that can be perceived even more intensely when silence reigns all around, interrupted only by the rustle of the wind in the branches. And the beauty you will find here really knows how to leave you speechless.

The National Park of the La Maddalena Archipelago 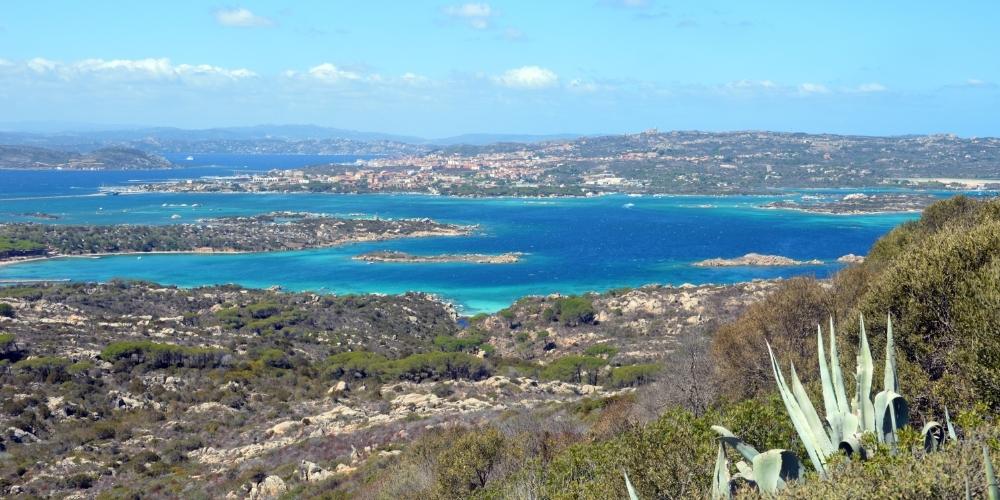 Near the north-eastern tip of Sardinia, near the Bocche di Bonifacio, an archipelago of 62 islands and islets seems to have been created especially to surprise those who do not like to settle. The jagged coastline hides elegant views, almost unexplored coves and white sandy beaches. The largest and only inhabited island is La Maddalena, which gives its name to the archipelago and is the administrative seat of the National Park.

Imagine a landscape shaped by the wind, which over the course of time has shaped it according to its whims, where the colours are those of the Mediterranean maquis, which accounts for about a third of all Sardinian flora and numerous rare species; here the air has the scent of juniper, mastic, heather and myrtle, which grow proudly on the arid, sun-beaten land and mingle with the smell of salt. Imagine a sea inhabited by fin whales, sperm whales, dolphins and Caretta Caretta turtles, which are often seen swimming in the Archipelago, part of the marine protected area of the Cetacean Sanctuary. And finally, imagine 180 kilometres of coastline with some of the most beautiful beaches in the Mediterranean, in coves where the sea takes on so many shades of blue that it is famous the world over.

But the best thing is that this small natural paradise is protected in its uniqueness and most places can only be reached by boat or on foot via paths, thus remaining a privilege for the few where you can enjoy a beauty off the beaten track.

To ensure you don't miss anything of what this magical place has to offer, you can rely on those who know it well. All you have to do is go to the port of Palau or La Maddalena, and Elena Tour Navigazioni will accompany you with its boats on itineraries designed to give you an unforgettable experience.

The island of Budelli and the elegance of a precious sand 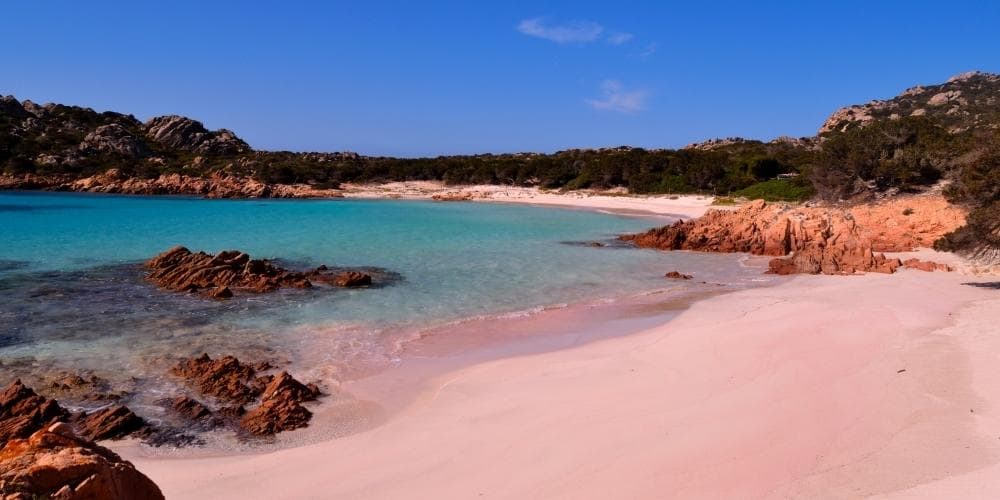 The Spiagga Rosa (Pink Beach) on the island of Budelli looks like heaven on earth with its colours and scents, and is so called because of the particular colour of the sand, rich in tiny fragments of granite, coral, shells and molluscs' shells. The pink colour is due to a micro-organism that lives in the posidonia meadows: when it dies, its shell reaches the shore and is broken up by the action of the water and the wind. Unfortunately, due to the "plundering" of the sand by visitors over the years and the anchoring of boats that have caused the posidonia to recede, it is no longer possible to dock on the beach, but you can still admire the spectacle by sailing nearby. This place was made famous by the director Michelangelo Antonioni, who set parts of his film 'Red Desert' here in 1964.

To the north-east of the island of Budelli is the Spiaggia del Cavaliere (Knight's Beach), with sand as fine and soft as talcum powder.

The island of Caprera: a hero's last resting place 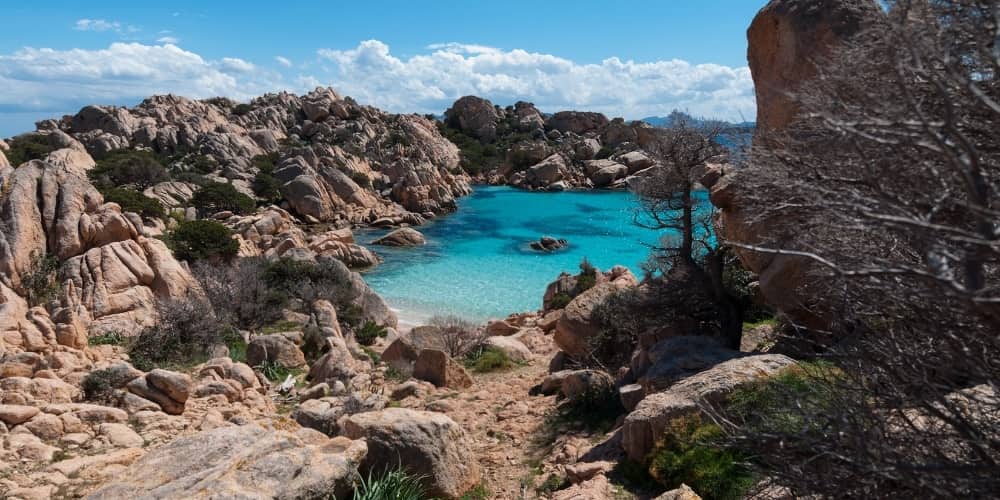 Caprera is famous for being the final resting place of Giuseppe Garibaldi, "the hero of two worlds", who spent the last years of his life here. The Memorial and the House Museum have a very important historical value and visiting them is like stepping back in time to learn about the general's life.

The island is the second largest after La Maddalena, to which it is connected by a bridge. It is completely protected and therefore still wild and its eastern part is full of steep pink granite cliffs that make it difficult to walk on. Cala Coticcio, known as the 'Sardinian Tahiti', can be reached by foot or by sea. Similarly, Cala Napoletana can be reached, a beach divided into three small beaches where the sea is so transparent that the stationary boats seem to fly against a background full of colourful fish. Also worth mentioning is the beach of the Relitto, so called because of the skeleton of the ancient ship lying on its shore.

Caprera also offers very interesting excursions from a historical, naturalistic and scenic point of view to trekking enthusiasts, thanks to 16 paths that allow you to discover breathtaking views while walking among the scents and colours of a nature that is at its best in autumn and spring.

The island of Spargi: amidst the red of the gorgonians, ancient wrecks and the echo of pirates 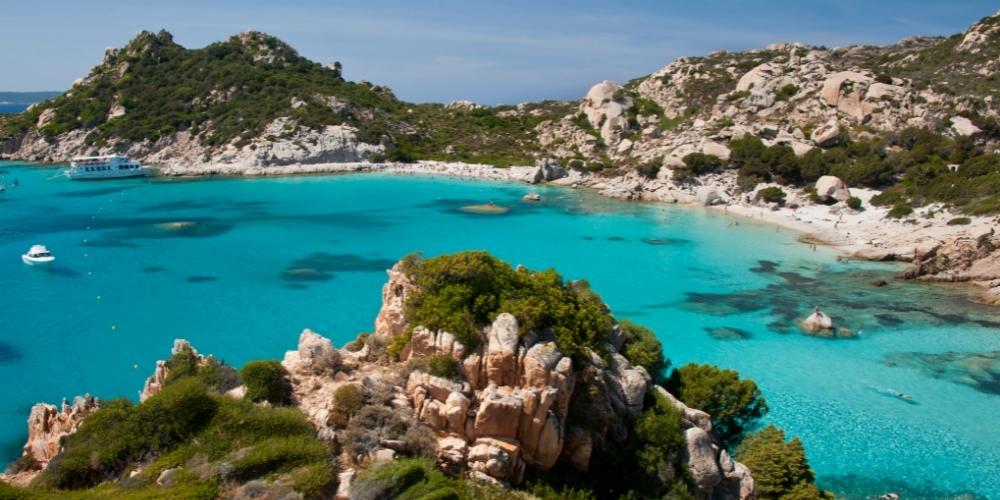 Spargi has an almost circular shape and is the third largest island in the park. Rare species of birds nest on the smaller Spargiotto and the Spargiottello rock is a paradise for diving enthusiasts, who can admire the red gorgonian sea fans in the Washington shoal and the wreck of Spargi, a 35-metre Roman ship from the 2nd century BC, in the Corsara shoal.

The island's most beautiful beaches are found especially on the southern and eastern sides: Cala Soraya, with its unusual boomerang shape, and Cala Corsara, which is said to have been an ancient pirate hideout and which in 2018 was included by the American magazine Forbes among the seven Italian beaches to visit. Then there is Cala Conneri, known as the "love cove", Cala Granara, Cala Canniccio and Cala Pietranera and Cala Piscioli with their vegetation right down to the shoreline.

Spargi is also home to several military fortifications from the World Wars that are now tourist attractions, including Forte Zanotto, camouflaged in the vegetation, and the abandoned military harbour of Cala Granu.

Right in front of the spectacle of Spargi, in Santa Teresa di Gallura, is the Resort Valle dell'Erica Thalasso & SPA 5* owned by the Delphina Group. The structure is a jewel created for those seeking a luxury and sustainable holiday, immersed in a 28-hectare Mediterranean park and surrounded by 1400 metres of white sandy beaches and coves.

The island of Razzoli is unusual because of its high cliffs, but here too there are beaches not to be missed: Cala Lunga, Cala Cappello and Cala Noce. The Passo degli Asinelli separates it from Santa Maria, which is flat, with fertile soil and a natural pond that is a destination for many species of birds. The island is also different from the others because it is home to around 20 houses that serve as summer residences, built before the bans, including those of some show business personalities.

A 20-minute ferry ride from Palau brings you to an island whose history has always been closely linked to the sea and the navy because of its strategic position in the centre of the Mediterranean: La Maddalena. Among the alleyways of the village, you can clearly feel the spirit of a place that is very devoted to its tradition, a beautiful and colourful town that winds its way along a natural harbour and is home to small shops, bars, restaurants and 18th-century buildings. As evidence of the past, in the port of Cala Gavetta stands a column dedicated to Giuseppe Garibaldi, in the church of Santa Maria Maddalena there is a crucifix that once belonged to Admiral Nelson (who also has a bay named after him here) and another point of interest is the Nino Lamboglia Naval Museum (unfortunately temporarily closed) dedicated to the Roman wreck of Spargi.

A 45-kilometre-long scenic road that runs through the whole island allows you to admire the most beautiful places, among which there are certainly numerous beaches and coves. In the northernmost part of the island, protected by a 128-metre-high promontory, is the beach of Bassa Trinita, which takes its name from a small church dating from the 18th century to which the islanders are very attached. Also in the northern part is the deep inlet of Cala Spalmatore, one of the most famous, whose sandy bottom has a peculiar pinkish hue with yellow and black streaks of quartz and mica, surrounded by Mediterranean scrub and behind which is a small pond. Not far away, at the entrance to the tourist resort of Porto Massimo, is Cala Lunga, and it is also worth visiting the beach of Monti d'a Rena, so called because of the mountain of white sand that distinguishes it. Finally, in the southern part, there is Cala Francese, one of the most beautiful beaches of La Maddalena, surrounded by granite rocks, where the water immediately becomes deep.

"Life in Sardinia is perhaps the best that a man can hope for: twenty-four thousand kilometres of forests, countryside and coastline immersed in a miraculous sea should coincide with what I would advise the good Lord to give us as a gift, Paradise"