The pretty town of Campobasso, the capital of Molise "the smallest region" of southern Italy, is a place of medieval origins that has a large amount of historical, artistic and environmental heritage in its territory.

The pretty town of Campobasso, the capital of Molise "the smallest region" of southern Italy, is a place of medieval origins that has a large amount of historical, artistic and environmental heritage in its territory. In this regard, the town developed at the beginning at the foot of a hill which is today dominated by the Monforte Castle, certainly built before the end of the 14th century and which takes its name from the leader and feudal lord Cola di Monforte, who personally and economically took care of the restoration works after the earthquake of 1456.

Right around the castle and its walls, the splendid old town centre develops, characterised by the interweaving of alleys and winding stairways, like a labyrinth of ancient stone buildings, which still retain their most typical features, such as the small courtyards or internal gardens or the rich decorations, friezes and stuccoes dating back to the noble families who owned them at the time.

It is usual to think that every Italian city has a single historical centre, but in reality in Campobasso the citizens count two. This is because at the beginning of the nineteenth century the so-called Murattian centre was born, so called because of Joachim Murat, the then King and General of the Kingdom of Naples, who at the time also included Molise. Thus was given a new and modern urban planning, with wider and more orthogonal streets, monumental palaces, a lot of green space and several fountains. Thus Campobasso became a small garden-city.

Old town - what to visit?

Among the most beautiful places to visit in the historical centre of Campobasso there is certainly the Monforte Castle, from which you can also enjoy a beautiful view of the city and the landscape of Molise. Walking in those areas you can easily reach the Church of San Giorgio, the oldest in the area and one of the symbols of the medieval centre dedicated to the Patron Saint. A little further down we meet the Torre Terzano, also built in rough stone of the place and part of the ancient defensive system that included other walls and structures, now disappeared. Nearby there are several historical public and private buildings, churches, and two beautiful museums: the Pistilli Palace Museum and the Sannitico Museum. The first is a splendid picture gallery, born from the confluence of the art collection belonging to Michele Praitano and that of Giovanni Eliseo. We are talking about about 200 works among which mainly paintings by Molise and Neapolitan authors with a great representation of works between the seventeenth and nineteenth century.

The second museum is one of the most important archaeological museums of the whole region. The large exhibition of finds from the ancient historical-geographical area of the Sannio is now housed in Palazzo Mazzarotta, dating back to the sixteenth century. The finds on display inside are divided into macro areas and follow mixed thematic-chronological exhibition criteria, with very interesting materials ranging from Prehistory to the Early Middle Ages.

Murattian town centre - what to visit? 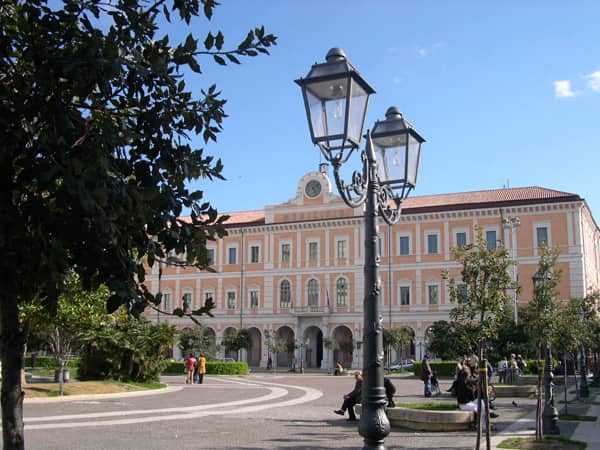 Here we are in the Murattian centre, the most monumental and modern part of the city but widely recognised as a "centre" on a par with the medieval one. Also this part of Campobasso reserves several beauties and activities not to be missed. Let's start with the Museum of Mysteries which collects a series of objects related to the Festival of Mysteries, a folkloristic and religious festival held every year, in which a series of wooden floats pulled on shoulders, originally designed by the sculptor and craftsman Paolo Saverio di Zinno, on which there are costumed figures who stage religious episodes. The procession is followed by all citizens and is becoming an increasingly popular and appreciated festivity even outside the regional borders.

Very close to this place we can take a nice walk in a public park of eighteenth-century origin and which was donated to the community by its last owner Marianna de Capoa in 1875. The Villa de Capoa is therefore one of the urban gardens of an already very green city, so we recommend a visit if you are in town.

Interesting is the very central Piazza Vittorio Emanuele II, bordered by the Palace of Justice and Palazzo San Giorgio, today the town hall. This square is also known by the locals as "Largo della Libera" because of the church of the Madonna della Libera incorporated in the same town hall.

Campobasso is a courteous and charming town, built in greenery and on a human scale. It is a beautiful discovery for all lovers of nature, history, good food and walks. We recommend a visit!