Cremona: the city of music and art

Cremona is a city and province of Lombardy where you can spend a beautiful day, between music and art. The small town center captivates with its unique monuments and the presence of music. In fact, Cremona, city of the violin, in 2012 became part of the Unesco Intangible Cultural Heritage, for its violin art making.

Where is Cremona located?

Cremona is located in the middle of the Po Valley on the Po River and can be reached from the other provinces of Lombardy, by car, by train, or by bike using the cycle paths along the Po River, which also connects Cremona to Piacenza, in Emilia Romagna.

Historically this city, for its location, has always been important both economically and politically. It was originally founded by the Celts and later in 218 BC, the Romans arrived and established their military outpost to control the area.

What to see in Cremona

The small town center captivates with its medieval structure: the town square (piazza del Comune) with its unique monuments, the different churches and the presence of music. In fact, Cremona, city of the violin and music, in 2012 became part of the Unesco Intangible Cultural Heritage, for its violin craftmanship. Here, more than 500 years ago, the violin was born and nowadays violins are still made hand-made with precious woods, according to the tradition of Master luthiers.

In one day you can visit the monuments symbol of the city, take a nice cultural walk, listen to good music and try some local dishes. The visit starts from the Town Square (piazza del Comune), the heart of the historical city center, easily reachable on foot from the train station, in 15 minutes. Here we find the Baptistery, the Cathedral, the Town Hall, the Loggia dei Militi and the Torrazzo.

It is the oldest monument in the square and one of the most beautiful Romanesque cathedrals in Lombardy. Over the years its structure has been modified with the addition of Gothic and Renaissance elements. The white marble  façade has a large central rose window and a two-storey loggia with beautiful statues.

The interior of the Duomo houses important works of art. We have the Great Altar Cross - 3 meters high, the remains of the Ark of the Persian martyrs - sixteenth-century work in Carrara marble - and an extraordinary cycle of frescoes (early 16th century). Among the frescoes, the Crucifixion, the Deposition and the Resurrection by the Mannerist painter Pordenone, stand out for their beauty. Thanks to this cycle of frescoes, the Cathedral of Cremona is named "Sistine Chapel of the Po Valley". 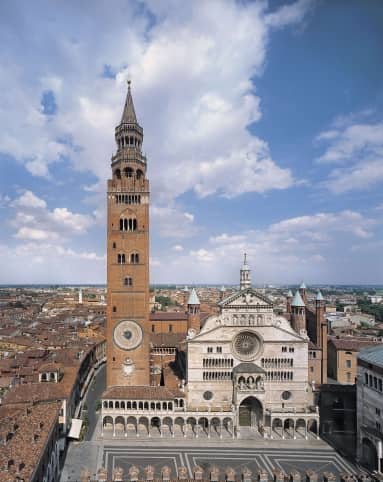 A beautiful Renaissance portico connects the Duomo to the Torrazzo.

The Torrazzo, symbol of the city, is the oldest brick bell-tower in Europe (112m). 502 steps lead to the top of the tower from which you can enjoy a beautiful view of the city and surroundings. The building consists of two different overlapped towers: a Romanic tower that dates back to 1267 and a second one with a cusp and an octagonal layout. On the façade, there is a beautiful 16th century astronomic clock, that still works with its original machanism. The astronomic clock of the Torrazzo is bigger than the famous Big Ben in London!

At the end of 2018, the Vertical Museum was opened in the Torrazzo tower. By visiting the Vertical Museum, you can see the interiors of the tower. The Dial Room and the Room of the clockwork show the characteristics of the clock's functioning. The Room of Time-measuring and the Astronomy Room illustrate the history of the motion of the stars. In addition to this, there is also a beautiful installation of the Focault pendulum, which with its motion demonstrates the rotation of the Earth.

The visit of the Torrazzo is something special and is a must!

The Baptistery, the Lodge of the Militia and the Town Hall

Next to the Duomo, we find the Baptistery of Cremona. The Baptistery, whose construction began in 1167, has an octagonal structure and mixes the Romanesque and Lombard-Gothic styles. Inside, in addition to the baptismal font you can admire the statue of the Archangel Gabriel and three altars.

Two other monuments of civil architecture stand around the square: the Lodge of the Militia and the Town Hall.

The Lodge of the Militia is the place where the assemblies of the the richest and most important inhabitants of the city, used to take place. It’s a one-storey building with a large portico where we find another symbol of Cremona: Hercules, which holds the coat of arms of the city.

The Town Hall, seat of the city government, is the symbol of civil power and is located in front of the Cathedral, the symbol of religious power. Originally the palace had only one large hall used for political meetings. Nowadays, inside the palace there are several rooms and two important paintings of the Genovesino, a talented but not so famous painter of the seventeenth century.

In the Town Hall square you find the Infopoint where you can get the map of the city and a lot of useful information for your visit. Here you can also book a guided walking tour to discover the corners and details of the main monuments and the old town! 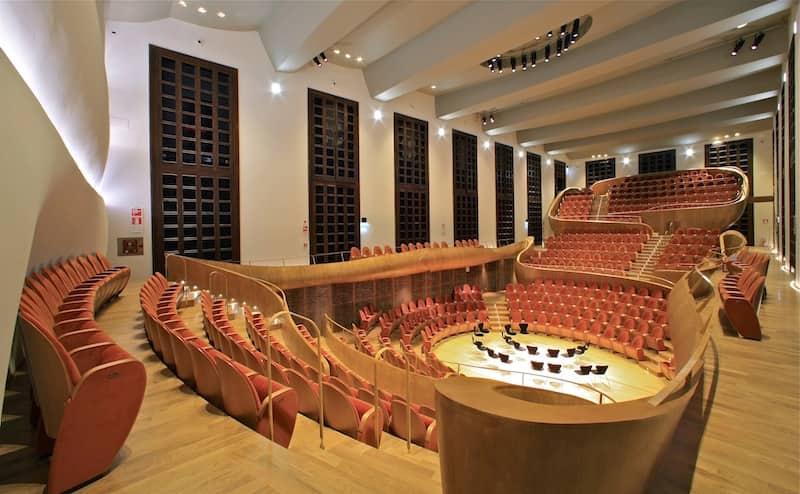 The violin is another symbol of the city! The Violin Museum was opened in 2013 and it’s dedicated to the master luthier Antonio Stradivari and the violin craftmanship.

Here are kept the most important instruments of the master violin makers: Stradivari, Amati and Guarneri. You also have the opportunity to see the violin making workshop, that shows how a violin is made and what techniques and materials are used to create this elegant instrument.

In the Violin museum there is a special place: the "Giovanni Arvedi" Auditorium.

Designed by the sound engineer Yasuhisa Toyota, it’s a wooden sculpture that resembles a violin. The stage is in the center of the hall and the audience all around. This Auditorium has been designed to have perfect acoustics, for a unique listening experience. By paying a separate ticket, you can attend the auditions of soloists who play the instruments of the historical collections of Stradivari, Amati and Guarneri. It is worth trying this exciting and unforgettable listening experience! 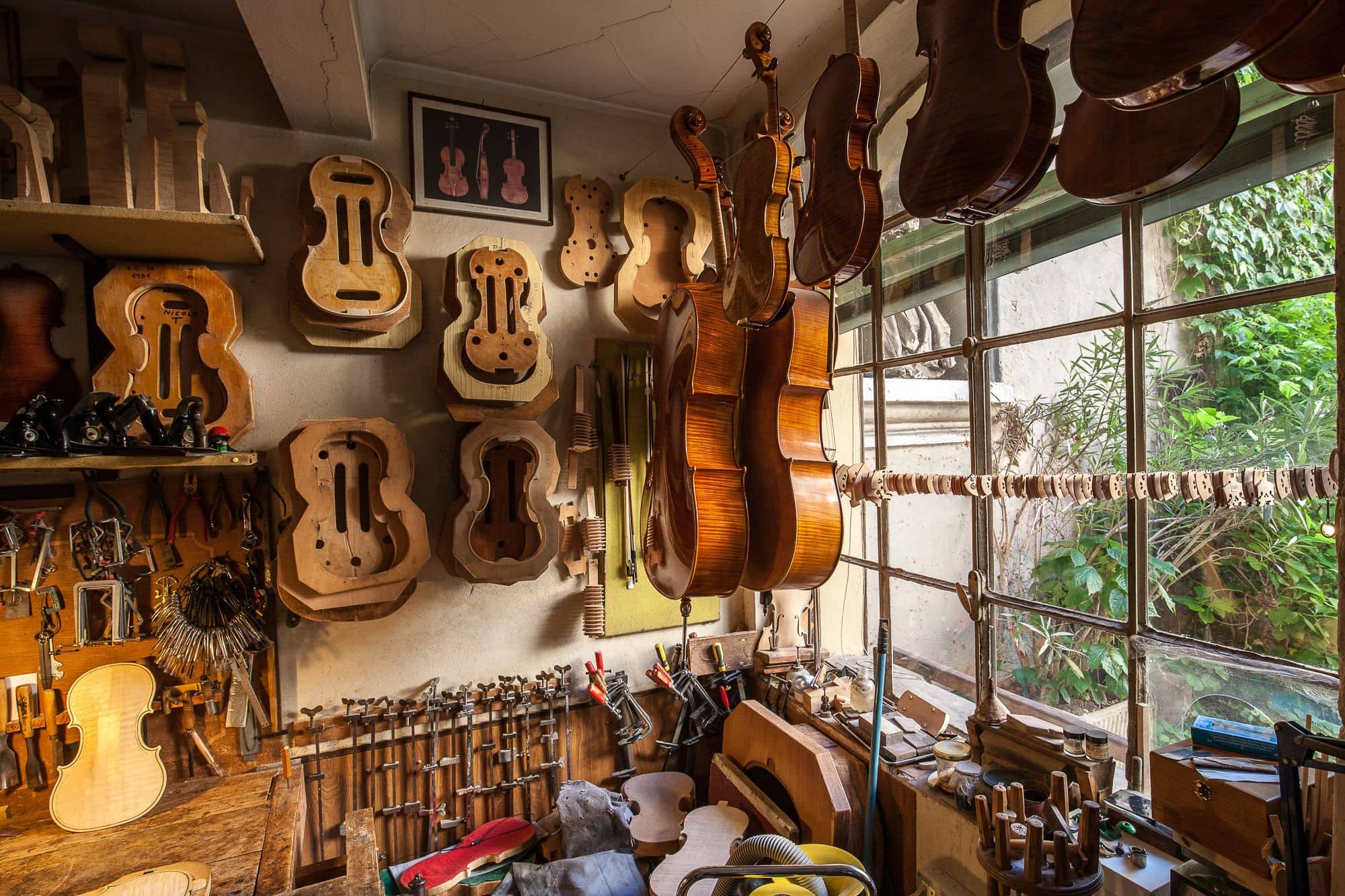 After visiting the most important monuments, it’s time to relax between music and delicious flavors.

Walking through the center of Cremona, you will often hear the sound of a violin. Among the alleys of the center, you can admire about 140 artisan luthier workshops. This ancient art started five centuries ago with the luthier Andrea Amati, followed by the famous Antonio Stradivari. In some workshops it is possible to make guided tours with a luthier who explains how to become a luthier and how to build a violin or other string instruments. At the Cremona Infopoint you will receive all the information you need to book a visit to a violin making workshop.

After the luthier workshops you should stop at the historical shops of the typical products of Cremona, such as Torrone and mustard. The windows of these shops definitely attract the attention for their colors, chocolates, nougats, jams and mustards. You will also see many historical pastry-shops where you can taste the homemade Torrone and also Pan di Cremona, a cake made with almonds and covered with chocolate.

Cremona’s cuisine is tasty and also a bit caloric but for sure, among first courses, second courses and desserts, all palates will be satisfied!

For an excellent lunch or dinner, there are many traditional restaurants (osterie), where you can taste the typical dishes of Cremona.

One of the most popular dishes to be tasted is Marubini.

Marubini is a pasta with a filling prepared with braised meat, Cremonese salami, Grana padano and nutmeg. Normally they are cooked and served in a broth made with three different types of meat. It can also be served with a meat sauce or a sauce made with vegetables and cheese.

You can’t leave the city without eating a piece of Torrone, the hard cake with a rectangular shape, made from whipped honey, almonds and egg whites.

Other tourist attractions to visit

For those who have a few more days, Cremona offers other interesting attractions. Outside the historical center, about 40 minutes walking distance, there is a beautiful church that is worth a visit: the Church of San Sigismondo. The interior of the church is decorated with a wonderful cycle of frescoes that is a fine example of Lombard Mannerism. A very important cerimony took place here: the marriage of Bianca Maria Visconti and Francesco Sforza. With this cerimony the Sforza dynasty began and the court pastry chefs created a new cake for this special occasion: the Torrone.

For museums lovers, I recommend the "Ala Ponzone" Museum that collects more than 2000 works including paintings, sculptures and a collection of historical musical instruments. Among the most important paintings, you can see Saint Francis in meditation by Caravaggio and L'ortolano by Giuseppe Arcimboldi.

If you visit Cremona in November, you will attend the Torrone Festival that takes place every year and attracts more than 250,000 greedy visitors! The old town is filled with stalls for this gastronomic-cultural event that offers a rich program. Cultural events, tastings of torrone from all over Italy and shows, like the beautiful historical re-enactment of Bianca Maria Visconti and Francesco Sforza’s wedding, with a historical procession of more than 100 people dressed in traditional costumes.