Sant'Angelo is one of the most fascinating and characteristic villages on the island of Ischia, the ideal place to get away from the hectic city routine and find your serenity by fully immersing yourself in the slow and regenerating island life.

The Island of Ischia, the six municipalities and the village of Sant'Angelo

The island of Ischia is the largest of the islands in the Gulf of Naples and offers a wide variety of accommodation and holiday opportunities: although it has an area of only about 47 square kilometres, there are six different municipalities with different administrations: Forio, Ischia, Lacco Ameno, Casamicciola, Serrara Fontana and Barano.
The village of Sant'Angelo is part of the municipality of Serrara Fontana, which includes both part of the island's only mountain, Mount Epomeo, and an outlet to the sea with the promontory of Sant'Angelo.
The small village is ideally divided into two parts: Sant'Angelo bassa and Madonnella.
The area at the foot of the promontory called Sant’Angelo Bassa (Lower Sant'Angelo) includes the small square with its luxurious boutiques and entertainment venues, the small island accessible by a small strip of land and finally the characteristic little harbour, where in summer you can admire numerous yachts and private boats belonging to tourists, often from abroad, who come to the island in their own boats to enjoy the summer months in this dream location with its crystal clear sea. Perched on one side of the mountain sloping down towards the sea we have the Madonnella area, formed by a tufa ridge that includes the upper part of the village where we find the Parish of San Michele, the cemetery and numerous luxury hotels. The houses, leaning against each other, are mostly white, but it is possible to see some pink or yellow spots that recall the style of Mediterranean villages. All the dwellings have been carefully decorated down to the smallest detail. Each one is adorned with ceramic tiles finely decorated with floral and fruit motifs, placed next to each wooden door or gate where the address and name of the tenants or simply a particular name given to that dwelling are indicated. Finally, cascades of flowers cover the walls, balconies and terraces and with their bright colours bring the whole village to life.

Strolling through the village streets

Strolling around Sant'Angelo, it is easy to get lost among the endless alleyways that wind between the houses of the Madonnella and it is often easy to take a wrong turn, even for those who are native to the island, and find yourself discovering new views and terraces from which to enjoy a breathtaking view. When darkness falls, the tangle of narrow streets lights up, illuminated by the numerous lamps placed along the way, which together with the lights of the houses give the village a magical, surreal atmosphere. Observing this spectacle from afar, one has the impression of admiring a real postcard.

Something that will certainly strike you as soon as you arrive in Sant'Angelo is the complete absence of cars, making the village an ideal place for long walks and bike rides, immersing yourself in the sounds of nature, from the waves breaking on the cliffs to the blowing wind. The only motor vehicles that are allowed to circulate are small electric cars used to supply the local businesses with raw materials, replacing the mules that were once used by the locals to move and transport goods.

Since ancient times Sant'Angelo has been a fishermen's village that made of the catch their main source of sustenance, both alimentary and economic, since it was a precious exchange commodity to be used with the inland districts that supplied them with wine, meat and land products.
Moreover, the presence of the sea favoured the development of trade, in fact materials such as wine were exported thanks to the small port with large boats. The exchanges between the population of the hinterland and those who came from the mainland were regulated by figures called 'O sanzaro', mediators who were in charge of putting sellers and buyers in contact and of their negotiations. This role was usually played by the inhabitants of Sant'Angelo who made the small port a real thoroughfare for all those interested in buying products from the inland districts. Very unusual was the exchange of wine, which was brought from the neighbouring districts and stored in large tanks lined with glass tiles and then decanted into wooden barrels. Then, as the boats were too big to enter the small harbour, they would stay at sea and people would swim the barrels with the wine, which would float on the water, enabling them to carry them to the boats. This particular practice was carried out because the small fishing boats were not suitable for carrying the large, heavy wooden barrels, which could weigh up to 300 kilograms each. Today, only a few inhabitants still bottle wine, and mainly for personal use, although there are still establishments that offer their guests home-made wines.

Succhivo, a district of yesteryear

Less than a kilometre far from Sant'Angelo, there is another small village: Succhivo. Among the districts that produced wine in the past were Serrara, Fontana, Ciglio and Succhivo, where today, walking through the narrow streets, 'e curtegl' in Ischitan dialect, you can see splendid citrus groves and luxuriant gardens. Then the church of Santa Maria di Montevergine founded in 1684 by the Mattera family and then guarded by two hermits. In this hamlet, surrounded by an atmosphere of times gone there is the Hotel Villa Tre Sorelle. This is a family-run establishment, named after the three sisters Angela, Maria and Brigida, the founder's daughters. Here you will be warmly welcomed and together with your comfortable stay you will have the opportunity to taste the typical Ischitan cuisine with fresh and genuine ingredients at 0 km, such as seasonal fruit, bread, eggs and the catch of the day wisely elaborated by Chef Massimo and enriched with aromatic herbs that grow on the island. On their tables you will also find the Ischia's wine which, as in the past, is produced from indigenous vineyards and winners of numerous awards and wine events. In this little corner of Paradise you will also enjoy the benefits of the thermal waters, one of the many treasures that the Island of Ischia has to offer.
The Hotel Villa Tre Sorelle is only 15 minutes from the village of Sant'Angelo and as you stroll through the streets of Succhivo you will be accompanied by the marvellous view of the village, by day with its cheerful colours and in the evening by its suggestive lights.

BOOK YOUR HOLIDAY IN SANT'ANGELO HERE❯ 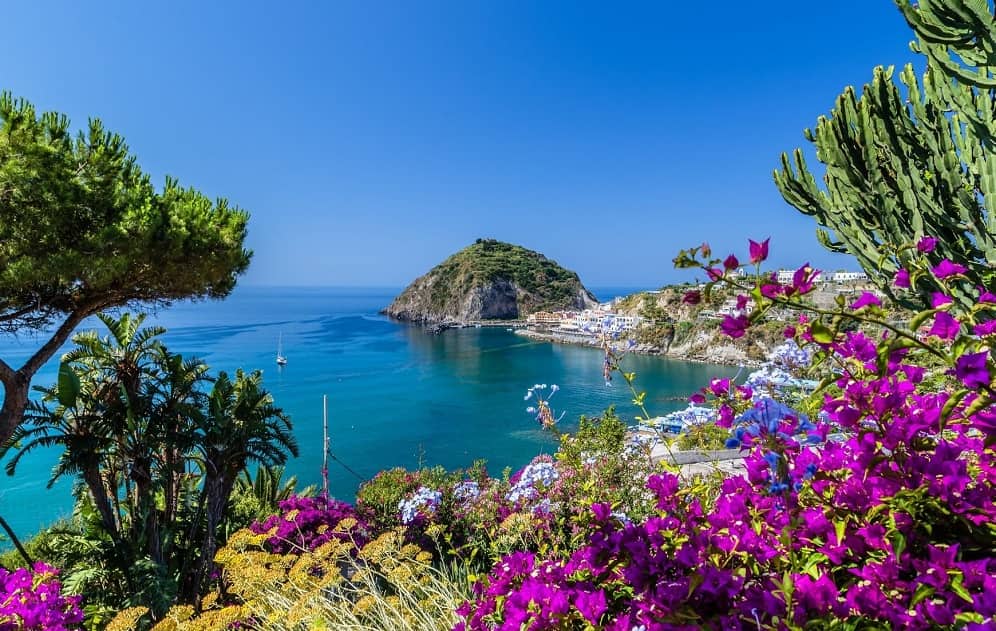