Camigliatello Silano: a town among the Calabrian mountains to be discovered all year round

A journey through the small town of Camigliatello Silano: a true paradise in the heart of Sila, for lovers of nature and the flavors of the earth.

A small town, great for its tourist importance

Mountain hamlet of the municipality of Spezzano di Sila in the province of Cosenza, Camigliatello Silano is an urban nucleus of about 1,000 inhabitants located 1,272 meters above sea level. It is considered a small pearl of the Sila National Park, which includes the homonymous mountain area that crosses the provinces of Cosenza, Crotone and Catanzaro from north to south. Despite the presence of a single main avenue about 600 meters long which includes a small green space ideal for a break, Camigliatello Silano is a very well-known resort for tourism throughout the year, thanks to the many excursion possibilities that the area offers and thanks to the skiing facilities it holds.

Festivals that give value to typical products While visiting Camigliatello Silano you can take part in two festivals that promote gastronomic delights of the silana tradition. Starting from August until the beginning of September you will be able to participate at the Sila Potato Festival, where you will taste the flavors of the earth while enjoying culinary shows, cultural meetings and street performances, as well as local handicrafts. Every second weekend of October from 1969, the Mushroom Festival fills the town with a festive atmosphere: a popular event that begins on Friday and lasts for three days, characterized by tastings of various mushroom specialties, other typical products of the Calabrian rural tradition and characteristic folkloristic shows; all accompanied by the evocative “foliage”, that is the autumnal fall of the leaves from the trees that fill the streets with autumn colors.

The narrative that becomes art through the Ship della Sila In Camigliatello Silano it is also possible to visit the Narrating Museum of Emigration called Nave della Sila. Inaugurated in 2005 in a renovated cowshed, the Museum contributes to fill a historical and civil memory lapse related to the migratory phenomenon of the Calabria region. The Ship of the Sila will guide you towards a path that analyzes the migratory past towards distant lands such as Australia, Brazil, Canada or Argentina, and the current reverse process of immigration, which sees the region as a land of hospitality. In July 2013, a new section called “Mare Madre” (Mother Sea) was opened: a story to remember the tragic journeys of immigrants on the run from suffering lands. The section is characterized by an audiovisual experience, with images and stories taken from documentaries by Andrea Segre, narrated by the poet and writer Erri De Luca.

A paradise for sports and hiking Destination for many tourists is the Tasso Camigliatello Silano Nature Reserve: a protected natural area within the Sila National Park located at about 500 meters from Camigliatello Silano towards Spezzano della Sila. With the purpose of preserving the genetic heritage of the Sila forest and rich of flora and fauna, the reserve has paths to discover nature, with certain spaces where you can stop for a picnic. During the spring, summer and autumn months, the enormous tree-lined expanses adapt to all kinds of outdoor sports, such as mountain biking, thanks to a series of cycle-tourist routes; trekking on the many paths traced by the CAI (Italian Alpine Club); horseback excursions at the numerous stables located within the National Park; orienteering, bio and bird-watching and archery. It is also possible to visit farms open to the public. In the neighboring towns you will also have the opportunity to practice canyoning, sailing and canoeing, at the Arvo lake and Ampollino. In the winter season you will have the chance to practice alpine skiing and cross-country skiing, in due to the opening of the ski lifts and the three slopes available. In 1982 Camigliatello Silano was the location for the arrival of the eleventh stage of the Italian Cycling Tour and will be the seventh stage of the Italian Cycling Tour in 2020.

A steam locomotive that will take you back 90 years 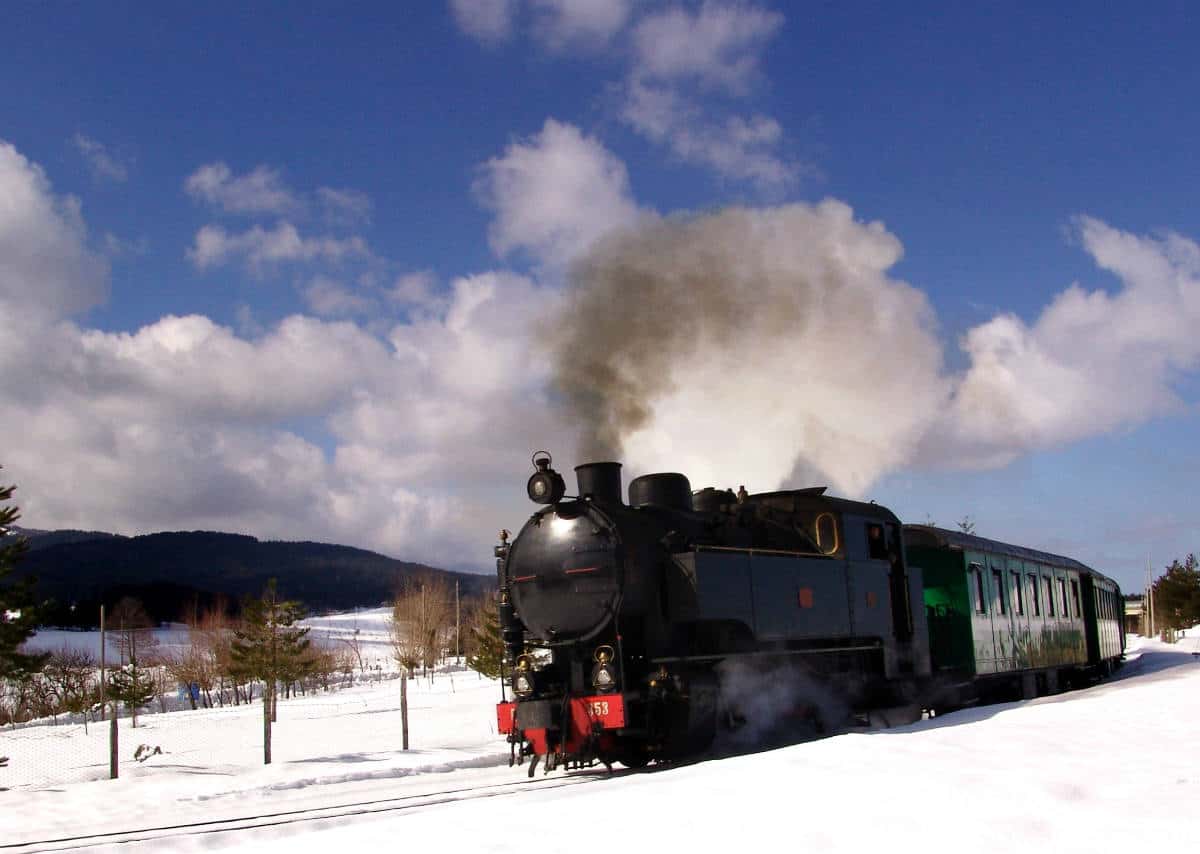 Camigliatello Silano is one of the three stops on the journey from Moccone to San Nicola Silvana Mansio, a journey aboard historic coaches of a steam locomotive dating back to 1932. At a cost of € 15.00 for adults and € 8.00 for children, you can experience a trip through time of enormous cultural and landscape value, through the fascinating places crossed by the railway line. The races are possible only and exclusively on weekends. From Camigliatello Silano it is easily possible to reach Cupone, a tiny hamlet of Spezzano della Sila on the shores of the Cecita artificial lake. Exactly like Camigliatello Silano, the town allows you to access various itineraries to visit the Sila National Park, as well as the botanical garden, the geological garden and the naturalistic museum. In this area have been found ancient testaments dating back to the Paleolithic: thousands of finds including vases, flint tools and obsidian, stone axes, which are assets taken into custody by the Superintendency for Archaeological Heritage of Calabria.