Best seaside destinations in Lazio: 5 ideas for the Summer

Summer brings along whit it the urge to escape the heatwave in the city. Cool off with a swim in the sea becomes almost all you can think about. Those looking for a seaside destination in Lazio will be satisfied. No matter if your priority is fun or relax, beaches and sea of the Tyrrhenian are waiting for you!

Anzio is a seaside town of Lazio close to the capital, is located about 60 kilometres (37 miles) south of Rome. A former capital of the Volsci, today the popularity of the area is mainly due to the tourist interest of beaches and sea. The Foundation for Environmental Education has repeatedly awarded the place with the Blue Flag, seawater and seacoast quality indicator. There are free beaches for tranquillity lovers, but especially bathhouses for families who go to the seaside with children and need all amenities.

Santa Marinella is a seaside town of Lazio among the most appreciated. It is located less than 60 (37 miles) kilometres from the north of Rome, near the Tolfa Mountains. Also known as the pearl of the Mediterranean Sea for the elegant and refined scenery. The long coastline is tendentially irregular, rugged, rocky and rich in inlets. After some intervention of requalification, it’s possible to benefit from parts of the beach completely sandy. The seawater is generally fresh and clean. The morphology of the cost allows surf lovers to practice this sport. In this regard, we are talking about one of the main meeting points at Italian and European levels.

San Felice Circeo, Sabaudia and Gaeta: seaside places of Lazio in the province of Latina 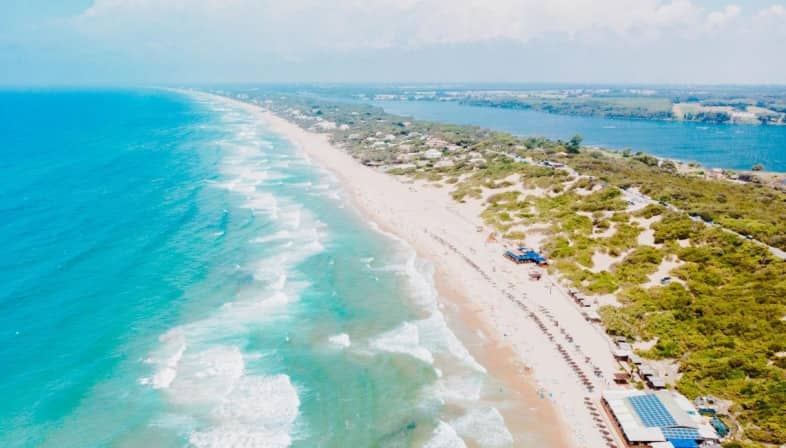 Talking about seaside towns of Lazio, we obviously cannot help but mention the coastline of San Felice Circeo, located in the homonymous National Park, in the province of Latina. The park boasts a large area and contains inside the beauties of the flora and the fauna of the Mediterranean shrubland. You can enjoy a wonderful sea, as evidenced by the Blue Flags repeatedly awarded over the years. The seafront alternates stretches of sandy beach, mainly occupied by bathing establishments, and rocky and wild frames, especially proceeding towards the mountainous area of the Circeo Promontory. Right there, in the promontory area, there are a lot of caves to explore. Some of them can be reachable on foot or by sea, while others are still today inaccessible and secret. Just like San Felice Circeo, Sabaudia is a seaside town of Lazio located in in the Circeo National Park and bordered by three coastal lakes: Lago di Paola, Lago dei Monaci and Lago di Caprolace.  The town was built as a result of work for the reclamation of Mussolini. His architecture is a clear model of typical fascist functional design. In Sabaudia, the coastal stretch starts from Mount Circeo, continues towards the Torre di Paola until the beach of Bufalara. In the middle of this route is it’s easy to find equipped bathing establishments. You can also find free beaches nestled in a natural and wild environment. Dunes, covered by Mediterranean vegetation, are typical of the coastal landscape of Sabaudia. Gaeta is one of the most beautiful and suggestive seaside places of the Lazio. Located in the homonymous gulf in the province of Latina, is just over or less than 100 kilometres (62 miles) from Rome or Naples.  The cultural heritage of the medieval period boasts sites of great interest, like the Aragonese-Angevine Castle in the historical centre of the town. However, what mainly catches the attention of tourists and visitors during the summer, is the sinuous coastline. It traces the perimeter from the side of the Montagna Spaccata to the Sperlonga Caves. The coastal stretch counts seven different beaches united by fine and golden sand and a crystal clear sea. Serapo and Bay of Saint Agostino are the main beaches. The first is easily reachable from the medieval centre, while the second one is the longest and the busiest.