Basilicata on the road: our journey in 4 must see places

A surprising road trip in Basilicata, a region that rhymes with adventure. We will take you through space landscapes, ancient cities and ghost towns. We'll fly through the mountains at 100 mph and... dance with the witches. Are you ready? Buckle up!

Our on the road journey starts in Calabria. Just the time to load our luggage into the car, and off we go to Basilicata. Out of the window, the vast valleys and hills of the northern part flow quickly and colourfully.

We are still far from the region's trademark barren, lunar landscapes and incredible views that make this part of Italy seem out of the world.

Indeed, much of Basilicata can be described as "out of the world" and extraordinary. From the badlands moulded into the clay to the deep incisions of the ravines near Matera. From the high, animal-shaped spurs to the villages sprouting from the rock like a natural granitic extension.

Being amazed in Basilicata is a prevalent emotion, and it will happen to you again and again while exploring this mysterious and fascinating territory.

Things to do and see in Basilicata

Still not overcrowded by aggressive mass tourism, Basilicata is a perfect holiday destination, whatever your idea of a holiday is. Kilometres of beaches, bays and small rocky coves await you along the coast, lapped by the region's two seas, the Tyrrhenian and the Ionian.

Furthermore, it is also home to Italy's largest national park, the Pollino, on the Calabrian border. What better location for adventurous trekking, rafting and canyoning? You'll find a genuinely wild and sovereign nature, with wooded slopes of pine, maple and beech trees laying below the bare peaks of Mount Pollino.

And then, folklore. Lucania is an ancient land, still closely tied to its deepest roots to which the population - less than 600,000 inhabitants - is viscerally attached.

Lucanians, Greeks, Romans, Lombards, Byzantines, Saracens and Normans dominated the land. In recent years, it has been experiencing a period of happy rediscovery driven by the renewed popularity of Matera, the majestic film set of Mel Gibson's blockbuster The Passion and the European Capital of Culture in 2019.

It is precisely Matera that comes to mind when talking about this region. We decide to keep the iconic city of Basilica as our last stop. First, we head for two of the most beautiful villages in Italy. 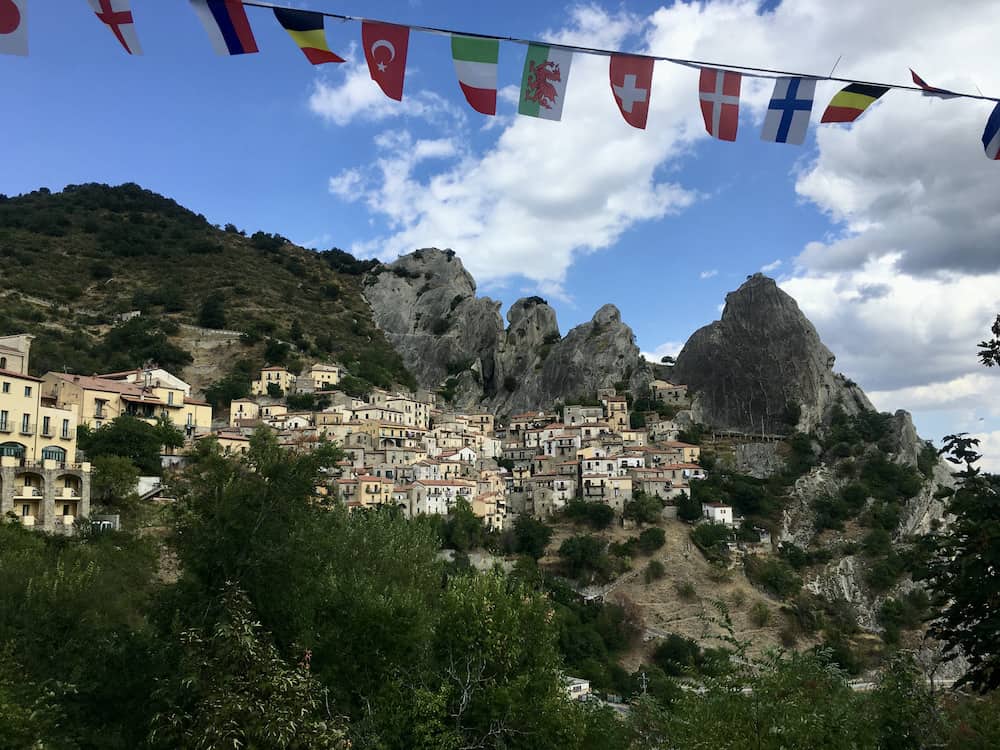 Curve after curve, among flocks of sheep, isolated farmsteads and cattle crossing signs, we approach the magnificent spectacle of the Lucanian Dolomites. That little presepe we see perched just below the rocky spires is our destination. We are in Castelmezzano, a panoramic medieval village that will make you dizzy, both because of its height and beauty.

Pasquale, the owner of the b&b where we are staying, warmly welcomes us, recommending the strenuous but suggestive trek that connects Castelmezzano to neighbouring Pietrapertosa and promising a hearty breakfast for the following day. "My wife prepares everything", he says.

We quickly store our bags and walk towards the old town centre: lots of stairs and steep climbs, narrow streets and cobbled lanes (behind which other stairs hide) and magnificent views over sheer cliffs. See the ruins of the Norman castle, the Coiro, Parrella, Merlino, Paternò and Campagna palaces and the Palazzo Ducale.

We nibble on some traditional Peperoni cruschi in a crunchy street food version and eat a panino stuffed with tasty local salami in the central Piazza Caiazzo, a magnificent terrace overlooking the Dolomites where the majestic Santa Maria dell'Olmo stands out. Dating back to the 13th century, the church contains a wooden statue of the Madonna and Child, a Baroque altar and a Holy Family by Girolamo Bresciano.

Refreshed, we follow our host's advice and head for the Percorso delle sette pietre (Seven Stones Trail), a literary path, complete with scenic installations and sound effects, crafted on the story Vito ballava con le streghe by Mimmo Sammartino. If, as in our case, the weather is a little gloomy and you don't meet many walkers, the thrill is guaranteed.

The trek is challenging, mainly because of the considerable height difference, but feasible without any special equipment. Along the way, you will notice the signs for the Ponte nepalese (Nepalese Bridge), a walk at 650 metres altitude that connects Salemm and Marcirosa climbing routes.

If you are a fan of the genre, you should know that Basilicata has the longest Tibetan bridges in the world. The record is held by Castelsaraceno, with its 590-metre walkway suspended in the air. For daring spirits only. 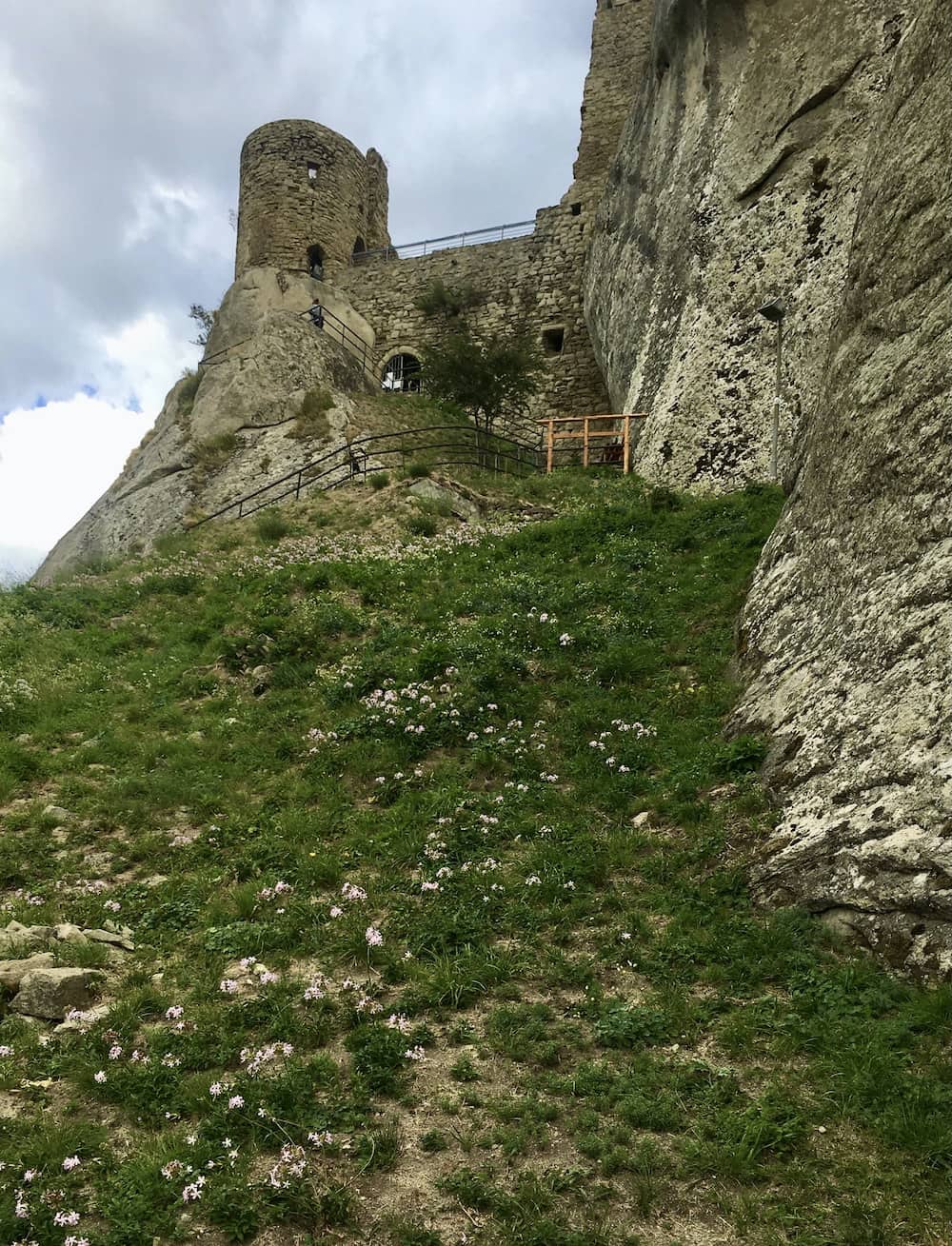 We arrive in Pietrapertosa at the end of a rather tricky climb. We are right next to the jagged peaks of the Dolomites: looking up, we can see a section of the via ferrata (Italian for iron way, a protected climbing route). Just a few minutes to recharge, we are ready to wander through the borgo, the highest municipality in Basilicata.

The beautiful Saracen village has a historic centre that blends in perfectly with the mountain, an arena of low houses, stately homes, refined stone portals and rupestrian churches. Visit the Chiesa di San Giacomo Maggiore, a treasure trove of Lucanian works of art ranging from the 15th to the 18th century.

We go as far as Arabata, a very narrow (and very high) Arab district, with small dwellings leaning against other small dwellings, which are in turn leaning against the bare rock. We are very close to the Norman fortress. Before going up the (umpteenth) climb that will take us to admire what remains of the old castle, we notice a lively bustle of people, helmets on their heads and smiles of tense euphoria on their faces.

They are the daredevils who have decided to fly. Yes, because here, you can enjoy the thrill of crossing the 1550 metres to Castelmezzano by gliding at 120 km/hr in Superman position along a steel cable. It's called the Volo dell'angelo (Angel Flight), but going that fast at 400 metres high, you'll feel like Clark Kent: adrenalin guaranteed.

We continue a few more metres and reach the highest point, tired but satisfied: the sweeping view from the perimeter walls of the Norman-Swabian castle is indescribable. On the way back, we retrace the Percorso delle sette pietre and manage to get lost; the trail is waymarked, but watch out for the signs: you might find yourself walking in a stream bed like us.

At dinner, a taste of the rich local cuisine is a must: Podolica meat and cheese, Arraganate potatoes and the inevitable Pepertoni cruschi. As we return to our B&B, we can't help looking upwards: the starry sky of Castelmezzano is the perfect ending to a day that had us exclaim a lot of "wow". 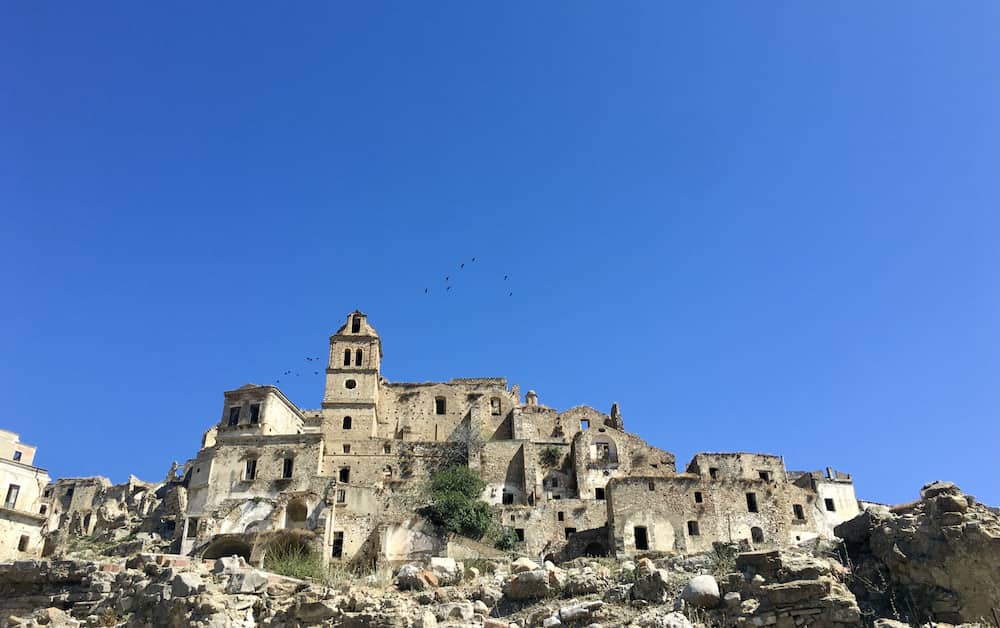 Craco is the next destination of our road trip. We gluttonously indulge too much in the breakfast promised by Pasquale, so we get back on the road a bit behind schedule. Our destination is now a ghost town.

Craco was abandoned in 1963 after a landslide, and its inhabitants moved a few kilometres away in the new Craco Peschiera. Today, the only wandering around peacefully beyond the fences are donkeys and a few sheep. It is not possible to enter the hamlet independently for safety reasons, but you can still visit the town on a guided tour.

A setting for numerous films, many tourists come here every year, attracted by the surreal and somewhat sinister atmosphere of this unmissable village surrounded by gullies.

The road we take is a succession of hairpin bends winding through thick green vegetation that will gradually turn into a Far West landscape: red ground and ochre grasslands where waves of clay emerge.

Before being eventually evacuated, Craco was a flourishing borgo, a strategic military centre and a university seat. In the 15th century, many buildings rose beneath its 20-metre-high Norman tower that still unmistakably outlines the cityscape. The place is also a World Monuments Fund site.

We give just a quick stroke to the lazy donkey watching us under a fig tree and then back in the car. This time we are heading for Puglia, but that's another story. We would return to Basilicata in a few days to visit the region's superstar.

Matera, the city of stone 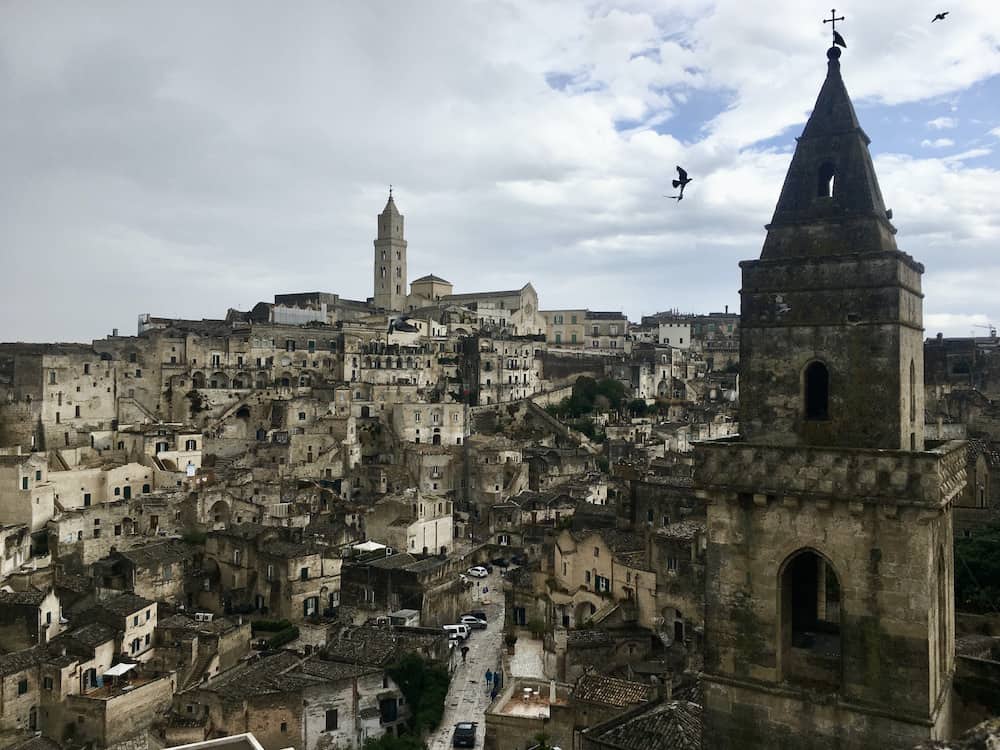 A sudden storm surprises us just before we arrive in Matera. The rain doesn't stop falling even when we park near an inviting norcineria (a kind of delicatessen). We take the opportunity to nibble on cold cuts and try the Caciocavallo podolico, one of Lucania's best-known products.

Suddenly, we are delighted by the sight of a street vendor sprouting up out of nowhere and, equipped with our new (and superexpensive) umbrellas, are finally ready to begin the exploration.

The walk to the old districts is lined with boutique hotels, trendy bars and ultra-modern spots that blend in perfectly with the urban design and architecture of the buildings. In between, there are panoramic terraces where you can shoot a lot of Instagram-perfect photos. From one of those, the Belvedere Guerricchio, we look out over the Sassi for the first time.

The exhibition of rock, roofs, and nature leave us speechless. It's strange to think that this UNESCO World Heritage site was once described as 'the shame of Italy. Casa Grotta, a cave house in Vico Solitario, well recreates the harsh rural life of yesteryear.

Matera needs (and deserves) more than one day, but we don't have much time and spend pretty much of it entering every church and historic building we come across while wandering among rocky outcrops, steep steps and stone alleyways. You should be smarter and study a plan of attack in advance.

A good starting point for a tour of the Sasso Caveoso is Casa Noha, which shows multimedia presentations of the city's history. From here, you can continue to Piazza San Pietro Caveoso and its namesake church; also, linger in the large square: this is a unique vantage point over the Murgia Park.

Other recommended stops include the rupestrian churches of the Madonna dell'Idris and San Giovanni in Monterrone, both carved out of the tuff, and the 16th-century Palazzo Pomarici, featuring a collection of works by Picasso and De Chirico.

Then, don't miss the Civita, the high district between the two Sassi. You have to reach this rione to find the Gothic cathedral of the Madonna della Bruna. Visiting Matera requires some effort (and physical exercise), but few other places in the world retain the same mystical atmosphere of authentic antiquity. We leave aware of having seen only a tiny part of the "painful beauty" — as Carlo Levi wrote — of this timeless, almost biblical city.