Italy is full of famous art cities and well-known landscapes visited by people from the most different places in the world, but if you are looking for something distinct from the usual, an unique rarity, and you have week of time to spend in the country, here are some suggestions.

Italy is famous as a country full of wonders and treasures that extend throughout the territory: tourists come from all over the world interested in exploring and admiring them.

In this article, we propose 5 destinations located in different regions, unique in their kind and full of history, able to attract and amaze those who visit them:

The municipality of Barbarano Mossano, in the Veneto region, was born from the union of the municipalities of Barbarano Vicentino and Mossano in February 2018, about twenty kilometres away from Vicenza. This place hides unique treasures of their kind: the San Bernardino Cave, with traces of the passage of humans, animals and terrestrial stratifications dating back to the time of the Neanderthal man, known locally for having given refuge to the Franciscan friar Bernardino Campigli, famous for his preaching against witchcraft and usury in the fifteenth century; the Prisons, whose uncertain origins indicate that it is probably an outpost designed to protect the castle of Barbarano from Verona and Padua; the Valley of the Mills with three ancient mills surrounded by greenery, and Villa Montruglio, a delightful architectural testimony of the sixteenth century. 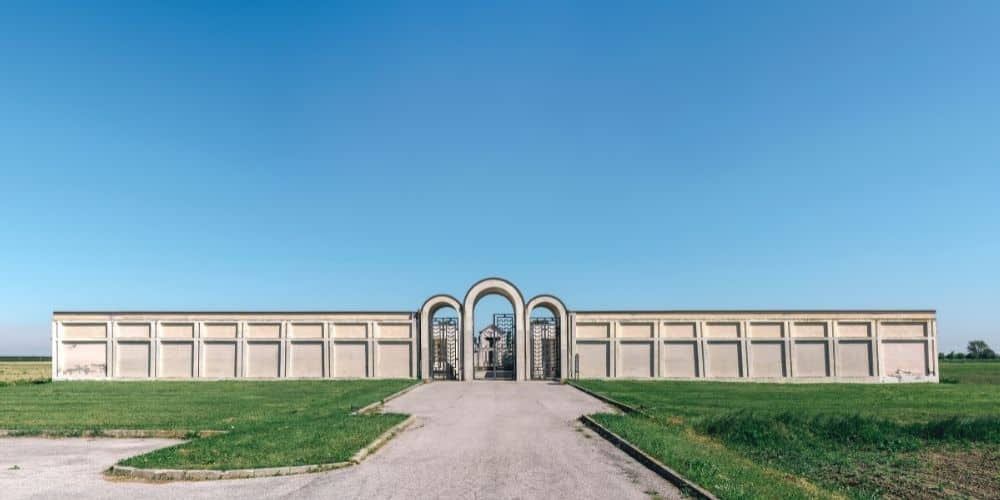 Tresigallo, City of Art in the Emilia-Romagna region and part of the Authentic Villages of Italy, 30km away from Ferrara. In the Thirties of the XX century, Edmondo Rossoni, a native of the place and at the time Minister of Agriculture and Forests, summoned the engineer Carlo Frighi, a fellow countryman, the landscape architect Pietro Porcinai, the travertine marble worker Francesco 'Cecchino' Guerra and the engineer Giorgio Baroni to transform Tresigallo into the capital of Italian rationalism. The aim was ideally to bring the emerging industrialization of the country closer to the peripheral communities. The city is known to art and architecture lovers for its appearance as a concretization of one of Giorgio De Chirico's paintings, or a film set by film director Wes Anderson.

Pizzo Calabro, a Calabrian village famous for the typical truffle that is produced locally, about a hundred kilometres away from Reggio Calabria: the truffle is a typical Calabrian pastry product, a delicious ice cream.
The point of interest is its Aragonese Castle, commissioned by Ferdinand I of Naples, where you can see a marble helmet made by the sculptor Antonio Canova, as a rest of a sculpture lost during the passage of Giuseppe Garibaldi, and the rooms part of the museum dedicated to Gioacchino Murat, King of Naples and marshal of the empire with Napoleon Bonaparte, imprisoned here and subsequently shot in 1815. The Mother Church of San Giorgio, built in the 16th century, houses a statue of Christ made by Gian Lorenzo Bernini and the tomb of Gioacchino Murat. Moving to the marvellous beach of the calabrian municipality, you can access the Church of Piedigrotta, which overlooks the sea, according to the legend carved into the rock by Neapolitan shipwrecks in the mid-XVI century to thank God for having had their life saved after a violent shipwreck: at the beginning of the XX century Angelo and Alfonso Barone, father and son as well as local artists, embellished the cave with statues carved from the rock itself with characters from the sacred scriptures.

Fiumara d'Arte: in the province of Messina, about 150 km away from there, is an open-air museum as several artists have created 11 contemporary works of art arranged between the municipalities of Castel di Lucio, Mistretta, Motta d'Affermo, Pettineo, Reitano and Tusa. This way, a sort of sculpture park is created between 1986 and 2010. Between 1986 and 1989 the first three came to light: in chronological order, the first creation is 'Matter could not exist', by Pietro Consagra. Later, Paolo Schiavocampo created 'A curve thrown behind time' and then Tano Festa executed 'Monument for a dead poet'. In two years, between 1989 and 1990, four works took shape: 'Room of a golden boat' by Hidetoshi Nagasawa, 'Mediterranean energy' by Antonio Di Palma, 'Labirinto di Arianna' by Italo Lanfredini, 'Arethusa' by Piero Dorazio and Graziano Marini. Between 1991 and 1993, several artists brought to life the works 'Atelier sul mare', 'Domestic museum' and 'The wall of life'. The last sculpture dates back to 2010 by Mauro Staccioli and it is '38 º parallel - Pyramid '. Recently this contemporary art site has returned to the limelight thanks to the video clip of the song 'Klan' by the Italian singer-songwriter Mahmood, winner of Sanremo 2019 and famous worldwide thanks to his second place in the 64th edition of the Eurovision Song Contest 2019. 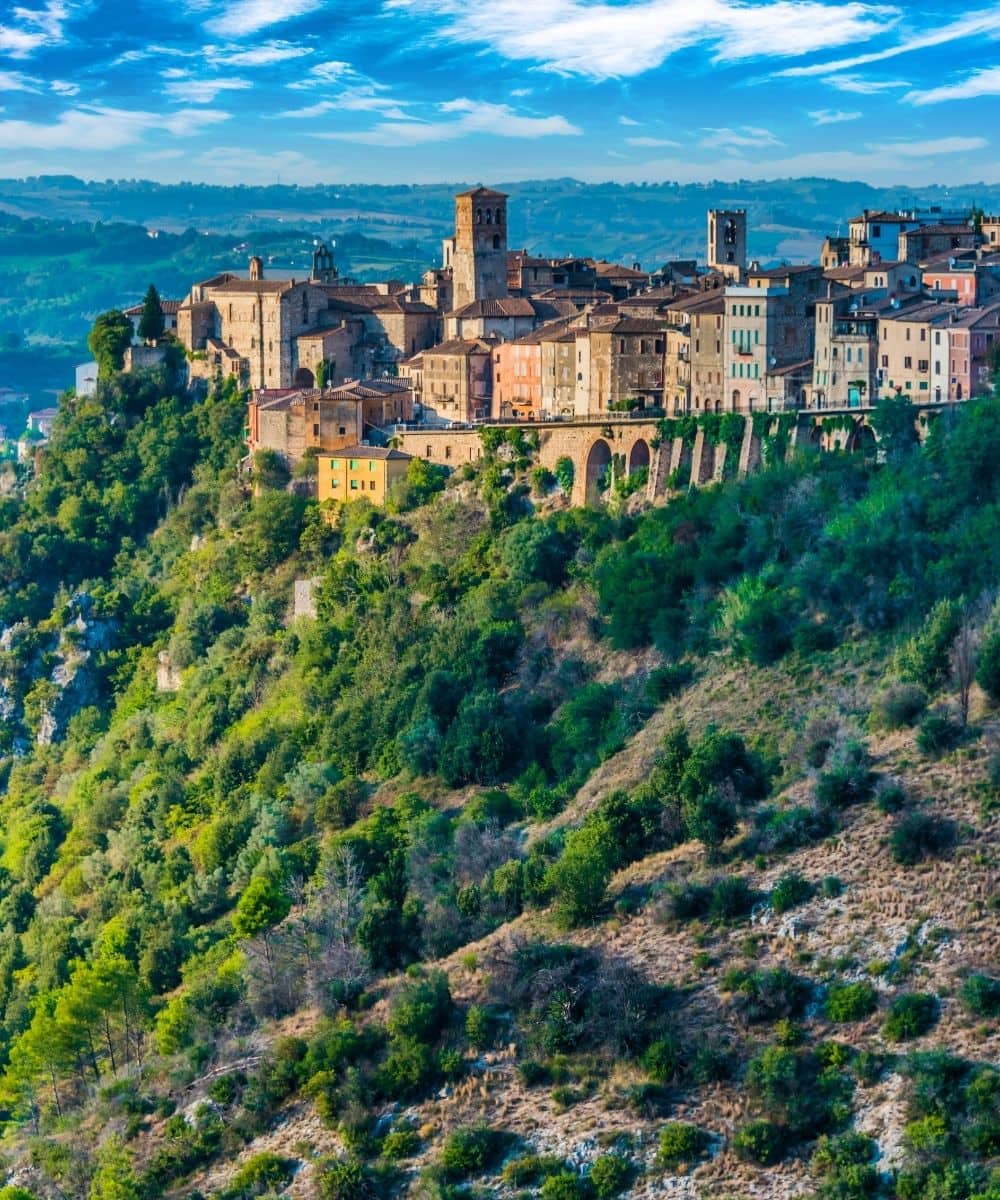 Narni, an Umbrian town 70km away from Assisi known by lovers of fantasy-literature as it is believed to be the inspiration for Clive Staples Lewis, author of 'The Chronicles of Narnia'. According to a local medieval legend, it is said that a griffin lived between Narni and Perugia, against which the two enemy cities had allied themselves to kill him: defeated, Perugia kept the bones of the creature as a trophy while Narni the skin, reason for which in the Narnese coat-of-arms the griffin is red and not white like the Perugia’s one. Points of interest in the city are the Rocca Albornoziana built in the XIV century; the Roman bridge of Augustus wanted by eponymous emperor; the 'underground Narni' consisting of hypogea and spaces used in the past by monastic orders and local population; the Cardona Bridge, part of the Roman aqueduct of Formina, and the Spring of Feronia, dedicated to the goddess of fertility. From a religious point of view, the most important places of worship are the Speco di San Francesco, the cave where the saint retired to pray in the 13th century; and the Church of Sam Francesco built in the place where the saint lived for a few days following his death.