10 Things to do in Perugia

The visit of Perugia can only start from the central Piazza IV Novembre, the living room of the city and is the starting point of the five city streets. On the square, seat of the ancient Roman Forum but of medieval plant, overlook some of the most important historical buildings of Perugia, from the Palazzo dei Priori to the Cathedral of Perugia. Currently the square is the scene of concerts during the event called "Umbria Jazz". In the centre, there is the spectacular Fontana Maggiore, symbol of the city of Perugia: it is one of the most beautiful Italian fountains. Designed in Gothic style in the thirteenth century by Nicola and Giovanni Pisano, it is made of pink and white Assisi stone and surmounted by a bronze basin. The fountain is decorated in 50 bas-reliefs and 24 statues with which Nicola Pisano and his son Giovanni adorned the two concentric polygonal basins. In the lower basin are represented the months of the year with the signs of the zodiac and scenes of agricultural tradition and feudal culture, the liberal arts and characters of the Bible and history of Rome.

The Gothic Palazzo dei Priori was the public palace of the city, seat in the past and still today in part, of the Town Hall of Perugia. It is one of the best examples of medieval buildings of this type in Italy. The spectacular exterior is worth the interior, the Sala dei Notari, with arches and coffered ceiling, is richly frescoed, while the Council Hall boasts a fresco by Pinturicchio. The oldest part is the one that houses the Sala dei Notari, that is the corner part between the square and Corso Vannucci consisting of three three-light windows with trilobed portal on the square side and ten windows on the Corso side. It was the first construction site, built between 1293 and 1297 by Jacopo di Servadio and Giovannello di Benvenuto. Inside the building you can admire: Sala dei Notari, before 1582 called "Sala del Popolo" (People's Hall), is a large rectangular room made up of a sequence of eight transversal round arches holding wooden coffered roofs. The walls are covered with beautiful frescoes of the last decade of the thirteenth century that tell Legends, Biblical Stories and Maxims and depict coats of arms and captains of the people who succeeded each other in the government of the city. They are probably the work of the Master of Farneto and the Expressionist Master of Santa Chiara. The wooden stalls and seats are sixteenth-century; Hall of the City Council, located on the first floor is located where above the door is placed a fresco by Pinturicchio depicting the Madonna between two Angels. It preserves the original statues of 1272 of the Griffin and the Lion, which were outside the portal of the Hall of Notaries supported by corbels; Cappella dei priori, is located on the third floor, which was frescoed between 1454 and 1480 by Benedetto Bonfigli with Stories from the life of St. Louis of Toulouse and St. Herculaneum; National Gallery of Umbria, is located on the third floor of the building houses the largest collection of works of Umbrian art and some of the most significant works of art of central Italy, from the thirteenth to the nineteenth century exhibited in dozens of rooms with the works of Duccio di Boninsegna, Benedetto Bonfigli, Bartolomeo Caporali, Gentile da Fabriano, Beato Angelico, Benozzo Gozzoli, Piero della Francesca, Pinturicchio, Perugino, Orazio Gentileschi, Pietro da Cortona, Gian Lorenzo Bernini and others. Room of the Collegio del Cambio, frescoed from 1498 to 1500 by Perugino, with the help of his pupil Raffaello and furnished with a large wooden counter (Domenico del Tasso, 1492-1493) and seats along the walls (Antonio da Mercatello, 1508). The decoration is completed by a terracotta statue with an uncertain attribution (perhaps by Benedetto da Maiano) representing Justice. Room of the College of Merchandise, located in the second fondaco to the right of the main portal, is entirely covered by a late-Gothic wooden decoration. 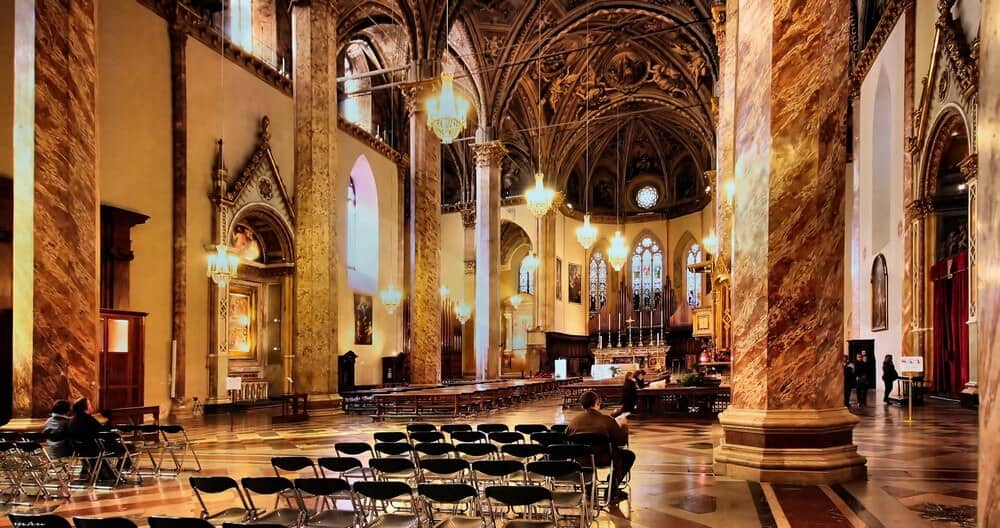 On the opposite side of Piazza IV Novembre is the Cathedral of San Lorenzo, the Duomo of the city of Perugia. Designed at the beginning of the fourteenth century by Fra Bevignate, the Cathedral was never completed this explains the particular aspect of the facade and side walls, which still reveal load-bearing hooks designed to fix a subsequent marble cladding, never added. A cathedral... "naked", in a sense. Curiously, the facade is not on the side of Piazza IV Novembre, on which runs the side wall, but on the nearby Piazza Danti. The portal is baroque, and in the cloister you can visit the beautiful Capitular Museum. 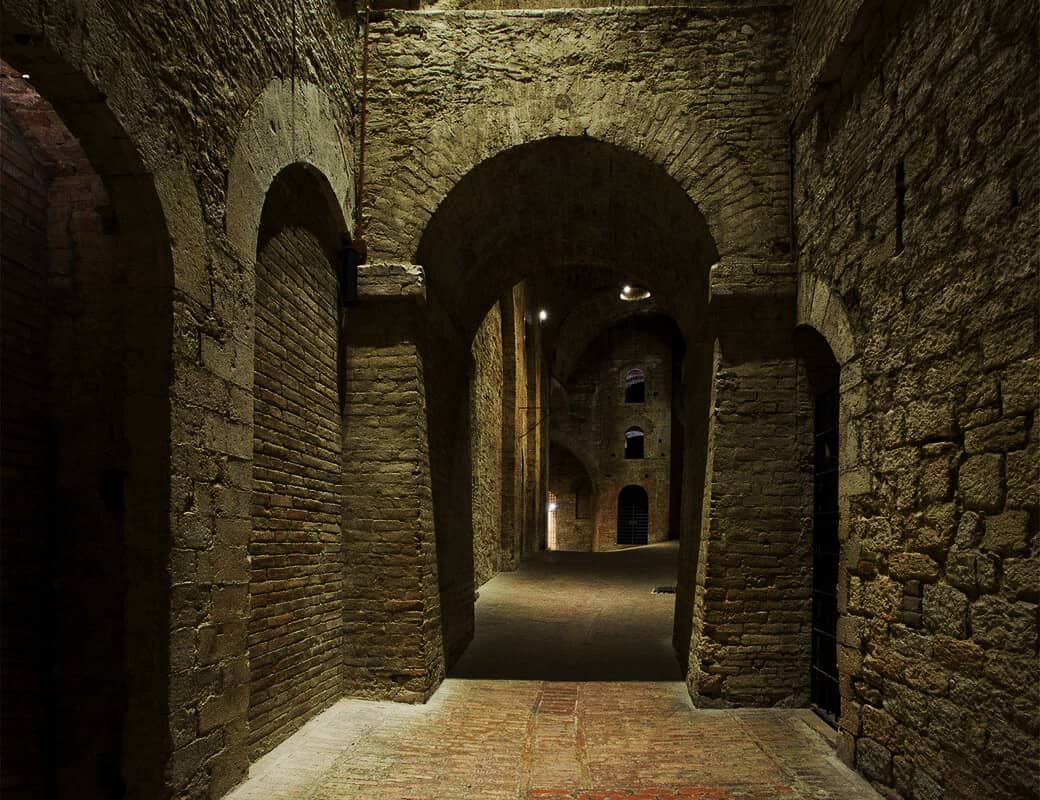 If the heart of Perugia is Piazza IV Novembre, its bowels are the fascinating underground of the Rocca Paolina. It is accessed from several entrances (Piazza Italia, Via Masi, Viale Indipendenza, Porta Marzia). The Rocca Paolina is a fortress wanted by Pope Paul III at the end of the "salt" war, built to a design by Antonio da Sangallo the Young (1540 - 1543). The fortress, elevated on five levels, was composed of a main body and an outpost, connected by a corridor. The first was built on the Landone hill, the second - called the tong - served as an advanced garrison. As an emblem of the papal dominion over the city, it was partly demolished in 1848 and after the restoration of 1860, wanted by Pope Pius IX, the part that occupied the current Piazza Italia was definitively demolished. Of the ancient structure only the basements of the papal palace remain, a place of extraordinary charm, still partly buried, crossed by escalators and used as an exhibition site.

Located in Piazza G. Bruno and Via del Castellano, the imposing square structure of the Basilica of San Domenico and its bell tower is difficult not to notice, and dominates the profile of Perugia even from afar. With a Gothic layout, the large church was built in two phases, from 1300 to 1458 and then underwent numerous restorations, and part of its furnishings has been plundered throughout history. It consists mainly of works that date back to the seventeenth and eighteenth centuries, but also remain frescoes of the fourteenth to fifteenth century. in the area of the transept and the chapel of St. Catherine. The funerary monument of Pope Benedict XI (14th century), the grandiose stained glass window m. 23 high of 1411 by Bartholomew of Peter and Mariotto of Nardo, the dossal of Agostino di Duccio (1459), the choir of the 16th century and the 17th century organ are all valuable. Particularly attractive are the bell tower, originally a spire, and the vast attics, where there are traces of the original Gothic church.

5 - Historical Museum of Perugina and House of Chocolate

A bit of sweetness never hurts, and in Perugia it's quite easy to get it... Of course, visiting the Historical Museum of the city's most famous factory, the Perugina at the Nestlé Italiana S.p.A. factory. The museum, located in San Sisto, a few kilometers from Perugia, traces over a century of history of the famous chocolate, including period photographs, equipment and detailed explanations on the various stages of processing cocoa. The experience can be completed with a visit to the factory, or with a workshop at the Chocolate School. And, yes! there are the tastings.

It is accessed from the central Piazza Danti, a masterpiece of ancient hydraulic engineering. It is about 36 meters deep and is fed by at least three veins of water. It was the main water reservoir of the city in Etruscan and Roman times. The first 5.30 m of the cylindrical barrel are clad in large blocks of travertine, in the top part of which is a double truss that supported the roof in travertine slabs. In the cavity of the well you can admire the wooden beams used as a roof and proceeding down a tunnel, created at a later age once used as a cellar, you enter directly into the heart of the building through a wet and slippery footbridge through which you can admire its imposing majesty. The walls are large squared original blocks on which are highlighted the signs of the ropes used for water withdrawal, in the initial section of the barrel the wall is covered with travertine ashlars that are now covered with lime scale and mold due to the presence of moisture. Furthermore, on the blocks of the facing, alphabetical signs can be read, which can be traced back to those of the city walls. On the walls of the travertine cladding there is an opening, probably the feeding mouth of the well, which from here received water from the underground aquifers. The homogeneity of material and construction technique between the well, the tank of Via Caporali and the walls allows us to assume that the well was built as a public infrastructure and presumably placed along the main road.

3 - Hypogeum of the Volumes and Necropolis of the Palazzone

It is located in Ponte San Giovanni 5 km from the center of Perugia, which is what is perhaps the most fascinating of the Etruscan memories of the Umbrian city. The Hypogeum of the Volumni is an underground tomb dating back to the second half of the second century BC. It is accessed through a steep staircase that descends underground, and is divided into several rooms where inscriptions were found and various urns decorated in travertine marble. The Hypogeum is part of the archaeological area of the wider Palazzone necropolis, consisting of almost 200 tombs. A steep and grandiose dromos (corridor) of access leads to the sepulchral chamber of Arunte and Lars Volumnio; the tomb is divided according to the layout of the Roman-Italian house, with the rooms around the central atrium.

The Torta al Testo has very ancient origins. It was born as an unleavened alternative to traditional bread. There were two variants: wheat, the most popular, and corn, used by wealthy families. The cooking surface, a disc about 3 cm thick, is called Testo from the Latin 'testum', or the brick tile on which, in ancient Rome, the focacce were cooked. Originally it was made at home by carving large refractory stones or shaping a mixture of clay and fine gravel, while today you can buy it in cast iron or cement. Today it is tasted natural or stuffed with ham, cooked sausage, boiled vegetables, cold cuts. Attention! Do not call it piadina like all "strangers".

1 - Observing the panorama of Perugia

From the views of the Carducci viewpoint, from the terrace of the Mercato Coperto and from Porta sole where you can admire the city walls, the various districts and bell towers and the Umbrian valleys that extend throughout the horizon.