10 places to visit in Rome in a long week-end

Rome is eternal, amazing, and always surprising. Here 10 places not to be missed around the city. 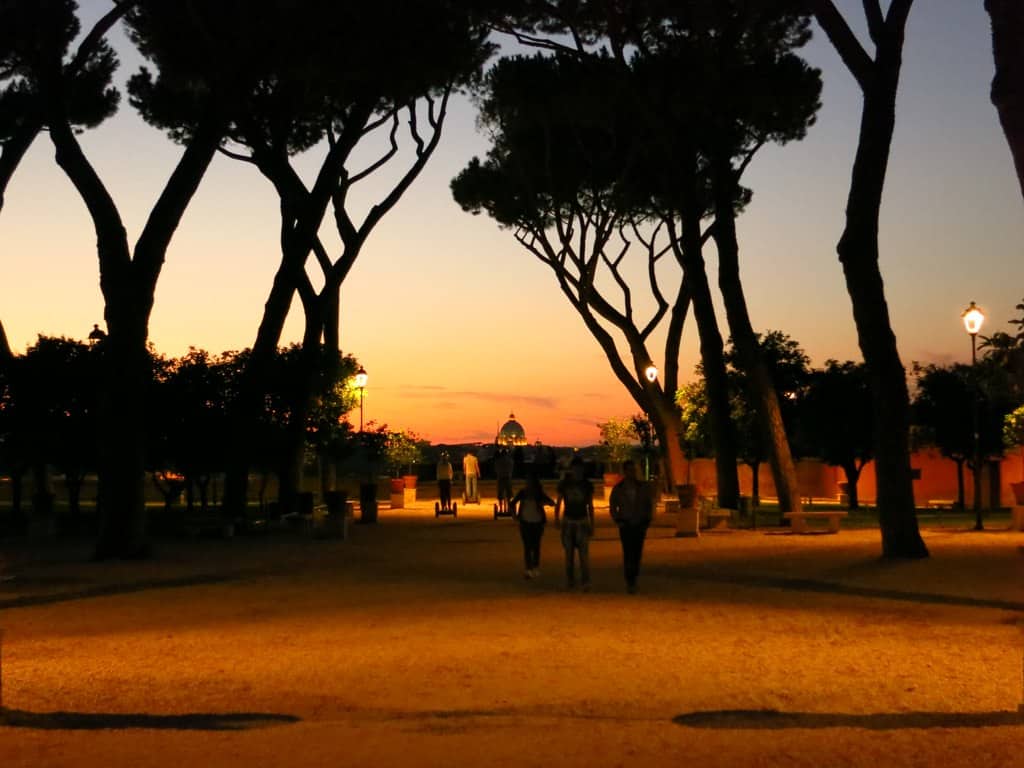 The Savello Park, better known as the Orange Garden, is located on the top of Avantino Hill ( Ripa neighborhood). The trees that give it its name are in memory of San Domenico, who founded his convent here. The park was built in 1932 to a design by the architect Raffaele De Vico, who enhanced the space within the ancient walls. On the opposite side of the fence and of the apse of Santa Sabina, the traces of the old towers and the drawbridge are still visible. From Belvedere you can enjoy a splendid view of Rome that goes from the bend of the River Tiber to Saint Peter Basilica

The lock of the door

It is a fake lock because it has no key, it is only a piece of art. The area was renovated and re-decorated by Giovanni Battista Piranesi under the order of the Cardinal Rezzonico. Located via della Lungara, Villa della Farnesina or Chigi, is a symbol of the Renaissance and Raffael’s art. It was the private residence of banker Agostino Chigi between 1505 and 1520, called Palazzo del Giardino, where he created a paradise with officinal and exotic plants and classical statues.
The villa is known for the frescos inside painted by Raffael and others: there is the Galatea’s Loggia (or Winter’s Loggia) with the frescos of Galatea and Polyphemus and the Chigi’s Horoscope; the Amore e Psyche's Loggia (painted by Raffael and his friends) tells the episodes of Apuleio’s fable. 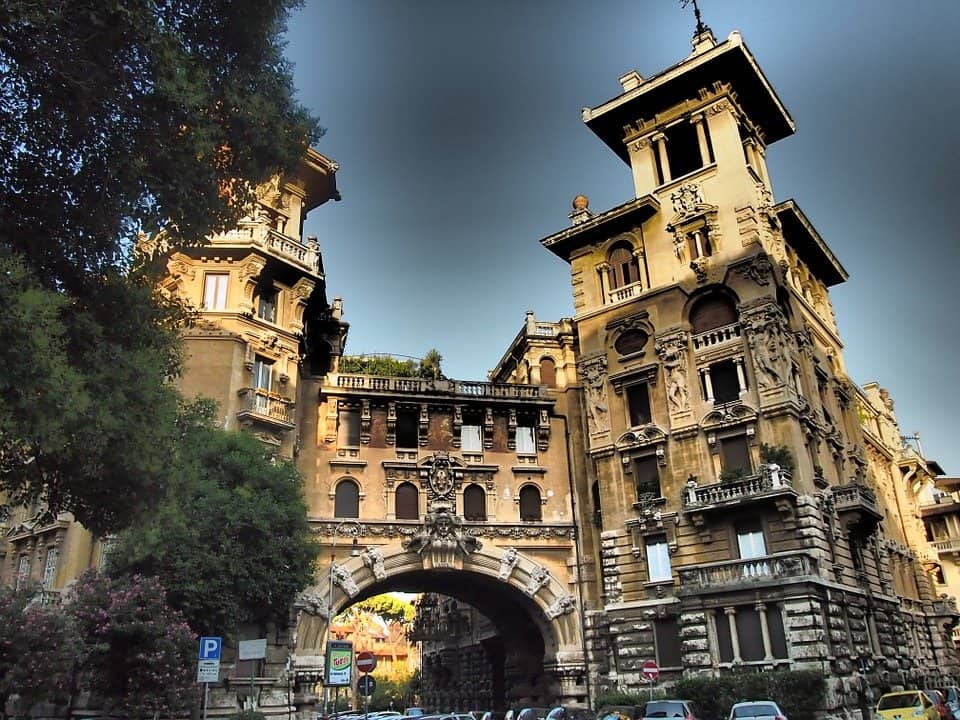 This district was planned from 1915 to 1927 by Gino Coppedè, in Art deco and Liberty style with Greek, Gothic, Baroque, and even Medieval influences. A complex located between the two streets, Via Salaria and Via Nomentana, consisting of 26 small palaces and 17 "villini" or detached houses.

The entrance of the district is marked by an adorned arch with joins the two ambassadors’ palaces, with a large wrought iron lamp. Square Mincio and the Frogs Fountain are the center point of the district: all around the Spider and the Fairies Building (this one was built combining any number of materials like marble, brick, travertine, terracotta, glass). 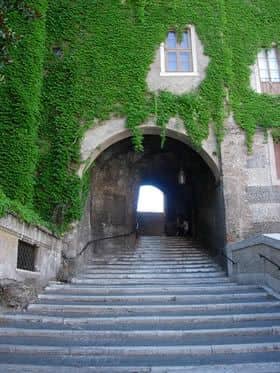 The staircase is in the Esquilino hill district, a very peaceful area. The name derives from the palaces where the Borgias lived; the façade, covered by a blanket ivy, would date back to the 13th century and it has both medieval and renaissance architectural details. The balcony should be designed by Raphael. According to popular history, that was the balcony of Giovanna Cattanei, the secret lover of Pope Alessandro VI Borgia.

Coming up the alley and crossing the arch, you arrive at the Church of Saint Peter in Vincoli that houses the Michelangelo Buonarroti’s Moses. 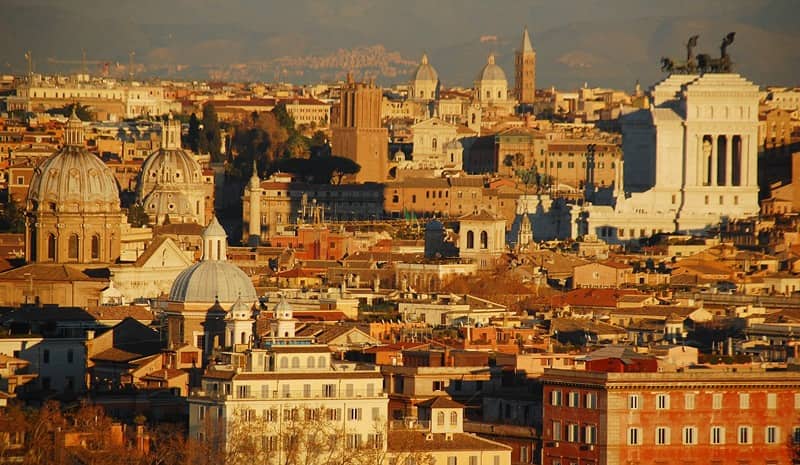 The Gianicolo is a roman Hill but it is not mentioned in the famous seven hills. It is located on the top of Trastevere district. In 1849 here, Giuseppe Garibaldi fought against the French Army for the defense of the Roman Republic.

Today it is a public park and celebrates the Risorgimento; from its Belvedere, it is possible to see the Pantheon, the Synagogue, the Vittorio Emanuele II Monument, domes, and Villa Borghese. In the Gianicolo there is the Fountain of Acqua Paola, the Church of Saint Peter in Montorio (in the first cloister of the friary it is possible to admire the Tempietto del Bramante), and the statue dedicated to Garibaldi. 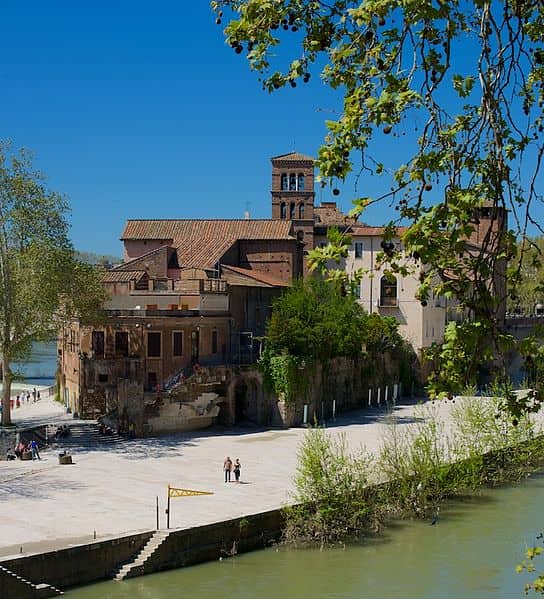 It is an urban island that measures 300 meters and it’s wide 90 meters. According to the first legend, the island was born in 509 when the last roman king, Tarquinius Superbus was dethroned by the population who threw his wheat and grain into the Tiber. The accumulation of mud around it is said to have gradually led to the forming of the island.

Another story tells that in 291, there was a terrible plague in Rome and a group of priests went to Epidauro, a small city in ancient Greece and site of a sanctuary to Aesculapius, to find a solution. They returned with the serpent, the dear animal for the god, and erected a temple on the Tiber Island in his honor. They changed the shape of the island as a ship with travertine. Today the Aesculapius temple lies under the Church of San Bartolomeo but is still visible the serpent rolled up a cane, the symbol for medicine all around the world. On Piccolomini street (Aurelio district) it happens something magic: the nearer you get, the further away the Saint Peter's dome seems to go. If you move back, the dome, on the other hand, appears to get larger and nearer. It is a magical illusion, a fascinating perspective fooling the eye. This mystery could be tested both on foot or by a means of transport. The Imperial Fora are a unique monumental architectural structure of buildings and squares that were the city’s administrative and monumental center and the hub of public life during the Republican Age. The modern name defines the area from Capitol Hill (Campidoglio) to the foot of the Quirinale Hill, once made up of Caesar’s Forum was followed by Augustus’, then the Transitional (built by Emperor Domitian and inaugurated by Emperor Nerva) and, finally, Trajan’s Forum, which is undoubtedly the grandest. Since 2015, the Imperial Fora have new lighting, so that it is possible to admire their beauty at night with the Colosseum in the background.

The Palace of the Italian Civilization

The palace located in the EUR district is simply known as the Square Colosseum. It is considered the architectural icon of the 20th century and it uses the tight sequence of arches repeated 216 times in the four equal façades.

The building was conceived and planned in view of the 1942 Universal Exposition in Roma, but the works were interrupted as well as the event due to the Second World War and completed in the post-war period. Under the arches, there are 28 marble statues that represent art and human activities that celebrate the Italic genius. On the top, there is the famous inscription “A nation of poets, of artists, of heroes, of saints, of thinkers, of scientists, of navigators, of migrants". Today, the building houses the headquarters of the Maison Fendi.