World Day for Grandparents and the Elderly in Italy: our Roots and History

The World Day for Grandparents and Elderly, starting from this year, will be the occasion to celebrate the importance of these fundamental and loved people in our lives.

The youngest generation is the arrow, the oldest is the bow

The Pope underlines the importance of grandparents and elderly people

For the first time, starting this year, the World Day for Grandparents and the Elderly will be held every fourth Sunday of July. It was scheduled by Pope Francis during the Angelus on 31st  January 2021. The Pope wanted to emphasize the fundamental role of grandparents and elderly people in society and within the family. This is the reason why they will be celebrated right around the time of the liturgical feast of Saint Joachim and Saint Anne, Jesus's grandparents, on 26th July.

This year, the fourth Sunday in July will fall on 25 July to remember our grandparents and the elderly in general, those who have handed down life to us and who pass on values, traditions and bear witness to the pieces of an often forgotten past. Wars, hunger, very complex and hard historical periods have characterized their lives of hard work and hardships, sacrifices that have allowed us later generations to lead a more comfortable, easy, and privileged life.

In Italy, a Grandparents' Day - 2nd October- already exists but, of course, does not coincide with the anniversary in other places of the world, and so Bergoglio wanted to unify this event- full of love and respect- into a single day worldwide.

Grandparents and Elderly in our society 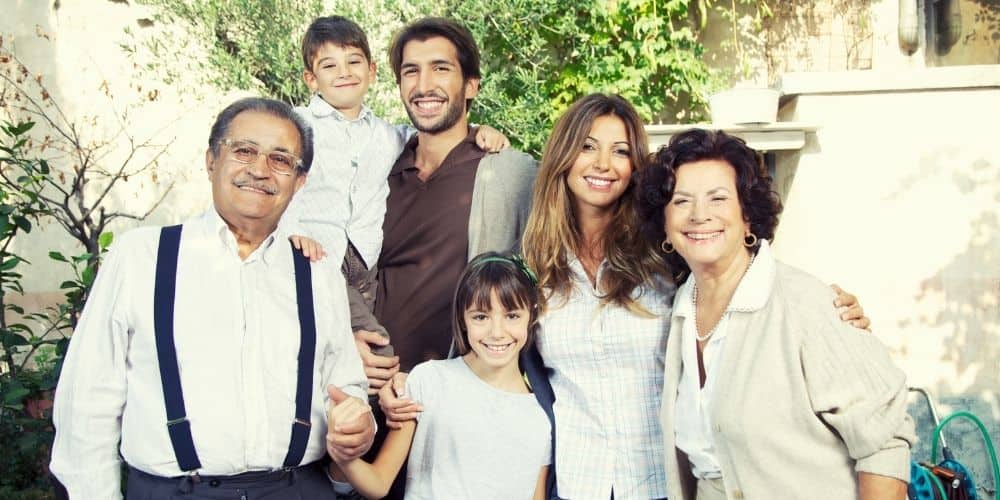 Throughout history,  elderly people have always been synonymous with wisdom, the guardian of knowledge, the pillar of the family unit on which society itself is founded. This is especially true in the Mediterranean basin, particularly in Italy where the bond with grandparents is very deep and heartfelt. Without going back too far in time, it is enough to look at the 20th century and, in particular, at the structure of peasant families where everyone lived together. The old man, as head of the family, gave the directives and guidelines for the daily ménage. In fact, if we dwell on the Italian term "nonno" (namely, grandfather) from the Latin "nonnus" means monk, in a broader sense elder which, in turn, from "anteanus" or"antianus" means older, older than the others but also with greater dignity and authority. However, beyond all these premises, the importance of grandparents and elderly people in the lives of each of us as grandchildren or as individuals in society is undeniable. Our roots, the reason for what we are thanks to them, our memory, and above all an unconditional and boundless affection. Grandparents, in Italy, are generally pampered like children within a family, the hearth of the family and the "glue" that holds us together as long as they are alive. The grandparent's house, especially on Sundays and public holidays, becomes a meeting place for children, sons-in-law, daughters-in-law, grandchildren, and great-grandchildren to renew the ancient tradition of sharing an Italian ritual: food.

The grandmother is the undisputed symbol and bearer of secrets in the kitchen, of homemade specialties for all of us, and of boundless love for children and grandchildren. The Italian grandmother is inevitably associated with the snack par excellence and the typical question that like a refrain asks us: "Are you hungry? Have you eaten?" In our country, grandparents are synonymous with shelter, courage, shelter, hugs, fairy tales, anecdotes, and proverbs: a wealth and an inestimable heritage to be preserved. They are a sense of belonging, traditions and reflect our identity, our origins, as well as our model to follow.

Elderly people to be protected and not abandoned: all-round benefits for us

The World Day for Grandparents and the Elderly, considered authentic links between generations, was created as a warning not to forget and not to marginalize an elderly person just because he or she is old. "Old age is a gift, I hereby establish a day dedicated to grandparents" are the Pope's exact words, inviting us to listen to "their precious voice". The frailty of the elderly should therefore not be understood as a weakness or a defect, especially since it is a cycle of life towards which we all come sooner or later, but as an example to be followed and a human and spiritual wealth that is handed down from generation to generation. The phase of old age, which is part of existence itself, cannot be avoided, pushed away, or shunned but must be welcomed with the same love with which they treat a grandchild. Especially nowadays, grandparents have become a safe haven and financial support for many families in difficulty, factotums, companions at school or at various activities, company when the children are sick, always ready to solve problems of every nature and kind. Who among us has never run into his/her grandfather/grandmother's arms to escape a parental rebuke or for the first little sorrows as a child? The Holy Father also recommended us not to leave alone the elderly who were the first to sacrifice themselves. During the pandemic, they paid the highest price of living in isolation and far from their loved families. The reciprocal presence of grandparents and grandchildren is essential. The youngest fill their lives with joy and the elderly represent protection. Grandparents' affection is genuine and disinterested, which favours and facilitates the emotional and psychological development of the child. Scientific studies have shown that living with one's grandparents is of prime importance because those who grow up in contact with them, in a reassuring environment, and surrounded by love, will become adults capable of loving, self-confident and able to face stress.

Grandparents in literature and TV in Italy

Moreover, as proof of this, literature also boasts works in which the role of grandparents clearly emerges. In Grazia Deledda's L'incendio nell'oliveto (a book published in1918), the elderly grandma Agostina, described with great skill by the Sardinian author, is attached to her family and grandchildren and tries at all costs and with all her might to keep her family and good name together. A deep soul with a great personality: she is the true protagonist. One of Deledda's greatest masterpieces telling us about matriarchal society and the link to family and society of that time.

There are also two symbols considered to be the Italian grandparents par excellence, the late Gino Bramieri and the much-loved Lino Banfi in their respective characters of Nonno Felice (Granpa Felice) and Nonno Libero (Granpa Libero)

Nonno Felice, star of the 1990s sitcom of the same name, is the patriarch and head of the Milanese Malinverni family, who is entrusted with the task of bringing up his three grandchildren Federico and the twins Eva and Morena. The absence of their parents, often out for work reasons,  does not leave Gino Bramieri the choice to take care of the little ones among a thousand vicissitudes.

On the other hand, the more modern series of "Il medico in Famiglia" (a doctor in the family, 1998-2016), instead, sees Lino Banfi in the role of grandpa Libero. The plot of this screenplay is almost similar, but it portrays a more complex and more modern family with more topical issues where grandfather Libero, a retired railwayman, is struggling with his son Lele, a widower, and his three children. Up to this point, the Martini family might seem like an ordinary and common family, but that's not all. Libero's other daughter, his mother-in-law Elvira (who will later become his wife) make running the family anything but easy. Here, too, Lino Banfi masterfully plays the role of a mediator, keeper of secrets, and dispenser of solutions capable of protecting everyone.

Lino Banfi's statement following his emotional, face-to-face experience with the Bishop of Rome is famous. "The establishment of a world day dedicated to grandparents has pleased me. I would like to reiterate my gratitude to Pope Francis, whom I met in December last year. He impressed me so much, we spoke little but on that occasion, we recognized that grandparents are important. He told me that he knew I was called the grandfather of Italy,'' the Apulian actor continued, ''Holiness, if I am the grandfather of Italy, then you are the abuelo del mundo (grandfather of the world in Spanish). He was very happy about this, he put his hand on my back, then I told him that we are the same age. As a matter of fact, I am five months older than him. He told me that I wore my years well. It was about time that a Pope took such close care of the elderly. Grandparents have been defined as the link between generations".