Visit Italy on Valentine's Day: The feast of lovers made in Italy

The origins of Valentine's Day: from profane love to courtly love

The origins of the Valentine's Day are to be found in the famous Roman Lupercali. The Lupercali were the celebrations of Luperco, god of fertility, and they took place publicly around mid-February with rituals that explicitly praised sexuality, recalling its tribal and ancestral spirit: from these choral events the Carnival party would also derive. Obviously this ritual typology did not adapt at all to the less profane spirit of the incipient Christianity: it was therefore Pope Gelasius I in 496 AD. to "Christianize pagan recurrence" by instituting the Valentine's Day, the promoter of a more idealized and certainly less carnal love vision. San Valentino, bishop of Terni, patron of lovers and epileptics, was martyred in 273 AD. Various anecdotes refer to his figure that identify him as a defender and advocate of courtly love. In one of these it is said that, during his imprisonment, Valentino fell in love with the blind daughter of one of his jailers. Later, thanks to the intercession of the future saint, the girl would regain her lost sight. Finally, it would seem that the bishop of Terni has sent his loved one some love cards with the inscription from your Valentine, giving way to the tradition of the "valentine" still so fashionable today. According to another legend, however, Saint.Valentine would have celebrated the union between a young Christian girl and a Roman soldier, after having recomposed a quarrel between the two lovers thanks to the gift of a rose: another symbol, still in use today , the romantic love celebrated by the party. Another tradition, however, tells of how the future saint would have given to a poor girl the sum of money necessary for her wedding, saving her from perdition and dishonor. How much legend and how much truth? The fact is that there are some historical testimonies that attest to the existence of the Valentine's Day already in remote times: such as the institution in Paris, on February 14, 1400, of the High Court of Love, an organ that decided on love disputes; or, in Shakespeare's Hamlet, written at the beginning of the seventeenth century, we read, through Ophelia's mouth, a clear testimony to the existence of the feast of Saint Valentine. But it is obviously in more recent times that the festival has seen its explosion, especially thanks to the marketing of valentines, love tickets, a phenomenon that has exploded since the nineteenth century in Anglo-Saxon countries and then spread throughout the planet. Today the Valentine's Day has become a fundamental date in the calendar of Western holidays, maintaining its dual soul of pagan and romantic celebration at the same time.

If you are a happily in love couple, or you are simply lovers of ethno-anthropological curiosities, we can show you some cities in Northern Italy where the Valentine's Day is celebrated in a rather particular way. For example, in Bussolengo, in the province of Verona, the ancient cattle festival that once took place on February 14 has turned into a sparkling procession of cars and agricultural machines. To frame the event a magnificent Luna Park accompanied by numerous food and wine stands. Singular, however, the tradition of Quero, in the province of Belluno. Here, after the holy mass, oranges are rolled from a slope located near the church dedicated to San Valentino. The aim of the faithful will be to grab the fruits, before it is too late ... In Quinto di Treviso, however, the Valentine's Day lasts for a whole week, with the organization of games for children and a picturesque parade of masked wagons. And finally in Zoppola, in the province of Pordenone, all lovers are given an "apotropaic candle" to light during bad weather days to ward off lightning and storms...

Valentine's Day in Central Italy: between Terni and Palmoli

One of the places where you can fully experience the atmosphere of San Valentino is definitely the city of Terni, in Umbria, home of the holy martyr. Here every year the Valentinian events take place, an event that includes the organization of exhibitions, tastings, shows and guided tours in honor of the patron. And not only. Particularly important is the event that takes place on the Sunday preceding February 14: more than a hundred couples, in fact, from all over Italy, come to the Umbrian town to exchange a promise of eternal love in the presence of the sacred relics of the saint . An unmissable event for all lovers of Italy. What are you waiting for, Saint Valentine is ready to give you his loving blessing! Before returning home, or continuing your Valentinian tour elsewhere, we recommend you stop in Abruzzo, in the small town of Palmoli, in the province of Chieti. Here the feast of lovers is celebrated in a rather singular way, sprinkling the floor of the church of Santa Maria delle Grazie with leaves: what better carpet for a future wedding?

Valentine's Day in the South: on the streets of Vico del Gargano 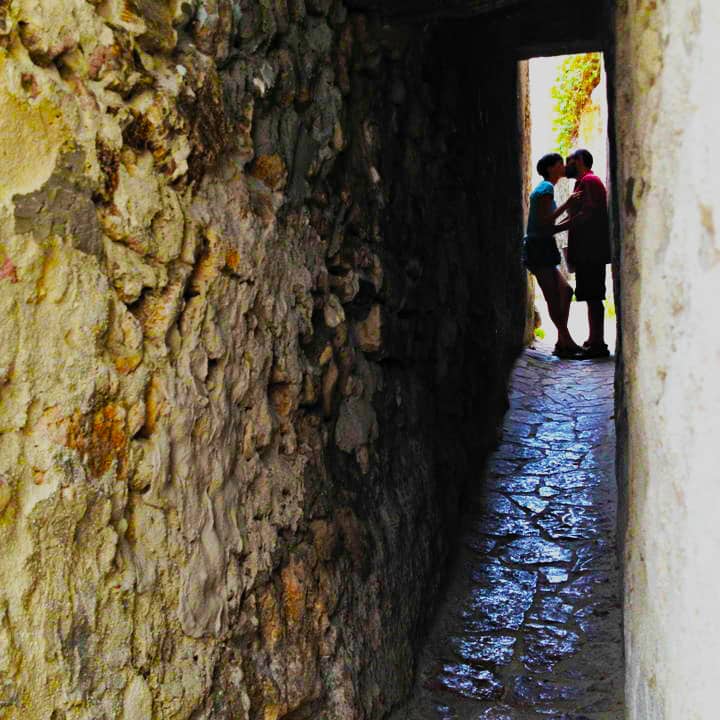 Your tour of the boot, in search of the most characteristic Valentinian traditions, has Vico del Gargano, in the province of Foggia, as its last stop. Here, in the warm and welcoming Apulian town, in fact, the feast of February 14th is particularly heartfelt, also because the inhabitants of Vico have elected Saint Valentine their patron saint since the seventeenth century, to replace the now obsolete San Norberto. The citizens of Vico decorate the streets of the city with oranges and laurel, to make easier the parade of the statue of the patron saint, also worthily garlanded. To the young couples who arrived there for the occasion, we suggest drinking "the juice of the blessed oranges", a portentous elixir of love, and exchanging effusions in the "vicolo del bacio" to seal their union forever, with the approval of Saint Valentine made in Puglia.