Traditions of Holy week in Sicily: the Misteri Procession of Trapani

Every Good Friday in Trapani a centuries-old tradition representing the Passion and death of Christ is repeated: the twenty-four hours Procession of the Mysteries (Misteri).

The Procession of the Mysteries (Misteri) of Trapani still arouses great emotion and excitement in town. The Mysteries are eighteen sculptural groups and two simulacra made between the 17th and 18th centuries. All statues are placed upon a wooden structure (vara) and statues are generally made of silver with golden and coral decorations. The procession has Spanish origins: at first, it was managed by a religious confraternity, then each group was entrusted to a Maestranza (arts and crafts) which together in 1974 founded the Unione Maestranze. Today, thanks to their collaboration, every Good Friday the city of Trapani stops and stages that this tradition that attracts tourists from all over the world. Each group of statues depicts a moment of Christ's Passion, i.e. from the separation with Mary to his death on the cross. It is a never-ending parade that winds through the elegant and refined streets of the city center, starting on Good Friday at 2 pm from the Chiesa del Purgatorio and then going on all night, without any break or hesitation, until Saturday at 2 pm, in the very same place where it began. Each group, run by a different maestranza, is accompanied by the procession of the faithful, young people, and devotees dressed in the clothes of Christ's time to reproduce that historical context; they also all have a marching band playing funeral marches written by Sicilian authors. After 00.00 the part of the human procession dissolves and only the statues remain, dressed, enriched by the jewels lent as a vow, lit by candles and surrounded by splendid floral decorations and the massari, those who carry the Mysteries on their shoulders with the so-called annacata movement, especially during the musical moments.

After a night spent in the oldest parts of the city (in the area of the Barracche the Mysteries meet the dawn and the sound of the waves of the sea joins with the notes of the funeral marches) around 8.00 a.m. on Holy Saturday the Mysteries, begin their return "home". The last group usually enters the church at 2.00 p.m., the bishop of the city blesses everyone, the workers, the devouts, the musicians, the people, and the doors close with great emotion, saying goodbye to the Mysteries until the following year. 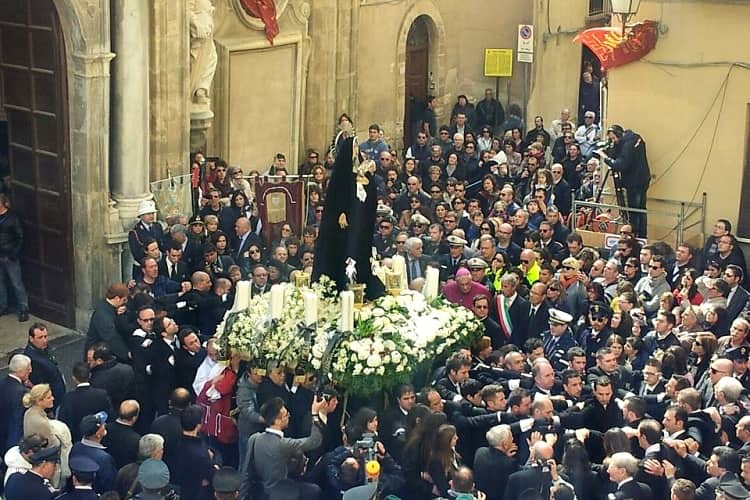 Here the holy groups and their Maestranze: