The Calcio Storico Fiorentino is an ancient sport, deeply rooted in the Florentine tradition. The matches are played in the wonderful Piazza di Santa Croce, where every June the four districts of Florence fight for glory dressed up with traditional medieval costumes, creating an intense and colourful show, a mixture of rugby, soccer and Greco-Roman wrestling.

Too small to be a war, too cruel to be a game. 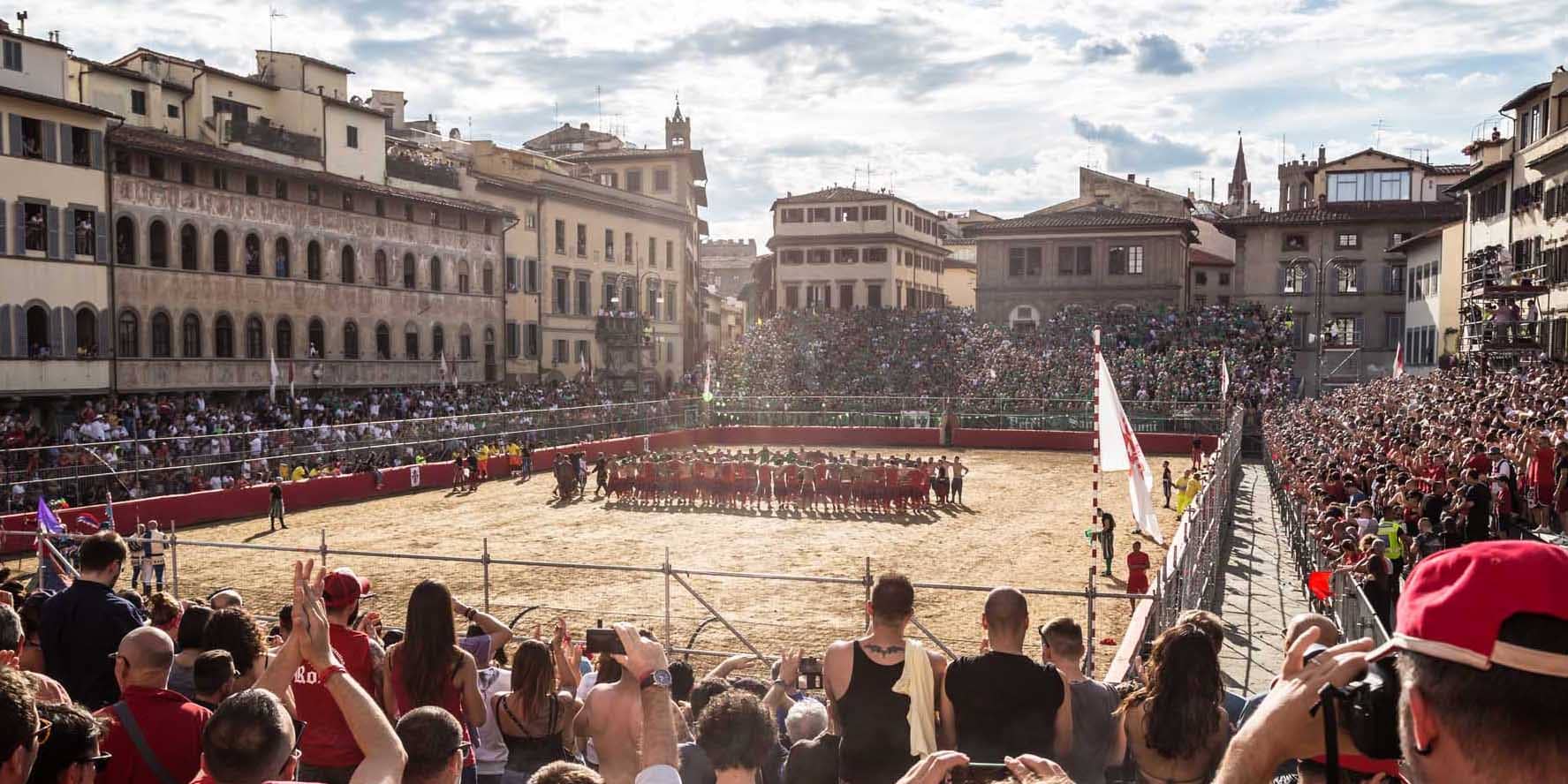 June 24th is a special day in Florence.

Florentines fill the streets celebrating St. John the Baptist (the patron saint of the city) and look forward to the two major events of the day: the final match of the Calcio Storico and the "fochi" of San Giovanni, the wonderful fireworks display lighting up the city skyline.

Attending the Calcio Storico event is a dive into Florence's medieval past: very little has changed on the pitch between the present day’s matches and the ones played at the time of the Medici family (who were great fans of the game and often played it themselves). The matches are intense, at times violent, and the audience roars at every goal.

If you are in Florence at the end of June, we definitely recommend attending the Calcio Storico final. An afternoon at the game is guaranteed fun, mingling with the passionate local fans, watching acrobatic flag-throwers in medieval costumes and enjoying the intense action of this ancient sport, halfway between wrestling, football and rugby.

The Final and the Traditional Parade 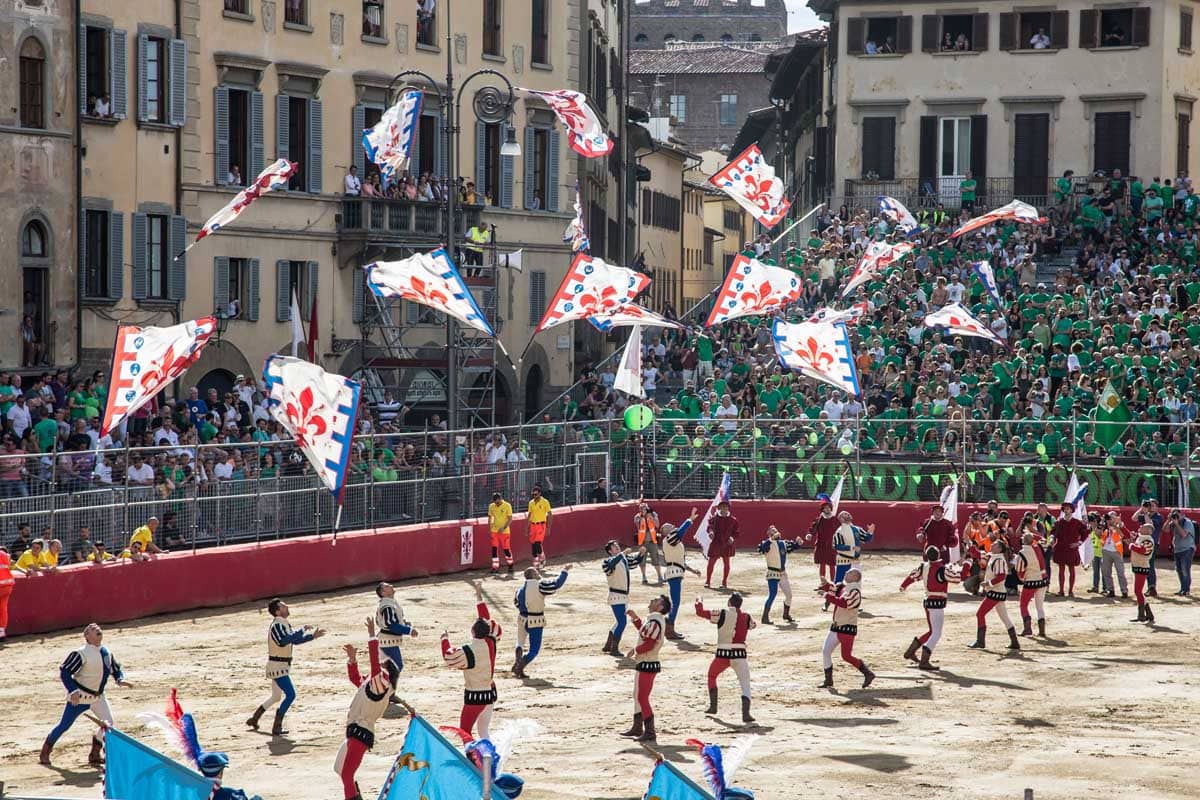 Calcio Storico (literally “historical football”) is played by teams representing Florence’s four historical districts, each one identified by a colour and represented by the local athletes, called "calcianti" (‘’kickers’’):

The two semifinals and the final match are played in a special arena built in Piazza di Santa Croce, right in front of the gothic Basilica and the famous statue of Dante Alighieri: a special location indeed.

There is a fierce rivalry between teams and fans, but the general atmosphere is still joyful and safe for tourists and locals alike.

Before the match, a wonderful medieval parade crosses the city centre, with hundreds of participants dressed in sixteenth-century costumes, with heralds, pageboys, crossbowmen and trumpeters.

The parade takes the move from Santa Maria Novella and reaches Piazza di Santa Croce a few minutes before the game kick-off, warming up the atmosphere in the arena with its acrobatic flag-throwers. 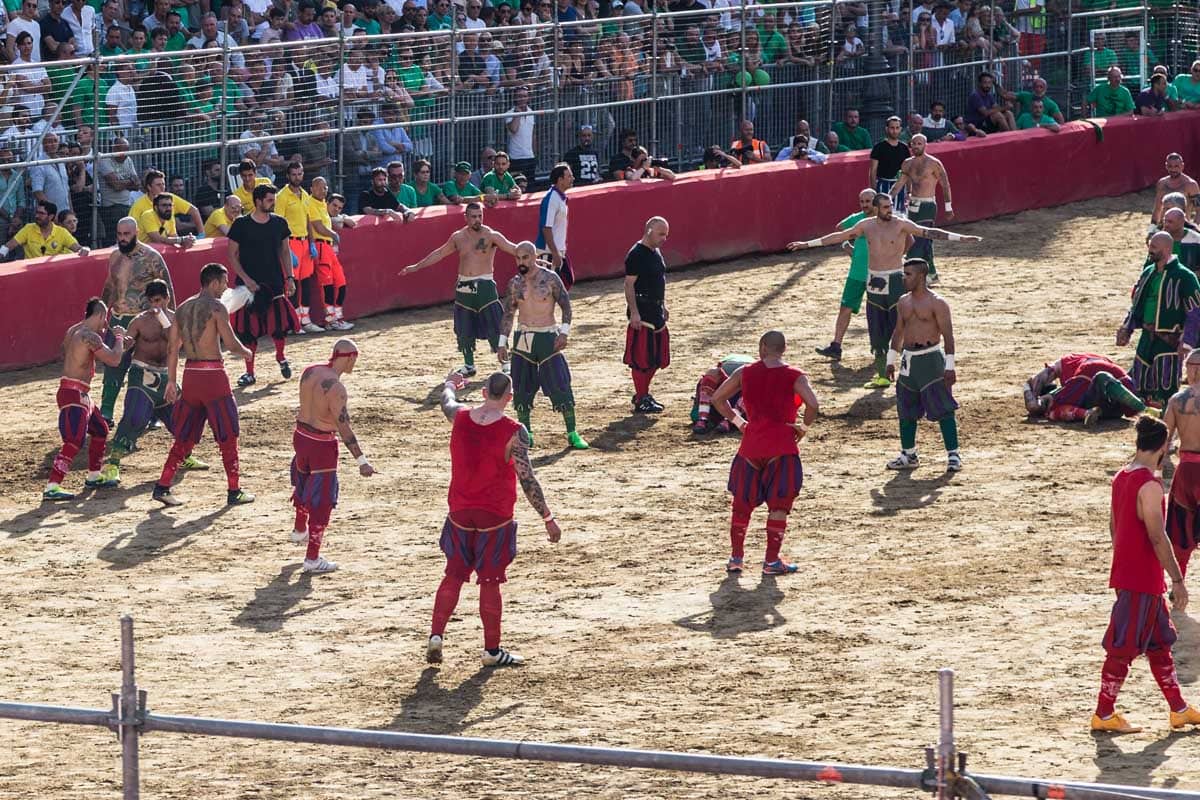 The whole Calcio Storico tradition has its roots in the Middle Ages, where it was known as '’football in costume”: it was the most loved sport by young Florentines and it is said to derive from an ancient ball game played by Roman legionaries, called Harpastum.

The golden age of Calcio Storico was between the fifteenth and eighteenth centuries. It became popular again from 1930, when the city organised a tournament celebrating the 400th anniversary of the siege of Florence: from 1930 onwards it has been played every year, attracting more and more crowds of local fans and tourists.

One of the most memorable matches was played in February 1530, when Florence was besieged by the troops of Emperor Charles V of Habsburg. The stubborn Florentine noblemen, although exhausted by hunger, went on and played their Calcio Storico match anyway to make fun of the besieging forces.

The rules of the Calcio Storico

Calcio Storico matches are played on a rectangular sandpit arena (100 x 50 metres), with two long nets on the short side, and last 50 minutes in total.

- Players can use both hands and feet to throw the ball into the opponent’s net, scoring a goal (called caccia, or “hunt”). For every missed shot, half a goal is assigned to the opponent’s team.

- Almost every type of martial art is allowed to pin the opponent to the ground and gain territory: punching, choking and headbutting are all part of what you’ll see on the pitch.

- No substitutions or breaks are allowed.

In the past, the winner of the tournament was awarded a whole Chianina cow, while nowadays the winning team has the honour to see its flag hung out all year long in front of the Palagio di Parte Guelfa, the head-quarter of the Calcio Storico federation. 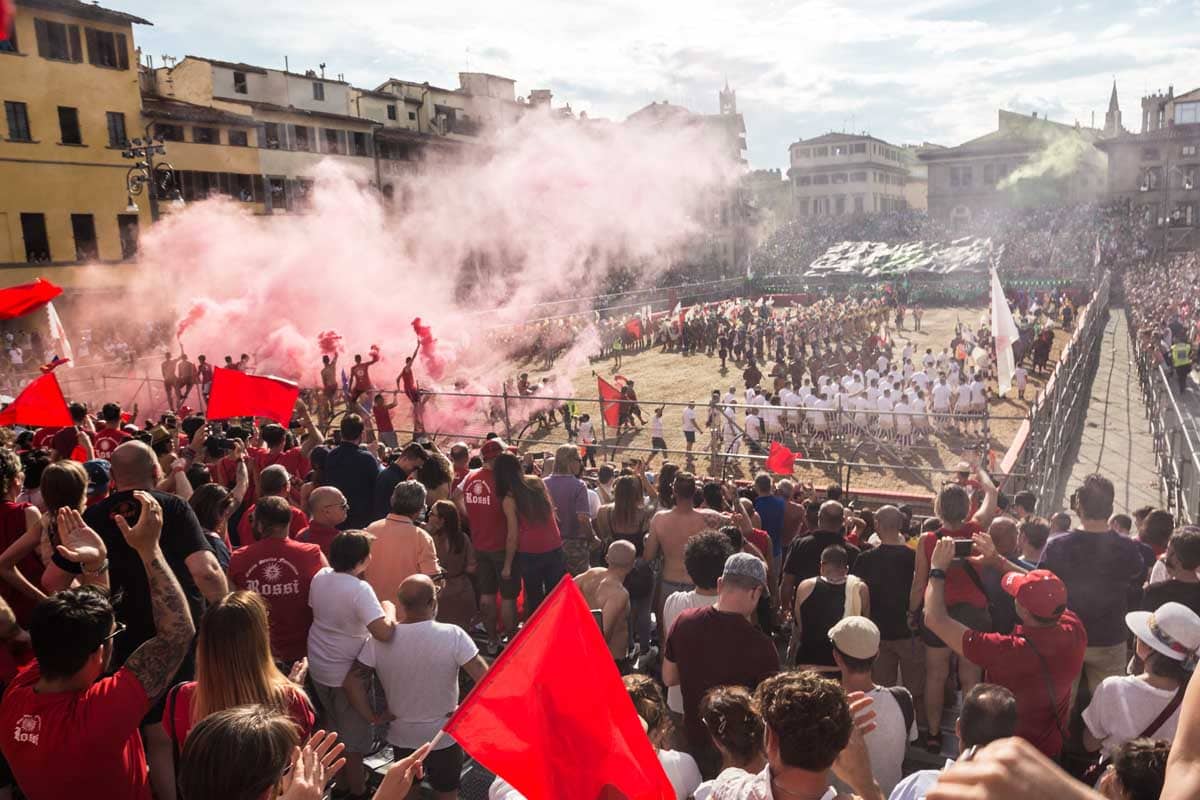 Here you are our 4 practical tips about how to enjoy this exciting show!

1. It is best to arrive at the final match at least an hour before the start: this will allow you to get good seats, enjoy the show put on by the colourful medieval parade and watch the introduction of the teams.

2. The tickets can only be bought from the official box office and the price is around 40-50€ per person (prices and online availability could change though). The tickets for the final match are usually sold out in a few days so it’s best to book them in advance.

3. Water, hat and sunscreen are very useful, especially during sunny days, as there are no covered stands: fans are under the strong June sun throughout all the event.

4. A tip for neutral fans: it is best to understand which team’s stand you have been assigned to and dress accordingly with the right colour, to avoid funny banters from the local "Tifosi".

The traditional fireworks of San Giovanni

To complete the experience, don’t miss the magnificent fireworks display dedicated to St John, a proper city tradition since the 13th century.

The fireworks are shot late in the evening of the 24th of June from the famous Piazzale Michelangelo (known as “Florence’s rooftop”) and last about 20 minutes.

The best spot to enjoy the fireworks depends, of course, on your personal taste:

- For a close-up experience, with your nose up towards the firing point, we recommend going to the busy area under the Tower of San Niccolò, one of the old city gates.

- For a better global view of the event, and to appreciate the amazing city skyline lit up by the fires, it’s best to find a standing spot in one of the bridges on the Arno river, especially the Santa Trinita bridge or the Carraia bridge.

Regardless of the location you chose, it is very important to be there at least a couple of hours before the start of the fireworks to be sure to get the spots with the best view.

Street-food lovers will find plenty of stalls selling traditional local food (panini with porchetta, or lampredotto) so finding a takeaway dinner won’t be a problem.