Street food, Italian style? Yes, please! From North to South, here is our list of the most popular snacks in Italy. No counting calories allowed.

Do you want to go pro with your Italian holiday? Then take note of our tips and get ready for an unforgettable taste trip. Italian cuisine is well known for being rich, varied and heterogeneous. Each region is linked to its own traditions, flavours and products that shape an appetising mosaic. As for Italians’ dining tables, finding a predominant characteristic seems a titanic undertaking, but quality ingredients and great mastery are the glue that holds all the pieces together. Street food in the bel paese is just as important as the iconic endless feasts in the popular imagination. We have tried to put together the best Italian snacks in a mouth-watering list. 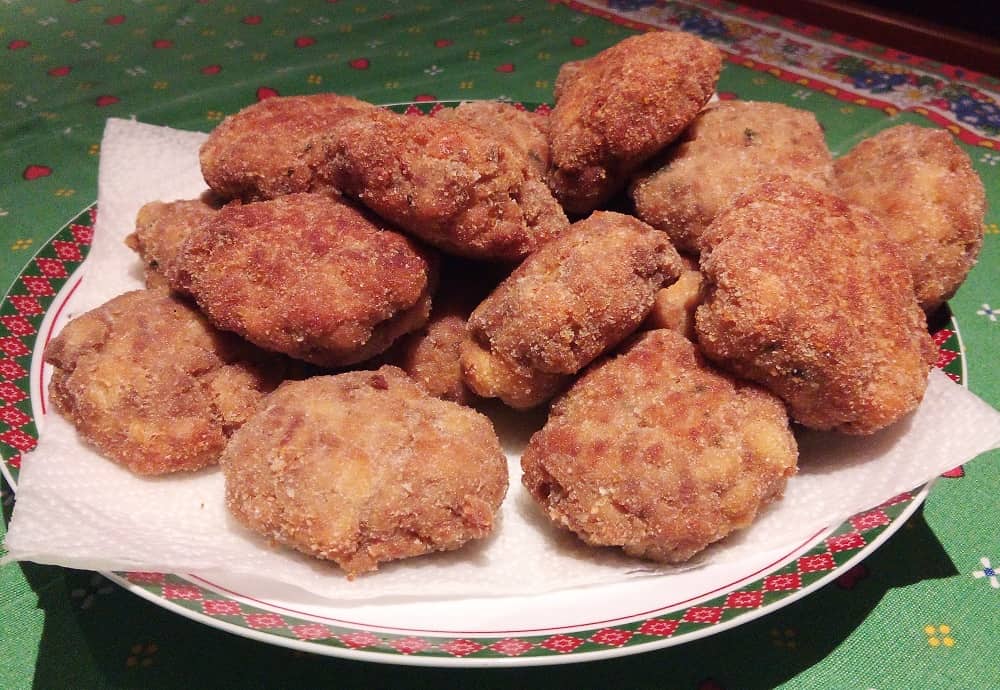 At first glance, you might take them for simple meatballs, but don't be fooled. Mondeghili are a typical Milanese street food traditionally prepared from leftover cooked meat and fried in butter. The recipe is ancient and is a legacy of the 150-year Spanish domain over the city. The name itself comes from the Catalan "albondiga", which in turn derives from "al-bunduc", an Arabic term for a sphere of fried meat. Subsequently, "albondiga", turned into "albondeguito", "albondeghito" and finally mondeghilo. Perfect for enjoying hot in a cardboard cone while strolling through the streets of Milan, this delicious dish is easy to reproduce at home using the essential ingredients: boiled meat, eggs, bread soaked in milk, and aromatic herbs.

What's bubbling in the gurgling vats of Palermo markets? A taste bomb with a strong and intense flavour that might not please all palates, but you can't miss this grease gem when in Sicily. The pani ca' meusa is a soft sesame bun stuffed with calf spleen, lung and trachea, first boiled and then browned in lard. Its history dates back to the 15th century, when the Jewish butchers came up with a lucky intuition to prepare and sell the interiors of the cow. Over the centuries, this same dish has evolved into a must of Palermo's gastronomy. There are two versions: maritatu, with the addition of caciocavallo cheese, and schettu, served with a simple squeeze of lemon. 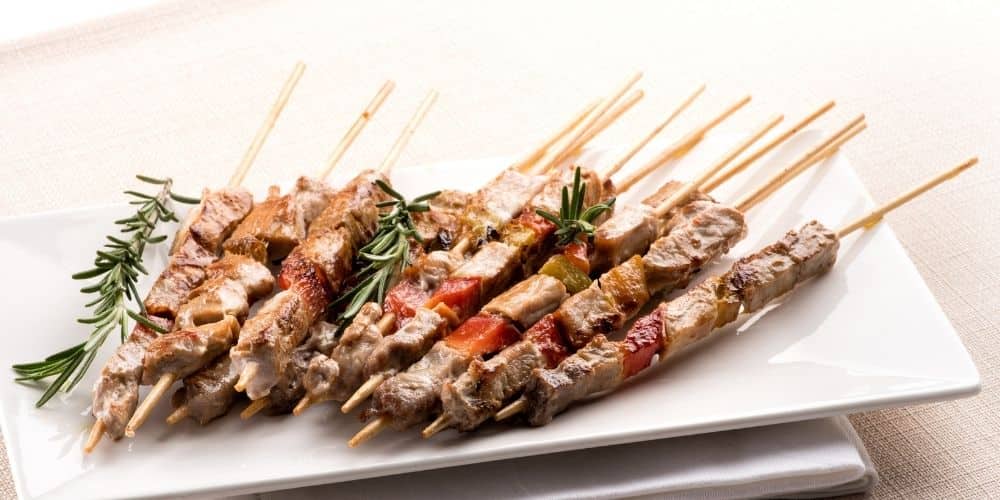 These typical Abruzzo skewers are the perfect combination of traditional local flavours and the easy-to-eat feature of street food. Made up of small cubes of sheep meat, arrosticini are cooked on a particular long brazier, the "furnacella" or "rustillire". The cooking process is crucial to the success of the perfect skewer, tender and succulent. To avoid an annoying chewy final effect, pieces of grease comes alternating on the spit. If all the steps are done correctly, the 'one pulls another' result is guaranteed. Being Abruzzo cuisine influenced by the area's pastoral tradition, the origin of arrosticini is rooted in the ancient custom of shepherds, who used to cook sheep meat during the transhumance. Usually, this delightful speciality is served without seasoning and accompanied by toasted bread drizzled with extra virgin olive oil. 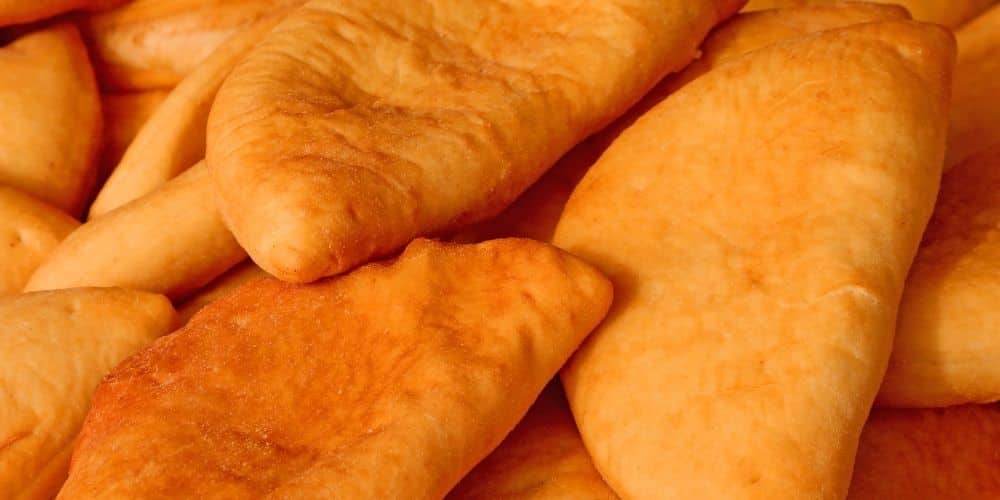 From Bari with love, the panzerotto is a crispy, hot, "stringy" delicacy that you can't miss. Fried or baked, these half-moons filled with tomato and mozzarella (but also turnip greens, ham, olives or meat) originated as a ploy to reuse leftover bread dough. Among the most famous Apulian dishes, panzerotti are perfect as a snack to be devoured wrapped in suitable wrappers while walking on the streets or prepared at home with friends and relatives during a cheerful "panzerottata". Today it is recognised as a Prodotto Agroalimentare Tradizionale (traditional food product). Gnocco fritto is an ancient dish whose origins can be traced to the Middle Ages and Lombard cuisine. While the ease of preparation and the use of poor ingredients made it famous as peasant food, it is now undoubtedly one of the prominent emblems of Italian cuisine. Travelling Emilia, you will probably find it displayed on deli counters with different names: "crescentina" in the Bologna area, "torta fritta" in Parma, "chisulèn" in Piacenza, "pinzino" in Ferrara. This rectangular or round fried dough goes very well with both sweet and savoury condiments. Try it with cured meats (mortadella di Bologna IGP, culatello di Zibello, coppa or cracklings), cheeses ( squacquerone and stracchino) or jams.

Not only is Naples a sensual, pleasure-loving, noisy, cultured city, but an El Dorado of taste too. It is challenging to pass through the streets and alleyways of the historic centre without being intrigued and tempted by the strong smells coming from the small, tiny kitchens that hide behind the equally small but overflowing shop windows that line the streets. A triumph of pizza a portafoglio, crocché, paste cresciute and ripieni. Street food is a concept that fits perfectly with this city and the Neapolitans' way of experiencing it. Of the many lavish snacks you can try, the cuoppo is undoubtedly one of the most successful. It is a wrapper full of fried foods, usually salted zeppoline, potato panzarotti stuffed with ham and cheese, pumpkin flower fritters, scagliozzi (pieces of fried polenta), rice balls and the inevitable frittata di pasta. You can eat a cuoppo at any time of day (and night) as a snack, aperitif or quick meal. 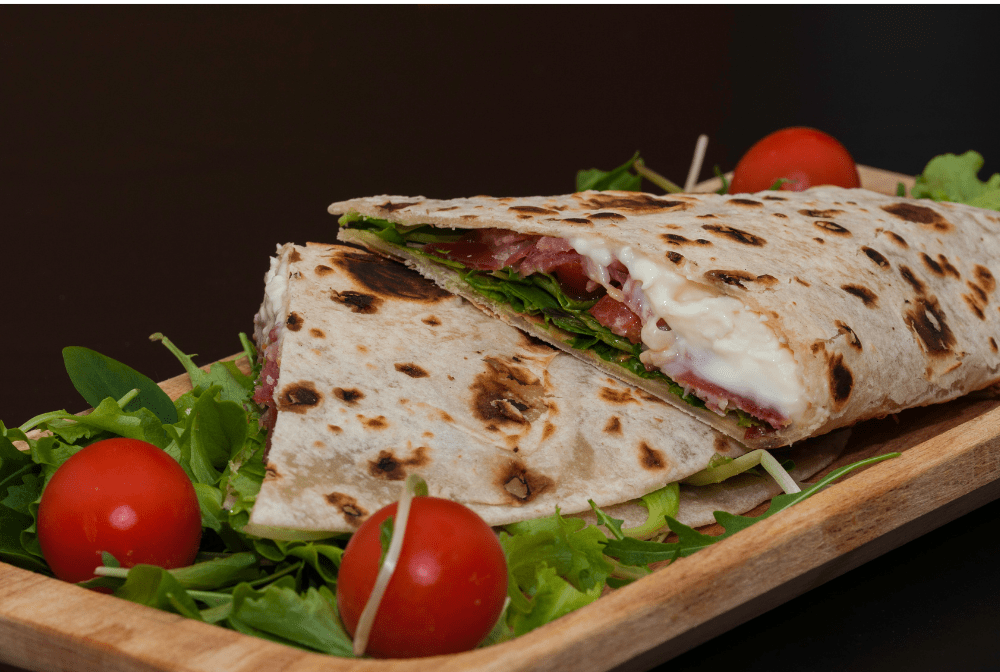 The goodness of piadina has conquered the whole of Italy, but it is only in Romagna that you can taste the original version. Traditional piadina is cooked on a testo (a thick earthenware dish) and filled with prosciutto, squacquerone cheese and arugula. Two versions bear the IGP label ((Indication of Geographic Protection): Piadina Terre di Romagna, particularly widespread in the hinterland and cities such as Ravenna, Forlì and Cesena, and Sfogliata di Rimini. While the former is smaller, thicker and softer, the latter is wider and thinner. Similarly, crescione (also known as cassone) is a tasty variant typical of the Riviera: small bundles prepared with classic piadina dough and various stuffings. 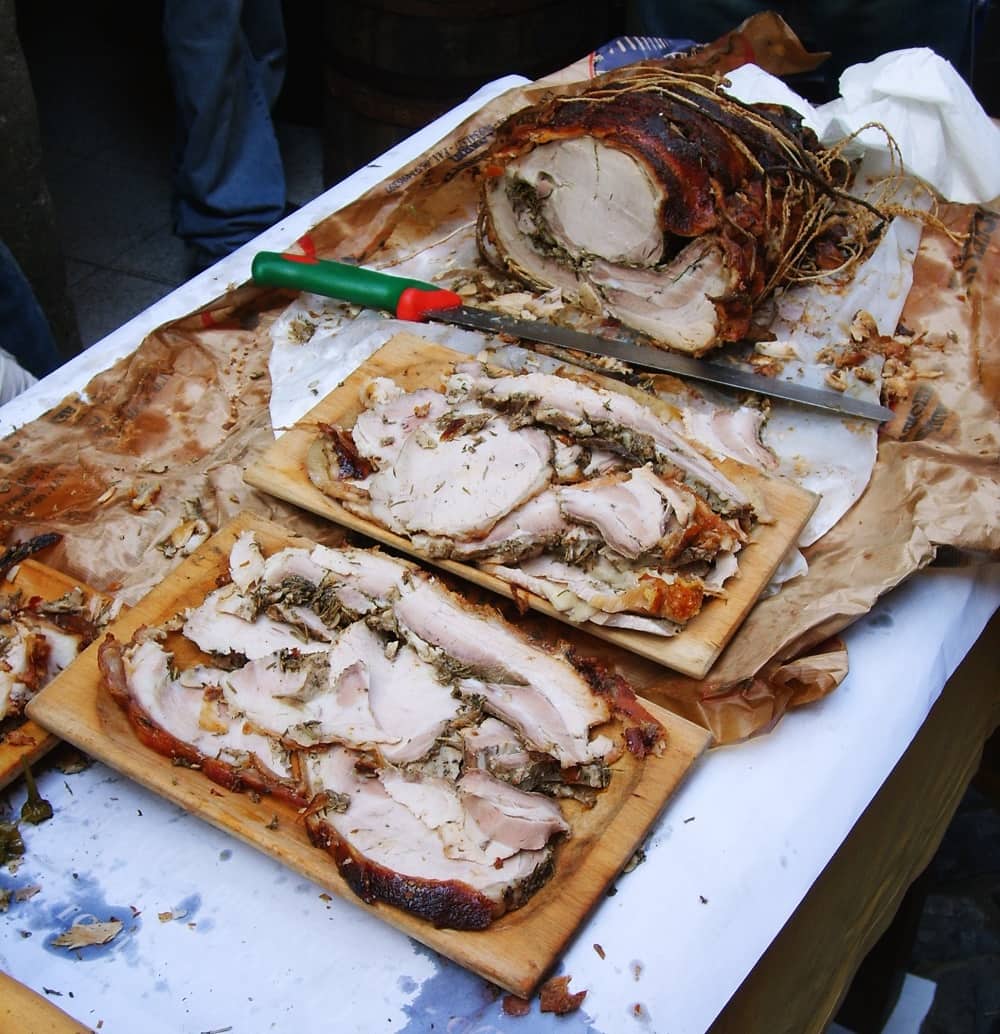 Fragrant and with an unmistakable spicy flavour, porchetta is a much-loved delicacy of central Italy. At every fair or sagra, there is always a "porchettaro"offering this tasty Italian hog roast version peeping out from scenic vans. A sandwich stuffed with porchetta is a gluttonous milestone of street food. Ariccia and Norcia are among the best-known towns that have made a name for themselves with one of the New York Times' "must-eat dishes". As is often the case with many classic recipes, there is no agreement on the exact place of origin and various are the schools of thought regarding the preparation of porchetta. What doesn't change, however, is the result - an exceptional explosion of flavour. 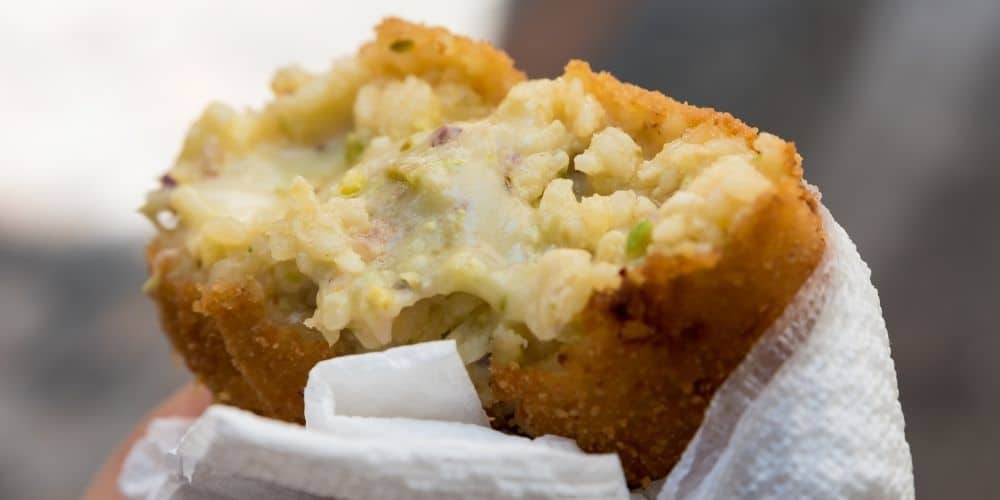 A golden and crunchy shell enveloping a soft, delicious heart: some people call them arancine and others arancini. The Accademia della Crusca has pronounced on the matter, asserting the correctness of both forms. Ultimately, the substance doesn't change: the tasty Sicilian rice timbales are among the most loved and replicated street food ever. The appearance might remind of an orange (hence the name), although you can also find them in a characteristic conical shape, perhaps a tribute to Mount Etna. There are many varieties, but the original recipe calls for saffron rice seasoned with meat sauce, a core of stringy cheese and a double breadcrumb coating. Excellent all year round, in Palermo they are traditionally eaten on 13 December, Saint Lucy’s Day. 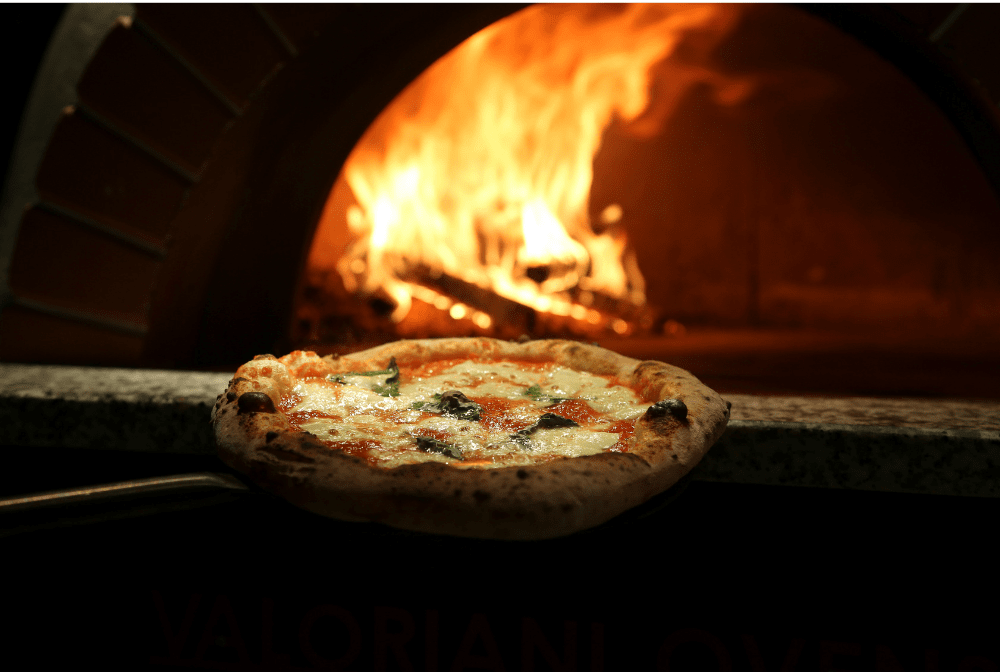 A symbol of Italy throughout the world, whether fried, stuffed or sliced, pizza is the queen of Italian street food. In Naples, the takeaway version is folded in four so that you can quickly eat without the use of cutlery. Called pizza a portafoglio, it is smaller than the classic pizza served on a plate and is a milestone of Campania street food. And what about fried pizza? A true bombshell of calories and goodness: a half-moon generously filled with cracklings, ricotta, provola, and pepper. Definitely a challenging snack. Pizza al taglio, on the other hand, opens the door to a different way of combining textures and flavours. It became famous during the 1950s in Rome and soon filled the windows of bakeries and delicatessens as a perfect snack to eat on the run or during an informal meal with friends. Amid an infinity of types, the most famous remains the iconic pizza bianca.