Marche cuisine is varied as well as its landscapes. It's the only Italian region with the plural name. This "plurality" is also reflected in its culinary habits. Its lands extend between the Adriatic Sea and the Apennines, covered by woods and hills. So it must not surprise us if this contrast happens on the table too, meeting dishes that combine sea and mountain food.

Mushrooms, olive and truffles: the three foundations of Marche Cuisine

The Marche cuisine is the rustic cuisine of the mountains, tasty of the hills and exquisite of the sea. In its recipes, there are the flavours of its typical products, like truffles, mushrooms and olive.

The relationship between Marche and truffle is very strong!  It's often used as a sauce for pasta dishes and snacks. Here we found all the kind of truffle: the white and black one. One of the finest is Acqualagna truffle.

For the mushrooms, in the Marche region there different edible varieties such as Porcini, mushroom of St. Giorgio, Ovuli, Spugnole, Prataioli, Galletti, Morette, Mazze di Tamburo and Nebbioli.

About the olive, we can only speak well of its stuffed olives with meat and perfectly fried. The "real" ones are made with the local variety, that it's smaller and softer of the average. Making them it's an extremely delicate and difficult thing! The original recipe requires a mix of young beef, pork and chicken browned cubes in a souté of vegetables: celery, carrots and onions. Everything is ground and amalgamated with eggs, parmesan, nutmeg and lemon peel.

The crescia of Marche 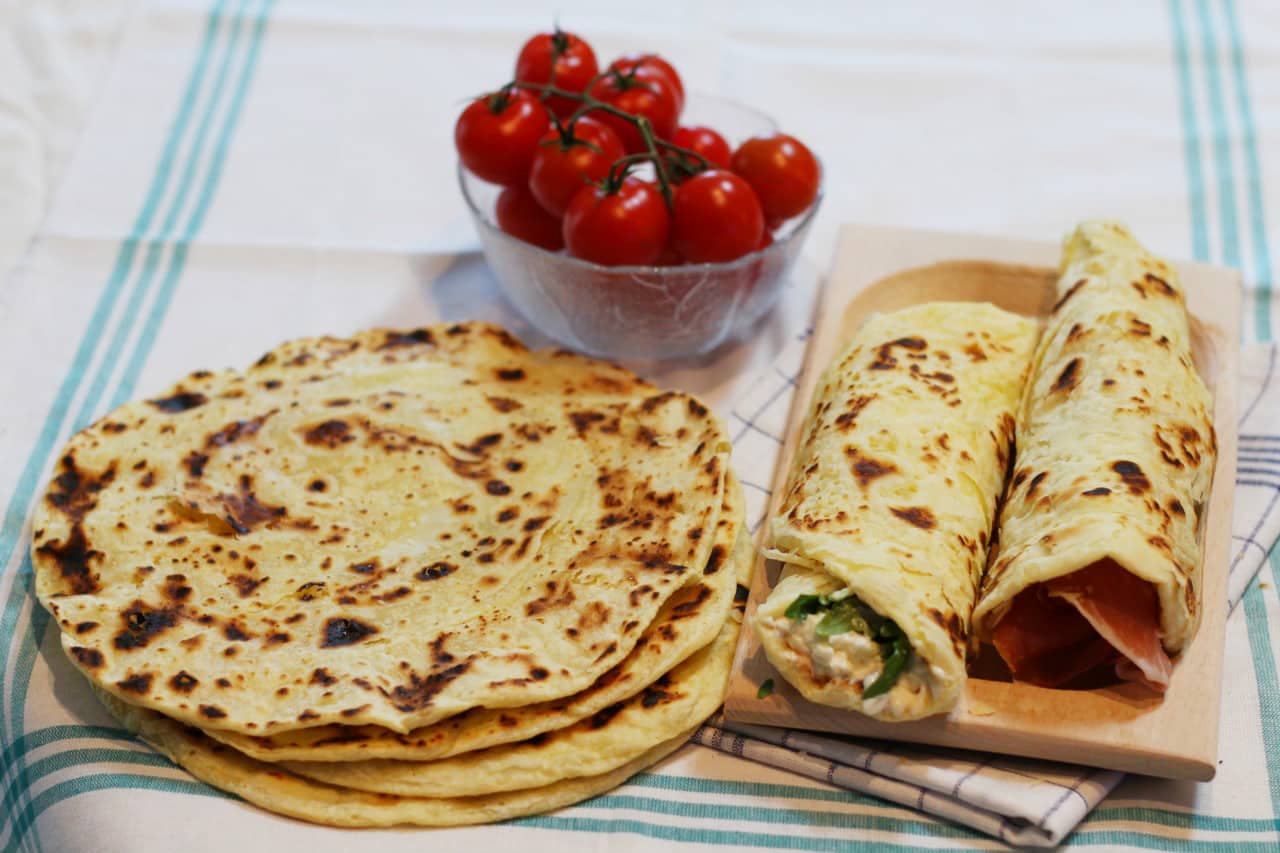 The crescia looks like focaccia or piadina (flatbread) and its preparation has different declinations, depending on its origin. The two most famous kinds come from Pesaro and Urbino.

One is the crescia sfogliata, made with flour, water, eggs and lard. The best way to eat it is warm and with sausage and cheese.

The other one is called the Crostolo of Urbania and made with cornflour.

Elsewhere, the crescia is greased with lard and olive oil, enhanced by scarps of polenta and pork crackling. Otherwise, as the case of the chichiripieno of Ascoli, it's already stuffed!

In the end, in more northerly places, the crescia takes on a completely different meaning: it becomes a salad cake risen and filled with cheese, a typical Easter dish of the region. 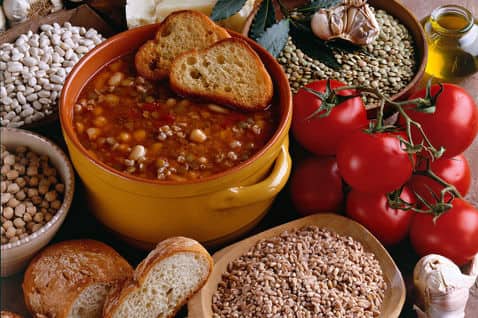 The ciavarro is a soup of cereals and legumes typical of Ripatrasone, in the province of Ascoli Piceno. It's a poor dish of peasant origin that used to be prepared on the occasion of the 1st May, the symbolic day of passage between the new and the old supplies.

Indeed, in the local dialect "Lu chavarre" means "the remnants", which is the grain, stored during the winter and, finally usable in view of the new season. Among them: grain, barley, sweetcorn, broad beans, beans, peas, lentils and cicerchie.

The cicerchie is a typical legume of Marche. The most famous are those of Serra de' Conti, in the province of Ancona, that have become part of Slow Food Presidium.

Upstairs with the Vincisgrassi

The vincisgrassi is the emblem of Marche cuisine during the Sundays and holidays. It looks like the lasagna Bolognese, but there are some substantial differences. The vincisgrassi:

has at least seven layers,has a totally red sauce, without béchamel,its sauce is enriched with greiji (or chicken liver and entrails).

Someone even puts inside the pasta some cooked wine. The most famous version of this speciality comes from Macerata: with meat sauce, pieces of giblets and béchamel.

But beyond the local controversies about some ingredients, the real mystery of vincisgrassi is about its name and origin.

The pasta of Marche 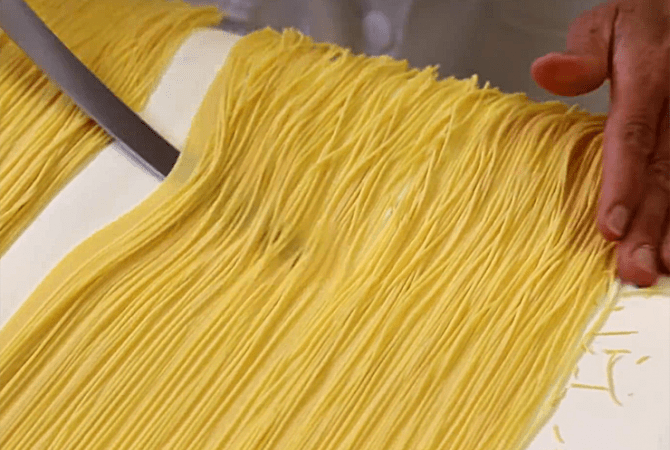 About the pasta, Marche has got a good selection of local formats to choose from.

Among them, there are the maccheroncini di Capofilone, a kind of egg pasta PGI. It took the name from the little town in the province of Fermo. They developed preserving fresh eggs until they are dry. The maccheroncini is a pasta very thin, similar (but not the same) to the tagliolini. At least once in your life, you must try it with the meat sauce of Marche, made of beef, chicken, pork giblets and a lot of pecorino cheese.

For its shape and making, then, we remember the lumachelle of Urbino, similar to seashells; torcelli and stroncatelli, typical pasta of the Juwish community of Ancona and similar to thin spaghetti; and the tacconi, a speciality of Motefeltro, that it's a diamond-shape pasta made with flour and broad beans.

The Frascarelli: from the polenta to the rice 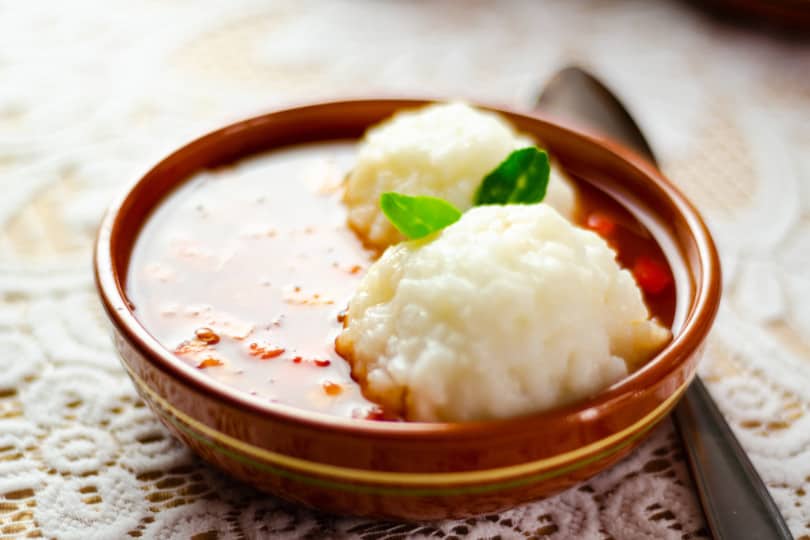 The frascarelli are made with flour and lums of overcooked rice. Maybe it is one of the poorest dishes of the Marche tradition. It's also called polenta rice or corco rice. Originally, there wasn't the rice in this first course. In the beginning, it used to be associated with the medical world and used as a kind of spice.

The frascarelli, therefore, were born as white flour polenta, deliberately with "lumps". These lumps come out crushing in its mixture some water and some twigs (called "frasche"= branches). Then the recipe has been integrated with the rice, that today is maintained with flour and cooked slowly until it reached the texture of porridge.

Rarely you will see the frascarelli served "in bianco" (plain). Some of the typical dressing requires sausage, pecorino cheese, vegetables or white truffle of Acqualagna.

Salami and cheese of Marche 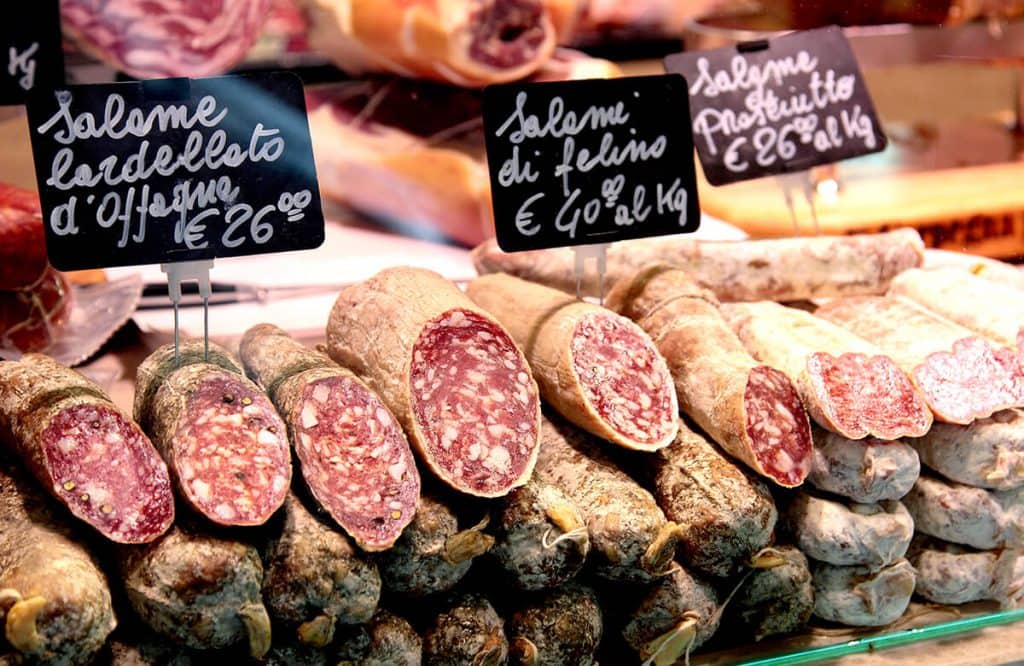 The production of cold cuts and dairy products in Marche has a very long tradition. On the table of every family or during the happy hour, there is always a cutting board full of salami and cheese.

Among the typical salami of Marche, there is the famous ciauscolo, in dialect "ciasculu", from the area of Macerata. It's characterized by its spreadability. In traditional rural style, it's eaten at the end of meals too. It's made mixing different parts of pigmeat and adding crushed garlic, pepper and wine. In 2006, it has been awarded the PGI recognition (Protect Geographic Indication).

Instead, in the province of Ancona, precisely in Fabriano (famous for the paper too), there is one of the typical salami of Marche: the Salame Lardellato. It's made with the pigmeat. The porks are directly raised in this area. The meat is chopped in several steps, which is added the ham cubes, the black pepper and the wine. It's characterized by the intense reddish colour of its meat.

About the cheese, we have the pecorino conciato di Fossa, which is wrapped in walnut leaves and then aged in terracotta amphorae. Among the other, there are the caciotte, including those with truffle, artichokes and that one of Urbino.

Wine and happy hour in Marche 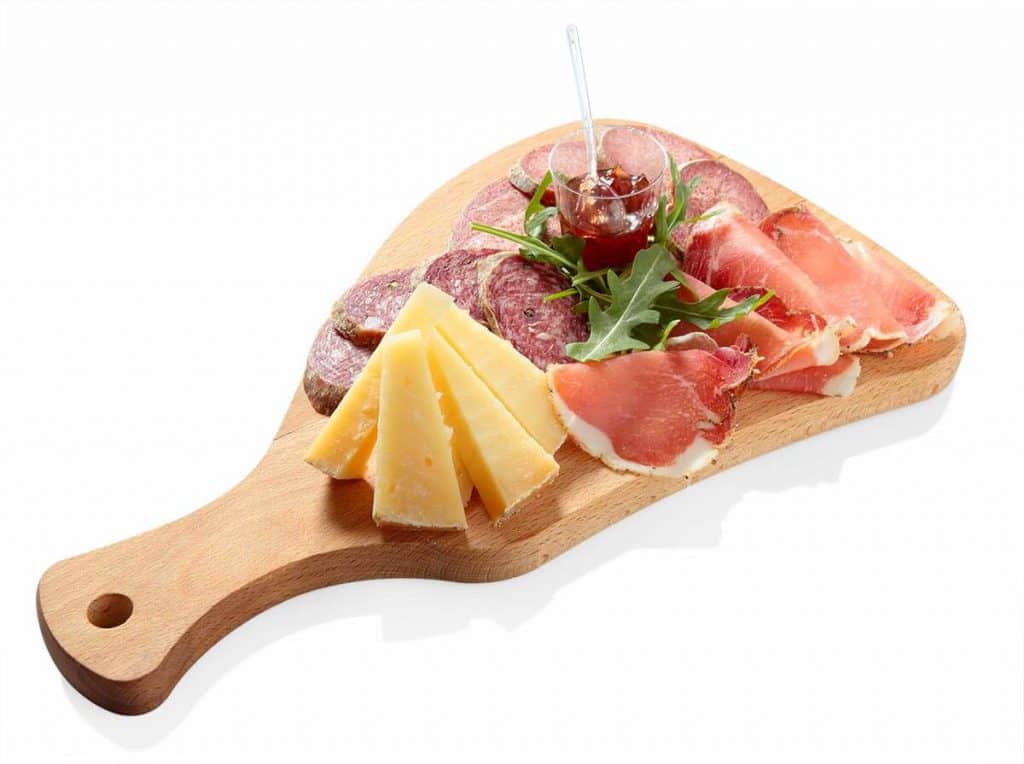 In every part of Italy, it's custom in the late Sunday mornings or in the evening before the dinner to have the "happy hour" or aperitivo. It consists of a drink and some snacks.

During a typical aperitivo of Marche, a cutting board full of all the best salami and cheese of the area can not miss! And as a drink, a great glass of Verdicchio dei Castelli di Jesi, one of the best wine of the region.

Put on the cheese one some of the marmalades, jam and honey of the area! They are made with the fruit of Marche hill. You will enhance the true taste of this wonderful region...

Accompany the salami with bread and olive oil! Try its extra-virgin olive oil flavoured with white truffle, truffled anchovies or the many truffle creams.

If then you would like a dessert, try a slice of bisciola! It's a kind of bun made with dried fruit, butter, eggs and sometimes honey. It's a Christmas typical cake too. 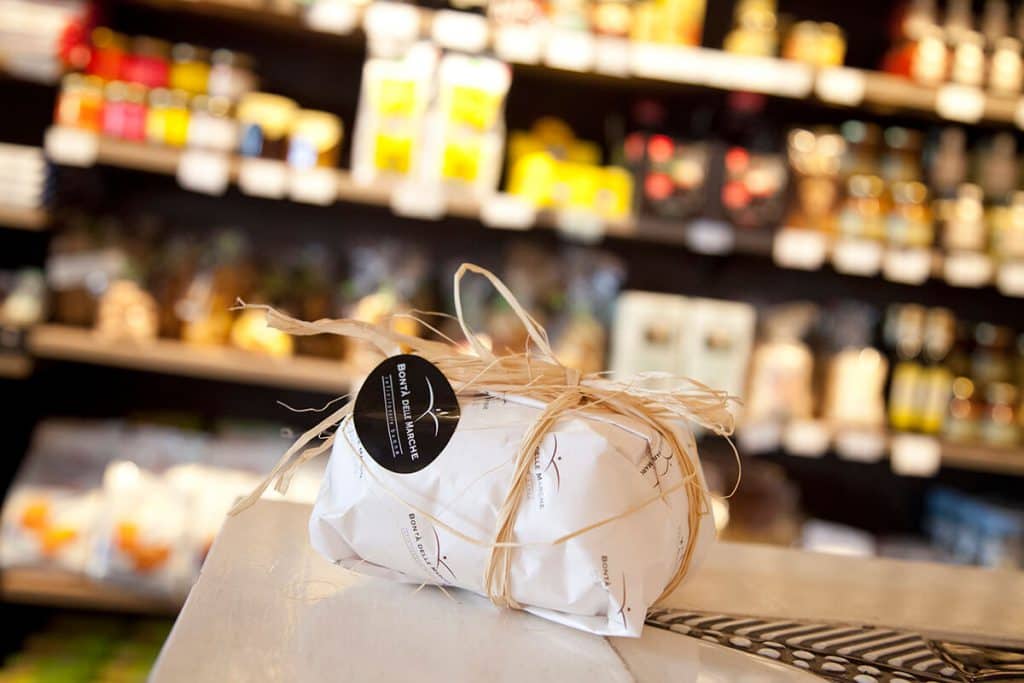 If you want to taste at home the flavours of Marche, we suggest you rely on the services and products offered by Bontà delle Marche. A commercial reality that was born in 1997, passed down from father to sons. Their mission is to promote the culture of good food and good drinking and, in particular, to get to known everywhere the best products of the culinary tradition of Marche.

Bontà delle Marche offers rich gastronomy made of all the best regional excellence. Unique ingredients stand out for their high quality. The best pork butchery, cheese and typical products to accompany a selection of prestigious local labels.

Bontà delle Marche has a restaurant too. It's located in the historical centre of Ancona. It offers as well as a catering service available not just into the region, but also in some of the most important Italian cities like Milan, Rome, Naples and Verona.

Bontà delle Marche with its professionalism and experience is always ready to satisfy all your needs and demands. A perfect gift for any occasion that delights your palate and soul. A gastronomic journey that will give you taste and joy!