All Italian bread, region by region: traditional recipes from north, center and south of Italy

All the Italian bread, region by region 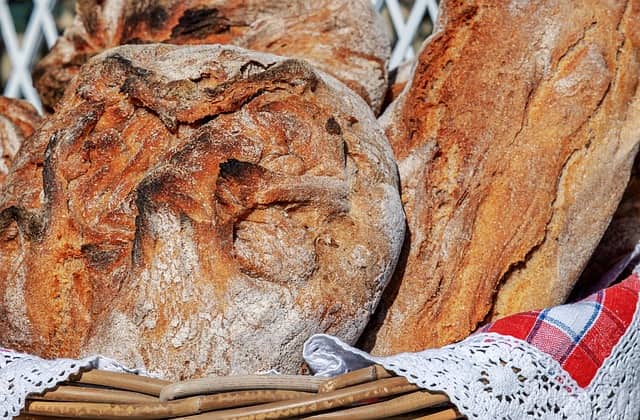 It can never be missing on an Italian table. Without it, it is not even considered set. What are we talking about? Of course bread, the staple food of Italian food and one of the most sought after foods by foreign tourists on Italian holidays. Italians love bread so much that during the first lockdown many people wanted to bake it at home, rediscovering the ancient recipes of grandmothers. In Italy there are many forms of bread, which can be divided according to the type of flour used for the preparation. In the North, in fact, the flour of common wheat or other seeds is mainly used, while in the South, durum wheat flour and semolina are preferred. Discover them all with our bread map region by region.

Our journey into Italian white art starts from the mountains of Val d'Aosta with its rye bread with an intense aroma, perfect for fondue. In Piedmont the lords of the table are definitely grissini (breadsticks), long, crispy and elegant. In Lombardy you immediately think of the michetta (aka rosetta), the round sandwich with soft and fragrant crumb, for a quick lunch or a tasty snack. Liguria, land of focaccia, also boasts the sandwiches called libretti (little books) for their rectangular shape, and the ancient bread of Triora, the "country of the witches". Moving towards the North-East, in Veneto we find the well-known biscuit bread, typical of the old farmers; in Trentino Alto Adige the pan de molche, so called because it is kneaded with the solid residues of the pressing of olives during the production of oil. Friuli Venezia Giulia recalls the strong Mitteleuropean influence with the Pan di sorc, a loaf of corn flour with a sweet taste. Descending beyond the Po river, Emilia-Romagna is known for the particular Ferrara Couple, a bread produced in Ferrara by the curious cross shape of S.Andrea. And finally, to complete the Northern Italy, Tuscany and its bread, prepared without salt, to accompany wines, cheeses and cold cuts.

From the heart of Italy, precisely from Umbria, comes the Pan nociato, which, as the word itself says, contains walnut kernels. In Lazio we find the first PGI product of our journey, namely the homemade bread of Genzano, a dark loaf prepared with sourdough, wheat flour and mixed cereals. In the Marches you can taste the homemade vein, while Abruzzo, to be enjoyed with the palate and eyes, is the Wheat bread, so called because it is engraved giving it a form of wheat ear after cooking.

Bread of Southern Italy and Islands

Let's end this tasty trip with the South. Molise gives us the parrozzo, a bread made with boiled potatoes and corn flour. Campania has its own "pane cafone" (rude bread) and tasty oil sandwiches. Puglia preserves the excellent Altamura DOP bread, with a thick and crispy crust and yellow semolina crumb, while in Salento you can taste the soft pucce that recall the breads produced in the Middle East. In Basilicata the jewel of the table is the bread of Matera PGI, durum wheat semolina, while in Calabria there is the excellent chestnut bread. And finally, arriving at the islands, in Sicily you can taste the muffulette, sandwiches enriched with sesame seeds, and in Sardinia the protagonist is the original Carasau bread, a delicate and crunchy puff pastry, also called paper music for the noise while eating it.