Alessandria and its food and wine traditions: from villages to castles

Alessandria, a city and province in Piedmont, lies on the plain formed by the Tanaro and Bormida rivers: it is a land of multiform cultural expressions. Wines and food become the culture and even art, dressing in history and exciting stories for residents and tourists.

Alessandria, an historical city in Piedmont

Alessandria possesses a diversified historical and artistic heritage, with deep-rooted content in the territory and in popular culture, often defined as a mosaic, made up of many pieces, individually beautiful, that generate an incomparable overall design of the territory.

As stated in the municipal coat of arms, the city's motto is "Deprimit elatos, levat Alexandria stratos", or, "Alexandria humbles the proud and exalts the humble".

Food and Wine in Piedmont

Piedmont is a land of excellent wines and good food prepared according to popular traditions, satisfying any palate. Gourmets in these parts will never be disappointed.

The recipes of the Alessandria cuisine are part of the popular tradition of Monferrato, but they also have a lot in common with Ligurian and Provençal cuisine.

The essential ingredients are mainly meat, red wine such as Barbera or Barolo, used for cooking or to accompany hearty dishes. But spoon desserts such as bonet, street food desserts such as sweet focaccia or Lacabòn (typical cake in Alessandria), mixed hors d'oeuvres of cold meats and Russian salad.

Alessandria at the table

In the province of Alessandria, you can savour the delicate taste of ricotta and herb gnocchi invented by farmers who, in spring, used the best ricotta of the year to make them.

Swiss chard, spinach, nettle and wild herbs: everything contributes to the creation of rabatòn, the vegetarian dish of humble origins that is now considered refined and the protagonist of the towns known as the Fraschetta.

In Litta Parodi, a village of a thousand souls to the south-east of Alessandria, rabatòn, whose name comes from "rabatare" - to roll up in Piedmontese - has been a typical dish since 1981 and since 1999 has been protected by the "Confraternita du rabatòn" of Litta Parodi, which claims its paternity.

The rabatòn was born thanks to transhumance: on their way home after grazing, they would stop in the Fraschetta municipalities to go shopping. In exchange for bread and other foodstuffs, they bartered ricotta cheese and wild herbs, which the housewives mixed with the classic ingredients for the dough: eggs, wet bread and breadcrumbs. Every first weekend in September for the last twenty years, they have been the protagonists of a festival attracting hundreds of admirers to the village. According to the confraternity, there is no secret ingredient, but no one in other festivals manages to prepare it like in Litta, strictly in seven portions.

A typical dish of traditional Piedmontese cuisine is Pollo Alla Marengo (a typical dish chicken-based), which is rich in ingredients because it consists of prawns, mushrooms and fried eggs.

They prepared this dish for the first time after one of Napoleon's most important battles, the Battle of Marengo (Alessandria), fought on 14th June in 1800, and it seems that Napoleon has been requesting it ever since to seal his victory.

Created by chance, due to a lack of ingredients, Pollo Alla Marengo is today a traditional Alessandria recipe not to be missed.

Among the desserts of Alessandria, the most characteristic is certainly the Lacabòn di Santa Lucia.

This is typical of the feast of Santa Lucia on 13th December, which is a festival much loved by the people of Alessandria.

For the occasion, the city dresses up with lights, fragrances and colours that create the atmosphere that has characterised the lives of Alexandrians from childhood to old age and has continued to do so for generations.

These are hardened caramel sticks made with honey and sugar and sold wrapped in white greaseproof paper. A sweet to be enjoyed in the street, enjoyed by adults and children alike.

The great strength of Piedmont is inherent in the heterogeneity of the territory: the various production areas differ significantly from each other, giving unique typicality to Piedmontese wines.

Barbera is the most widely grown black grape variety in Piedmont, particularly in Asti and Alessandria. According to what we learned, it seems that the well-known Ampelographer, Giorgio Gallesio, in his 'Pomona Italiana' speaks of Barbera as 'Vitis Vinifera Montisferratensis'.

It was not until 1700 that Barbera began to spread to Astesana, Monferrato, Alessandrino, Tortonese, Vercellese and Novarese, and in 1798 it became part of the list of Piedmontese grape varieties.

This wine is very pleasant to drink for its aromaticity and intensity. It has just enough spice to make it very intriguing at the right point. It has high acidity, so much so that it is considered one of the most acidic vines, despite growing in places with a hot, dry climate. In particular, Barbera di Monferrato is the most drinkable, with cherries in evidence and a relatively concentrated acidity.

We can pair Barbera with various dishes: from an aperitif to more elaborate dishes such as vitello tonnato, risotto with truffles and game, as it is a wine that brings out the even more robust flavour of the dish itself.

"Something to drink", in Monferrato, means a nice glass of red wine. One of the most characteristics is Grignolino, a typical wine from the Asti and Monferrato areas that is particularly rich in aromas. Grignolino has always been appreciated and drunk as a high-quality wine often reserved for the wealthier classes. Gallesio cites it as "a light-black, loose wine of mediocre strength that does not go to your head and is diuretic". "It is, in fact, the table wine of all wealthy people".

Its colours vary from ruby to garnet, always bright and full of charm. The aromas derive from the typicality of the vine and the years that have passed since the harvest: they range from small fruits, black cherry, cherry, redcurrant and raspberry to hints of rose or iris, sometimes withered, graphite, candy, fresh grass, up to and including citrus sensations, traced back to chinotto or orange peel. Exciting, at times, is the presence of an elegant haematic note and spicy sensations traceable to pepper or cloves.

Albarossa is an autochthonous Piedmontese vine found in Alessandria, Asti and Cuneo Areas, particularly in the Acquese and in the area of Northern Asti.

This vine was 'invented' in 1938 by Professor Dalmasso who crossed Nebbiolo di Dronero with Barbera. The name is simple: Albarossa. But there is so much that goes into it.

Professor Giovanni Dalmasso, one of the most authoritative ampelographers Italy has ever had, created a series of varietal crosses that were archived in a wine collection in the Piedmont region and never planted. However, some fifty years later, Professor Mannini of the CNR in Turin decided to study these crosses closely, planting them in the Tenuta Cannona, the Piedmont region's experimental winegrowing centre. Among these was Albarossa, a black grape variety obtained from a cross between 'mother' Barbera and 'father' Nebbiolo.

The result is a ruby red wine with violet hues, an intense and complex bouquet: fruity sensations prevail over floral ones in it, and there is added a spicy component, tobacco, with a warm taste thanks to the high alcohol and glycerine content, never dull due to its right acidity, well structured, harmonious and velvety, with high fullness and persistence of taste.

Turin's Azienda Sperimentale Tenuta Cannona and the Centro di Miglioramento Genetico di Biologia della Vite (CVT) have carried out many studies on this vine. Thanks to them, it was introduced in 2000 among the recommended grape varieties in Piedmont.

Finally, Monferrato Freisa is a DOC wine whose production is allowed in the provinces of Alessandria and Asti. It is made from a pure expression of one of its many indigenous red grape varieties, which manages to generate elegant wines in the Monferrato area.i The Freisa grape variety has only taken root in the Monferrato area, and mainly in what is known as Basso Monferrato. It is 500 years old and goes well with regional meat starters, particularly grilled meats, lightly seasoned salami and seasoned cheeses. The sweet Freisa goes well with biscuits and dry cakes, ideal for cornmeal and chestnut cakes. 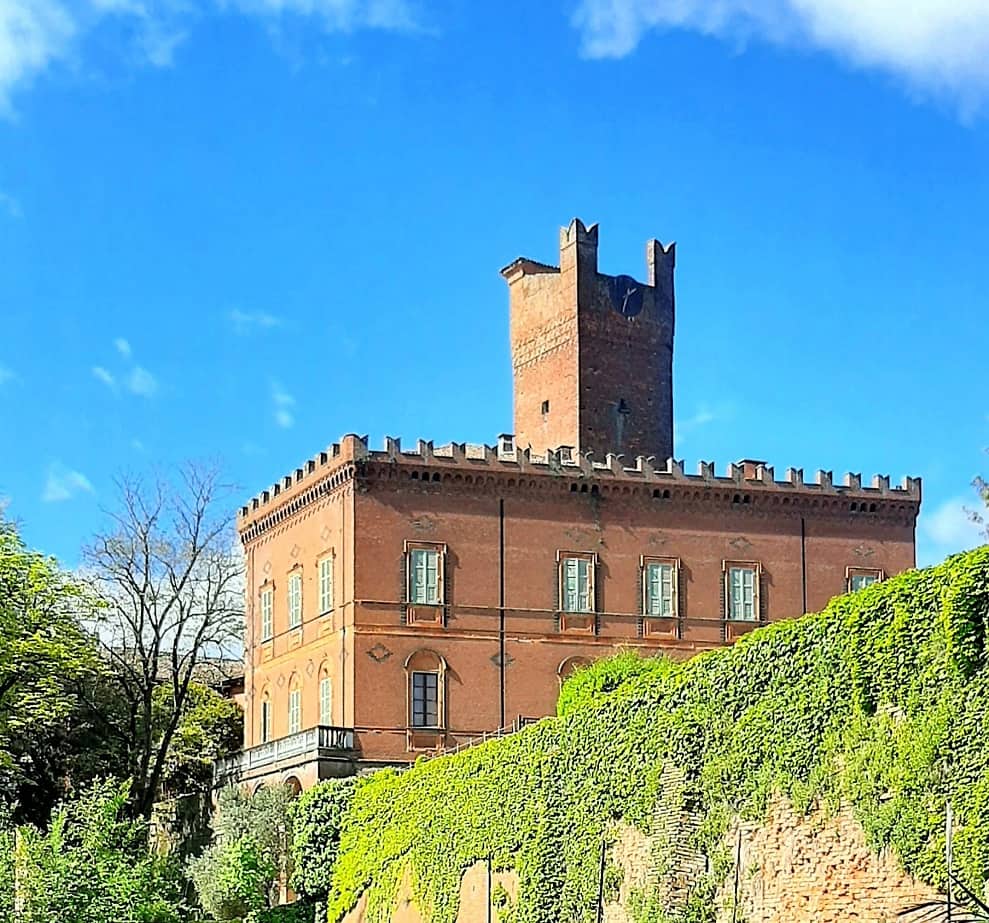 A perfect example of history and food and wine in the province of Alessandria is the Castle of Uviglie. Exactly in the municipality of Rosignano Monferrato, on a gentle hill from the top of which you can admire one of the most beautiful views in Piedmont, stands the Uviglie Castle, whose first historical references date back to the second half of the 13th century.

The castle, transformed over time into a noble holiday residence, offers spacious frescoed halls overlooking the hanging portion of the "Italian Garden", and is a renowned producer of high quality wines.

Noteworthy, in fact, are the grand cellars located below the salons of the noble wing of the castle, which perpetuate an uninterrupted wine-making tradition dating back to 1491 and preserve an appreciable private collection of bottles, together with ancient barrels and a series of master coopers' tools.

To visit is the castle park is predominantly romantic in style and has been designated by the Region of Piedmont as a 'Historic Garden of Botanical Interest'.

The park contains essences typical of our climate and also from Asia and America. It houses the chapel of Sant'Eusebio with the crypt of the Pico Gonzaga counts and offers extensive panoramic views of the surrounding area.

On the strength of an agricultural tradition dating back more than half a millennium, today the Castello di Uviglie, owned by the Bonzano family, is a dynamic and modern wine-producing reality, with a total area of 120 hectares.

After careful selection, the grapes are processed and interpreted to enhance and make the most of everything that the season and the land have expressed in the bunches in the vinification phase.

In the cellar, equipped with the most modern technologies, wines are produced that remain faithfully and firmly anchored to the typicality of the place and to traditional methods.

Castello di Uviglie focuses, in particular, on the indigenous grape varieties of Monferrato, from the highest hills of Rosignano, enhancing the renowned productions of Barbera, Grignolino, Albarossa and Freisa: all wines with character, pleasant and punctual, and of excellent quality. Wines represent the fruit of a great passion and of unconditional love for the territory and the land.