10 Recipes for an Italian vegan dinner

Italy is famous all over the world for its culinary tradition, which also includes delicious vegan recipes. In this article, 10 have been selected.

In this article we will illustrate 10 vegan recipes with an unique Italian style:

Remove the stalk and the cap of the tomatoes, then extract the pulp and keep it aside. Boil a spoon of rice per tomato in salted water for 5 minutes and mix it with the pulp that was removed. Then add a generous amount of crushed  basil. With the proceeds fill the tomatoes, which are salted internally. In a baking dish, arrange thin potato slices with oil and place the tomatoes on them. Cover each tomato with the previously cut cap, add oil and bake at 170 ° C for 45 minutes.

Mix the flour with water and let the covered dough rest for 20 minutes. Then chop a sprig of rosemary, blend it with the chickpeas and 2 tablespoons of soy sauce. Flour the work surface and roll out the dough by dividing it into 2 strips. Put the filling in a pastry bag and distribute by strip into small balls making the casoncelli as in the traditional recipe. Peel the apples, cut them into pieces and cook them with half a glass of water and a little salt for 15 minutes, then blend. Once the casoncelli are cooked, drain with the pureed apples, salt, a drizzle of oil, raisins, lemon and orange zest. 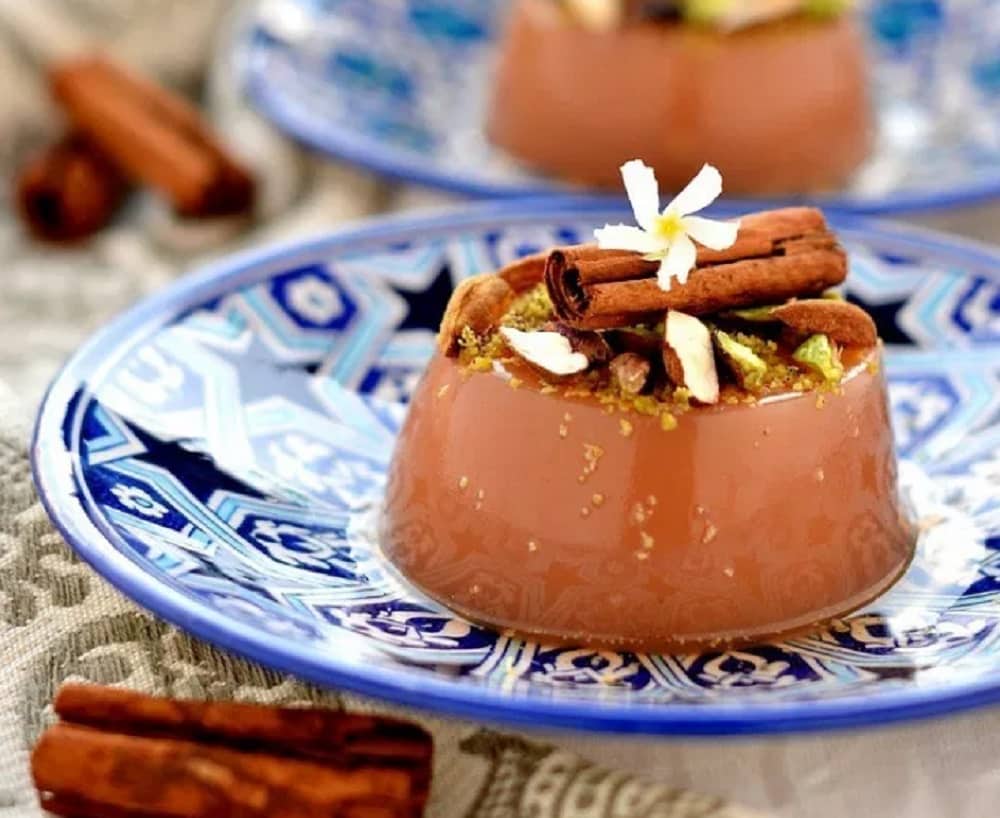 Soak the cinnamon sticks for a whole night in half a liter of water, then boiled the next day and left to rest for the rest of the day, then filter the water and set it aside. Meanwhile, peel the pistachios and in a saucepan add the starch and sugar, then pour the filtered water. Place the saucepan on the fire and stir until the mixture thickens, then pour into bowls and allow it to cool. Finally add the chopped pistachios on the surface.

You start by creating a sauté with onion, carrot and celery by passing it through a mixer. Heat some oil in a pan with the chopped herbs, browning it for 15 minutes until the sauté is dry. Subsequently, chop up the seitan and add it to the sauté, stirring for a few minutes and blending with white wine. When the mixture is dry, add the tomato puree and mix on the stove for another 40 minutes, adding pepper of your choice at the end of cooking. Pair it with your favorite pasta. 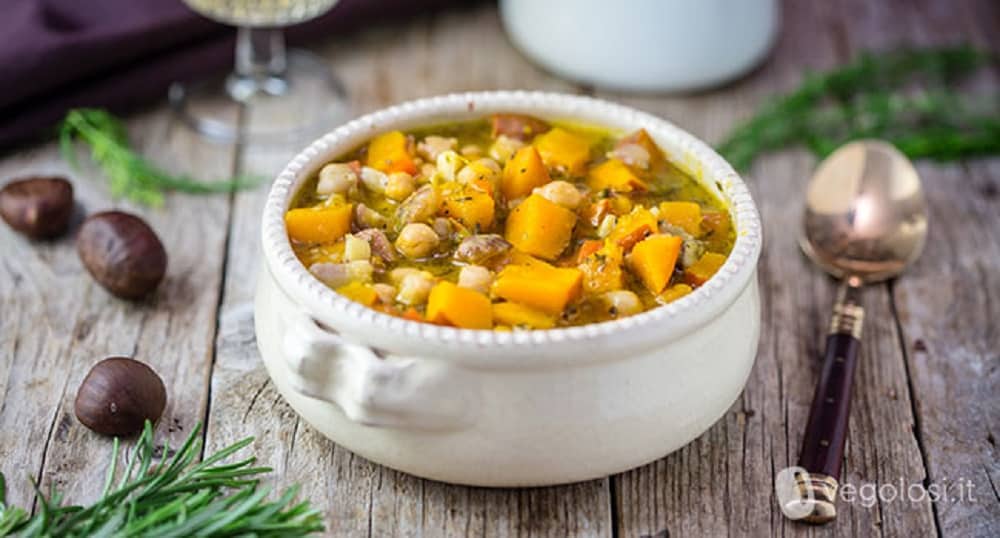 Cut the pumpkin into small cubes and then chop the shallots and carrots. Then mince the aromatic herbs and brown them with a little oil for about a minute. Immediately after, add the shallots and carrots and continue to cook for another minutes. Then add the pumpkin and brown for 5 minutes. Finally, add the chickpeas and the chopped chestnuts, add vegetable broth and let it boil for 15 minutes. 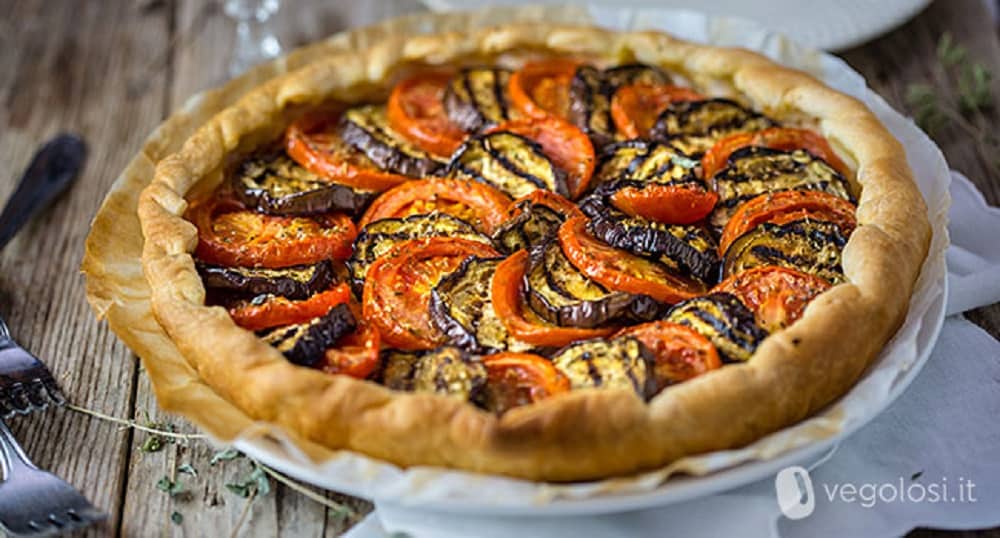 Cut the aubergines into half-centimeter slices and grill on both sides for a couple of minutes. Blend the herb tofu together with dried tomatoes, salt, pepper and 2 tablespoons of oil. Cut the tomatoes into slices half-centimeter thick. On a cake pan, roll out the puff pastry roll and pour the tofu cream over it, creating an even layer. Arrange the slices of roasted aubergines and tomatoes in concentric circles, add a little salt brush the surface with oregano oil. Finally, bake in a ventilated oven at 200 ° C for half an hour.

Start by preparing a sautéed onion in cubes, garlic, oil and salt in a pan. Then add a pepper cut into cubes and after a few minutes add the aubergine cut into cubes. Season with salt, pepper, paprika and nutmeg and leave it to cook for another 5 minutes. Then add the tomato pulp, chickpeas and a glass of water and cook for 20 minutes.

It is a cold salad of stale bread soaked in water and cut into small pieces to which are added tomatoes, cucumbers, red onion, salt, pepper and extra virgin olive oil.

In the first version it is re-minced semolina, boiled potatoes, water, yeast and salt, the mixture of which is spread on a baking tray sprinkled with oil where it is left to rise for a few hours. Usually it is stuffed with cherry tomatoes cut into half and black olives from Bari. In the Taranto variant the filling is made up of thin slices of white onion and black celline olives. 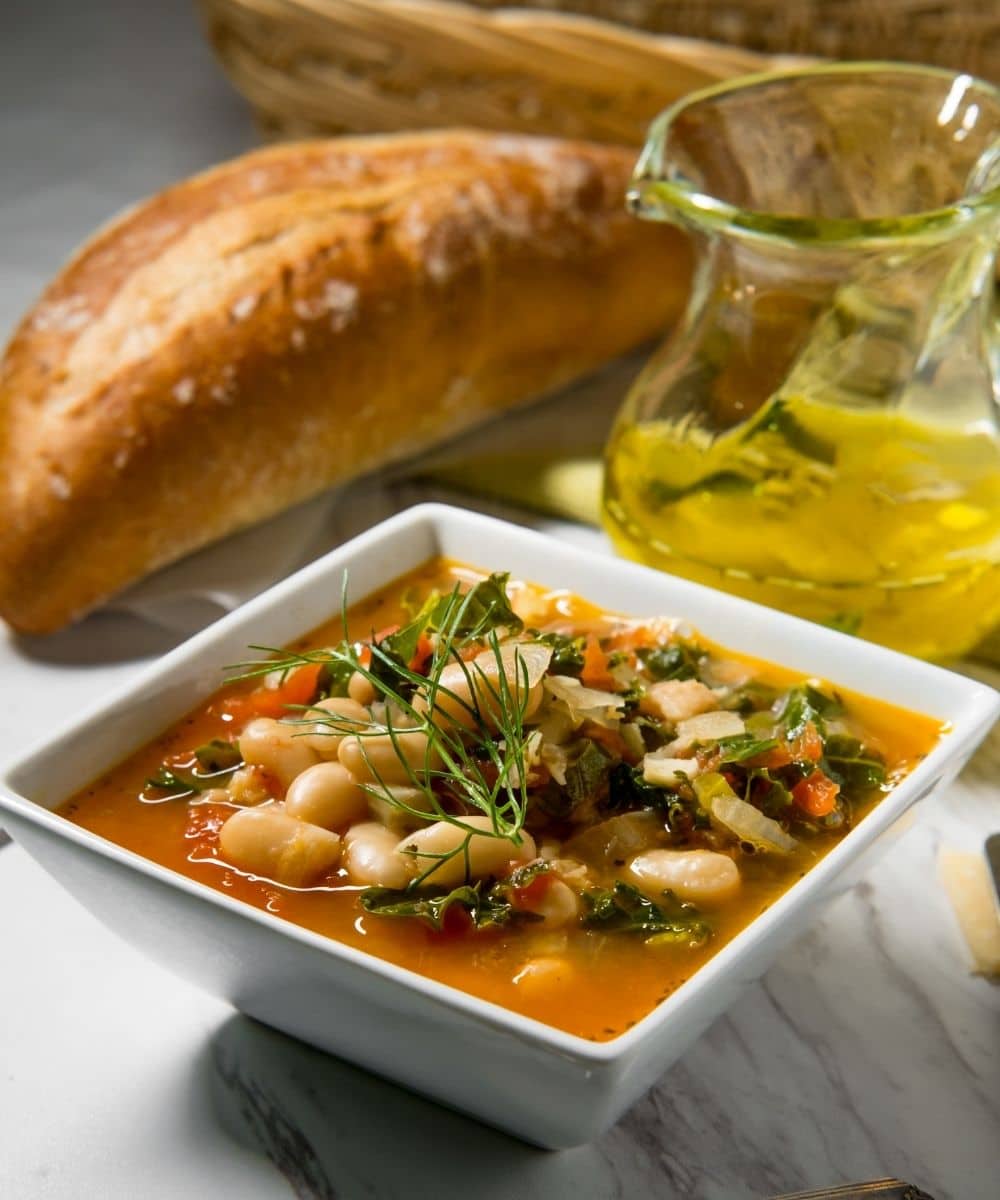 The main ingredients of this recipe are the black cabbage, the savoy cabbage and the cannellini beans. Cut the vegetables into medium-sized pieces, then boil the cannellini beans and then pass them through a sieve with their cooking water, leaving some of them entire. Then make a sauté with onion and oil, subsequently incorporate the red tomatoes and a spoon of concentrate. After a few minutes of cooking over a fire, add the puree of beans and the entire ones, then add the chopped vegetables. To flavor, add salt, pepper and thyme. Leave the mixture to cook for 2 hours and serve the soup on at least 2 slices of toasted bread with garlic. The ribollita is then heated in the oven covered with a superficial layer of thin onion slices.