Epiphany in Italy: 5 unmissable events in 2022

The Befana, the old woman bringing gifts to all children, is celebrated in all Italian cities: let's discover some of them!

The Epiphany is said to be the day taking all holidays away, but this is only part of the story: the Epiphany also brings many parties and lots of fun, especially for children, to whom this holiday is more specifically dedicated than Christmas. Preparations are under way to welcome for 2022 this popular Italian holiday. Below is a selection of the most exciting events for this 6th January 2022!

As always, there are many options in Milan to spend any holiday, and Epiphany is no exception. An idea for an original way to spend January 6 could be going to the Castello Sforzesco in Milan. For example, you can take part in the "Long Journey of the Magi", a sort of game designed especially for children, to make them interact with the works in the Pinacoteca. There will also be "La grande caccia alla Befana" (The Befana Great Hunting), specifically designed for younger children. Another way to have fun (while learning!) could be spending the Epiphany at the Duomo Museum in Milan, where an interactive guided tour will be staged to allow children and their families to learn more about the story of the Magi and their pilgrimage to Bethlehem. The show/guide is entitled "The Way of the Star".

The Befana doesn't exactly meet with a happy fate in Verona, since here the tradition of burning her as a witch is still maintained: in Veronese dialect it is said “Brusar la Vecia”! On the evening of 6 January in Piazza Bra, a puppet made of various materials (branches, bundles, wood shavings, jute) about eight metres high is set on fire to ward off bad luck, a sort of good-luck custom - derived from pre-Roman rituals - at the expense of the poor Befana! Her sacrifice is necessary for the passage from bad to good season, to say goodbye to the old and greet the new. In Verona, Epiphany is not only celebrated through this symbolic burning, since there are also other initiatives to which the citizens are very attached, such as the arrival of the Three Kings under the great comet - to all intents and purposes a parade - and the Befana del Vigile, where charity is given while admiring vintage cars.

For Epiphany, one of the most eagerly awaited events in Florence is the Cavalcade of the Magi, a historical re-enactment taking place in the centre of the city. Since this activity is likely to cause too many people gathered, it has been decided not to hold it in 2022. On the other hand, in Piazza della Repubblica, it will be possible to admire Befanas descending from the arch in the square and from the Rinascente building. It is hoped that next year will be a good year for the resumption of the tradition of the Cavalcade of the Magi, an event with deep ties to Florence (even introduced by the Medici family) that has regained its former glory since the 1990s. The event is inspired by Benozzo Gozzoli's famous cycle of frescoes, 'La Cappella dei Magi'. About 700 participants parade through the streets of the historic centre, starting from Piazza Pitti, until they arrive at the foot of the living nativity scene for the laying of the gifts.

In Bologna, the real protagonist of the Epiphany is art in all its forms, from museum exhibitions to concerts, not to mention the more traditional celebrations linked to this particular holiday. Some of the exhibitions opened during this period are: "The Jurassic Experience" at Spazio Dumbo, "Frida Kahlo - The Experience" at Palazzo Belloni, "Real Bodies Experience" at Palazzo Pallavicini, "Giovanni Boldrini - Lo sguardo nell'anima" (“Look in the soul”) at Palazzo Albergati. For those not willing to give up the classic tour of the Christmas markets, until the Epiphany is still possible going to the Bologna Christmas Fair in Via Altabella. There are also events more specifically dedicated to Epiphany, such as Seguendo la Stella a Dozza (Following the Star in Dozza), consisting of a nativity scene spread over 12 urban locations in the historic village of Dozza and the urban hamlet of Toscanella, which can be freely accessed. 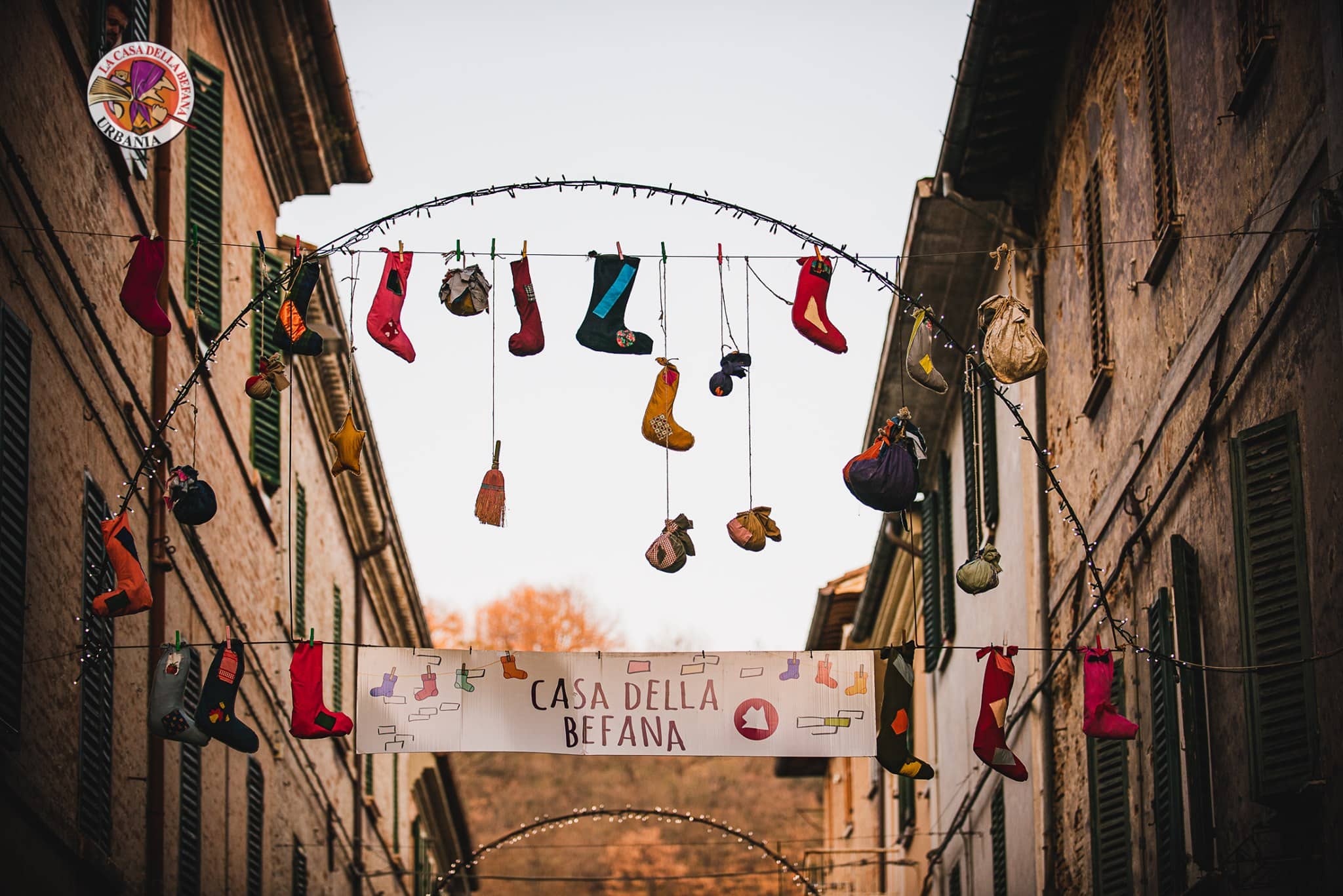 In Urbania, in the Marche region, Epiphany is certainly a much loved festival and one of the most famous in Italy. For many years now, the whole town has been transformed into an enchanted kingdom, with themed decorations and illuminations, thousands of stockings adorning the old town centre, and lots of real Befanas animating the celebration! Since 2016, an authentic Befana House has been set up - created in a renovated space in the town hall - where stories are told and coal is made all year round. And let's not forget the Befana Postal Office, which, as its name suggests, is a real postal service keeping children in touch with the beloved gift-giving granny! The events linked to Epiphany in Urbania are really numerous: traditionally there is the coming down of the Befana herself from both the Bell Tower and the belfry of the Town Hall and the exhibition of authentic handicrafts, such as the longest stocking in the world or the “love scarf”, to wrap all the children around the world. Urbania therefore keeps the tradition alive, and joyfully celebrates this festival for the little ones.

Due to sudden changes in Covid regulations, we recommend that you check the updated programme for each event on the Facebook profiles and official websites.