36 hours in Naples: what to do in a day and a half in Naples

What to see in Naples in 36 hours: the tour is designed to let you experience the city in just one weekend.

Come and discover the charm of the city of Naples. A 36-hour tour through the alleys and the tradition of the city under Vesuvius. A day and a half in the city where you can try, discover and taste the city through its experiences, its treasures and its flavours.

Are you ready to enjoy the beauty of Naples concentrated in a day and a little more? Scroll through this short city guide, and you will discover the city almost to the full. 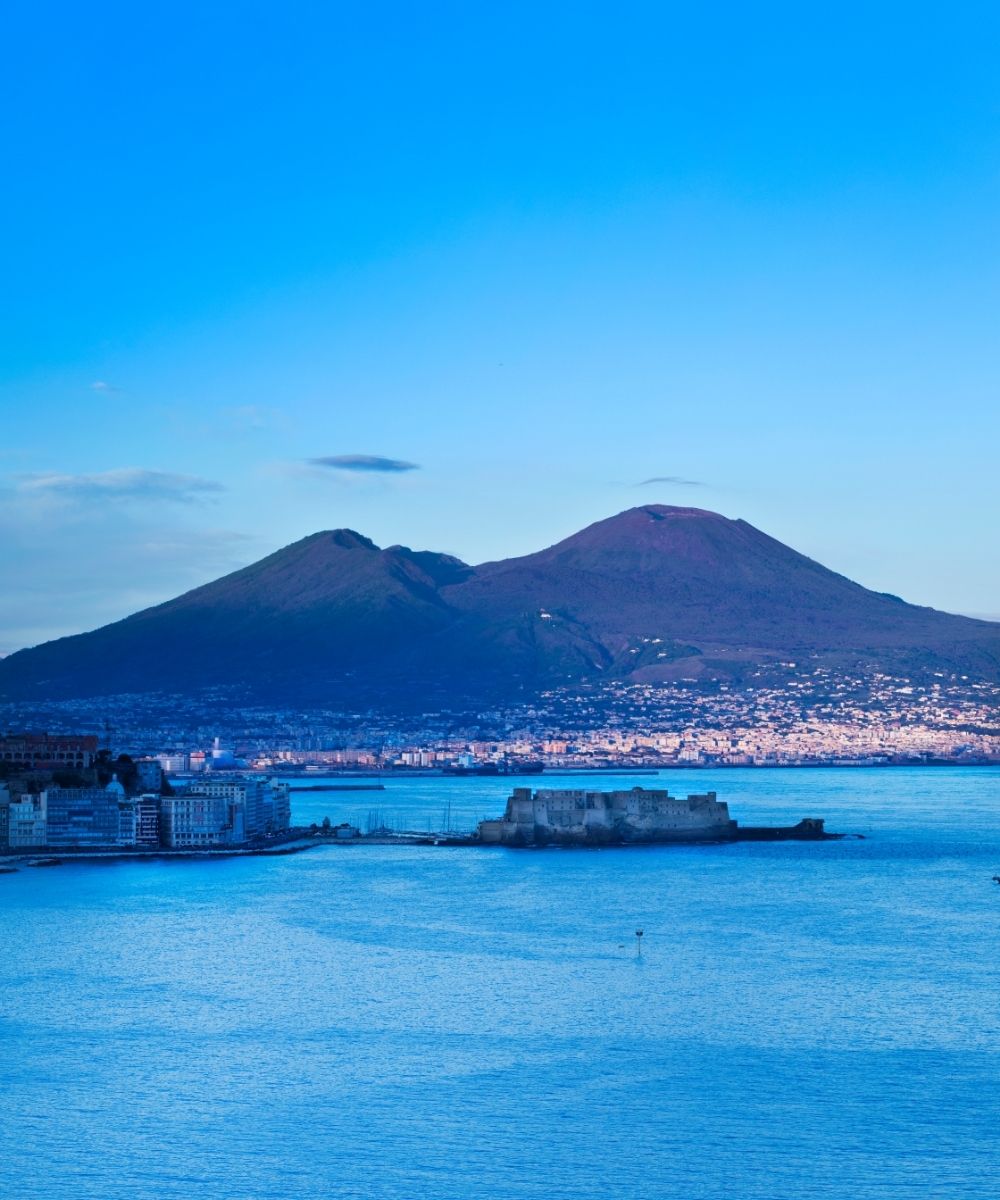 Vesuvius by the sea

On this tour, imagine arriving in Naples in the evening. Once in the city, the first stop is undoubtedly the seafront. This part of the city is the most famous and beautiful in the world, getting there just before or during sunset is one of the most suggestive experiences to try. During golden hour, Naples becomes an amber colour, with the sea reflecting the lights of the sunset and the colours of the city, carved into the tuff, that shine.

Starting from the district of Santa Lucia up to Largo Sermoneta, a long strip of land laps the sea. After a short tour of the seaside village, go up to Castel dell'Ovo, an entire stronghold on the sea that occupies the islet of Megaride, where legend has it that the city was founded.

After having seen Castel dell'Ovo, and having passed the building promenade that includes some of the most beautiful buildings of the Neapolitan nineteenth century, but also the building of the late sixties by the famous architect Filippo Alison, you arrive in Piazza Vittoria, and another step of this tour can start.

Once in Piazza Vittoria, you can stroll in the beautiful Villa Comunale of Naples, a stone's throw from the sea. The villa also houses the Zoological station and the new Museum of the sea that you can visit to learn about a part of the history of Naples.

In the equipped spaces of the villa, you can enjoy an aperitif with friends, or you can move to the Riviera and enjoy the happy hour in one of the areas of the Neapolitan nightlife. In Vico Belledonne, you can enjoy one of the best aperitifs in Naples to the sound of music.

In Naples, the aperitif is very abundant compared to other cities so for dinner we recommend you try one of the delicacies of typical Neapolitan cuisine, the fried cuoppo. The cuoppo is a very absorbent paper straw cone filled with fried foods. Mostly, they are vegetables or fried fish and are real goodness.

The cuoppo is mostly consumed on the street so you can continue to visit the city while enjoying one of its specialities. 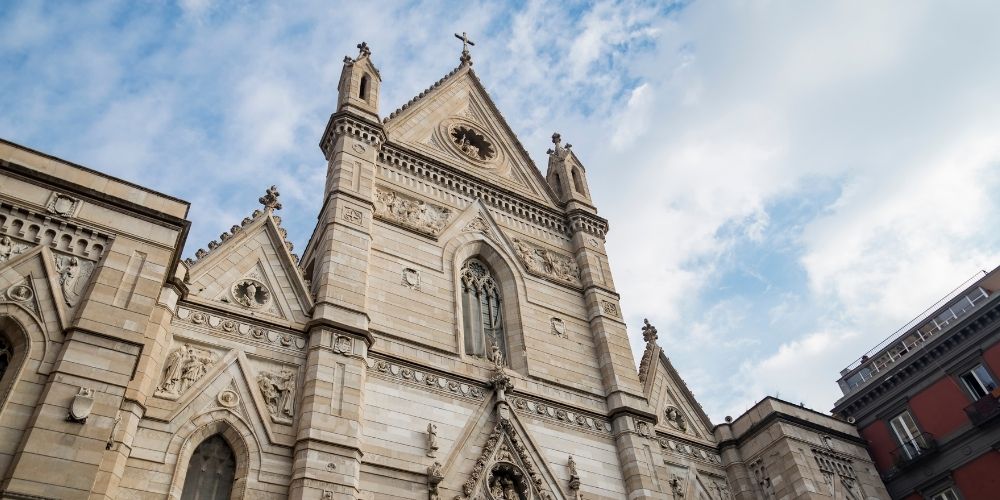 Waking up in Naples with the city sounds in the background is a unique experience. After having breakfast with a Neapolitan coffee, you can start the day by visiting the historic centre of Naples. The visit undoubtedly starts from Spaccanapoli, the road axis that cuts the entire historic centre in half, up to the central station.

A stone's throw from this axis, you can find some of the most beautiful things to see in the historic centre, from San Gregorio Armeno, the street of the cribs, to Piazza del Gesù Nuovo with its obelisk and the monastery of Santa Chiara, passing through the Chapel of San Severo with the Veiled Christ and the noble palaces with their beautiful courtyards, often floral.

Spaccanapoli also takes you to visit the Duomo, the cathedral of Naples. It's a large religious complex composed of several basilicas merged. It hides the crypt of the patron saint of Naples, San Gennaro, with the famous museum of the treasure of San Gennaro.

After a first and quick visit to the historic centre, the tour continues on a stage rich in history. After seeing the city above, this stop takes you to visit the underground city, where some of the city's oldest mysteries and structures are hidden. After the two hours underground, you will look forward to enjoying a good lunch with one of the musts of the Neapolitan culinary tradition: pizza.

Naples pizza is one of the best things to try at least once (although we recommend an encore) both in its traditional and more particular variations. The leavened dough mixed with tomatoes and the ingredients of the Neapolitan land become an experience more than a simple lunch.

One of the places where you can experience this experience is located a stone's throw from the Duomo, near the San Severo Chapel: the Mercato Maggiore. Here, you can try a food and wine adventure that drops you into the culture and history of the real Naples told not only through the excellent pizza but also traditional Neapolitan dishes such as Genovese, pasta and potatoes or the famous Scarpariello.

4. Historic centre again: the subway stations of art and the Maschio Angioino - 4:00 pm

After having tried the goodness of Neapolitan cuisine at the Mercato Maggiore, you can take a stroll and proceed with the tour of the historic centre. Go to Piazza Dante and take the metro line, which takes you to visit the art stations. The most beautiful in Europe is located in Naples and is a single stop from the Piazza Dante station: the Toledo station. The station, built by architect Oscar Tusquets, was nominated by the Daily Telegraph and CNN as the most beautiful in Europe and the world.

The station is made up of a continuous mosaic: it shows scenes from the history of Naples and its relationship with the sea and the sky through the telescopes. From Toledo, you can easily reach the Municipio station, designed by Alvaro Siza and Eduardo Souto de Moura, another beautiful station. As soon as you leave the station, your attention will be captured by the Maschio Angioino, one of the best-preserved castles in Italy.

After seeing the Castel Nuovo, you can go to Piazza del Plebiscito, with the San Carlo Theater and the Royal Palace in the background and the Umberto I Gallery as a counterpoint.

Once the tour of the historic centre is over you can finally have dinner and, as you could have guessed, in Naples you are spoiled for choice. You can undoubtedly dine on one of the previous recipes or try another speciality such as fried pizza. Whatever you choose it is important to finish with a flourish and how not to do it with one of the traditional Neapolitan sweets. The babà, the sfogliatella and the pastiera are just some of the desserts that you can enjoy at the end of the day.

2. Breakfast in the Capodimonte wood and visit to the Royal Palace - 09.00 am

The last day in Naples opens in the name of greenery and culture. After having breakfast, you can visit the Capodimonte wood. An immense green oasis on the edge of the city fabric was once a royal garden with even the Royal Palace inside, the current Capodimonte Museum. The Museum collects some of the most beautiful works of all Italian history from Raffaello to Michelangelo, passing through Parmigianino, Goya, Pinturicchio, Vasari, Tiziano and Andy Warhol. Before leaving Naples, you cannot fail to take advantage of its shopping streets. From Capodimonte you can easily return by bus to Piazza Dante, a strategic point to reach all the most fashionable streets of Naples. Via Toledo is one of these streets, a very long promenade full of shops of any kind. From via Toledo you can also easily reach via Chiaia and the famous luxury streets via dei Mille, via Calabritto and Filangieri, or go up to Vomero and visit via Scarlatti and via Giordano.

These are just some of the most beautiful attractions and experiences you can do in Naples in 36 hours. They are super concentrated experiences, and we know very well that they would certainly deserve a much more in-depth visit, which goes beyond a tour of a day and a half.

Now that you've got a clear idea of your mini-tour in Naples, all you have to do is pack up and go! Don't forget to book your Naples Pass, a tool that allows you to make the most of your experience in the city, avoiding any stress and with no risk of missing anything.

Find out more about Naples Pass❯