Italy, a Nation of great culture and history. A proper time machine to know great civilizations from the past. Discovering and visiting places and sights and among them, it is always hard to choose. In the article, 10 of the most famous must-see sights that you must go to in Italy.

Boboli Gardens are a lush sculpture park with views of the Tuscan countryside, extended across 45 acres. It was a gift from Cosimo I de' Medici to his wife, Eleonora di Toledo.

Boboli Gardens are behind the Pitti Palace. It is an extravagant mix of nature, architecture, sculpture and various museums. A trip here is a journey deep into the heart of Renaissance perfection.

An orderly architecture, rich in elegant decorations and ancient structures, both authentic and reproduced, into a magnificent natural setting. This garden was one of the first landscape projects to define the Renaissance ideal of natural beauty.

The influence of ancient culture can be seen through the gardens, from Neptune's Fountain to the Fountain of the Ocean by Giambologna to Giorgio Vasari's Large Grotto. And also, the Egyptian obelisk from the 13th century BC. 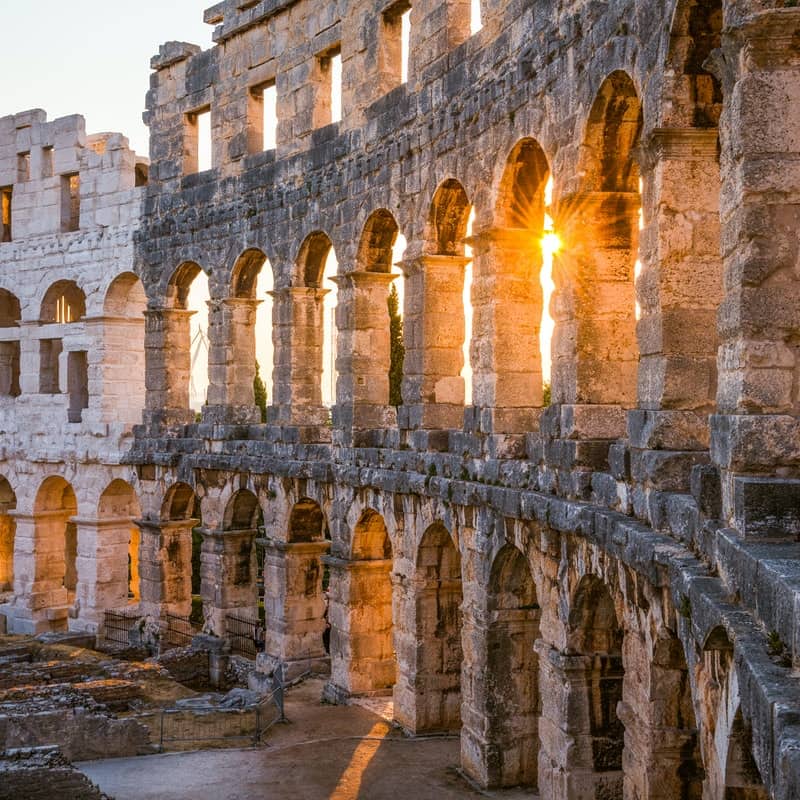 Colosseum, also known as Ampitheatrum Flavium, because built during the Flavian dynasty. It was the "games" theatre, where the ancient Romans went to see the gladiators battles.

The name Colosseum is because in the arena raised a 30-meters-tall bronze statue on Emperor Nerone, inspired by the Colossus of Rhodes.

When the Colosseum was used anymore as an arena, the citizens of Rome founded new original ways to use it. For example, from the late 9th century to the 14th century, they used it as a castle town: inside, poor houses, workshops, and stables.

It is the largest amphitheatre in the world and also one of the oldest to stand up straight. Indeed, it is 2,000 years old. During these years, it had to fight against damage because of natural causes and opportunistic constructors. But through it all, it is still there, resilient and with inextinguishable fame. 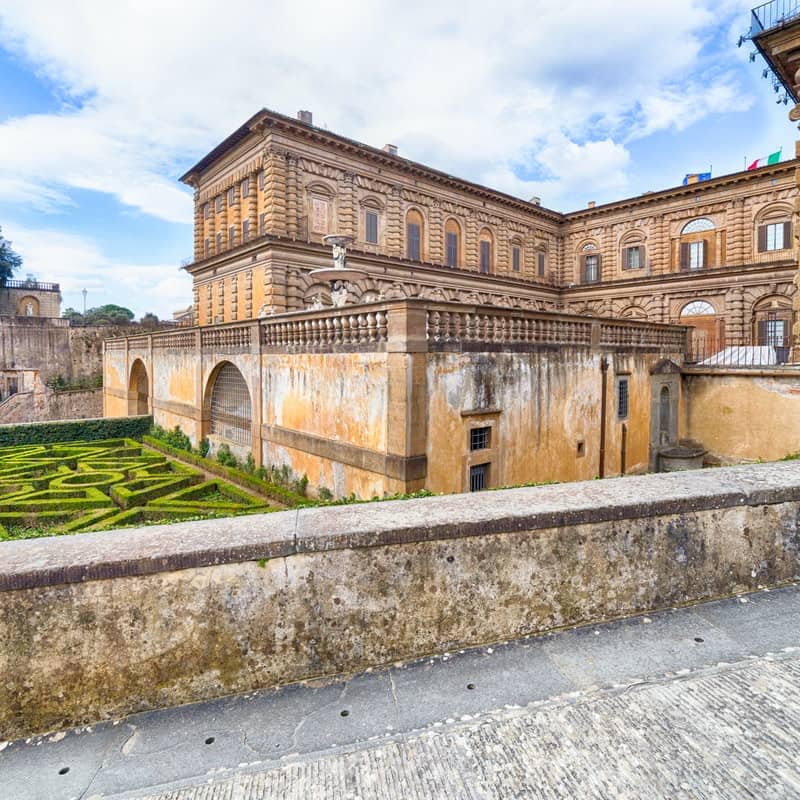 Palazzo Pitti is a must-see in Florence. Once home to the Grand Dukes of Tuscany, Holy Roman Emperor Francis I, Napoleon, and King Victor Emmanuel II. It is not only the largest royal palace in the city also the largest museum complex (32,000 square meters). The Palatine Gallery has works by Raphael, Titian, Rubens, and more.

Palazzo Pitti has come a long way since its original incarnation as the residence of ambitious banker Luca Pitti. Lavish touches adorn stunning architecture at this massive Renaissance palace on the banks of the Arno. Once inside the palace, beautiful royal apartments and you'll see an eclectic mix of luxurious memorabilia, including furniture, paintings, and fine sculpture.

The Palatine Gallery melds four centuries of high-style Tuscan living with Renaissance and Baroque paintings. The Palatine Gallery isn't organized chronologically, nor by the school of painting. Instead, the arrangement reflects the tastes of the former residents.

A visit to the Palazzo Pitti and Palatine Gallery will give you a sense of the everyday opulence of the aristocratic families who called the shots during the Renaissance. 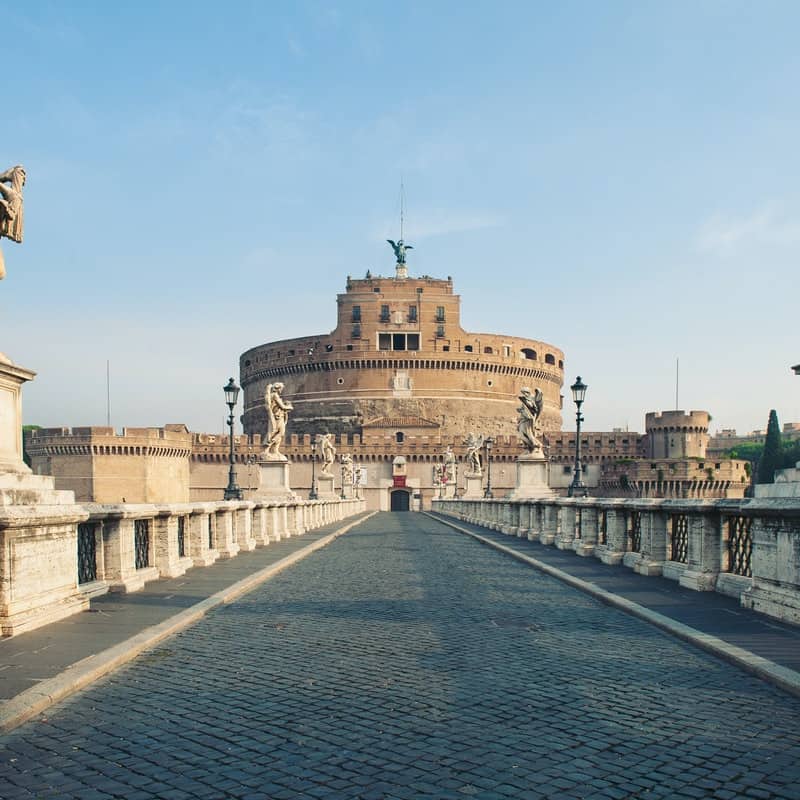 On the banks of the Tiber stands a towering cylindrical structure steeped in history – it is a mausoleum, a monument, and a museum. Castel Sant'Angelo is a step back into the drama of Rome's history. Plus, get beautiful rooftop views of the Eternal City!

Once, it housed the remains of Emperors, from Hadrian to Caracalla. It is now one of Rome's top attractions. As well as a mausoleum, it's also been a palace, a fortress, a prison, and the dramatic setting for Puccini's opera Tosca.

The downstairs is cold and cramped, but the upper floors are a whole different story. Inside, the Museo Nazionale di Castel Sant'Angelo with its collection of art and military memorabilia. A trip to Florence's renowned Uffizi Gallery is much like revisiting the Renaissance. There are works by Raphael, Michelangelo, Dürer, Rembrandt, Titian and eight new rooms dedicated to Caravaggio.

It starts with earlier Byzantine artists, like Cimabue, continues through exemplars like Da Vinci and Raphael, and builds towards the Baroque movement with masterpieces by Michelangelo, Caravaggio, and more.

The globally famous highlights at the Uffizi are Birth of Venus and Primavera by Botticelli. Other coveted works include Leonardo da Vinci's incomplete but riveting Adoration of the Magi, Michelangelo's Doni Tondo, and Raphael's intimate portrait of two Medici men, Pope Leo X and his cousin who would become Pope Clement VII. 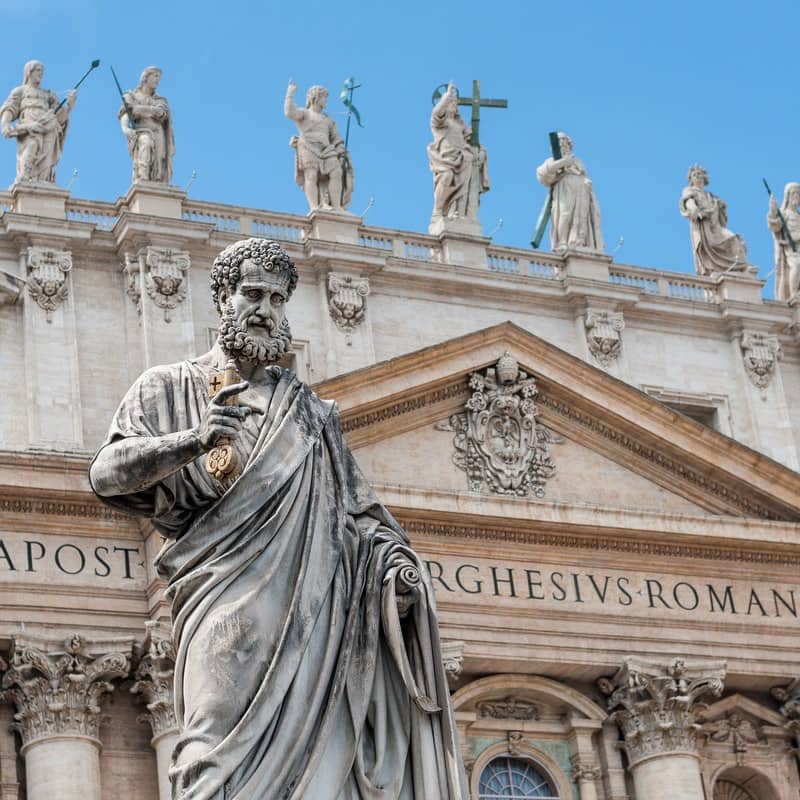 St. Peter's Basilica is one of Rome's most important religious buildings. Prepare for your jaw to drop when you step inside the basilica. Not only is this temple of Christendom a religious landmark, but it's also more or less a piece of art.

Study outstanding Renaissance architecture and witness art by Donato Bramante, Carlo Maderno, Gian Lorenzo Bernini and more. Inside, the Chair of Saint Peter: the legend says it was the chair of the first pope, St. Peter. One of the world’s iconic archaeological sites. Pompeii and the ruins of a city destroyed 2,000 years ago by a violent Vesuvius eruption in 79 AC. It was truly cataclysmic – it wiped out the entire populations of nearby towns – but it also yielded to history one of the most extensive and intact ruins of an ancient city. The spectacular ruins are one of Italy’s most visited sites.

When Vesuvius erupted with the force of 100,000 atom bombs, life in Pompeii perished in an instant. Ironically, the blanket of superheated ash combined with the lack of moisture to preserve much of the city for thousands of years.

What you see today lends an extraordinary window into everyday life in Roman times. With over 50 hectares to explore with Vesuvius in the background. The uniqueness of the ruins are hundreds of haunting plaster casts of lava-fried locals. 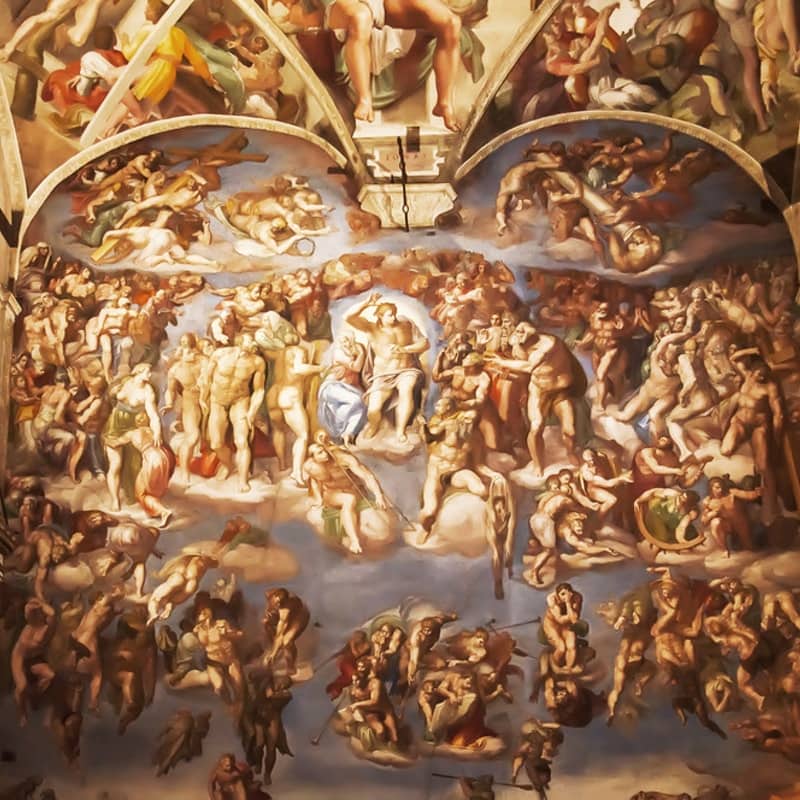 Michelangelo's work in the Sistine Chapel is widely regarded as some of the best artwork ever created. Vatican Museums are full of works amassed by the popes over centuries – with paintings, sculptures, tapestries, and more. There are four collections, where you will see classical sculpture, Renaissance masterpieces, and stunning artefacts from Ancient Egypt and the Etruscans.

In Sistina Chapel, Michelangelo created more than 300 figures on over 500 square meters of the ceiling in his breathtaking fresco. Twenty-two years later, he returned to paint The Last Judgement on the entire wall above the altar.

2. The Leaning Tower of Pisa 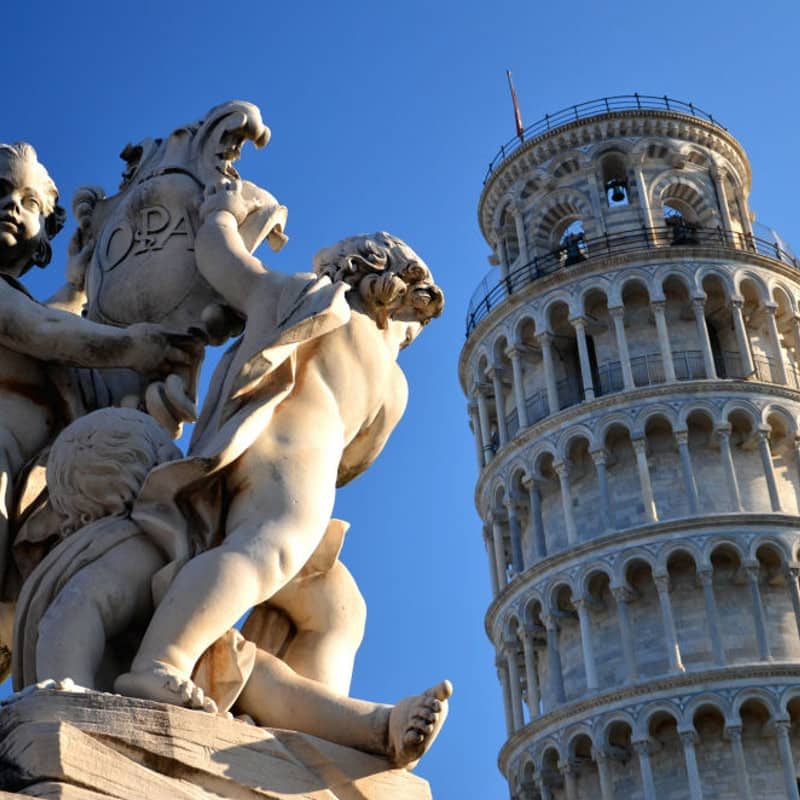 The world-famous Leaning Tower of Pisa is in Piazza Dei Miracoli. Actually, it is the bell tower for the nearby Cattedrale Metropolitana Primaziale di Santa Maria Assunta. Make the most out of your visit to Piazza Dei Miracoli by seeing both!

Given its history, it's no surprise that this place is called the Piazza Dei Miracoli (that means Square of Miracles). The continuing existence of Leaning Tower is indeed miraculous: from a famously poor foundation (that caused the leaning) to the Nazis using it as a lookout.

Unmissable the 'Look at me, I'm holding up the tower!' picture. But even more inevitable, to ascend the tilted campanile. From its top, you'll get fabulous views and maybe even hear its seven bells ringing – one for each musical note. 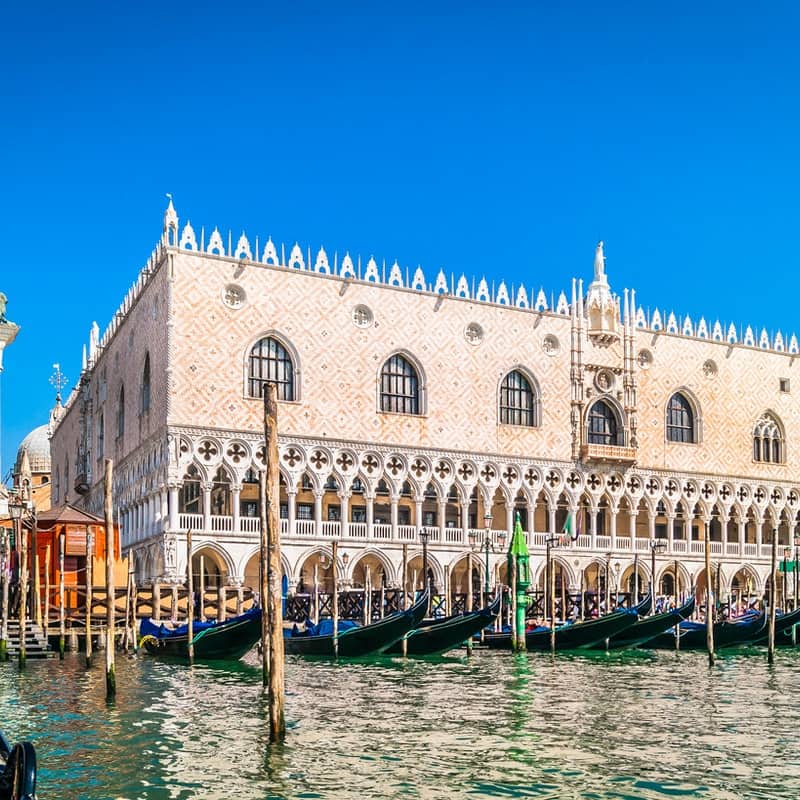 Venice itself is an attraction, but its Doge's Palace is where you will breathe the splendour of the Venetian Republic and learn the fascinating history of Venice's once-all-powerful Doges.

The first Doge's Palace was built on this spot in the 9th century but destroyed in a fire. The present Gothic palace dates back to the 14th century (with many renovations and refurbishments done along the way).

To enter the Doge's Palace is to travel back in time and uncover the history and culture of the City of Masks. Inside, you'll find awesomely ornate rooms decorated by artists such as Titian, Veronese, Tiepolo, and Tintoretto.

You will see the 15th-century Golden Staircase (Scala d'Oro), which once was an impressive entrance for visiting dignitaries. Another highlight is walking the notorious Bridge of Sighs – so named for the laments of the convicted criminals as they made their way to the New Prisons.