The Vatican Museums: ten works not to be missed

A visit to the Vatican Museums represents an authentic immersion in the history of art and culture of half the planet. In fact, the Vatican Museums hold thousands of works and finds ranging from Egyptian to Etruscan art, from classical to contemporary art, passing through the masterpieces and great masters of the modern age. To help you in this unrepeatable human experience, we have prepared a list of 10 unmissable works that will guide you in this extraordinary adventure in space and time. Have a good trip!

1 - The Stele of Hatshepsut and Thutmosi III: a trip to Ancient Egypt

Your tour in the Vatican Museums begins with a precious Egyptian masterpiece of art preserved in the Gregorian Egyptian Museum. It is a commemorative stele from Thebes made of sandstone during the XVIII dynasty (1473-1458 BC), the so-called Stele of Hatshepsut and Thutmosi III. Hatshepsut was the daughter of Thutmosi I and the consort of Thutmosi II: at the death of the latter, the queen assumed command of the kingdom as a co-agent of her grandson-stepson Thutmosi III. Hatshepsut later claimed absolute power over the kingdom of Egypt ruling it for 22 years. Upon his death, his nephew took over the government in his place, and promoted a harsh campaign of damnatio memoriae against his aunt-tutor, erasing his image from all the works of art in the country. The work in question, which represents aunt and nephew in the act of offering gifts to the god Amon Ra, is certainly to be placed in the period of co-generosity, when the relationship between the two was still peaceful and peaceful.

2 - The Sarcophagus called del Poeta: a dip in ancient Etruria

The fascinating exploration of the Vatican Museums is also an opportunity to appreciate the little-known masterpieces of Etruscan art. An example of this is the splendid Sarcophagus known as the Poet preserved in the Gregorian Etruscan Museum, a work from Tarquinia and built around 300 BC. c. The sarcophagus is the testimony of the use of the sarcophagus placed in chamber tombs in the southern Etruscan cities of the Hellenistic period. The work presents contaminations of typically Etruscan motifs such as funerary genes, with those of Hellenistic origin such as the mythological decorations taken from the Theban saga. The lid, which represents the decumbent deceased with a typical volumen in his hand, an attribute of his activity as a poet, comes from another burial.

3 - The Laocoon: a masterpiece of classical sculpture 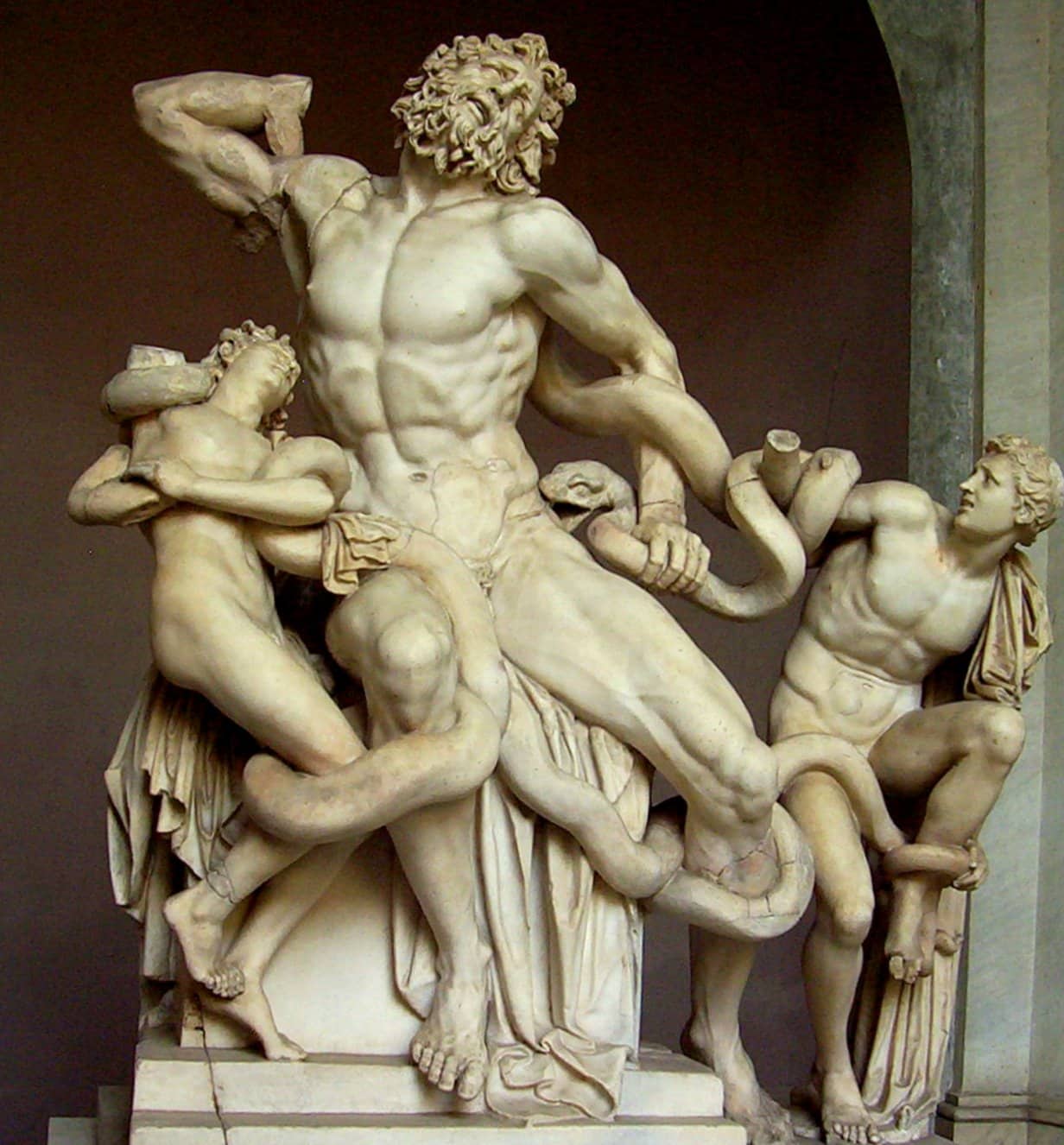 One of the unmissable works of your tour of the Vatican Museums is certainly the statuary group of Laocoonte, one of the most famous masterpieces of the classical world, preserved in the Cortile Ottagono. The work was found in 1506 on the Esquiline hill, arousing great interest and clamor also in the young Michelangelo and in his patron, Pope Julius II, who immediately decided to buy the sculpture. From the time the marble group was identified with the masterpiece carved by the three Rhodesian copyists Agesandros, Athanodoros and Polydoros in the first century. to. c. and so loved by Pliny, who made it an accurate ekphrasis. The group represents, with all the strength and vigor of the Hellenistic baroque, a famous anecdote of Homer's Iliad: Laocoon, Trojan priest of the god Apollo, was the only one to oppose the notorious entrance of the infamous Trojan horse into the city. For this Athena and Poseidon punished him together with his children, sending him two terrible sea snakes.

Among the masterpieces of the rich collection of the Vatican Pinacoteca, the famous Stefaneschi Triptych by Giotto and workshop between 1315 and 1320 is certainly not to be missed. The work was commissioned by Cardinal Jacopo Caetani degli Stefaneschi for the ancient basilica of S. Pietro and it was painted on both sides, to be admired by both the faithful and the members of the clergy. On the side facing the clergy, Christ enthroned with Angels and the client, the Crucifixion of St. Peter and the Martyrdom of St. Paul, are represented in the predella The Madonna and Child with the Twelve Apostles. On the side facing the faithful, on the other hand, St. Peter enthroned with Cardinal Stefaneschi, Pope Celestine I and the Saints are depicted. Giacomo, Paolo, Giovanni Evangelista and Andrea and a fragment of predella with three saints.

5 - The Sistine Chapel: the apotheosis of Christian art The main stop on your tour of the Vatican Museums is obviously the Sistine Chapel, the mecca of World Art. Its history began under the pontificate of Pope Sixtus IV della Rovere (1471-1484) who decided in those years to restructure the ancient Magna Chapel. The Stories of the Old and New Testaments placed along the side walls, made by a team of Tuscan artists, "the pupils of Lorenzo the Magnificent", such as Sandro Botticelli, Cosimo Rosselli, Pietro Perugino, date back to those times. Il Ghirlandaio, etc ... The famous vault built by Michelangelo between 1508 and 1512, with Stories of Genesis, Sibyls, Prophets and lunettes with Stories of the Ancestors, is due to the commission of Pope Julius II della Rovere. An authentic figurative Bible, which connecting to the iconographic cycle of the side walls, finds its correct conclusion in the Last Judgment of the wall of the high altar, still made by Michelangelo between 1533 and 1541 on commission of Clement VII Medici. It must be remembered that the Conclave for the election of the pope still takes place between these magnificent walls.

6 - The Stanze di Raffaello: the triumph of Christian Humanism 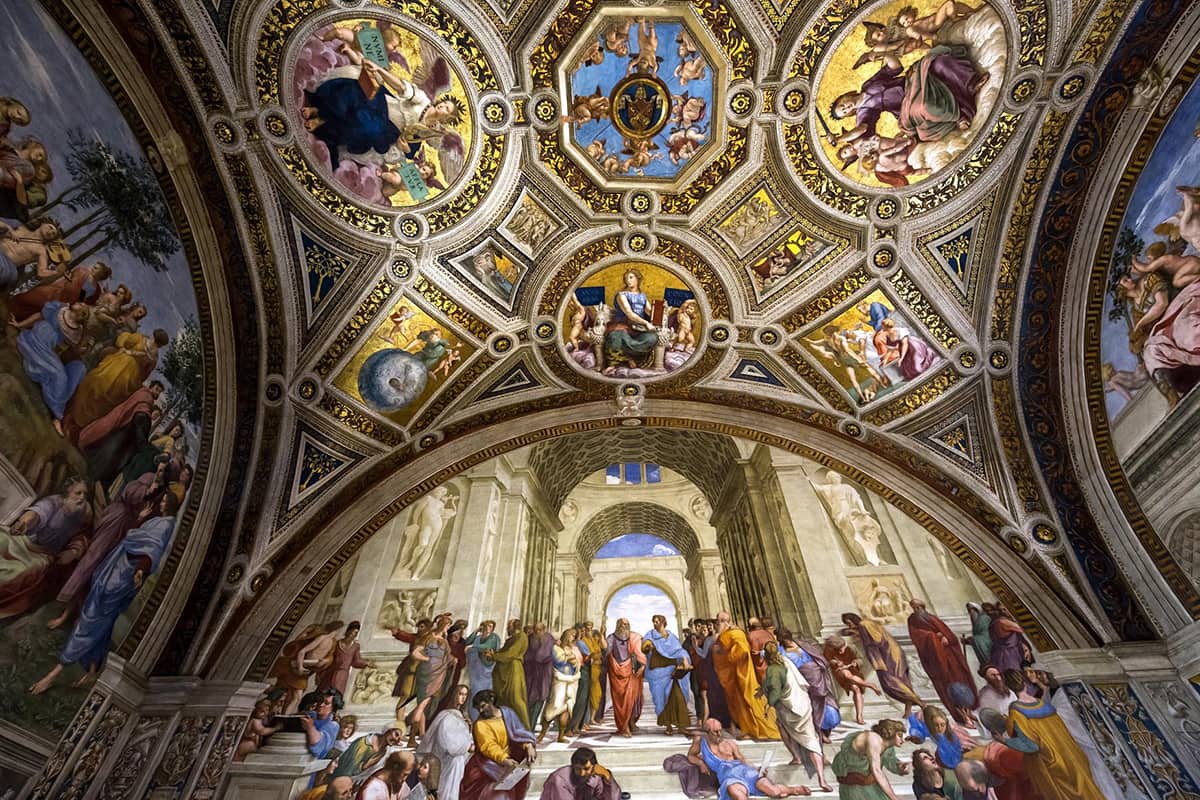 After Michelangelo's Sistine Chapel, it is right to pay homage to the other great Renaissance architect, Raphael. It was precisely to the young man from Urbino, in fact, that Julius II wanted to entrust the work for his private rooms, since then called Stanze di Raffaello. A work started in 1508 and then completed by the master's pupils after his death in 1520. There are four rooms, each decorated with a specific iconographic program aimed at enhancing the union between classical-humanistic and Christian culture: Room of the Segnatura, The Room of Heliodorus, The Room of the Borgo Fire and the Room of Constantine. Among the various frescoes painted by Sanzio, pay your attention in particular to the School of Athens, in the Stanza della Segnatura, where Plato and Aristotle still today indicate to humanity the path of truth and wisdom

After Michelangelo and Raphael, the other protagonist of the triad of the mature Renaissance, Leonardo da Vinci, present in the collection of the Vatican Pinacoteca with the enigmatic S. Girolamo made around 1482 could certainly not be missing. The work, whose genesis is still shrouded in mystery, it has a daring story behind it. In fact, it appeared for the first time in the early 19th century in the will of the Swiss painter Angelica Kauffmann. Then it was purchased by Cardinal Joseph Fesch, Napoleon's uncle, who would have even found it divided into two parts, a legend that would be confirmed by the actual division of the painting into 5 parts. Then, after being auctioned numerous times, it was definitively purchased by Pope Pius IX for the Museums in 1856.

8 - The Deposition of Caravaggio: a new vision of Nature and Religion

The next stop on this exciting adventure at the Vatican Museums is one of the most famous masterpieces of the great Caravaggio. We refer to the Deposition made by Merisi between 1600 and 1604 for the chapel of Girolamo Vittrice in the church of Santa Maria in Vallicella in Rome. An iconographic solution as usual innovative, that of the Lombard painter, who chose to represent the tragic moment in which John and Nicodemus place the body of Christ on the tombstone of his tomb. The pinnacle of Caravaggesque naturalism, the work is one of the many masterpieces made by Merisi in Capitoline City, before his death sentence for murder.

9 - The Martyrdom of St. Erasmus by Nicola Poussin: a masterpiece of Baroque painting

In the top ten of the Vatican Museums, there must be absolutely the Martyrdom of St. Erasmus made by the French painter Nicolas Poussin between 1628 and 1629 for the altar of the right transept of St. Peter's Basilica and today replaced on the spot by an eighteenth-century copy in mosaic. The work represents the atrocious martyrdom suffered by Erasmus, Bishop of Formia, during the diocletian persecutions of 303 AD. A painting where horror, classical architecture and Christian spirit are expertly calibrated, and which will become the prototype for many subsequent works of similar subject.

10 - The Vatican Pietà: the pictorial testament of Vincent Van Gogh

Your adventurous journey through the history of art ends in the presence of one of the greatest creative geniuses of modernity: Vincent Van Gogh. In fact, as not many remember, the Pinacoteca Vaticana preserves, as if its infinite masterpieces were not enough, even a moving Pietà made by the Dutch artist in 1890, just before his tragic death. A rare example of religious art by the great Vincent who was inspired by a lithography of Delacroix's Pietà for its composition. The work, which was dedicated by the artist to his beloved sister Williemen, closes the curtain on the painter's life, and on your visit to the Vatican Museums.