Milan is a colourful open-air museum: without inside of course, but with thousands of walls housing Italy's most avant-garde street artworks. From the city centre to the outskirts, graffiti art creates unforgettable urban itineraries.

Following the footsteps of other international metropolises such as New York, Berlin, Buenos Aires, Melbourne and Taipei, Milan has transformed its grey walls into an explosion of art and splendour. Life in a big city can be hectic and alienating, but thanks to the work of many Italian and international street artists, we can all feel a little less lonely and take comfort thanks to this incredible beauty.

Let's discover some of the most exciting works, starting from the cosmopolitan city centre and moving to the abandoned suburbs and finally finding a real graffiti castle.

Beauty will save the world 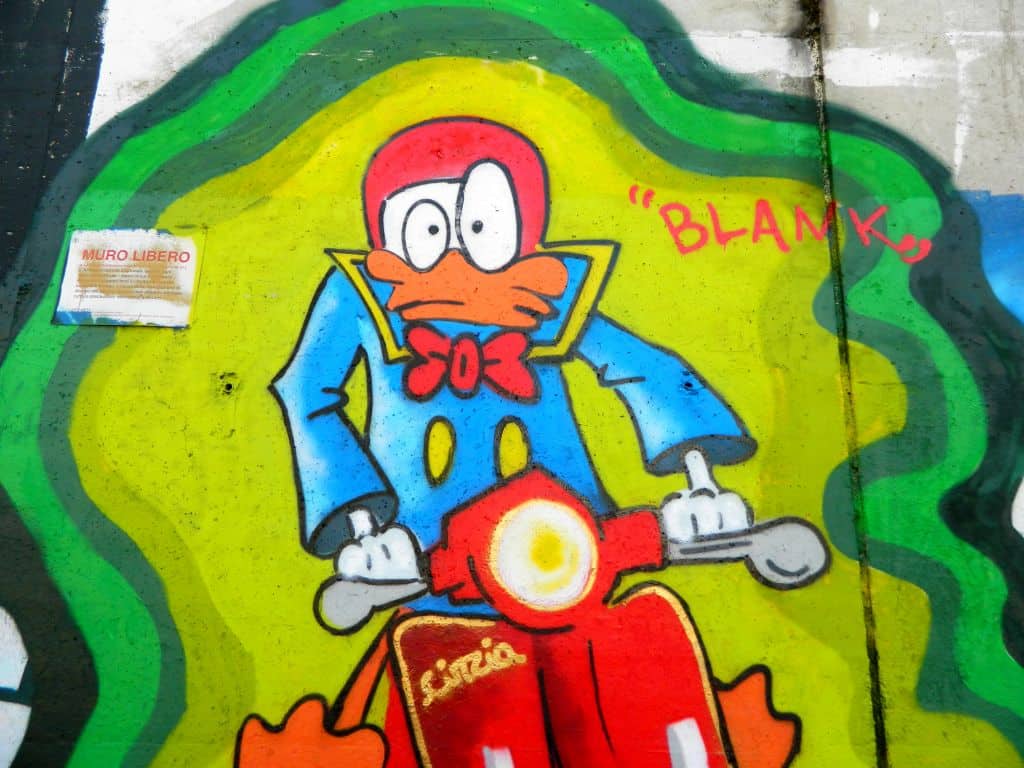 We begin our virtual tour from Ortica, an urban area in the east of the city that has retained a strong neighbourhood identity over the years, with its small church, retail traders and bucolic past. After World War II, this identity was affected by the strong industrial growth that led to the establishment of several factories and manufacturing plants that changed the face of the neighbourhood.

Against the greyness and anonymity, heroic street art champions rose and created the Or. Me (Ortica Memoria) project, a dream of over twenty murals that tells the history of the district and brings colour into the lives of its inhabitants. The graffiti covers a wide range of themes, and they are appreciated by the residents, who have made a point of boasting about it.

One signature is that of Blank, a young woman who has created no less than 15 works around Milan and, in particular, in Ortica has made the purple Octopus and Donald Duck on a Vespa.

Leoncavallo is the Sistine Chapel of the contemporary world

The Greco district and the iconic sites of the Milanese movement: Leoncavallo and surroundings 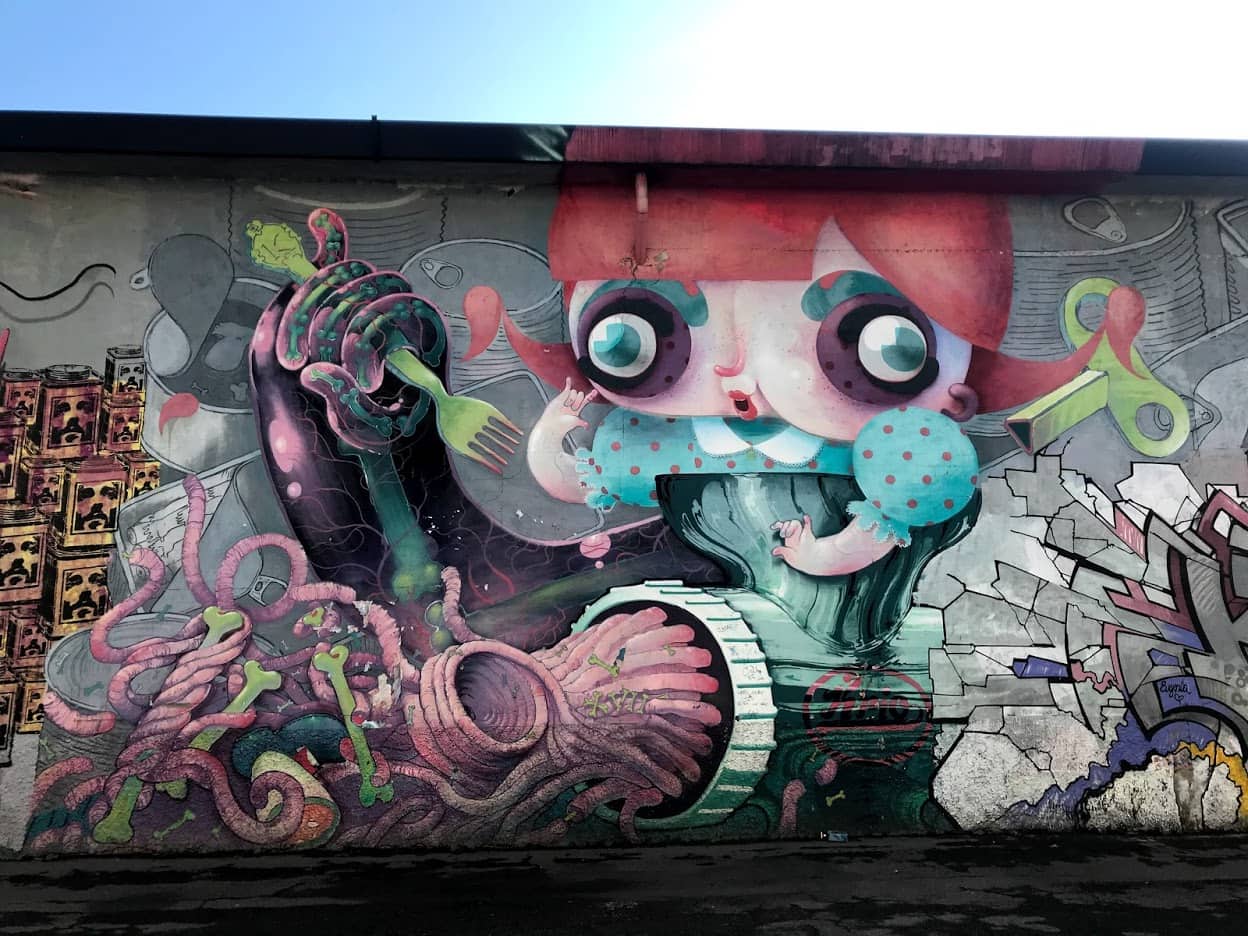 The Greco district is in the north of Milan: you can enjoy one of the city's most underground and historic tours among these streets. Milan's graffiti movement reached its peak with the murals of the busy Leoncavallo Self-managed social centre, founded in 1975, which houses veritable works of wall art of great value, both within its walls and in the neighbouring streets, such as Via Watteau).

Close to Leoncavallo, you will find Martesana Park, where the famous penguin will greet you by the artist Pao. A short walk from here, you will come across the NoLo district, whose main street, Via Pontano, is an authentic Milanese-style 'east side gallery': the murals are numbered like works of art in a museum! Here you can admire works such as The Businessman, Are Your Happy? Zero Like and Undrinkable Rain

Other routes through antagonistic murals and international graffiti artists 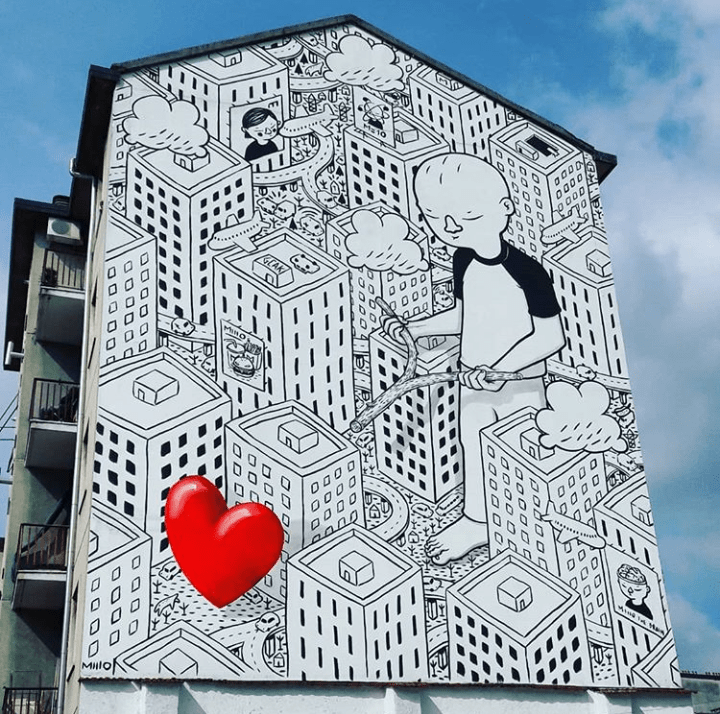 Let's take a quick look at some other treasures hidden in the streets of Milan's central districts before moving on to the city's suburbs.

The streets near the city's railway stations are always full of surprises: artist Blu has given to the busy Lambrate station a mega mural depicting bicycles crushing cars, calling for a reorganisation of city traffic.

In the Forlanini area, at the underground railway station, the walls host a beautiful mural dedicated to Enzo Jannacci entitled "El purtava i scarp del tennis" (he wore tennis shoes ) and one dedicated to trains, a metaphor for the human being in perpetual movement.

The Isola district and the Porta Garibaldi station area, once overrun by decay and poorly frequented, are now one of the most beautiful areas of Milan, thanks to a unique urban redevelopment project.

The fantastic graffiti and wall paintings that populate the district's walls have contributed to this achievement.

The Niguarda district is home to a vast anti-fascist mural recalling the contribution of the inhabitants of the area during the struggle for the liberation of Milan: in particular, it pays homage to some of its fallen soldiers such as Gina Galeotti Bianchi, nicknamed Lia, a partisan killed by the fascists a few steps from the area where the mural now stands.

Street artist Milo has revolutionised the façade of two buildings in the Porta Vittoria area as part of the "Garden of Cultures" project, creating two black and white masterpieces with two mighty red hearts.

Milan honours its fellow citizens who have distinguished themselves in the essential artistic fields by creating a massive mural on the wall of the Visitation Convent in the Crocetta area: among others, here you can look into the eyes of Iannacci, Gaber, Franca Rame, Mariangela Melato, Alda Merini and Gadda 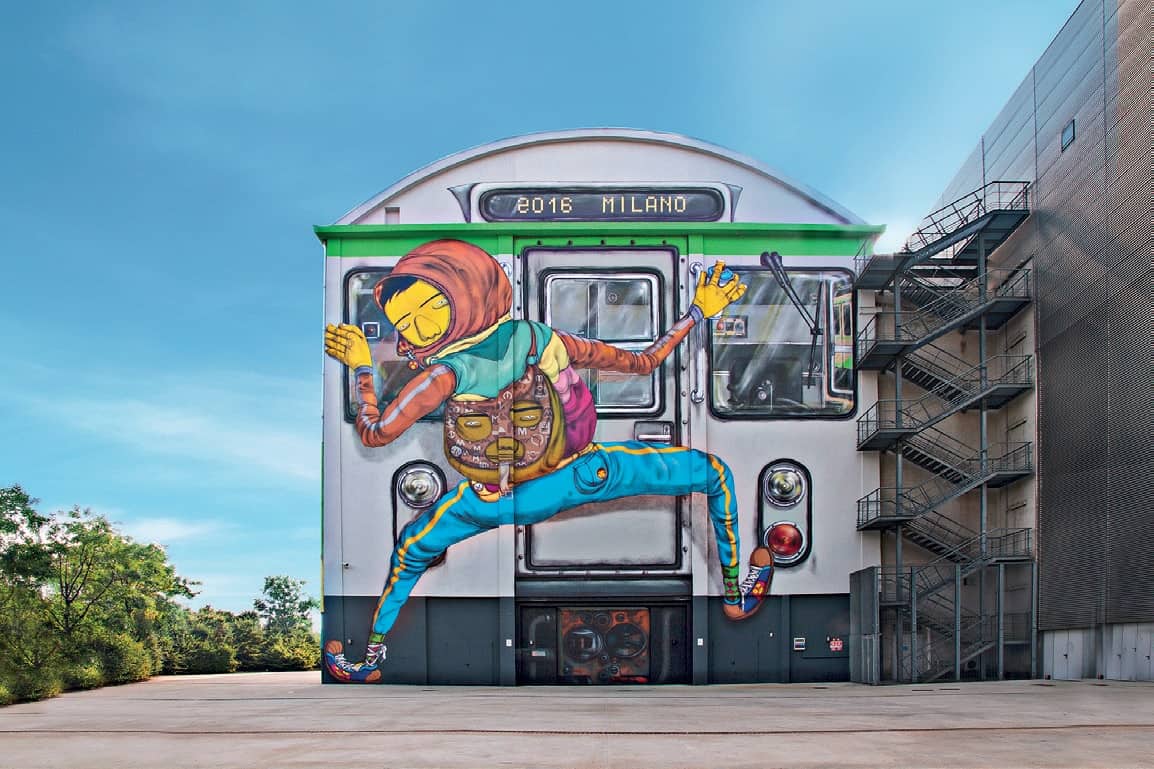 The MAUA project deserves a special mention: in addition to Milan, it also involves Turin and Palermo. MAUA is an open-air museum whose artworks are recommended by the district inhabitants: we are talking about a new model of the museum, more participatory and widespread, in which the inhabitants are called upon to work together to enhance their environment.

Once you are in front of the mural, you can frame the work of art through the Bepart App and let yourself be surprised by the effects of augmented reality.

The ones who really scar our neighbourhoods are the companies who scribble giant slogans on the facades of buildings and the sides of buses, trying to make us feel inadequate if we don't buy their stuff.

Urban street art in the abandoned industrial areas around Milan 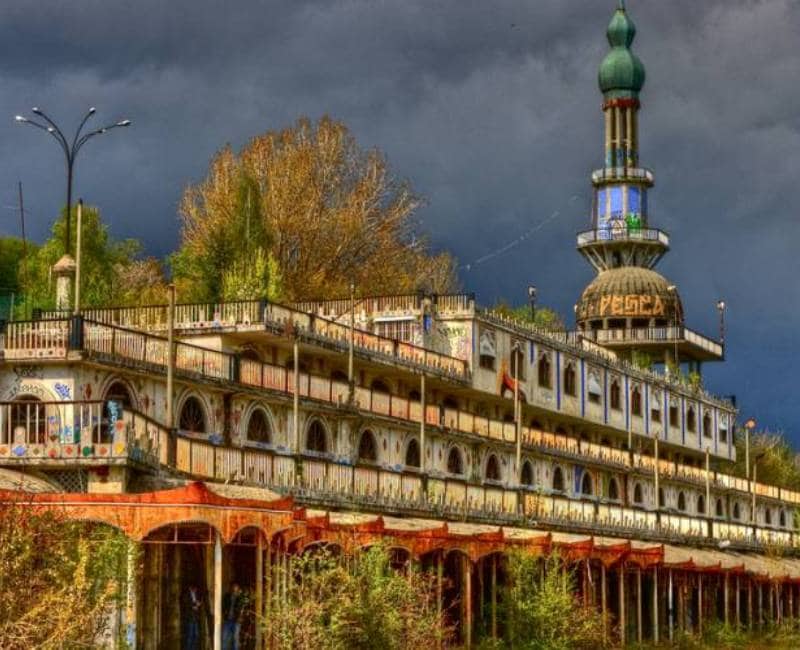 The metropolitan city of Milan encompasses not only the central areas but also a series of peripheral towns close to each other, creating an urban agglomeration of impressive dimensions.

Because of its industrial vocation born after the war, the outskirts of Milan are home to many factories and plants, many of which are in a state of abandonment and degradation.

Especially among young people, there is a real passion for abandoned places that are often used as a 'palette' by graffiti artists to create beauty in place of decay; the desire to visit these decaying places has made real tourism dedicated to these destinations. Indeed, a somewhat underground, somewhat adventurous, somewhat 'strange' tourism: yet fascinating.

The industrial area of Sesto San Giovanni, for example, has been transformed by street artists Pao, Tawa and TvBoy, making it a must-see destination for lovers of the genre.

In the provinces bordering Milan, we should also mention the Consonno site (50 km north of Milan), the toy town that fell into ruin and is now the site of beautiful street artworks, and the abandoned Mombello asylum, a disturbing and spectacular testimony of an Italian reality that cannot be forgotten.

But now, let's look at the most essential street art site on the outskirts of Milan, the Zak Castle.

Graffiti is the most honest way to be an artist. You don't need money to do it, you don't need the education to understand it, and there is no admission fee.

Just outside Milan, in the town of Cormano, there is a truly incredible place: an abandoned factory transformed into a veritable temple of street art called Zakula's or Zak's Castle.

The Castle king is Zakaria Jemai, a sixty-year-old Tunisian man with a mysterious aspect, who arrived in Italy many years ago and decided to make this abandoned place his home. With a degree in administrative law and two children, one day Zakaria chose to give up everything to travel the world and become a chef: however, when he arrived in Italy, a tragedy struck him, throwing him into illegality.

"At a certain point in my life, I became an illegal immigrant", says Uncle Zak, "there were two ways: either to become a delinquent or a bum or to get back up by suffering. I chose the second one. I saw this building, and I don't know why I decided to make it my home. And after ten years of suffering, the castle was born with all the nuances of my life drawn on cracked walls, just like it happened to me".

Thanks to his great passion for art, Zak has turned this gloomy place into an objective point of reference for many Italian and international street artists who, in turn, have turned these old ruins into a temple of wall art. As well as filling the walls with marvellous works of art, Zak's castle has become a meeting place for artists where they can spend convivial moments with 'uncle' Zak, listen to his stories or share a meal.

Zak's castle has been used as a location for several fashion photoshoots, commercials and much more: the well-known singer Ghali, for example, shot the video for his song 'Hababi' here.

Uncle Zak has turned his castle into a place for art therapy: many autistic children give free rein to their creativity by drawing on the castle walls under professional supervision, proving that beauty can really save not only the world but also the people.