The most beautiful romanesque churches in Apulia

The ancient Romanesque cathedrals stand out for their impressiveness and majesty among the many historical and artistic beauties of Apulia. This architectural style, which develops between 11th and 13th centuries, in this region acquires so special and typical peculiarities that it is defined Apulian Romanesque.

The Cathedral of Trani is dedicated to Santa Maria Assunta. It is probably the most striking and astonishing romanesque building in Apulia. Developed vertically, with a slender profile, it stands right on the sea. For sailors and for enemies in fact it had to be one of the most visible and recognizable buildings of the Apulian coast. Consecrated in 1143, it was built on an earlier church, which was erected in turn on the remains of a 4th-century cult building, still visible below the crypt. The main feature is the high bell tower (59 m), literally leaning against the right nave, with an unusual arc at the base, that allows passage. In the '50s, during a renovation, all the stone blocks of the bell tower were dismantled, numbered one by one and then put back exactly in their own place. 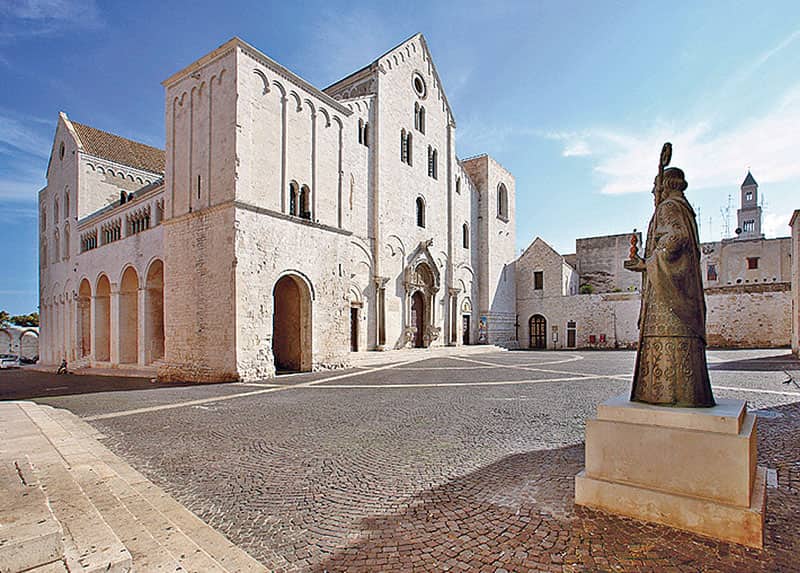 The Basilica of San Nicola in Bari is considered the prototype of Apulian Romanesque. It is the first example that comes to mind when talking about this style. Construction began in 1087, when the relics of Saint Nicholas were stolen from Turkey and transported by sea to Bari. Legend has it that the church is located on the point where the oxen who dragged the reliquary stopped. But in reality it is built on the remains of a Byzantine building. The remains of the saint are still in the crypt since 1089, the year of consecration. And every day they attract faithful both Catholics and Orthodox. The church is in fact open to double worship, just because Saint Nicholas is revered also in the Orthodox tradition and, not surprisingly, is the most venerated saint in the world.

The cathedral of Santa Maria Assunta in Altamura, was built starting from 1232, at the behest of Frederick II of Swabia himself. It is the first and oldest monument of the place, just because the emperor wanted to repopulate this city. The exterior style is more correctly defined Romanesque-Gothic, while the original interior is completely replaced by Baroque. The Gothic is recognizable in all the windows and doors, with the classic pointed arch and also in the details of the rose window and the entrance portal (both dated to ‘300). While the beautiful Romanesque facade is enriched by two massive bell towers (one dated to 16th century). They are linked together by an elevated external panoramic passage, viable above the rose window. 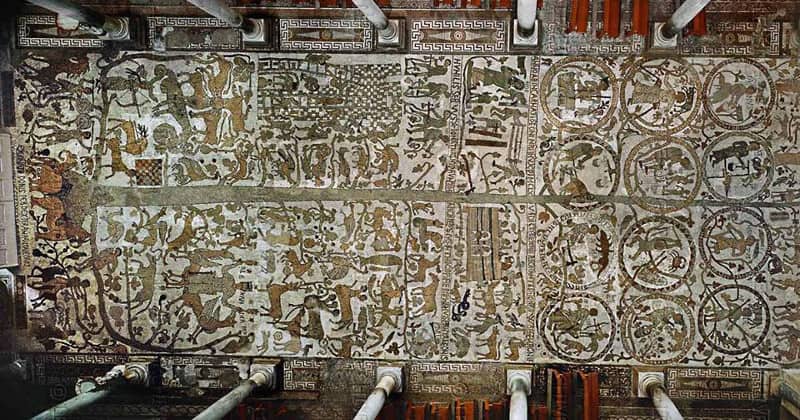 The Cathedral of Otranto is one of the most important buildings in Apulia, both from a religious and historical point of view. It is dedicated to Santa Maria Annunziata and is located in the historical center of this village in Salento. Built in 1068, it was consecrated in 1088 by Pope Urban II (the same one that gave start to crusades). But the most interesting detail is the famous mosaic floor, the largest in Europe, completed in 1165 by the monk Pantaleone. An incredible work, rich in references to Christian traditions, but also to Pagan, esoteric, Kabbalistic, Gnostic and Indian ones. To date, a symbology not fully understood, which still hides many mysteries. Impressive is the chapel with the remains of the 800 martyrs, beheaded in 1480 during the Turkish siege. The Co-Cathedral of Ostuni, dedicated to Santa Maria dell'Assunzione, is also made in Romanesque-Gothic style. And, like the one in Altamura, the interior is Baroque. It is located at the highest point of the white city, which stands on a hill. The facade is very characteristic and its curved lines, that alternate full and empty shapes, make it a unique throughout Apulia. The central rose window, one of the largest of its kind, has a very special symbology. Indeed, it is divided into 3 concentric circles, composed respectively of 7 cherubim, then 12 and 24 little arches. They represent the days of the week, the months of the year and the hours of the day. Also in Salento, in Galatina, there is the basilica dedicated to Saint Catherine of Alexandria. It was built in the second half of the ‘300, at the behest of Raimondo Orsini del Balzo. A crusader, and later Prince of Taranto, who, according to legend, recovered a finger of the saint; that relic is still preserved in the church. But the basilica owes its fame to the extraordinary cycle of 14th century gothic frescoes. From a pictorial point of view it is the most important one in Apulia and the second one in Italy, only after the one in San Francesco church in Assisi. All the interior surfaces are completely decorated by local painters, with biblical narratives, lives of saints, knights, commanders and even satirical and grotesque scenes. Wandering around these naves admiring those bright colors almost makes you lose all sense of time: it is just like walking in the Middle Ages.