Sicily: discovering The Godfather locations for the 50th anniversary of the movie

On occasion of the 50th anniversary of The Godfather release, we want to pay homage with an overview of the places in Sicily featured in the movie

The Godfather is one of the most iconic films in cinema history, was released on 15 March 1972. The film was a resounding popular success and a Hollywood milestone that inaugurated the season of event films. The movie deals with themes related to the founding of America as a melting pot of races and, in this case, explores the realities swirling around Italian immigrants. Folklore and Mediterranean mythology are the main themes of the entire trilogy. Those are narrative strands expressed especially in the scenes shot in Sicily, the historical and legendary place of origin of the Corleone family.

Although most of the scenes are shot in the United States, director Francis Ford Coppola brought the entire crew to Sicily to shoot the "Sicilian" scenes of the film. The warm landscapes, the isolated, sleepy villages, the baroque churches and the tanned faces of the people all contribute to the authenticity of the scenes shot in Sicily.

Let's find out which famous scenes were shot on the island and which locations were chosen to film the Sicilian scenes of The Godfather.

The departure for Sicily 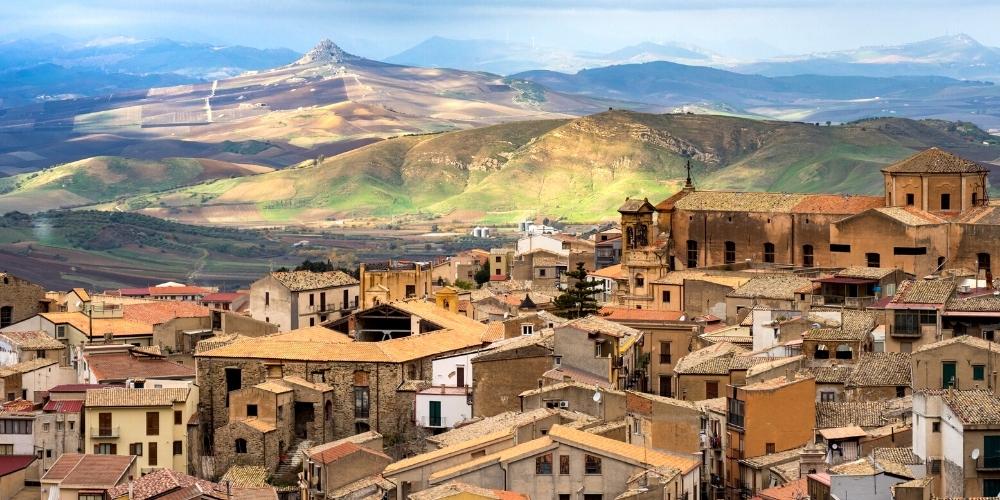 So the cast of The Godfather moved to Taormina while waiting to find a more suitable location for filming. At that time Coppola met Sicilian Baron Gianni Pennisi, a well-known painter and international jet set member. The baron advised Coppola to visit the towns of Savoca and Forza d'Angiò in the province of Messina, two places that were very suitable for the location and logistics of the American film.

Coppola was fascinated, and so the shooting of The Godfather in Sicily could begin.

After the assassination attempt on Vito Corleone, his son Michael decides to get involved in the family business to avenge the assassination attempt on his father: he kills a corrupt police captain and a drug boss. For this reason, Michael is forced to flee the United States and is sent to Sicily, where some family friends will hide him until things calm down and where the young son of immigrants will have the opportunity to rediscover his origins.

The Sicilian scenes of The Godfather are filmed in Savoca, now one of the Most Beautiful Villages in Italy. Here you can see the famous Bar Vitelli where Michael asks his father to marry Apollonia: originally the structure was a former farmhouse, transformed into a bar for filming. Today you can find many objects related to the film inside the building: we recommend you try their tasty lemon slush.

For Godfather fans, the Church of San Nicolò is one of the most interesting places. Although no scenes were filmed inside, several shots show the extraordinary 13th-century façade. Savoca, however, is not only remembered for having hosted the protagonists of the Godfather. Savoca is also a very picturesque historic centre characterised by narrow streets that intersect each other, historical buildings from the Middle Ages and wonderful views overlooking the Gulf of Taormina.

Forza d'Agrò and the wedding with Apollonia

The scenes of Michael's wedding are so iconic: the exit from the church alongside his young bride Apollonia and then the wedding procession walking through the streets of the village. The town in question is Forza d'Agrò and the church where the wedding takes place is the Cathedral of Santa Maria SS Annunziata. Coppola pays homage to this picturesque inland Sicilian village with wide shots that highlight the honey-coloured rock buildings in contrast to the green trees.

In Forza d'Agrò, you can also visit the beautiful remains of the Norman castle, the Durazzesco Arch and the church of the Triad.

Motta Camastra and the Sicily of Vito Corleone The streets of Motta Camastra have been used for several scenes in which Al Pacino walks alongside his bodyguards during his enforced exile: this is his first glimpse of Sicily. Motta Camastra plays its role as a symbol of Sicily in the viewer's imagination so well that it is reused in Godfather II in flashbacks where young Vito Corleone is hiding from the Mafia boss who killed his family while waiting to sail to America.

The death of Apollonia at the Castello degli Schiavi

At this point, the crew moved on to the province of Catania to shoot another key scene in the film: the death of Apollonia. Life for Michael Corleone seems to have regained a certain serenity and value as he spends his days in the countryside, in love with his young wife, teaching her English and how to drive a car and waiting for news from the other side of the Atlantic. This calming situation is abruptly interrupted by an attempt on Michael's life, who is saved by a miracle: the bomb placed in his car explodes with not him but Apollonia on board, who wanted to show her husband that she was capable of driving alone.

The Castello degli Schiavi in Fiumefreddo town (province of Messina) is where these tragic events take place. The Castello degli Schiavi is an eighteenth-century building in full Baroque style, identified by an iron portal with a lava stone arch surmounted by a shell and a Saracen face. In the film, this was the Don Tommasino home, a family friend of the Corleones who shelters Michael. After the assassination attempt, Don Tommasino admits that since the secret of his identity has been leaked, perhaps it is time for the young man to leave Sicily and return to New York.

The Godfather backs to cinema

If you weren't lucky enough to see The Godfather on the big screen 50 years ago, today you'll have the chance to make up for it: Francis Ford Coppola's masterpiece is back in cinemas to celebrate this anniversary in a restored version.

We invite you to go to the cinemas and not miss the show: and this is an offer you can't refuse.