Palazzo Reale in Milan: all about the Exhibition Corpus Domini

In a society where people have renounced their corporeality to dissolve themself in an ocean of digital images, the pandemic has made us even more aware of our vulnerability.Let's explore the Corpus Domini exhibition together.

In recent decades, human society has lived a rapid evolution towards an intangible world made of screens, monitors, avatars and augmented reality. We have given up our bodies to navigate towards a dreamlike and abstract future that has led us to question either the definition of what is real but also the idea of a person. The exhibition Corpus Domini comes from these reflections. Set up in the beautiful halls of the Royal Palace in Milan is a path of great artistic, philosophical and sociological depth that will make us discover the transformation in the last fifty years. A thematic journey that starts from the carnal perception of the human body - Body art - and moves towards hyperrealism to reach the actual pandemic era that has put back at the centre of attention the human body as a defenceless and fragile entity.

For decades, the Palazzo Reale in Milan has been the exhibition venue for some of the most important art exhibitions in Europe. These events have often mirrored critical societal changes, profound transformations represented through the powerful tool of art.

The exhibition Corpus Domini: from the glorious body to the soul's ruins was conceived precisely for this purpose, as an artistic testimony to a profound change that is taking place in our society, in the perception of our bodies and in our souls.

The exhibition is a tribute to one of the greatest artists of Body Art, Lea Vergine, who died a year ago. She chose Francesca Alfano Miglietti as curator of the exhibition to give life to this great project that includes, in addition to the works of Lea Vergine, the results of 34 other artists. Milan decides to invest in the powerful tools of art to face the difficult moment we are living. Thanks to the Corpus Domini exhibition, it reconfirms itself as a vanguard city because of the plurality of stylistic figurative languages and the public debate on current issues.

The exhibition, the artists, the works 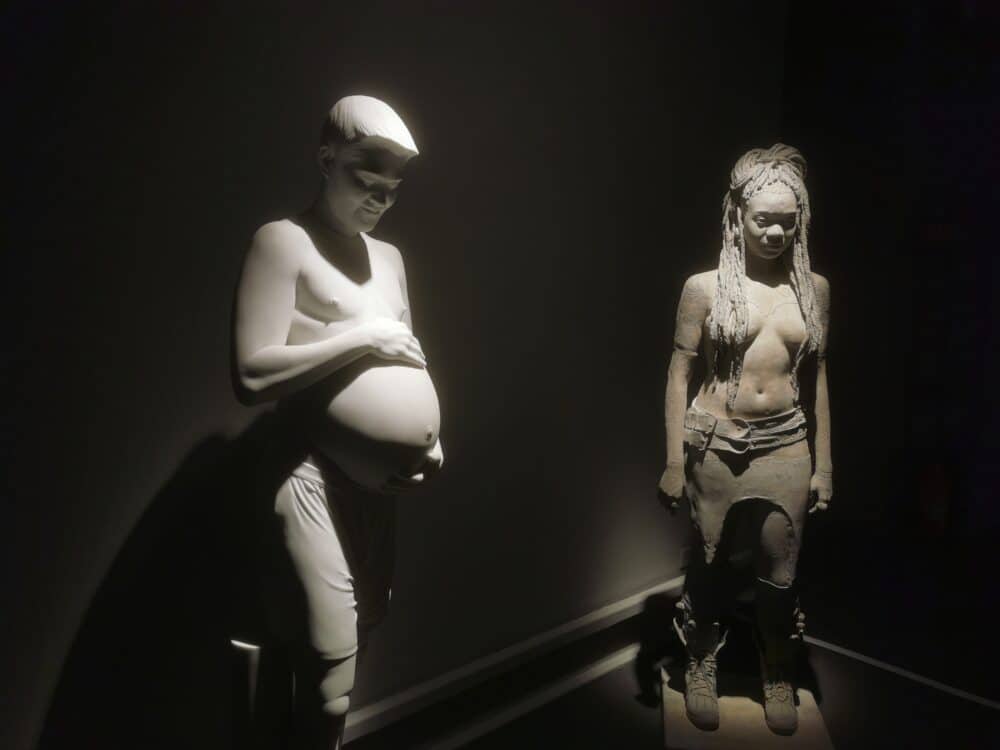 Corpus Domini: from the glorious body to the soul's ruins is the exhibition held at Palazzo Reale in Milan from October 27 to January 30, 2022. You can admire 111 works, including installations, sculptures, drawings, paintings, video installations and photographs created by 34 internationally renowned artists, some of which appear in Italy for the first time.

The works on display have been made available by the artists, museums, foundations, archives, private galleries and collectors: an impressive number of entities have collaborated to create this exhibition that aims to rethink for the first time the concept of humanity after the traumatic advent of Covid19.

Inside Palazzo Reale, you will find the works of renowned international artists such as Janine Antoni, Joseph Beuys, Gino de Dominicis, Antony Gormley, Charles LeDray and many others. A particular section concerns Lea Vergine: in this room, you can admire her works, books, documents and photographs that testify to the importance of her research in the field of Body Art that have made her a point of reference for all the narrations related to the perception of the human body.

For the occasion, a bilingual catalogue (Italian and English) will be published by Marsilio Editori: it contains an anthology of images from the exhibition and an essay by curator Francesca Alfano Miglietti.

The title of the exhibition wants to denounce the disappearance of the "real body" in favour of what we could define as the "spectacle body": the human body goes from being glorious - rebellious, carnal, physical, authentic - to being empty, perfect in the forms required by the contemporary world but homologated and ruined inside.

Our physicality dissolves into larger agglomerations, into categories that deprive us of our identity; we are the bodies of exodus, work bodies, silent multitudes.

"The boundary between real and imaginary is less and less recognizable, so much so that we absorb reality inside a screen, as demonstrated by the obsessive presence of screens in our lives: flat screens of televisions and computers, video games, smartphones." says the curator, who continues: "The screen cancels the distance between the viewer and the scene, invites him to immerse himself in it, offers him a reality at his fingertips, but on which his hand has no grip."

The exhibition aims to show the change in the perception of the human body that has taken place in the last fifty years of the twentieth century until today. This change goes through the first phase of the exaggerated exhibition, to continue with a subtraction of the distinctive elements that make us different from each other, to arrive at homologation and invisibility.

Our age highlights two distinct types of corporeity: the first is produced by the world of entertainment and wants us to be perfect, young, slim, healthy, non-smokers and without wrinkles and hair; the second model is the invisible one of people outside the world of screens, vanished into symbols of categories and indistinct masses such as suitcases, clothes, bicycles, work tools, groups of sick and unemployed people.

While the Corpus Domini exhibition was taking shape, the world was hit by the pandemic so that the concept also took on a new meaning: the human body is back at the centre of attention in its most carnal form, but instead of being glorious, it is a body, fragile and defenceless, attacked by small invisible infectious particles.

Corpus Domini: from the glorious body to the soul's ruins is an itinerary that accompanies the visitor through the art trends of the late twentieth century and early two thousand and analyzes the historical paradigm shift from Body Art to Hyperrealism.

The historical and social changes that struck the world in the 1960s led humanity towards a profound analysis of the self, the value of identity in a world that was overwhelmingly opening up to knowledge and breaking down walls and borders.

The Body Art movement exploded in Europe and California, both in its more discreet version: one mainly mechanical means of reproduction such as video, film and photography and the other one in its more extreme variant, performance.

The protagonists of Body Art were rebels, involved in the political debate, destroyers of taboos, eager to show the world their wounds and pain.

Marc Sijan is an American sculptor from Serbia who wants to rediscover the astonishment and wonder in looking at bodies that no longer represent classical beauty but rather the aesthetics of the society in which we live. Corpulent, tattooed and senile bodies, bodies of work, domestic, humble and palest, are the human beings that Marc Sijan tells. In the exhibition, his works are two life-size bodyguards dressed in a uniform that gives a more familiar look, but at the same time puts at the centre of the viewer's attention human figures that, seen in everyday contexts, would not receive the same gaze. 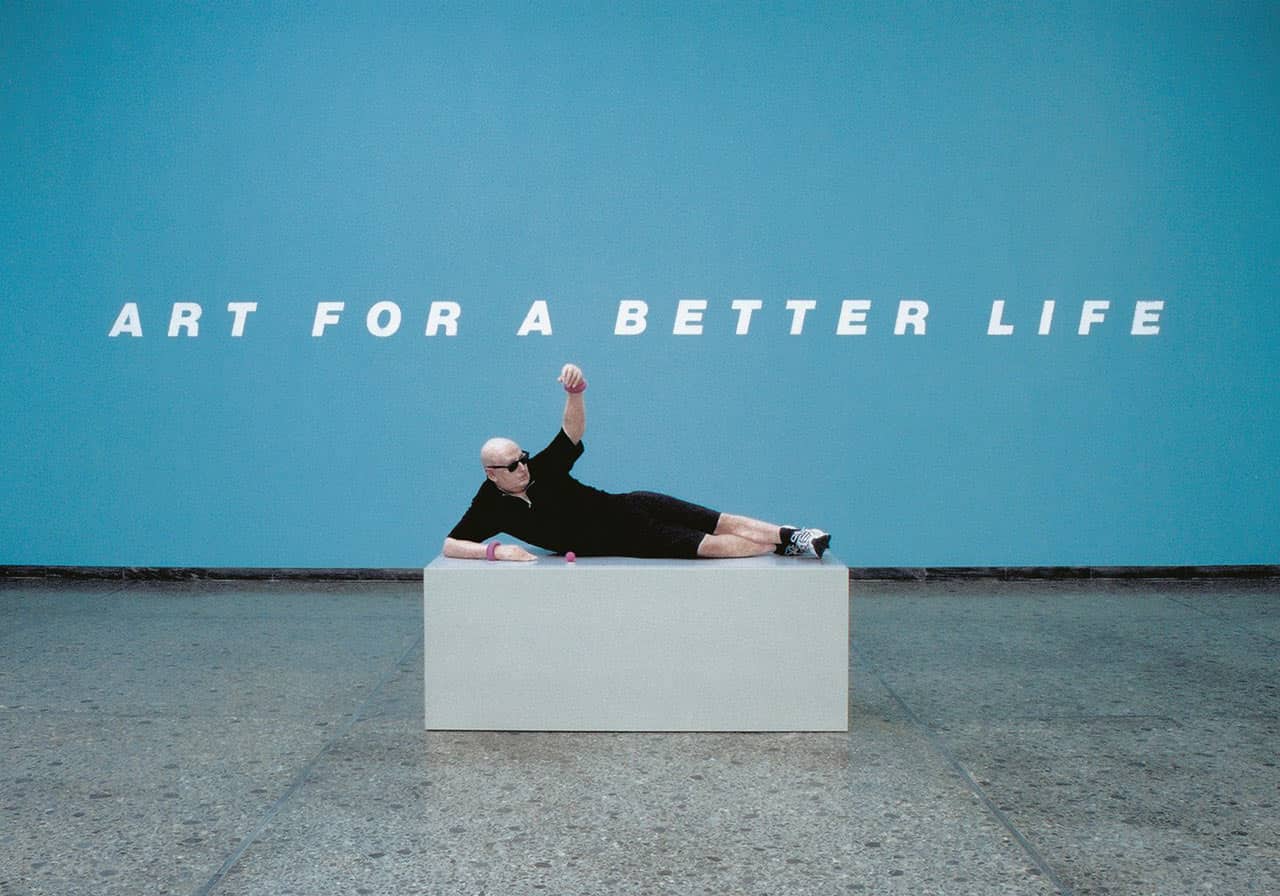 With the transition to hyperrealism, carnality becomes a faded memory, the human body is now evoked only through the objects that define it. The boundary between what is real and what is imaginary is getting weaker and weaker, so much so that reality is absorbed by screens - of computers, video games, televisions, smartphones, devices that recognize our fingerprints, that call us by name, that identifies us and with which we can interact.

As Jean Baudrillard says, what we are experiencing is a "video phase" of reality, the blood of man has been replaced with the "white sap" of the media. The dizzying acceleration of communication processes, the advent of social media and the political and economic metamorphosis have torn away from the natural body that we thought we knew.

In his indistinguishability, Michal Rovner's video installations are mobile drawings. The human being is described as a minor element in the world as a whole, deprived of his identity, political and social, divested of his physicality and his peculiarities. The mobile deserts of men and women, who are lost among the wefts of the world, also erase ideologies and make individuals alienated but equal, without boundaries.