Genoa, the 'Lady of the Sea', is one of Italy's four maritime republics with Amalfi, Venice and Pisa. Like many other maritime crossroads, Genoa's characteristic caruggi (vicols) have attended dramatic events and memorable stories, but also important people in the social field, in the Italia evolution towards self-improvement: the beauty of its murals and street art represent its journey of urban

Without art, we would need too many explanations

ON THE WALL: REBIRTH THROUGH ART

It's 11.30 a.m. on the morning of 14 August 2018, and a violent summer cloudburst is breaking over Genoa. Hundreds of vehicles are travelling along with one of Liguria's main traffic street, the A10 viaduct that runs above the Polcevera riverbed. Suddenly, a deafening noise fills the air, and in a few minutes, a tragedy unfolds the Morandi bridge collapses and almost 200 metres of structure collapse, dragging several cars into the disaster in a whirlwind of sheet metal and iron. The fire brigade fought its way through the rubble, trying to save as many people as possible, but the bodies of 43 people were left in the wreckage.

This tragedy has left a deep wound in the heart of Genoa that today, three years later, has still not healed. The city is struggling to overcome this senseless tragedy and is doing so also through art: the Municipality of Genoa has launched a wonderful urban requalification project called ON THE WALL in 2020, which mainly affects the district most affected by the tragedy, the Certosa district; 15 Italian and international artists have created beautiful murals to help the citizens of Genoa through art and beauty to change positively the perception of the city space.

THE MURAL DEDICATED TO THE FIRE BRIGADE

The 180-square metre mural was painted by the artists Drina A12 and Giuliogol. The work was inaugurated on 24 April 2021 and on this occasion, Grazia Buongiorno, aka Drina A12, said: "This is a thanksgiving for the daily work that the firefighters do for us, even for things that seem trivial, they do a wonderful job every day. The mural was created to thank them for everything they did when the Morandi bridge collapsed, but also for what they continue to do every single day."

ZEDZ, THE DUTCH ARTIST ON THE EDGE OF THE “RED ZONE”

It is a work of almost 600 square metres, the largest in Genoa. Emanuela Caronti, the contact person for the On The Wall project said: "It is the biggest wall in Genoa, Zedz worked for 5 days alongside the workers who are dismantling the rubble of the former Morandi bridge, at the edge of the red zone. He wanted to transfer everything he perceived in this neighbourhood, from tragedy to reconstruction, into work through the use of dynamic forms charged with tension. Thanks to the brightness and radiance of the colours chosen - orange, light blue, fluorescent green - juxtaposed with black, grey and white, the tension is represented as a wish and good omen for a city that wants to rise again with joy, art and colour".

ALL ON THE WALL MURALS 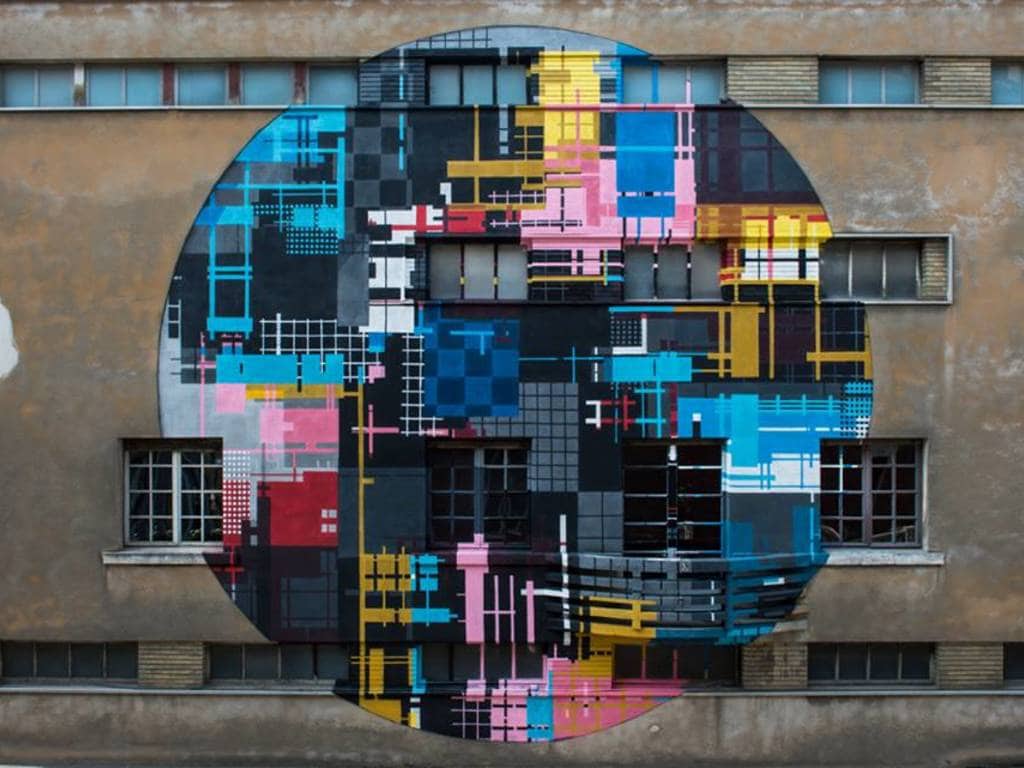 In addition to these two beautiful works of street art, the urban regeneration project in the Certosa district includes these works:

- Untitled - Blef: look for his signature among the graffiti

- Liberi di perderci - Antonello Macs: an invitation to leave behind the superfluous to live the present and the important things

- Deconstruction/Reconstruction - Greg Jager: the work is optimally visible only from a precise point

- This is site-specific - Ozmo: Cupid and Psyche embrace Certosa

- Wall Painting - Agostino Iacurci: work inspired by the Genoese palaces and... by an inhabitant of the neighbourhood

- Fantozzi - Rosk & Loste: Did you know that Fantozzi (Paolo Villaggio) was from Genoa?

- Certosa Freestyle - Geometric Bang: a work inspired by those who live in the neighbourhood every day

- Il contadino - Rame13: a tribute to the neighbourhood's agricultural past, once outside the city walls

Genoa is a fascinating but at the same time difficult city: there are many urban areas of social decay that spread throughout the city, right among the caruggi (the name of the narrow and high alleys of the old city). Many great men of Italian history have dedicated their lives to telling the stories of these realities, such as Don Andrea Gallo, the anarchist and pacifist street priest who fought for years alongside the last and marginalised and to whom a square is now dedicated right in the caruggi.

Among these long, narrow streets you can find some of the most beautiful murals with a social theme that recall the heroes who fought the most important social battles of the last century, many of whom were Genoese.

In the districts where the sun of the good Lord gives not its rays, it already has too many commitments warming the people of other neighborhoods.

FABRIZIO DE ANDRE, “Nothing is born from diamonds, flowers are born from manure“

Fabrizio De André, one of Italy's greatest songwriters, was a Genoese anarchist who in many of his songs made explicit references to the hypocrisy of Italy's respectable society, which often preferred to judge and turn up its nose at everyday tragedies rather than try to understand and forgive. One song among all is "Via del Campo", is dedicated to one of Genoa's caruggi, where the oldest profession in the world is still practised today.

If people were taught beauty, they would be given a weapon against resignation, fear and silence.

PEPPINO IMPASTATO AND THE FIGHT AGAINST THE MAFIA 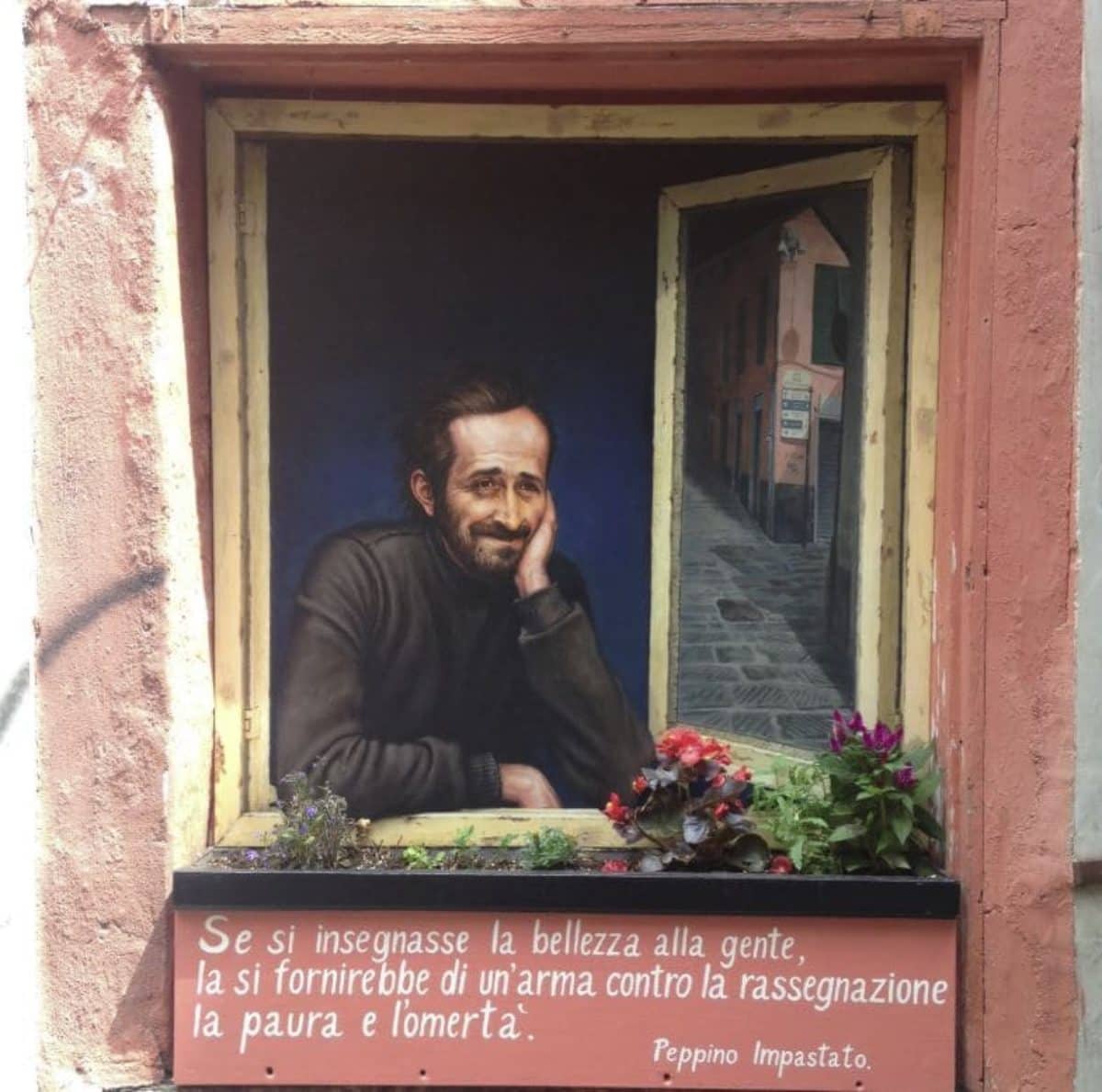 In Vico Della Rosa you can see Peppino Impastato smiling looking out of a painted window. The Sicilian activist was killed on 9 May 1978 by Cosa Nostra after having fought against the Mafia all his life, founding the free and self-financed radio station Radio Aut and constantly reminding us that we are the architects of our destiny and that we choose the causes we want to fight for: despite coming from a Mafia family, Peppino Impastato did not allow himself to be bent by that world and did not abandon his Sicily but stayed to fight for a better world.

Fantozzi is also a therapist: he freed Italians from the fear of being Italian. 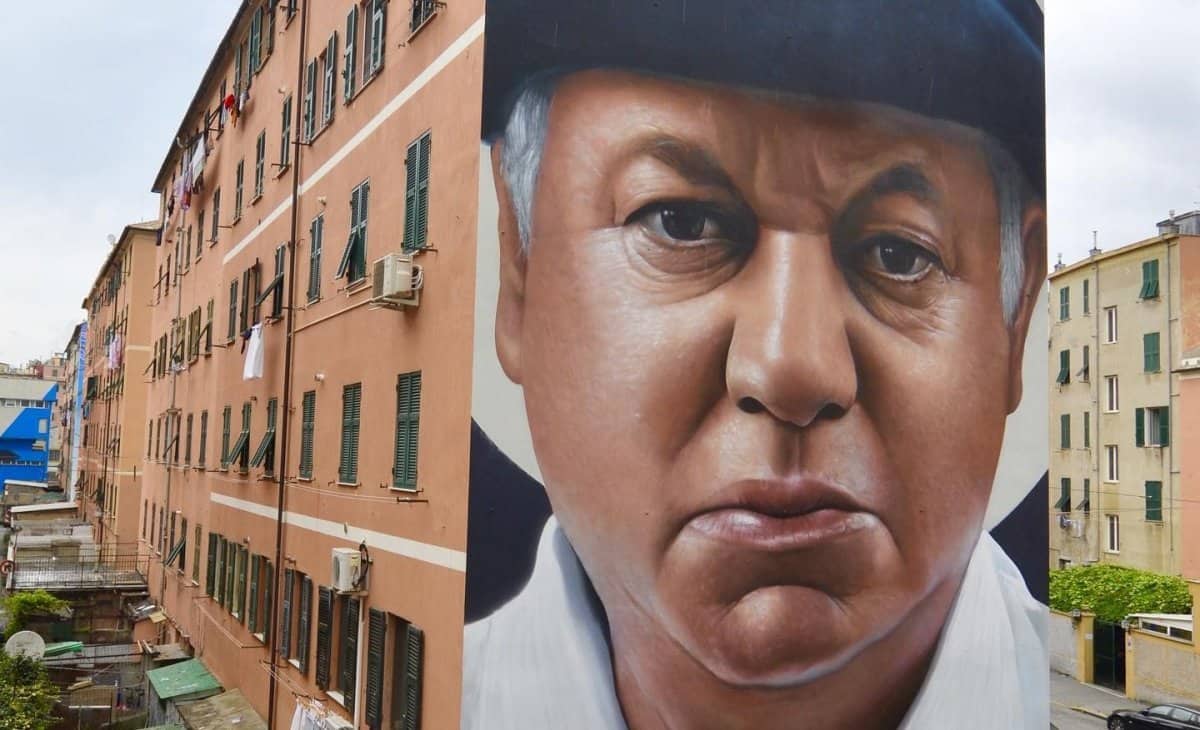 The Certosa district is place where you can see another murals of an Italy's most famous man, Paolo Villaggio, the artist who created the comic character of Fantozzi. With this famous film character Paolo Villaggio ironically recounted the dramas of working-class Italy from the 1960s to the 1980s. 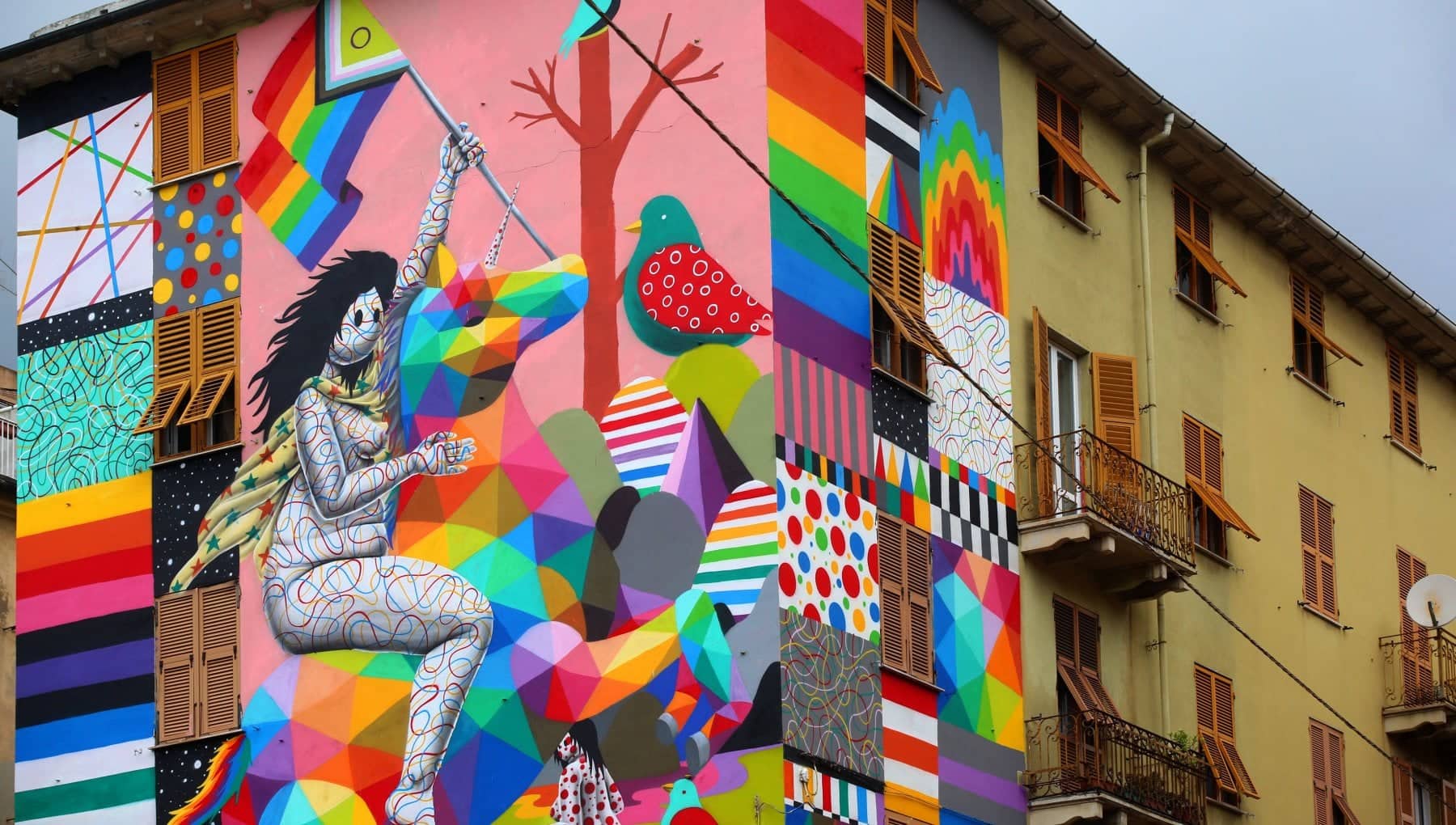 To talk about more topical issues, we can mention another great mural by world-famous street artist Okuda San Miguel, who painted his "The Freedom Warrior" in Genoa: the Spanish artist drew inspiration from the famous iconography of Saint George on horseback to create this warrior of peace and freedom who fights for the rights of the LGBTQ+ comunity. 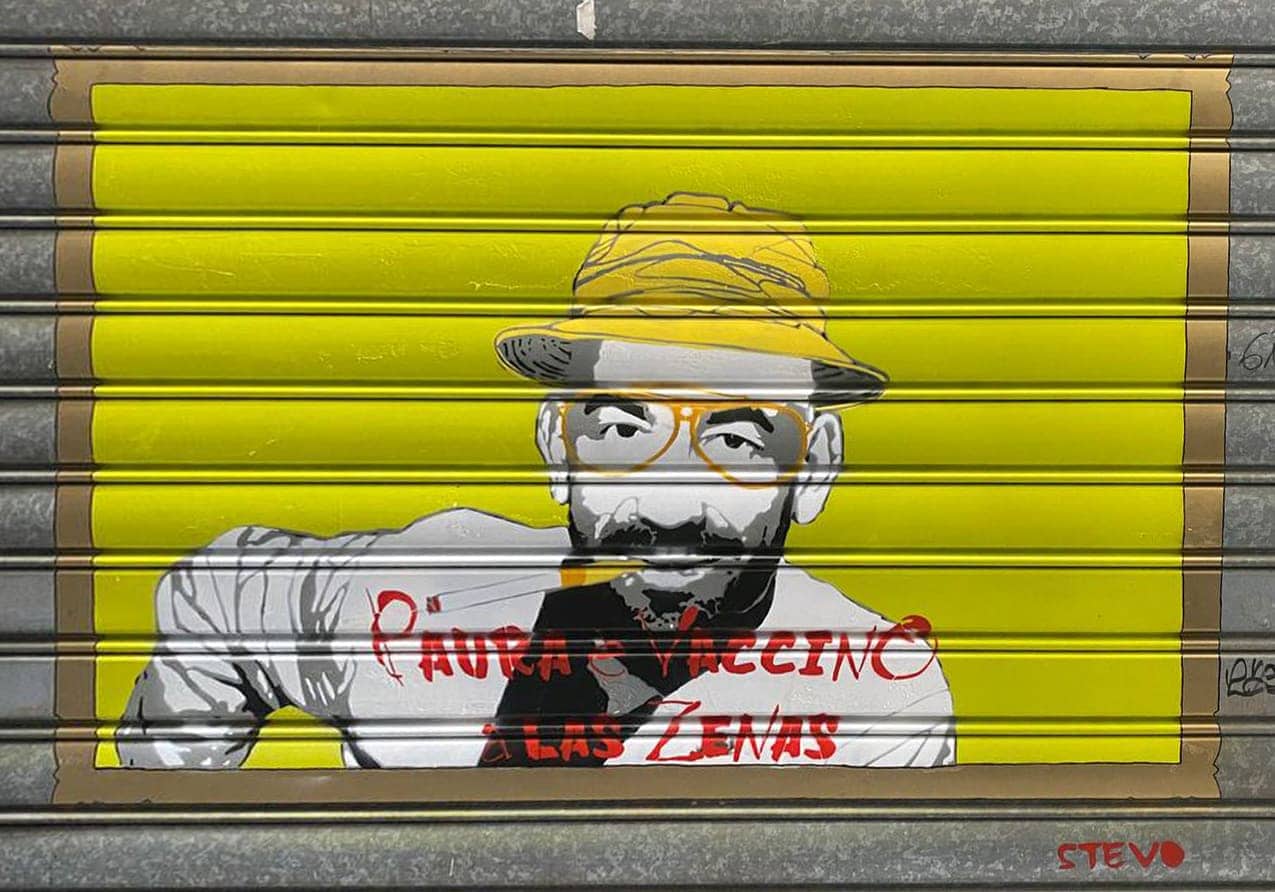 One of the latest murals created in Genoa in this period touches is about the vaccine: the face of Matteo Bassetti, infectious diseases director of the San Martino hospital in Genoa, who has often appeared on television recently, has appeared on a tv talking about Covid19 vaccine. The work was created by the Genoese street artist Stevo, who wanted to recall the poster for the famous film starring Johnny Deep, "Fear and Loathing in Las Vegas": instead of Las Vegas however, here it reads Zena "Genoa" in dialect.