The most popular attractions of the Itria Valley are the famous “trulli” of Alberobello, the little towns of Ostuni and Locorotondo and the tasty food of Cisternino and Martina Franca.

However, many people don’t know that beyond these typical attractions, there are two archaelogical sites in the Itria Valley which are considered as unique in the world.

Today we will talk about the archeological sites of Santa Maria di Agnano in Ostuni and Egnazia in Fasano.

The archaeological park of Santa Maria di Agnano is located only 3 km far from the white city of Ostuni. It consists in an archaeological and natural park situated at the foot of the hill of Ostuni that appears at the secular olive trees valley. This site is in a cave and, from there, you can admire the green color of trees and the blue of the Adriatic sea, reminding tourists to a very ancient place.

Besides, the whole history of Ostuni is based on the few metres of ground that cover the hill. Every historical period of the city is preserved and studied here in Santa Maria di Agnano, from the Middle Age (characterised by the rupestrian church dedicated to the Holy Mary with Baby) to the Messapian Age (VI - III B.C.) when the cave was a sanctuary dedicated to the female world and the Greek goddess Demetra.

The most important find: the Ostuni Woman

The most important archaeological exhibit of this place dates back to 28.000 years ago, to the Stone Age. Its name is Ostuni 1, a burial of a 20-years-old and 1,70 meters tall woman, placed in the typical position of prehistoric burials: on a side, with her right hand under her cheek and the left one on her stomach. Here, the archaeologists made an unexpected discover: the girl was 8 months pregnant and, for this reason, it is considered as the most ancient burial of blood relatives in the world.

Now, the original burial is preserved in the Archaeological Museum situated in the middle of the old town of Ostuni where there are also the most important archaelogical finds from the excavation and a very suggestive reconstruction of the mother with the baby.

Egnazia is located on the coast of Fasano, in a place called Savelletri. The great archaeological park of this old city is divided into three different areas: west necropolis, National Archaeological Museum and the roman city where the visitor can discover its multimillenary history since the Bronze Age.

The first evidences of human presence in this place date back to the XVI century B.C. until the Middle Age. So, human beings lived in this land for over 3000 years by building cities, necropolis and harbours which, consequently, modified the landscape.

The Messapian period (VIII - III B.C.) was strongly influenced by the Greek culture. Some of the most important findings of Apulia date back to this period such as: chamber toms painted with pomegranate (a symbol of the goddess Demetra) and, above all, a great city walls built with megalithic stones. Furthermore, the museum preserves the typical pottery of Egnazia: a black pottery with red illlustrations and white decorations that has been found for the first time in this city and, nowadays, is popular all over the world. 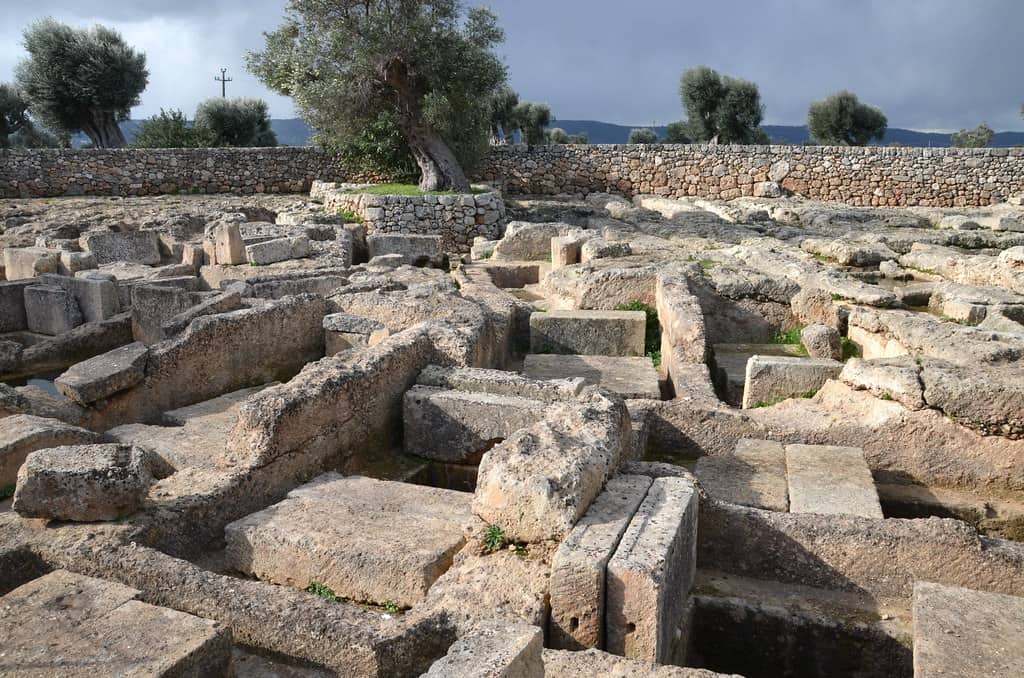 However, during the Roman period the city became one of the most important harbour between the cities of Bari and Brindisi and has been mentioned by famous writers like Strabo and Livius, or the great poet Virgil who visited Egnazia during his journey towards the East. Besides, the city is crossed by Via Traiana where it is possible to visit the old baths and a church, but the entire city is full of shops, houses, streets and eastern temples that plunge visitors into a unique atmosphere characterised by old populations and traditions.