Apulia: The National Archaelogical Museum of Taranto (MArTA) in 5 steps

How about we discover together a chest of ancient treasures preserved in the Archaeological Museum of Taranto?

Taranto is a place full of wonders, art, and especially history. It is known as "la città dei due mari" (the city of the two seas) due to its location straddling the Mar Piccolo and Mar Grande. Since ancient times, the capital of Ionian Apulia has played an important role. The singular National Archaeological Museum of Taranto (MArTA) is one of the most important museums in Italy, and it still preserves the signs of the ancient and glorious past of the city of Taranto. Let's discover it together in 5 steps.

Art never ceases to fascinate. Monsignor Ricciardi, originally from Taranto, had a solid and admirable personality. During his apostleship and his time as Bishop of Nardò, Monsignor Ricciardi carried out works of great religious value and charity, earning the admiration of all his fellow citizens. However, he took a great interest in the area's cultural heritage, supporting restoration and preservation activities. In his will, he expressed the desire to donate to the museum his collection of paintings.
These include the beautiful painting "Addolorata tra i santi Barbara e Nicola" by Antonio Olivieri from Martina Franca in Apulia, the icon of the Virgin Odegitria, the Addolorata piangente painted in oil on a zinc plate, the painting "Maddalena con il teschio" and other equally wonderful works of art. They are all related to religious themes and they date between the 17th and 18th centuries. Most belong to the Neapolitan school of Vaccaro, Luca Giordano, Francesco Solimena and Paolo de Matteis. 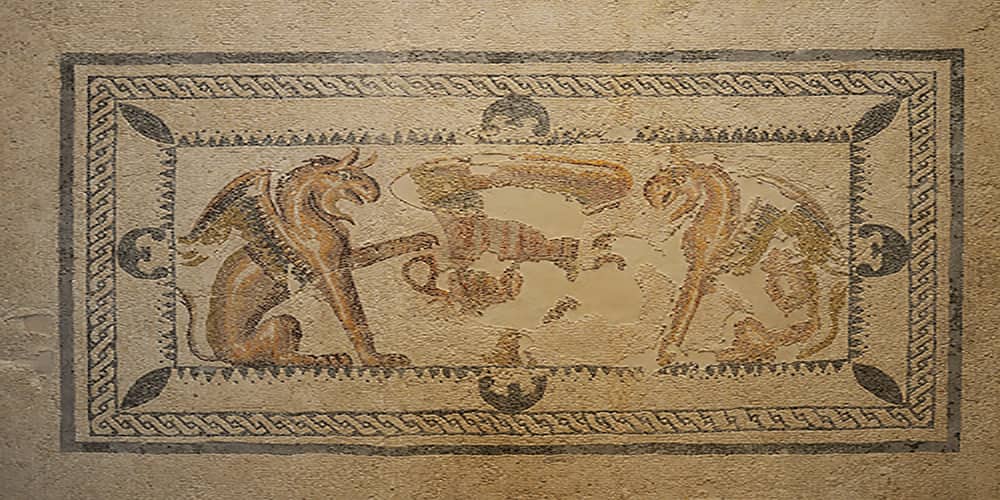 How was Taranto in Late Antiquity and the Early Middle Ages? Although much of the structure of the city of that historical period has been lost due to building work, there is no lack of archaeological data and finds that give a clear idea of how the city of Taranto looked in the Early Middle Ages. For example, excavations carried out in 1931 revealed the Via Decumana, also used by the Byzantines. However, the mosaics from this era can’t be missed, including the polychrome floor mosaic from the 5th century AD.
There are also artifacts that show how powerful and productive the economy of Taranto was in Late Antiquity. The import of ceramics from Africa and the East was significant, including the Tripolitan oil lamp, 4th-6th century AD, as well as amphorae, kitchenware, and terra sigillata pottery. Moreover, finds such as funerary stelae with Greek, Jewish, and Latin inscriptions demonstrate the multicultural nature of Taranto. Artifacts of great interest and historical value.

The Archaeological Museum of Taranto houses a section entirely dedicated to the city's history in Roman times. From 280 to 275 BC Taranto fought a war against Rome; it asked Pyrrhus, king of Epirus (Albany region), for help and landed in Taranto with 25,000 soldiers and 20 elephants. After many battles, the Romans finally conquered the territory of Taranto.
Over the 20th century, numerous ruins of domus, settlement areas, villas, and baths from the Roman era were discovered. The Museum of Taranto gives its visitors the chance to see a collection of sculptural decorations, frescoes, and tessellated floors from these living spaces. It also houses three fascinating floors found near the Istituto Maria Immacolata, where there was a large domus. There are also important marble sculptures such as the Statua di giovane togato and the Statua di Venere, dating from the first century BC and the Statua acefala di divinità femminile and Kore dating from 500 BC.
Lastly, it is impossible not to mention archaeological objects related to Roman funerary contexts such as grave goods and tombstones in marble. The letto funerario in carparo is very interesting and it dates from the second half of the 2nd century BC.

2. History of an Archaic Taras

As it was originally called, Taras has very ancient and important origins. Founded by the Spartans in 706 BC, it quickly became one of the wealthiest and most powerful colonies in Magna Graecia, thanks to its trade, culture, and military strength.
The archaic and Magna-Greek section of the museum is rich in artifacts from this interesting and significant historical period. There are ceramic grave goods, everyday objects, epigraphs, and impressive Paro marble statues. The perfectly preserved mosaics and coins depicting the city's symbol, the hero Taras riding a dolphin are also worth seeing.
However, the most breathtaking section is dedicated to Ori di Taranto (Gold of Taranto), a great local goldsmith's tradition. Through these jewels, including tiaras, earrings, rings, necklaces, etc., it is possible to admire the refinement of the objects and the distinct art of goldwork. These include the splendid Navicella earrings and the Schiaccianoci.

1. An even more ancient history

Taranto has its roots in an even more ancient period, the Palaeolithic. A selection of finds from this era testifies to the evolution of the territory of this city from 1.6 million years ago, with significant discoveries, such as the Veneri di Parabita, dating around 18,000 BC. However, the Neolithic era is also of great value in the history of this region. In this section, you can find outstanding pottery objects, including those made using the "Serra d'Alto" style, which stands out for geometric and spiral motifs. The "Diana-Bellavista" is another interesting style characterised by simple decorative elements.
The Museum also offers the possibility of admiring artifacts and findings related to the Neolithic people's funerary practice and the art of working stone, transforming it into tools such as blades, scrapers, or arrows. Real traces of history linked to such a fascinating place as Taranto.

The MArTA is located in the former Convento di San Pasquale di Babylon, near the Giardini di Piazza Garibaldi. It is open every day from 8 am to 7 pm.
For further information on timetables, it is possible to call the number 099-4538639.