Top 11 best things to do in Palermo

Share
Would you like to immerse yourself in the atmosphere of myths and legends, discover unusual itineraries and a street food that delights the palate of tourists from all over the world?The streets of this millenary city smell of history, here you will be crashed by street vendors who attract attention by “singing” their goods, you will be charmed by  the local folklore, the colours and the smells of the eternal city called "All Harbour Around"The capital of the Mediterranean is a combination of unique architectures and styles in an eternal magical atmosphere of art and wonder. Each visitor chooses his personal tour in the city that has been elected the 2018’s Italian Culture Capital. Visit Palermo proposes you the top 11 things to do absolutely once you arrive in Palermo

11 - Have a fresh breakfast with granita and brioche 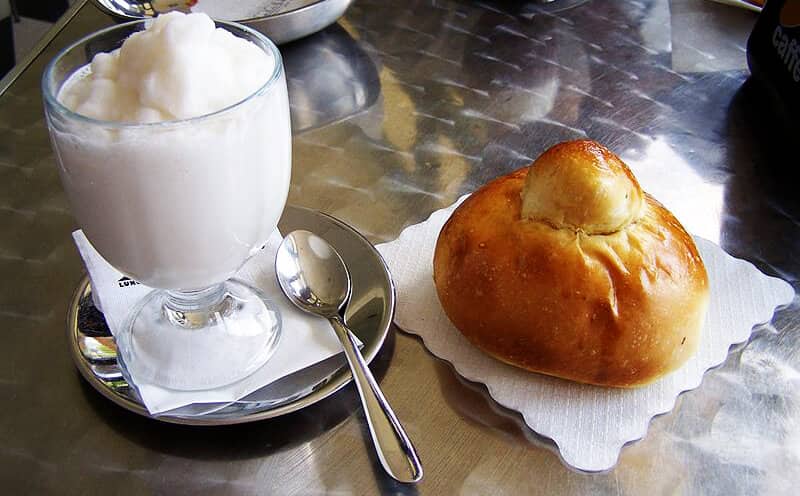 During the hot summer days the soft and fragrant brioche (Sicilian light and slightly puffy pastry) with a little button of pasta on top is perfect to be enjoyed with a fresh granite (original Sicilian semi-frozen dessert made from sugar, water and various flavorings). You can choose whether to be kissed by the sun in one of the many bars of Mondello (Palermo beach) or immersed in the freshness of the vegetation, sitting in a bar of the elegant street Principe di Belmonte

You can not miss visiting the unique churches in the world:
- CathedralIt has a history that dates back to the Punic era, while in Roman times there was a place of Christian worship. In the Byzantine era it was rearranged and the Arab domination then made it a mosque. After the Normans and the Spanish, with the necessary renovations, it arrived to us as we can admire it nowadays.
- The Palatine ChapelIt goes back to the 12th century and it is famous all over the world for its splendid mosaics. The church is dedicated to St. Peter the Apostle. It was constructed as a private chapel, now it is one of the most spectacular examples of the art called of the trilingual people. The saying "breath-taking" can literally be attributed to this wonderful chapel.
- La Martorana ChurchSanta Maria dell'Ammiraglio Church, also called La Martorana, is located near the church of San Cataldo on Piazza Bellini. There are some peculiarities that distinguish it. First of all, it is part of the eparchy of Piana degli Albanese (little village near Palermo, where anciently Albanian people lived), where the liturgy with the Byzantine rite takes place. The Church is an important historic monument, it is included in the Unesco World Heritage, as part of the "Arab-Norman itinerary of Palermo, Cefalù and Monreale". Another curiosity concerns the name: it is said that the nuns of the homonymous monastery invented the local sweets famous all over the world: made with almond flour and sugar, the delicious fruits are called "frutta  Martorana”
- San Giovanni degli Eremiti ChurchThis church is another symbol of the city, present on all the postcards. With its red domes, it looks more like a mosque. Red domes really do not correspond to its past, they never really were of this colour. The church was built under the rule of Roger II between 1130 and 1148, but the red domes are an experiment of the architect Patricolo in 1882
- San Cataldo ChurchSan Cataldo Church also impress the tourist by its Arabic architecture. It was built during the period of William I (1154-66), and it is famous for the Arabic battlement above which stand out the hemispheric volumes of the three characteristic red domes, giving to the building a particular exotic charm. Since 1937 the church has been the seat of the knights of the Holy Sepulcher of Jerusalem, the most ancient and prestigious sacro-military order that since that time holds its custody.

You will feel noises, perfumes and see all around ruined buildings. Following the smell of the sea, between narrow lanes, it is not difficult to find the historical markets, which are four.

• Vucciria Market, between Piazza Caracciolo and surroundings, it was once a meat shop, so the name was originally boucherie, that in French means butchery.
• Capo Market is located in the district that has the same name. Capo Market is  of Muslim age: it rises along the streets of Carini and Beati Paoli, the S.Agostino street and Cappuccinelle street.
• Ballarò Market goes from Piazza Casa Professa to the ramparts of Corso Tukory towards Porta Sant'Agata. Many people choose it for the presence of cooked and street food.
• Borgo Vecchio Market, between Sturzo Square and Ucciardone Square, remains open until late giving to the area a traditional and exotic touch.

You can find it at the markets or in the bars, in the restaurants, the important thing is that it's good. Pasta with wild fennel and pine nuts, Pasta with sardines, Parmigiana, Caponata, rolled anchovies, “Pane e Panelle”, crocche, Sfincione, Baked pasta – “pasta al forno”, “pane ca 'meusa”, famous frittula, arancine and stigghiole. The Palermo street food is a unique one, it was born a long time ago, and it will not leave your palate indifferent!

7 - Discover underground Palermo descending going down to the Qanat 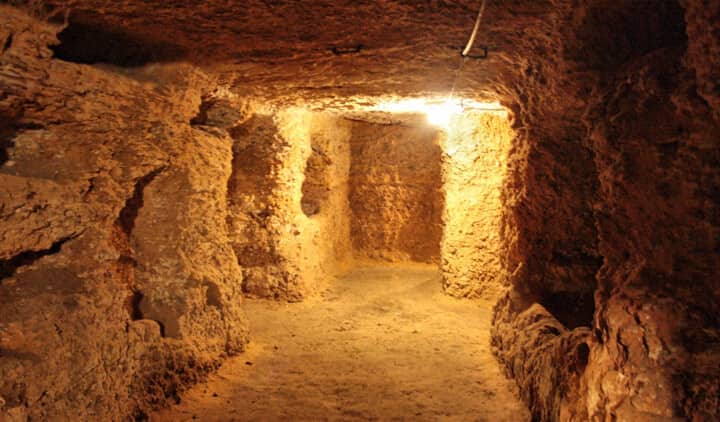 These ancient aqueducts of the Arab period are reached accompanied by the guides of the associations that organize the underground excursions in different periods of the year. 14 meters have been excavated underground and the experience is really exciting.

On the sacred mountain the place of worship of Santa Rosalia is situated – she was a martyr who stopped the plague in the city in 1624. The breathtaking views open onto the port and the wonderful Mondello beach. The traditional ascent, in which many young people participate, is held on September 4th.

5 - Discover the rare vegetation of the Botanical Garden

It was built at the end of the eighteenth century, with the goal to contribute to the development of botanical sciences, the medicine and agriculture, and enrich the city with  the unique vegetation. Among its avenues there are very rare species such as the cotton tree, really appreciated by the Palermo citizens.

4 - Be surprised by the Chinese Palace

This exotic and extravagant palace, in Chinese style, is one of the most beautiful residences of the city of Palermo, a small jewel of art and architecture built in the late 1700s. Real Chinese Palace has also been home to King Ferdinand IV of Bourbon. The building reflects a taste and a love for oriental art that had spread in Europe at the beginning of the 1600s and which had led many nobles to adorn their homes with obvious references to Chinese art. Some say that the oriental style was expressly dedicated to the king's lover, who was indeed a Chinese.

The evocative atmosphere of the Spasimo fascinates tourists and palermitans who love to spend the silent hours among the ancient walls. Actually it has never been a church. It is located in the Kalsa, an ancient Arab quarter, and its construction dates back to the sixteenth century. It became a theater, a warehouse and a hospital. In the twentieth century the earthquakes damaged the building that only in 1988 was restored and then returned to the city in 1995. Nowadays it hosts various cultural, musical and exhibitions.

For almost a hundred years, the miracle of Rosalia Lombardo, at the Capuchins Convent, is known to the whole world. The baby, who died when she was only two years old in 1920 after a probable pneumonia, was mummified by her father. The method used has allowed the perfect conservation until today, it is really incredible, because the girl seems to be just sleeping. 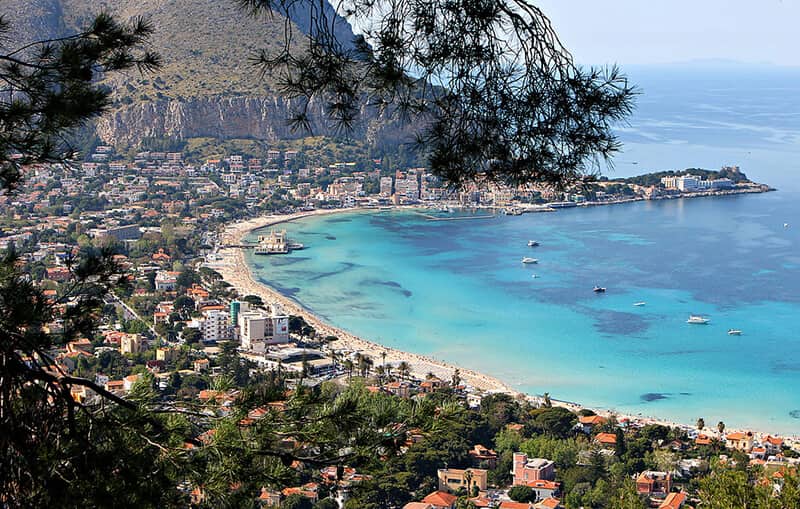 Mondello beach is situated near Palermo, it is one of the most beautiful beaches in Sicily, a seaside resort, renowned in the world as well as for its beauty, for the mild climate, the value of its historical-architectural context and the presence of excellent facilities.Mondello is full of magnificent villas in Liberty style, the beach is considered one of the most beautiful in the world. Despite being a place frequented most during the summer season, it has a particular charm even in winter, which in Sicily often gives beautiful, cool days without wind, which carry within itself a brightness and the clarity of the sky.
Did you like this short tour of the city? Short but full of ancient splendours, short but intense, short and long, because every experience lived looking at the world with wide eyes extends over time, becomes a piece of eternity. This city, every time, will amaze and fascinate you, it will gently attract you to itself. As the great German literary Johann Wolfgang von Goethe wrote, "those who once saw the sky of Palermo will never be able to forget it".Palermo is a promise, follow us in this wonderful adventure!