A dream vacation in Ischia, between the sea, spas and monuments

One of the unmissable destinations of the "ideal trip to Italy" is certainly the island of Ischia, loved by tourists and celebrities from all over the world.

One of the unmissable destinations of the "ideal trip to Italy" is certainly the island of Ischia, loved by tourists and celebrities from all over the world. We have prepared a small itinerary for you to accompany you on your journey.

Brief description of the island of Ischia 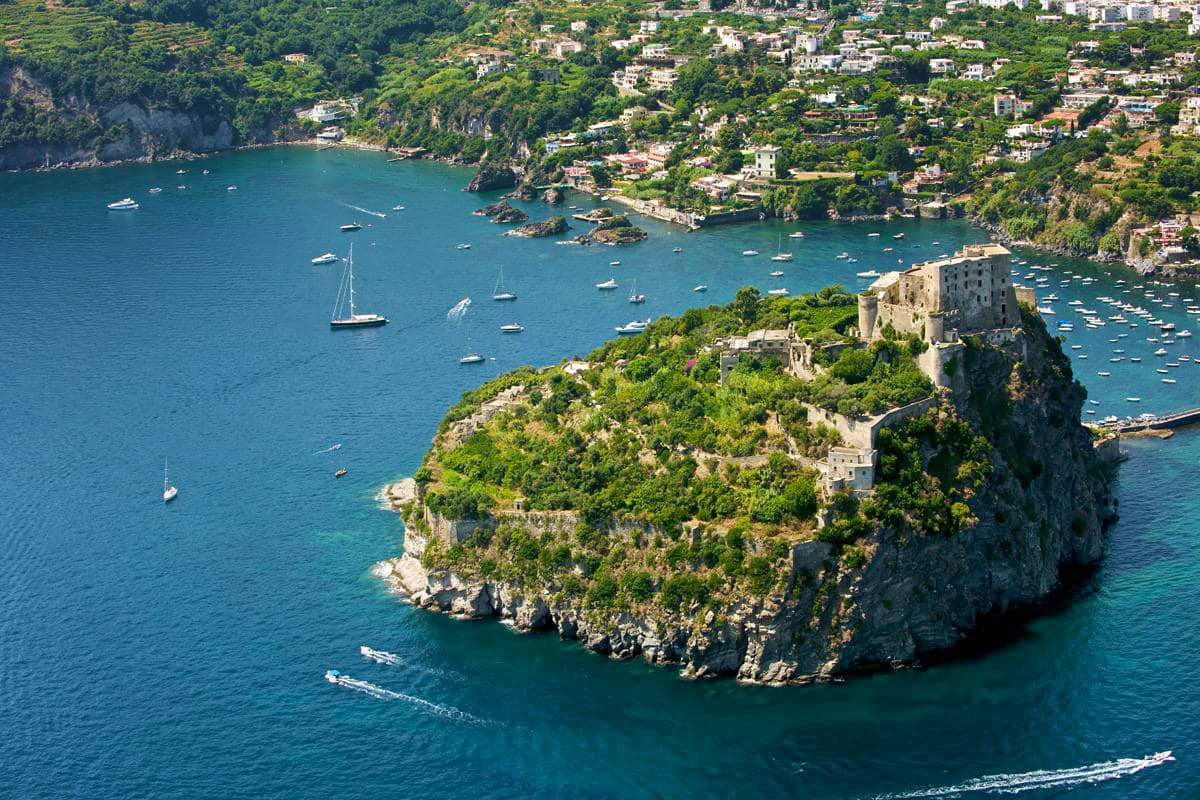 The island of Ischia is the largest of the islands of the Flegreo Archipelago, the third largest in Italy. Already deeply loved by the ancients, Ischia is an authentic treasure chest of landscape and naturalistic treasures and historical-artistic beauties. A landscape in which sunny beaches alternate with pleasant countryside, where the sea blends with the mountains. Dominated by Mount Epomeo, the island of Ischia is also an important thermal center, by virtue of its volcanic origin.

Ischia developed from the core of the ancient city, the Greek Pithecusa, so famous for its manufacture of vases, also praised by the Roman historian Pliny. The ancient city core was destroyed by a violent earthquake in the 4th century. A. C. originating a lake, transformed in the 19th century by the Bourbons into the current port. In Ischia there is the symbol of the island, the Aragonese Castle, which we will discuss later. Casamicciola Terme, on the other hand, occupies the northern area, between the sea and the hills, and is characterized by the presence of important villas with gardens, as well as by numerous spa facilities. Lacco Ameno is also well known for its thermal waters and for the characteristic mushroom that stands out on the sea, which almost gives the impression of being a sort of lake. Lacco is also rich in archaeological finds and early Christian vestiges.

Forio, on the other hand, is one of the places most loved by foreign tourists for the poetic union between sea and hills, between natural beauty and anthropic action. And it is particularly famous for the thermal waters of Citara and for the many defensive towers that make its landscape unique. Serrara Fontana, on the other hand, occupies a more internal area of ​​the island, and offers you visitors a long series of breathtaking panoramas. Finally, the last town, Barano, is mainly agricultural in nature, even if there are maritime views such as Maronti beach or moments of lively folklore such as the 'Ndrezzata, an ancient warrior dance.

This brief description of the island prepares you for the next leg of your journey. You will know with us the main attractions of the pleasant island of Campania.

The main attractions of Ischia: what to see and what to do

Let's start from the sea. Also because with the intensification of the summer heatwave, taking a nice refreshing bath is really a cure-all, and, luckily for you, Ischia offers numerous beaches. Let's find out some of the most important and prestigious. In Forio, for example, there are two really unmissable: La Chiaia in Forio d'Ischia, among the largest and most popular of the whole island and Cava dell'Isola, a little more "intimate" and reachable thanks to a set of steps. For a "Caribbean bath", however, we recommend the Bay of San Montano in the municipality of Lacco Ameno: here, in fact, you will find clear and crystal clear water and a golden coastline with fine and soft sand, which will lead you with your imagination to "overseas waters". Finally, the aforementioned Maronti beach in Barano is a must, which can also be reached from Sant'Angelo. Here you will find a characteristic dark volcanic sand and thermal springs that flow directly into the sea, making your bath pleasant and healthy.

Speaking of thermal springs, we suggest you to see the Nitrodi spring, where a miraculous water with a thousand properties flows. In fact, by drinking Nitrodi water it is possible to treat gastritis and ulcers and improve the functioning of the urogenital system. What about the beneficial effects it has on the epidermis? Try it, and you will come out with a smooth skin like that of a child!

But Ischia is not just sea, beaches and beneficial thermal waters. In fact, not to be missed are the many testimonies of its rich and layered history. Above all, the aforementioned Aragonese Castle, the cover image of the island, its authentic and inimitable flag. Built by Alfonso of Aragon in the fifteenth century on an islet already occupied by the Greeks centuries ago, the Aragonese Castle will allow you to make an exciting journey through time.

Before ending your tour, however, and dedicating yourself to the delights of the palate, such as the typical Ischia-style rabbit, and "diving" into the intense nightlife, we recommend you visit the church of Santa Maria del Soccorso in Forio, authentic museum of marine ex-votos, moving testimonials of the "people of the sea".

Ischia, as we could see, is a very large island that offers many attractions. Our advice to visit Ischia at best is to move between the various municipalities not to miss any of the beaches and attractions it has to offer. To move you can opt for the public transport service of the island, but to not have limits of time and space and to visit every corner in comfort, the ideal is to move by car. There are two alternatives: arriving on the island by taking your own car or looking for a car rental in Ischia. Renting is certainly the most convenient alternative. We recommend you to rely on the Calise Car Rental, a real institution on the island, which is located in the town of Forio and that, among other services, offers the possibility to rent a scooter or a bike. It is therefore an ideal choice for any kind of tourism. In this way you can visit the island in its entirety, without stress and without running the risk of missing any of its wonders. In short, to learn more visit the website of Calise Car Rental. We wish you a good trip. Calise Car Rental❯