10 Things to do in Bologna

At the bottom of Arengo Tower, majestic Voltone del Podestà archway connects Main Square on one side with via Rizzoli, on the other. This is where a most particular acoustic phenomenon takes place: transmission of sound from one corner of the archway to the opposite one. This is literally a wireless telephone system: the sound reaches the top of the ripped vault, descending on the opposite side. It is possible to be having a full conversation here, standing on the opposite corners of the vault, without others being able to be listening to it. Tradition says priests came here to confess plague infected people, staying at the two opposite corners of the structure, using the ‘phone without cables’ system to talk to, yet not coming in touch, with sick ones.

Up until 60 years ago, Bologna came with a 66 miles long net of artificial canals and streams flowing into city centre. Built in 12th century, the canals were intended to be providing energy to silk mills spread all across the town. Still flowing underneath the city, the canals have been paved ever since the 50s in order to be developing traffic conditions and creating parking facilities. There is only one place all across town where is possible to be having a glimpse of the canals: this is a small window located under Via Piella portico, meant to be opened up in order to enjoy a romantic view all over the Reno River Canal.

8 - The longest sundial in the world

Those willing to be having a glimpse of the longest sundial all over the world may be finding it right into St. Petronius Basilica. Spanning over 67 meters length, the sundial was built by renown, local astronomer Giandomenico Cassini in 1657 on the floor of the left nave of the Basilica. It corresponds to the six hundred thousandth part of Earth’s circumference. Every day, 12 am (or 1 pm, daylight saving time) a sunbeam pierces through the roof of the Basilica and it is projected on the meridian line, providing evidence of the day of the year. 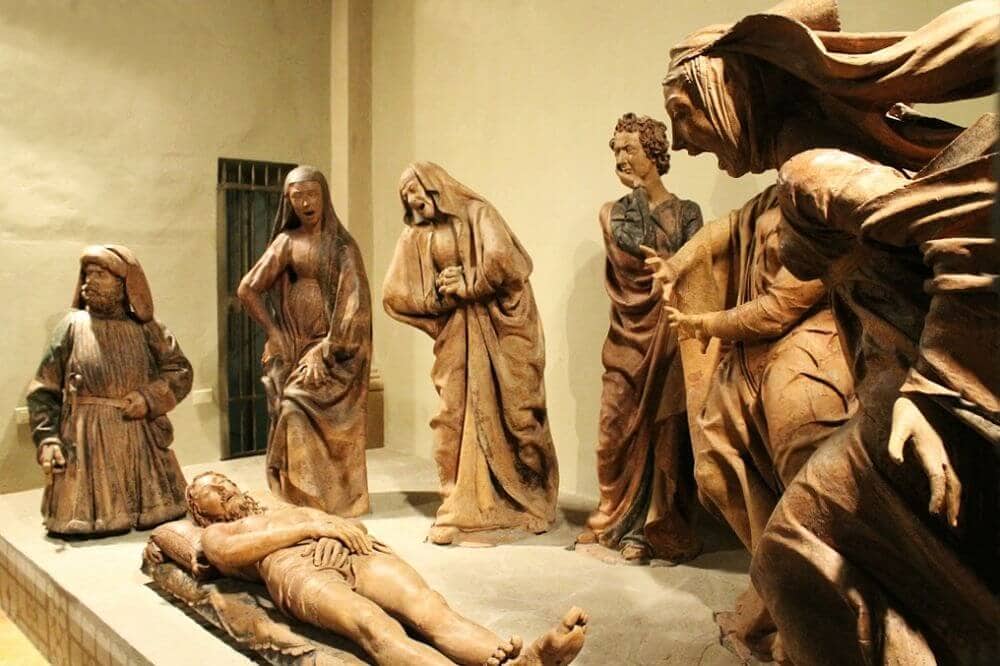 When Italian poet and writer Gabriele D’Annunzio saw Renaissance Lamentation over the Dead Christ terracotta gruppo by the sculptor Nicolò dell’Arca in Santa Maria della Vita Sanctuary, he properly described it as a ‘petrified scream’. Made of seven terracotta full size figures, still coming with original colours, the 1463 group indeed still strikes for its stunning naturalism and for bold realistic representation of characters’ pain and upset.

6 - The most ancient campus building all over the world

Bologna is ‘the learned one’: this is where University system was invented over one thousand years ago, later to be exported all across the world. Having been founded in 1088 – though sources proving classes been held even earlier then that – that is the most ancient university in the Western World. Up until 1563 there was no unified seat for the Bologna University. It was the Popes, Lords of Bologna at the time, gathering all the teachers into Archiginnasio Palace, in order to be controlling them. And this is how they created the very first campus of history. The Palace was used up until early 19th century, now being seat of the historical library of the town. Still open to visits is the ancient Anatomical Theatre room, used for dissections over corpses: this is how medicine used to be taught, in the past. Take a few minutes to explore the six thousand students’ crests still preserved in the Palace!

5 - A walk to FICO EatalyWorld

In 2017 FICO EatalyWorld opened its gates in the suburb of Bologna: the biggest agricultural park in the world where the Italian food excellences are shown. The “Fabbrica Italiana Contadina” (literally Italian farmer’s factory) offers many experiences related to food and its industry. You can start with the visit to the productions of the 40 food factories in the park, or to the two hectares of fields and barns with more than 200 animals and 200 cultivars, continuing then with a tasting at one of the several restaurants. This is a very suggestive experience if you want to learn more about the italian biodiversity. In Bologna you can find around 40 km of porticoes: 3,8 kilometres of those constitute the longest portico in the world (slope 18%), which links San Luca Sanctuary to Bologna city centre. Sport, devotional reasons, or just a nice walk tasting a gelato are some of the motives to climb up to the Sanctuary to enjoy the view over the city and the tallest peaks of the Apennines. 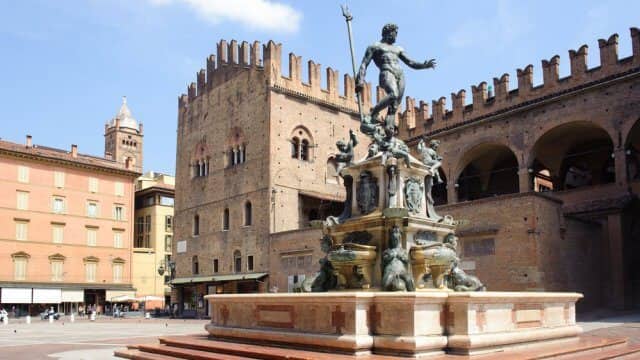 The Fountain of Neptune is one of the most important monument in Bologna. An imposing sculpture ( 3,30 meters tall and weight 2.200 kilograms, almost 5.000 pounds), made by the sculptor Giambologna in 1564 by the order of the Pope Pius IV. The god of the sea is represented while keeping the trident in his hand to calm the waves of the sea. Around him there are many little angels, tritons, mermaids and water jets which are creating a spectacular scene. The legend says that Giambologna wanted to create a figure with bigger genitals against the Pope’s will. Giambologna decided then to design the sculpture in way that if you look Neptune by the back side from via Indipendenza the thumb of the left hand looks like a penis in erection. For the students who want to pass an exam, it’s necessary to walk twice counter clockwise around the fountain, like the sculptor did when he was thinking over his opera.

Bologna the fat city: if you are visiting the town you can’t miss the ultimate gastronomical experience: an excellent dish of tortellini (hand fresh made pasta filled with meat and Parmigiano Reggiano cheese) served in capon broth. You can taste them at the best restaurants in town, buying them in the food shops of the city center, or learn how to make them at one of the cooking schools of the area. Not only tortellini, but you may also appreciate mortadella and the other delicious cold cuts in the food district area, known as Quadrilatero. Close to Piazza Maggiore, the Quadrilatero have been the food shopping area since the medieval time: a maze of narrow streets where you can breathe the special atmosphere that just a market can offer.

The two towers complex formed by the Asinelli and Garisenda towers are the truest symbol of the whole town and its most popular sight. Built between 1109 and 1119, the both of them are heavily leaning. Climbing up the steep 498 steps and the 97,20 meters of Asinelli Tower is just the most incredible Bologna experience ever: prepare to enjoy a memorable view all over the city and the hills surrounding it from its top.