The Carnival of Viareggio: an amazing experience in Tuscany

Every year one of the most spectacular Carnivals in the world is celebrated in Viareggio, on the Tuscan seafront. Since its first edition in 1873, the event has grown to become famous everywhere for its majestic allegorical floats, a whole month of day and night parties under the blessing of the two symbolic masks: Burlamacco and Ondina.

THE HISTORY OF THE VIAREGGIO CARNIVAL: SOME DATES

It was 1873 when the high society youth of Viareggio had the idea of staging a parade to celebrate Mardi Gras. From then on, the fame of the Carnival in this Tuscan town grew in parallel with that of its allegorical floats, which were increasingly majestic, built in wood, scagliola and jute by the “Maestri Carristi”. In 1921, the first official song, which is now the event's anthem – “Coppa di Champagne” - was born, and in the same year a band enlivened one of the floats with its music for the first time; in 1923, the Pierrot was the first wagon to move its head and eyes and, two years later, the papier-mâché technique made it possible to build increasingly imposing constructions. After the stop of the two world wars, the Carnival restarted, in 1954 it was broadcast on the newborn RAI (Italian Radio Television) and four years later its fame reached farther and farther afield thanks to Eurovision.

This is how the Viareggio Carnival became international, an event that attracts audiences from all over the world and offers a month of celebrations, parades and various events. The 2021 edition, due to the Covid-19 pandemic, will take place from the 18th September to the 9th October. 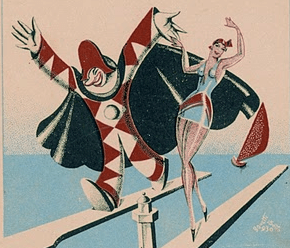 Every self-respecting event has its protagonists: Burlamacco and Ondina both appeared for the first time on a poster in 1931 and they always stayed together, as the symbolic masks of the Viareggio Carnival. Burlamacco was born in 1930 from the imagination of the painter, graphic artist and set designer Umberto Bonetti and, from his own pen, the following year Ondina came to life, in the guise of the typical summer beach lady. The artist wanted to create a character that would encapsulate the two souls of Viareggio life: Carnival and summer. This is why Burlamacco looks like this: he is inspired by the masks of the “Commedia dell’Arte” but is dressed in a chequered suit that picks up the white and red of the beach umbrellas on the coast.

So great is the importance of Burlamacco and Ondina that in 1998 the “Burlamacco d'Oro”, a prize awarded by the Carnival Foundation, was instituted. This is the award that Viareggio gives every year to men and artists from the world of entertainment and communication, while for women in the same sector there is the “Ondina d’Oro” award.

THE LADY OF THE FLOATS: PAPIER-MÂCHÉ Wondering how the Viareggio Carnival floats are made? Those mammoth structures are made of papier-mâché, up to 20 metres high and about ten metres wide, and they advance through the crowds on the Viali a Mare to amaze them with their scenic impact, their movements and their colours. All of this, in reality, was created from a few simple things: clay models, plaster casts, sheets of newspaper and a glue made of water and flour, as well as a lot of skill and imagination; a few ingredients which, when put into the right hands, create something extraordinary. There are more than 25 craftsmen's companies (and more than a thousand people at work) in which the master builders hand down this art from generation to generation, hoping each year to win the first prize awarded by the jury.

A STROLL THROUGH VIAREGGIO: BETWEEN THE VITALITY OF THE SEAFRONT AND LIBERTY-STYLE VILLAS

Viareggio actually deserves to be known for its beauty as well as its Carnival: it is a famous seaside locality in Tuscany with historic Art Nouveau buildings and examples of Art Deco. The pedestrian and cycle path that follows the seafront, Passeggiata Margherita, is the richest in this respect, and here, amidst the bars, ice-cream parlours and crowded restaurants, you can admire a succession of fine architecture from the early 20th century; among these, the Gran Café Margherita with its two turrets topped by yellow and green tiled domes will certainly catch your eye. The café was once Viareggio's most elegant establishment, frequented by high society and the maestro Giacomo Puccini, and now houses a restaurant, cafeteria and bookshop. Also in the area near the seafront we find the Hotel Liberty, the Bagno Balena with its vintage portal, the Clock Tower and the statue of Burlamacco.

Villa Argentina, one of the most beautiful examples of Art Nouveau architecture in Italy, and Villa Paolina, home of Pauline Bonaparte, are also worth a visit. The former belonged to a wealthy landowner of Argentine origin named Francesca Racca Oytane and offers paintings by great artists of the time and gilded stucco decorations on the ceiling and walls, as well as precious floors such as the black Belgian marble floor of the ground floor hall. Villa Paolina was the home where Pauline Bonaparte received her lover; today it houses the Civic Museums and some important offices, but its flats, used for hosting exhibitions, can still be visited. The building is a beautiful example of neoclassical style and its layout offers a new interpretation of the Roman domus, with a beautiful colonnade facing the sea and all the bedrooms and lounges facing the beach.

THE CITADEL OF CARNIVAL AND THE CARNIVAL MUSEUM

The Carnival Citadel is where the floats take shape and life: inaugurated in 2001, it is the largest themed area in Italy dedicated to masks and includes workshops and hangars as well as a large collection of historical documents. Inside, there is the Viareggio Carnival Museum, where the statue of Burlamacco welcomes visitors who can admire the models of the floats that have won prizes in recent editions and discover, among other things, the stages involved in making papier-mâché works and then have fun creating small artefacts.

“On the stage of the world we are but poor actors, and sometimes it is useful to be able to disguise our sad roles.”

The Viareggio Carnival is a big, colourful, noisy and chaotic festival that is not afraid to make fun of the world we live in, through the sharp blade of satire, and that speaks of the great themes of our contemporary world through ridiculous and grotesque representations, with the convinction that we all need levity. The posters that have presented each edition since 1925 are always full of colour, cheerful, sometimes exaggerated, as if to tell us that if you don't stop taking yourself seriously at least at Carnival, you never will.