The Palio in Italy, an ancient tradition

Besides the Palio di Siena, the most famous Palio in Italy, there are other festivals to discover. Journey through tradition and competition.

In Italy the tradition of the Palio (competition between districts of a city) is very old. Normally the challenges consisted of horses or other animals racing, but the ancient municipalities gave away more imaginative versions of this form of entertainment. The Palios have origins in Medieval times to continue in the Renaissance, until they become real folkloristic events of our times.

Let's see, therefore, which are the most fascinating Palios in Italy, starting from the most famous up to the less known. 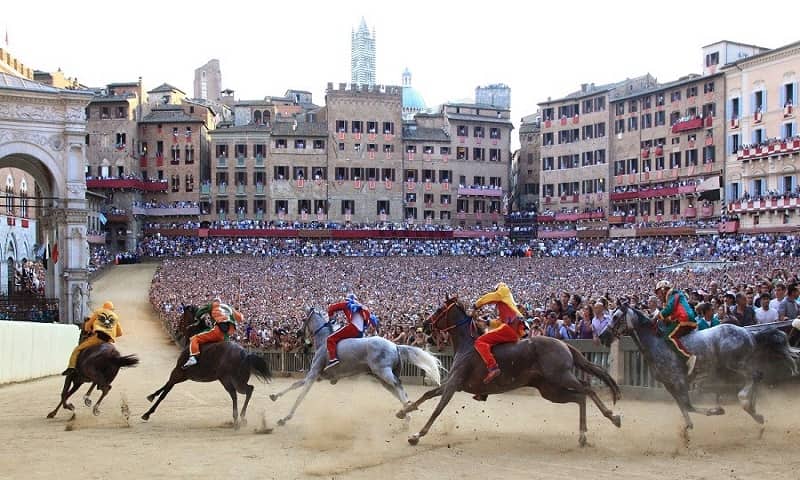 It is the most famous Palio. It takes place every summer, between July and August, in the medieval city of Siena. The Sienese citizens feel a lot about this festival, which even characterizes the city organization: each district has its own church, its own "leader" and its own identity that is defended during the equestrian joust. The 17 districts compete in a horse race, each with its own jockey, who will have to complete three laps of the track for about 1000 meters. The winner? The first to arrive, bringing honor and glory to their faction.

The Palio di Asti takes place in September and 7 municipalities take part. In the days leading up to the race, goliardic propitiatory dinners are held. The square where the horse race takes place is a spectacle of colors, music and excitement. Everything culminates in a very accurate historical procession. 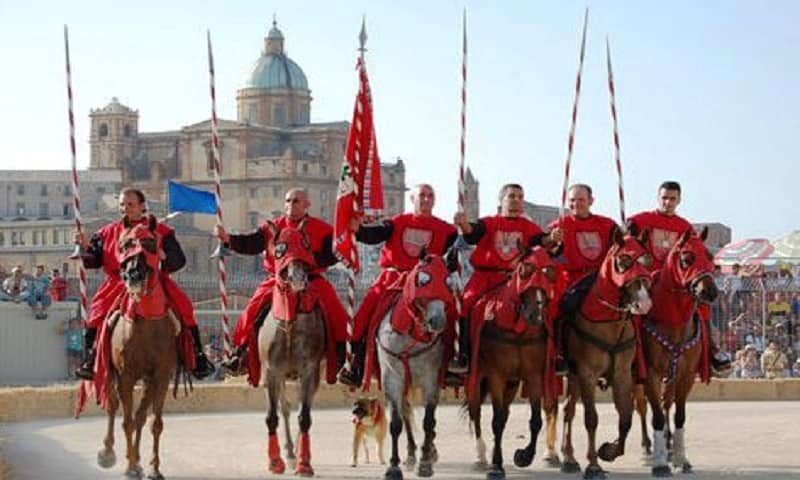 Every year, from 12 to 14 August, Piazza Armerina, in the province of Enna, hosts the infamous Palio dei Normanni. The knights of the four districts of Monte, Canali, Castellina, Casalotto enliven the medieval arena of S. Ippolito with the "Quintana", a prize in honor of Count Roger. The joust consists of 4 tests, in 3 of which the protagonist is the "Saracen" or the knight who will start at a gallop and must first hit his shield with a spear and then with a hammer. In the third test he will have to hit a circle, again with the spear, and finally throw the javelin through a ring placed on a gallows. In short, a thrilling spectacle!

It is an aquatic prize. In Rieti, there is the Velino river which welcomes a very lively race in its bed in mid-July. The palio is relatively recent, the first edition was in 1969. The representatives of the districts compete first on a pole with a stick with the aim of dropping their opponent into the water, then they compete on bicycles equipped with shovels and with floats instead of normal wheels.

The third challenge is a race on wooden boats that cross the river against the current, the fourth is a real swimming competition in the icy river. The last race, that of the tub, is always the most awaited: a competitor per district runs about 800 meters, sitting inside a tub, pushing himself with a single wooden oar trying to get the better of his opponents. 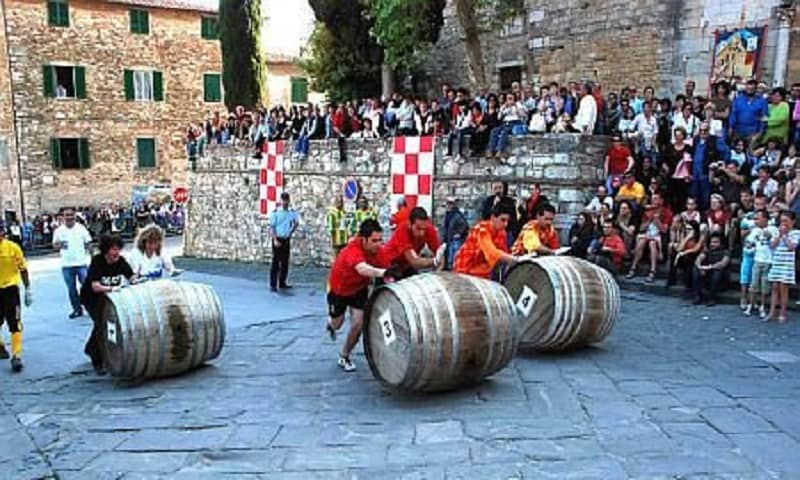 The Palio della Botte takes place among the 7 contrade of Avellino on August 12. A truly bizarre race takes place on this day. The seven districts of the city start from the Church of Monserrato by rolling a barrel of almost 2 quintals with a bar. The tiring path of about 450 meters along Corso Umberto I is even uphill! The goal to be achieved, the so-called "promised land", is represented by the Bellerophon Fountain.

It is one of the oldest palios in the world. It usually takes place in May between the eight local districts (San Giorgio, San Paolo, San Giacomo, Santo Spirito, Santa Maria in Vado, San Luca, San Giovanni and San Benedetto) within the medieval city walls. The horse race with jockeys representing the districts is accompanied by the famous historical parade that winds its way through the alleys of the beautiful old town of Ferrara. 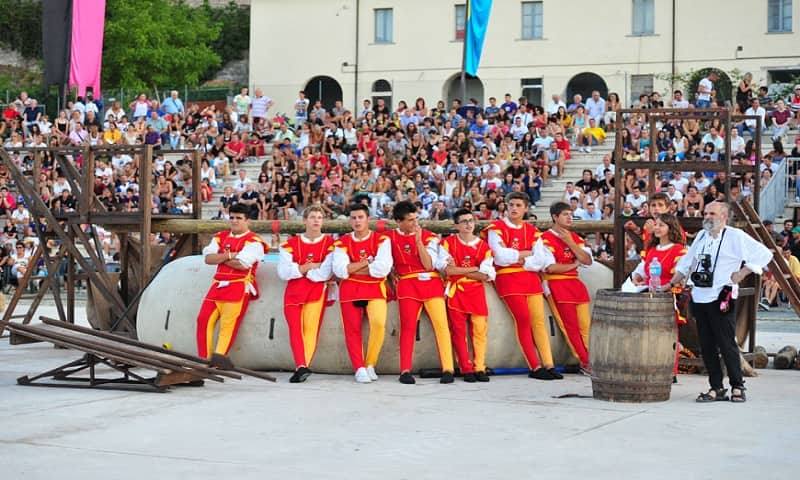 It takes place in Cagli, in the province of Pesaro Urbino in mid-late June. This historical event is dedicated to the city patron: Geronzio. The palio is held between the 4 districts (S. Agostino, S. Andrea, S. Angelo, S. Francesco), which face each other with tests of dexterity by playing with 54 boxes depicting different arts and crafts. It is played with dice, if one of these is thrown on the goose box, the score doubles. All this is accompanied by music and themed goliardic activities!

Even Dante talks about this palio in Canto XV of Hell. The name of the festival derives from the Green Drape which was the prize reserved for the winner among the runners on foot. Inaugurated around 800 years ago, this is the oldest organized race in the world. In the most romantic city in Italy, Verona, which is also the backdrop for the famous Romeo and Juliet. The Palio del Drappo verde takes place on the second weekend of June.

Little known but certainly very old Palio. This event has even given its name to the town where it takes place, Palo del Colle. It consists of a skill competition between jockeys who must stand up on a running horse and pierce a bladder (a balloon full of water, but in ancient times it was a turkey). The winner, representing a district of the town, is celebrated during all the Carnival celebrations. Not surprisingly, the Palio takes place on Shrove Tuesday.

In all these events, the competitions are accompanied by beautiful parties with medieval music and typical dances. A way to go back in time and enjoy the genuine student spirit of our ancestors. These palios allow us to relive the emotions of the past with the same enthusiasm, it is worth being part of it and getting involved at least once in life!